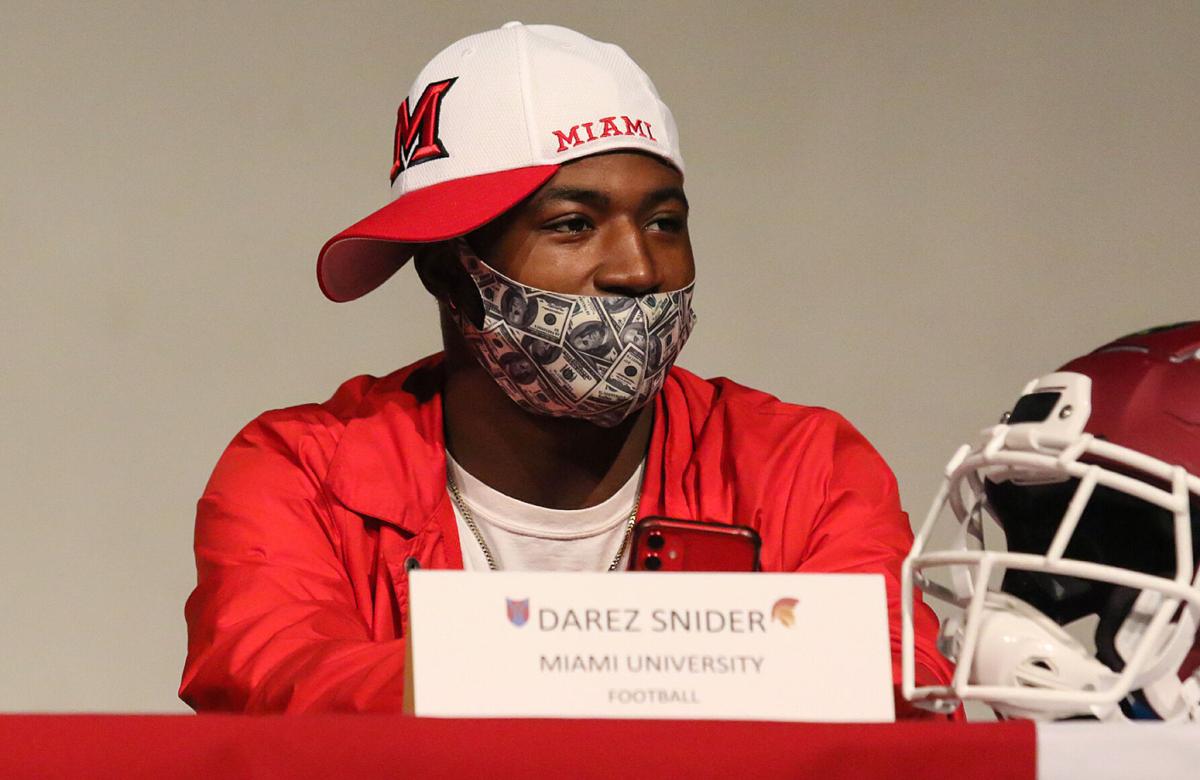 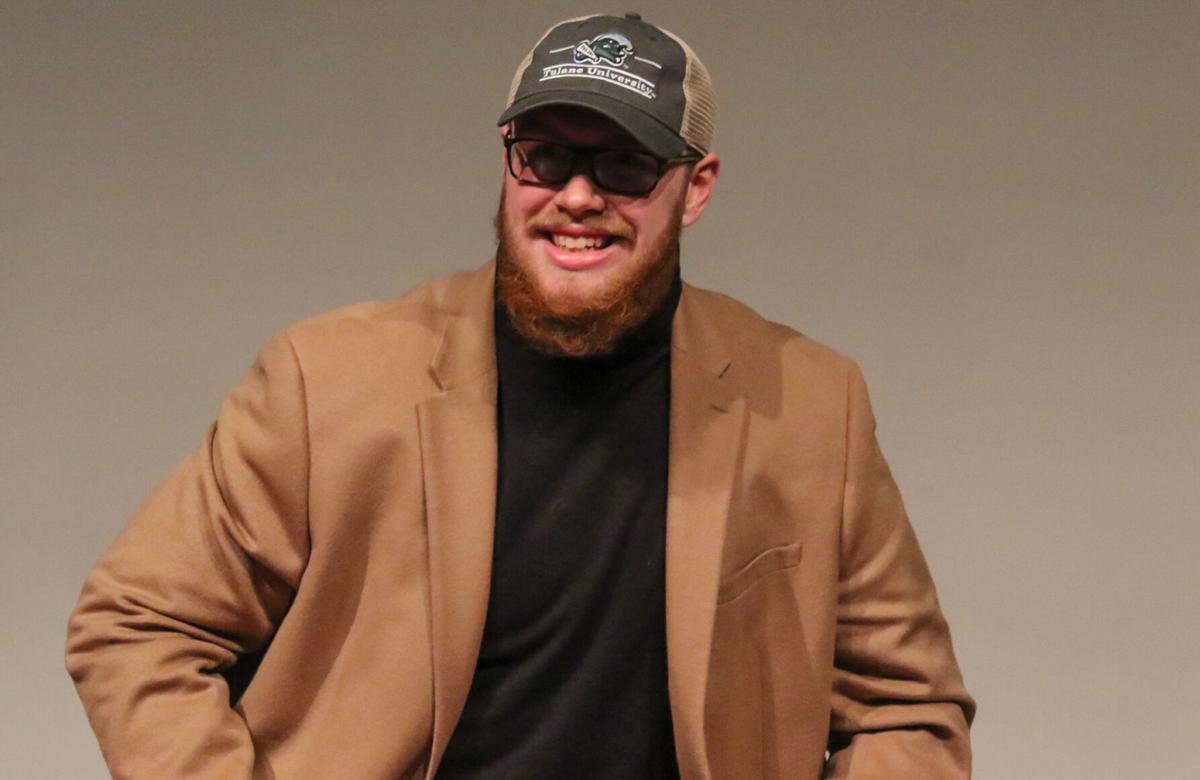 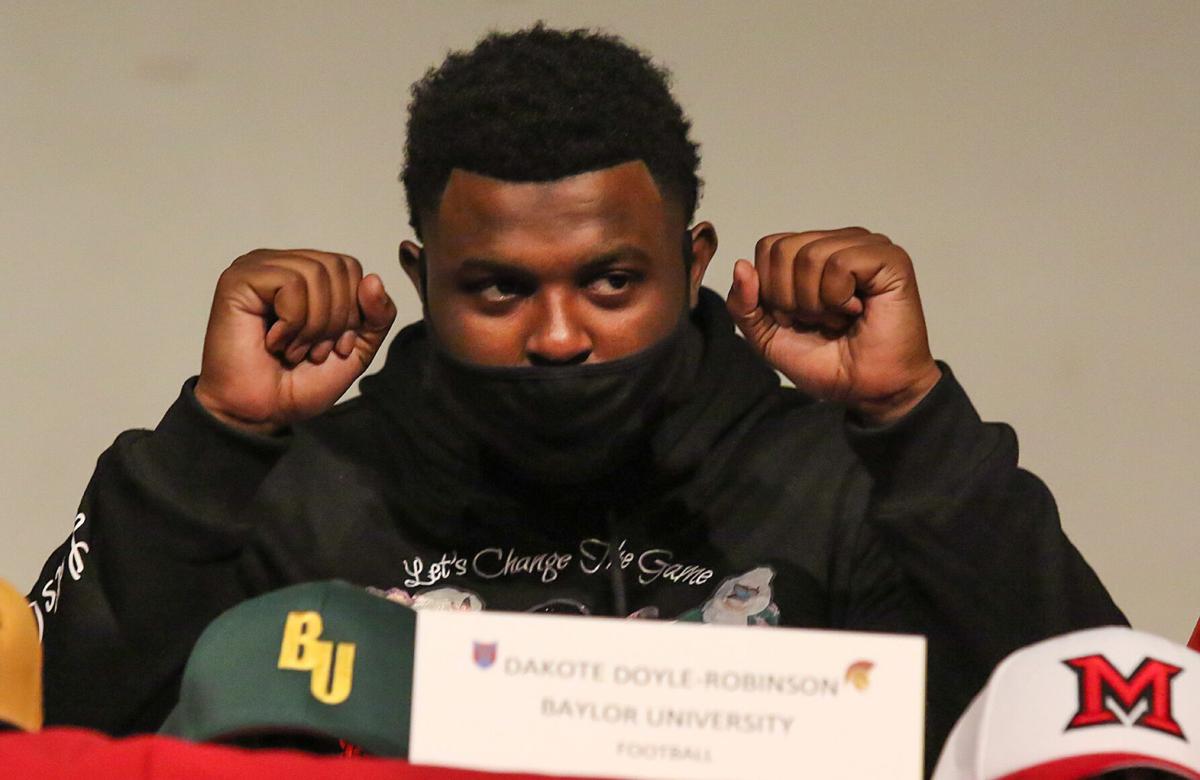 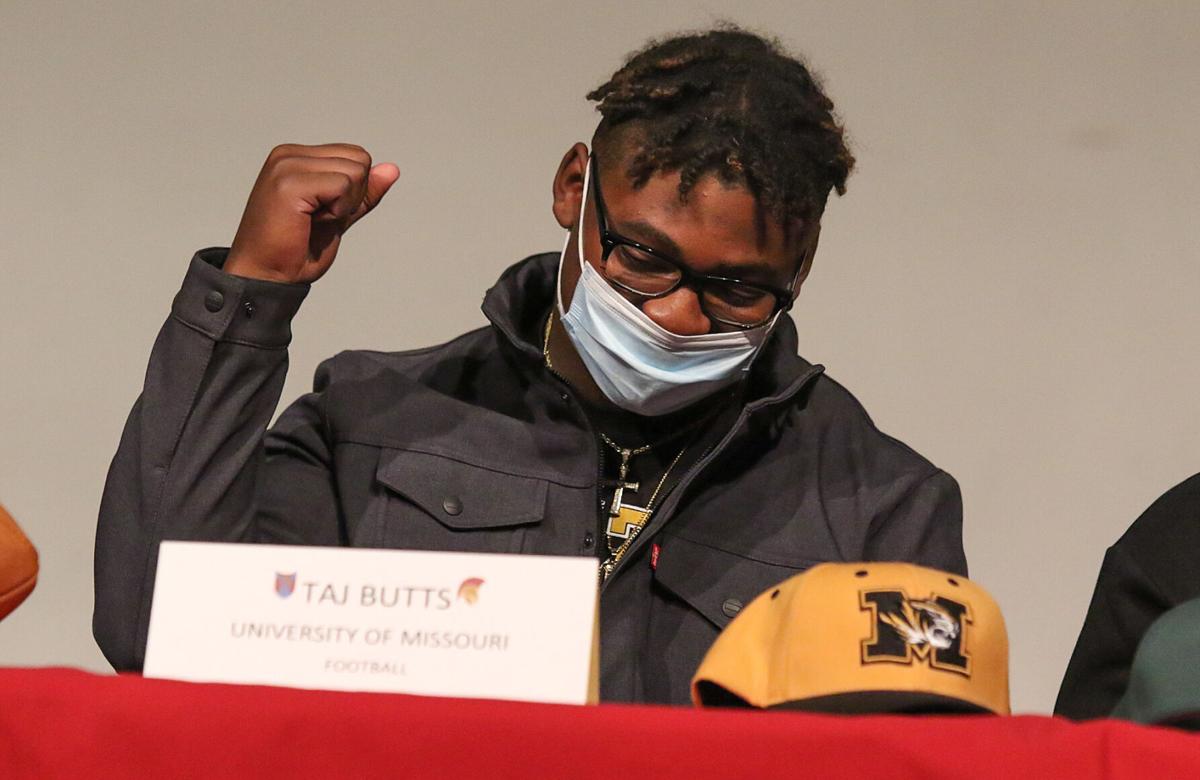 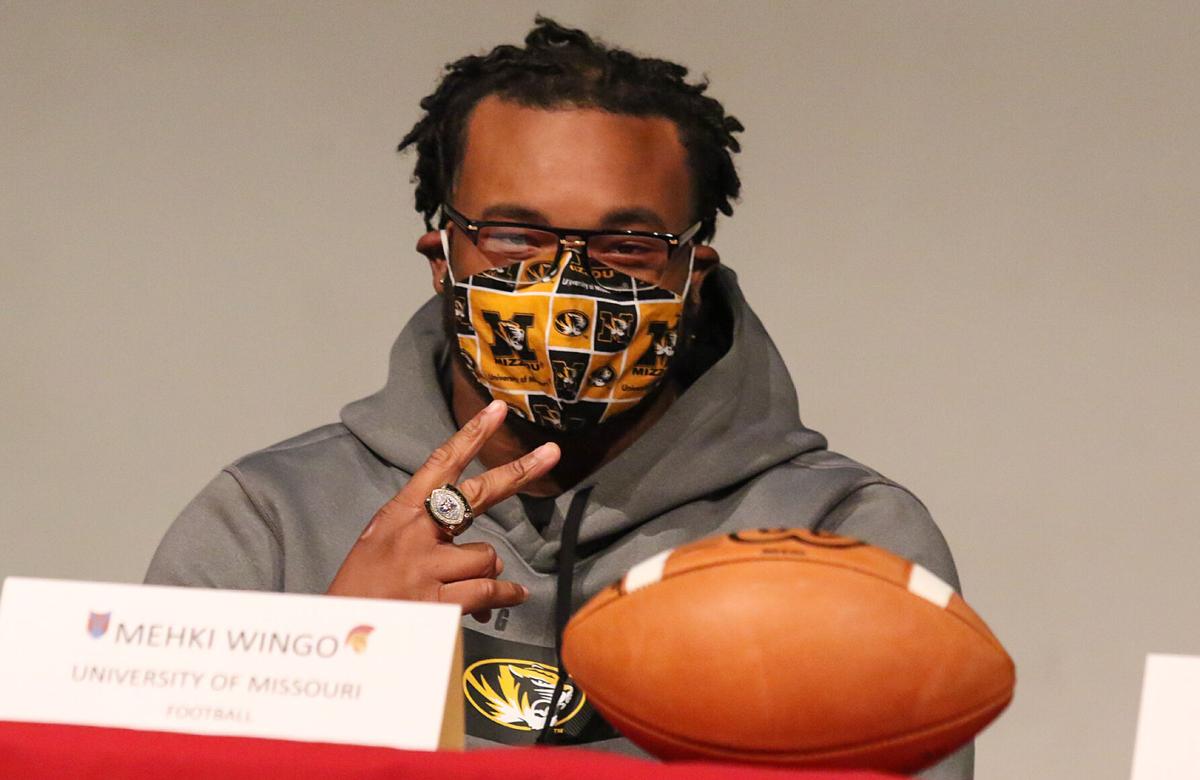 De Smet football player Mekhi Wingo celebrates after being one of two De Smet players, along with Taj Butts, to sign a national letter of intent with the University of Missouri-Columbia on Wednesday, December 16, 2020 at De Smet Jesuit High School in Creve Coeur, Mo. Paul Kopsky | STLhighschoolsports.com 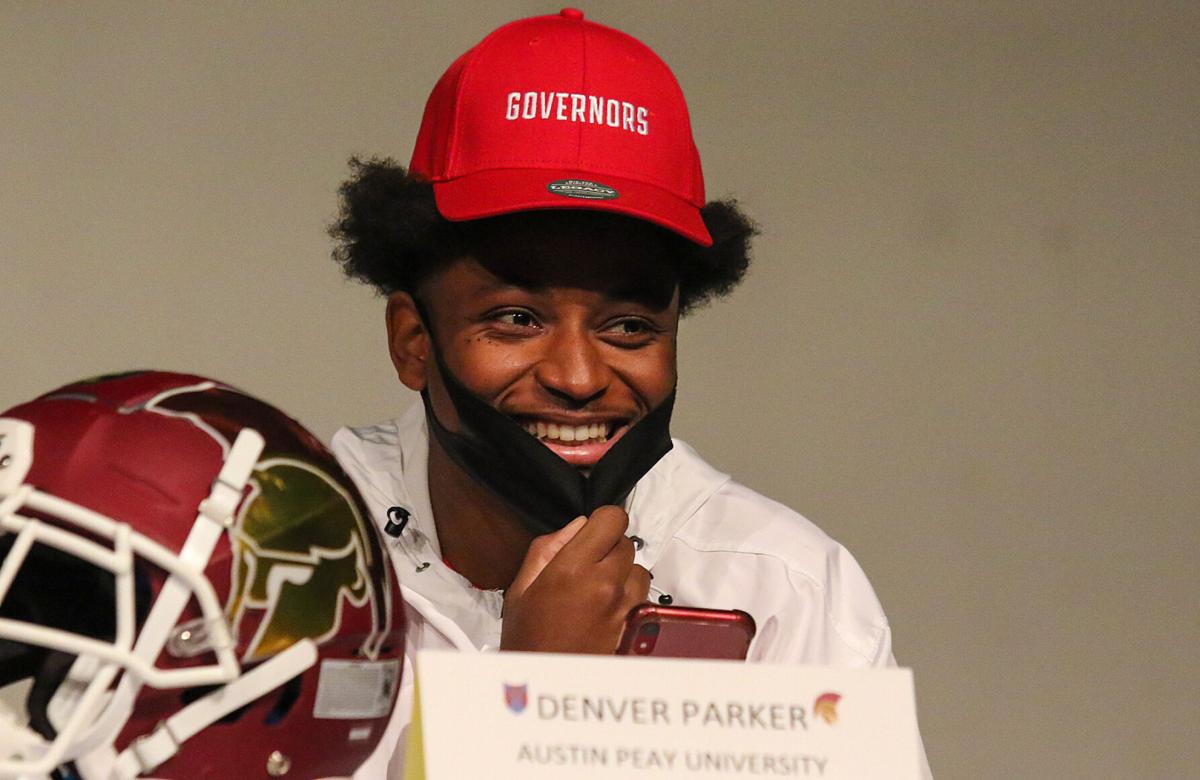 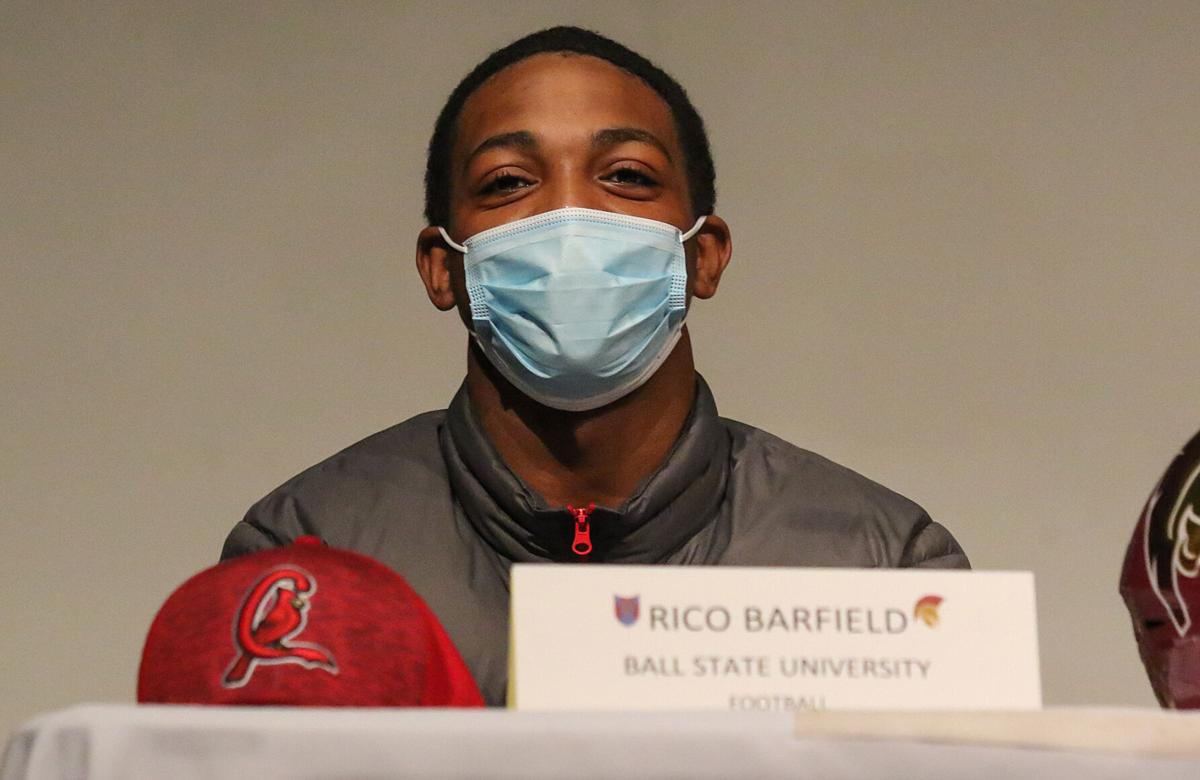 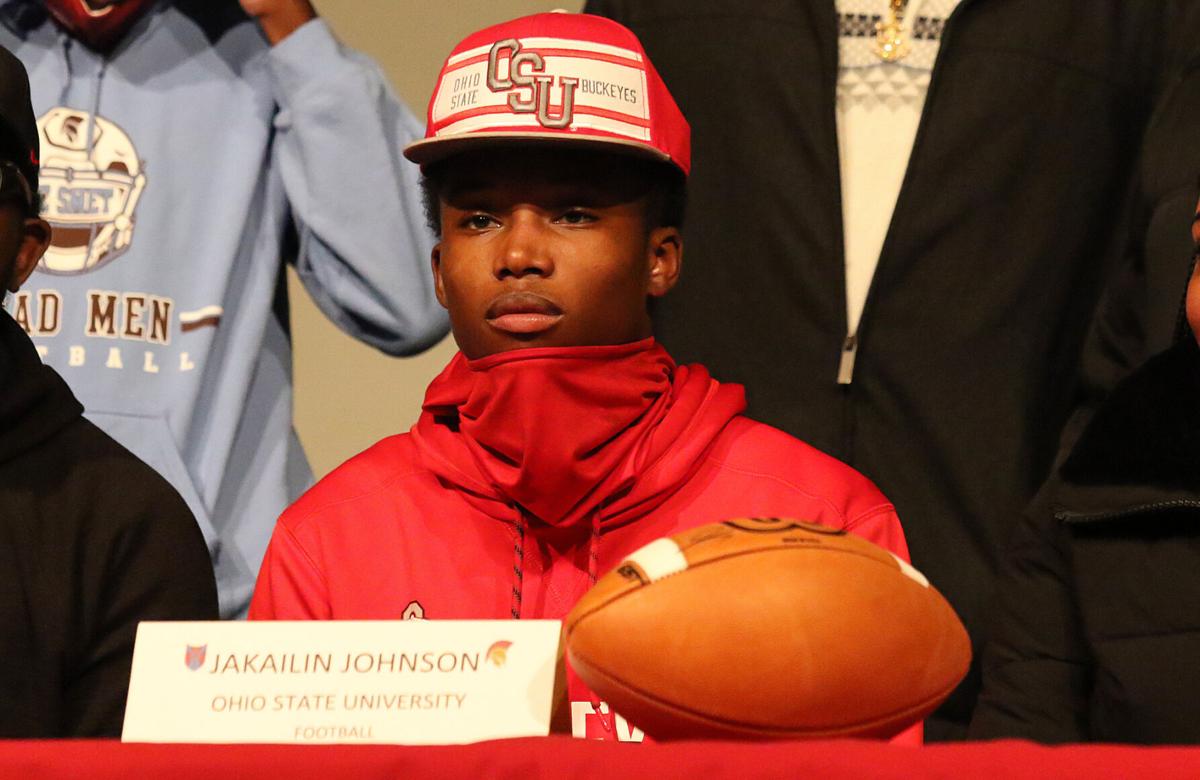 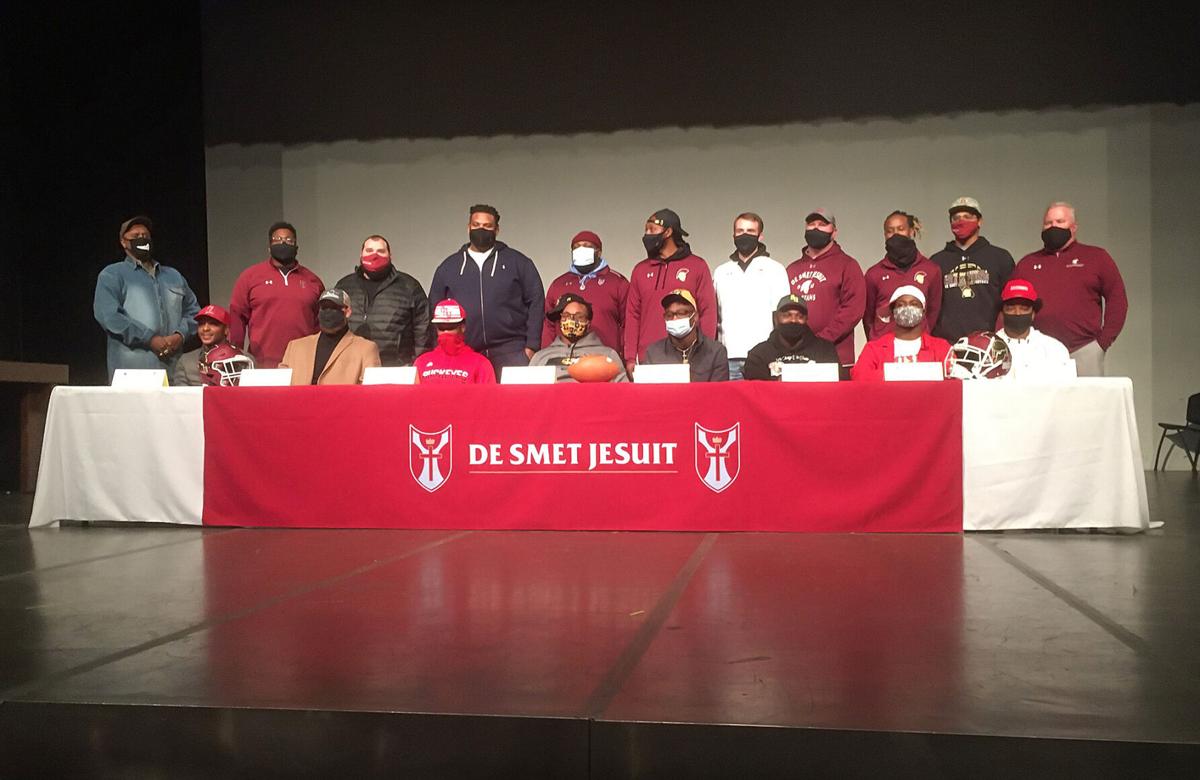 CREVE COEUR — In one of his first acts as De Smet football coach, Robert Steeples held a meeting with the parents of the players on his team inside Hunter Theater.

He asked the group a simple question - What percentage of high school football players earn NCAA Division I college scholarships?

Steeples was greeted by a wide array of answers.

He then flashed the photo that would come to define the De Smet football program.

“I’m not a statistics coach, I’m a football coach and my job is to push (my players) to put actions behind their aspirations,” Steeples said.

A trio of running backs, Taj Butts (Missouri), Darez Snider (Miami, OH) and Rico Barfield (Ball State), each bought into the plan to forego personal statistics and share the carries in the crowded De Smet backfield.

“We didn’t count carries, whoever was up was up and we trusted the next guy was going to get the job done,” Snider said.

Barfield led the Spartans in carries and yards as a freshman. He welcomed the sharing of the workload his sophomore season.

“We knew the (time share) was going to happen at some time and we knew when it did, it was going to help us all out in the long run,” Barfield said.

Steeples remembered telling his trio of talented backs about the plan of putting the team ahead of personal glory. He was impressed that the group needed very little convincing.

“They bought in with no expectation of what it would mean to them personally and it inspired a lot of guys around them,” Steeples said. “Their respect for each other overtook any jealousy or animosity and it paid off. They’re all going to the next level and fairly healthy as well.”

Snider and Barfield will go from backfield mates to league rivals in the Mid-America Conference, something they talk about often.

“We’re going to go hard against each other and we’re going to want to showcase our talents," Snider said. But at the end of the game we know that we’re family."

The offensive line is by nature a selflessness position and Hutson Lillibridge, who is headed to Tulane University, is grateful to have had the chance to carve out running lanes for the three backs.

“It’s a huge sense of pride. That will always be a little feather I have in my cap. Those guys make me look good and I make them look good - it’s a symbiotic relationship,” Lillibridge said.

At Tulane, Lillibridge is looking forward to the culture and cuisine that New Orleans offers.

“I don’t think there’s a better spot on the planet to get a culture that’s so rich in food and music and events. I’m really excited to become part of the community down there,” he said.

Wingo appreciated the opportunity to face off against the talented Lillibridge on a daily basis.

“Going against other D-I guys on the other side of the ball, it really challenges you in practice every day,” Wingo said.

Ohio State commit Jakailin Johnson, who received the top spot in the Post-Dispatch Super 30 recruits this season, realized a lifelong dream by moving on to the Big 10 Conference.

“I’m going to the school I’ve dreamed of since I was little. They’re known for producing great DB’s and the culture that I’ll be around for the next four years will make me feel at home,” Johnson said.

His companion in the De Smet secondary, safety Denver Parker (Austin Peay) also displayed the sacrifice and selflessness that defined this class.

Parker played both running back and defensive back at Westminster, but upon transferring to De Smet, decided to hone his craft at the safety position.

“I just wanted to focus on playing safety and not stress myself going both ways,” Parker said. “When I got here, I wasn’t the best at covering (receivers), but I really worked at it.”

Parker said his workouts with Johnson helped him get to the next level.

“You work so hard from a young age and you dream about a time like this and for it to actually happen, you really appreciate all the sacrifices,” Parker said.

De Smet football player Mekhi Wingo celebrates after being one of two De Smet players, along with Taj Butts, to sign a national letter of intent with the University of Missouri-Columbia on Wednesday, December 16, 2020 at De Smet Jesuit High School in Creve Coeur, Mo. Paul Kopsky | STLhighschoolsports.com