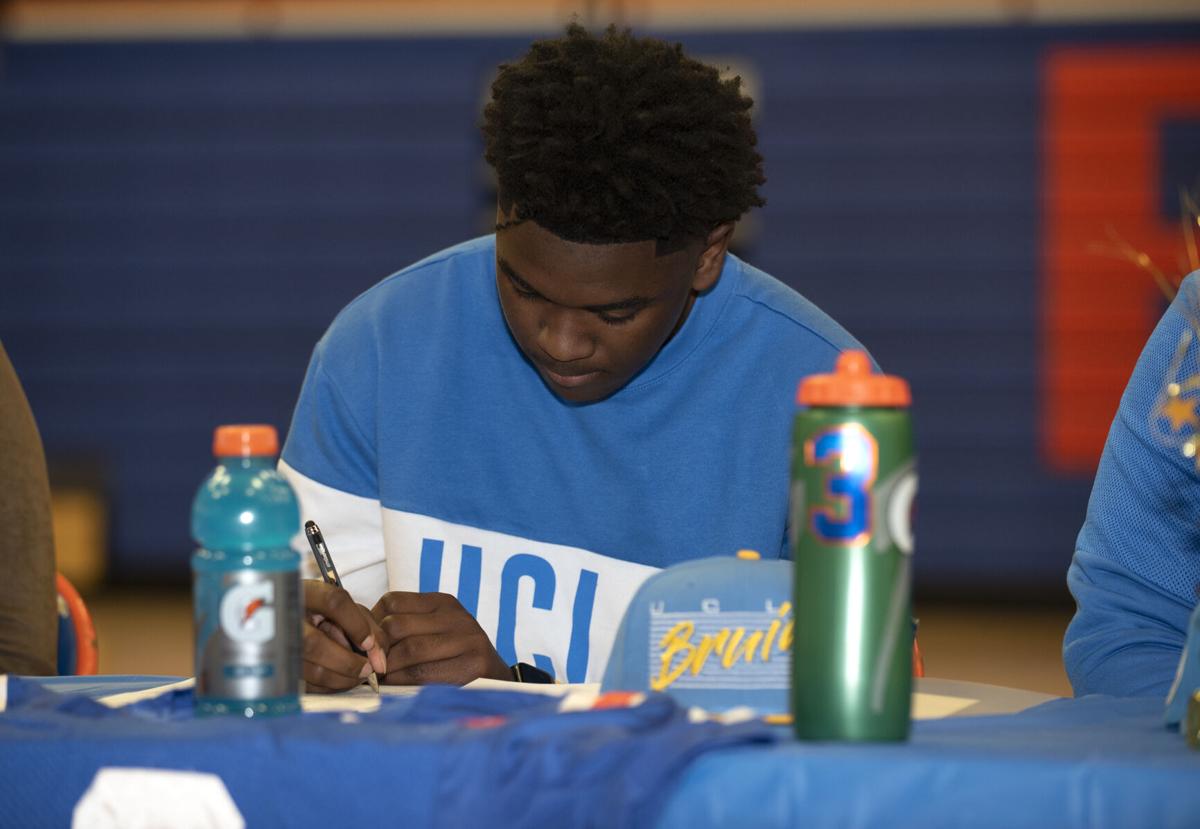 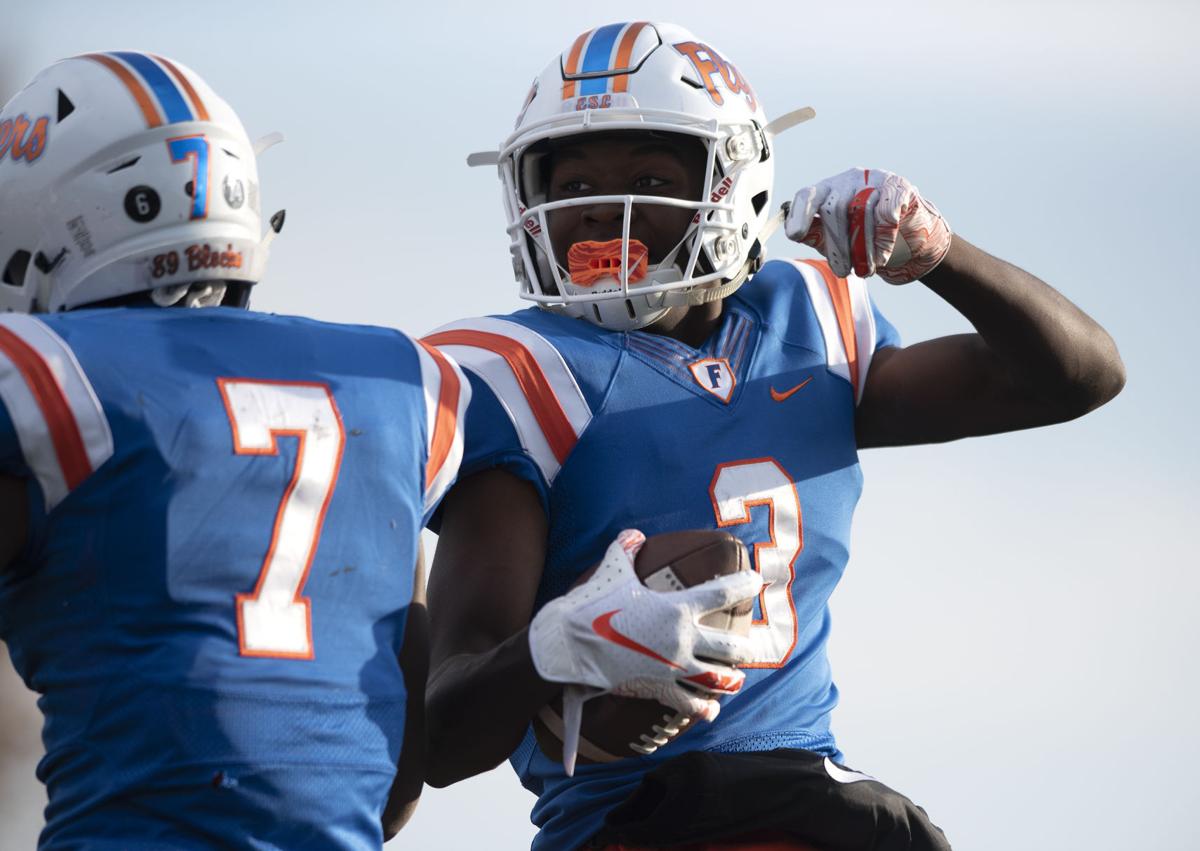 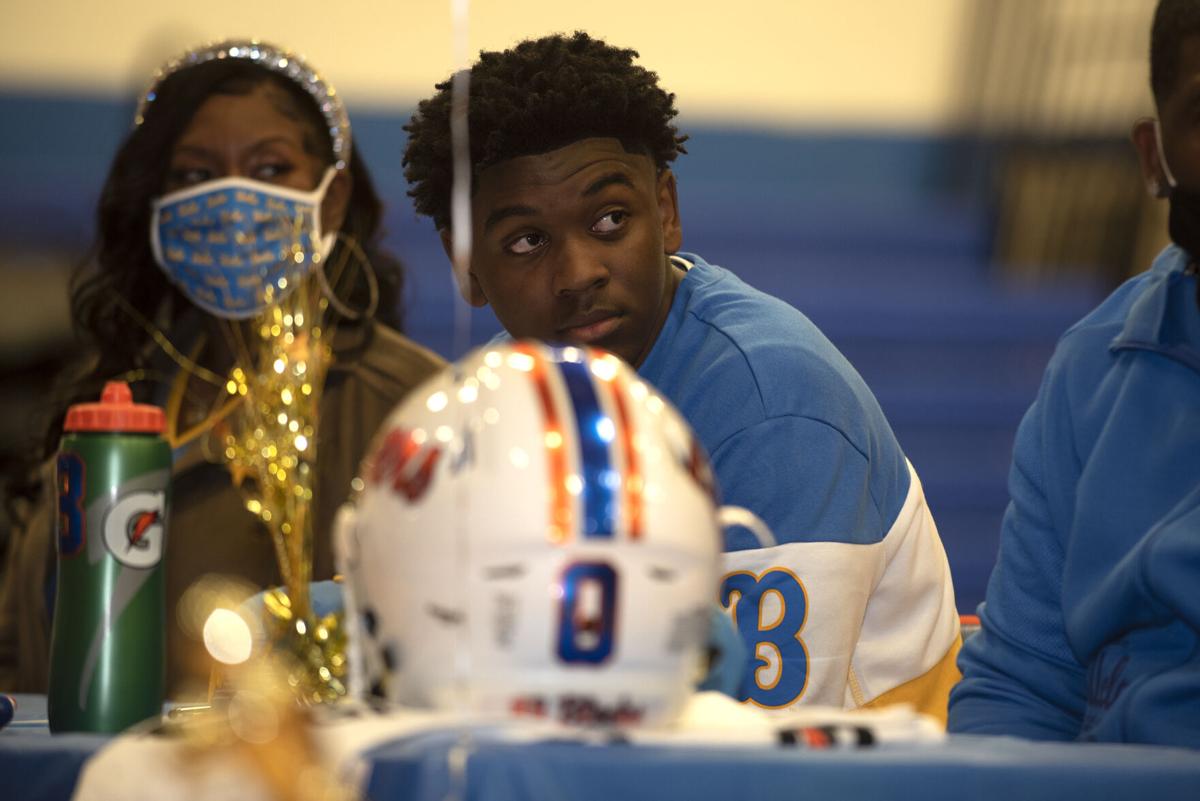 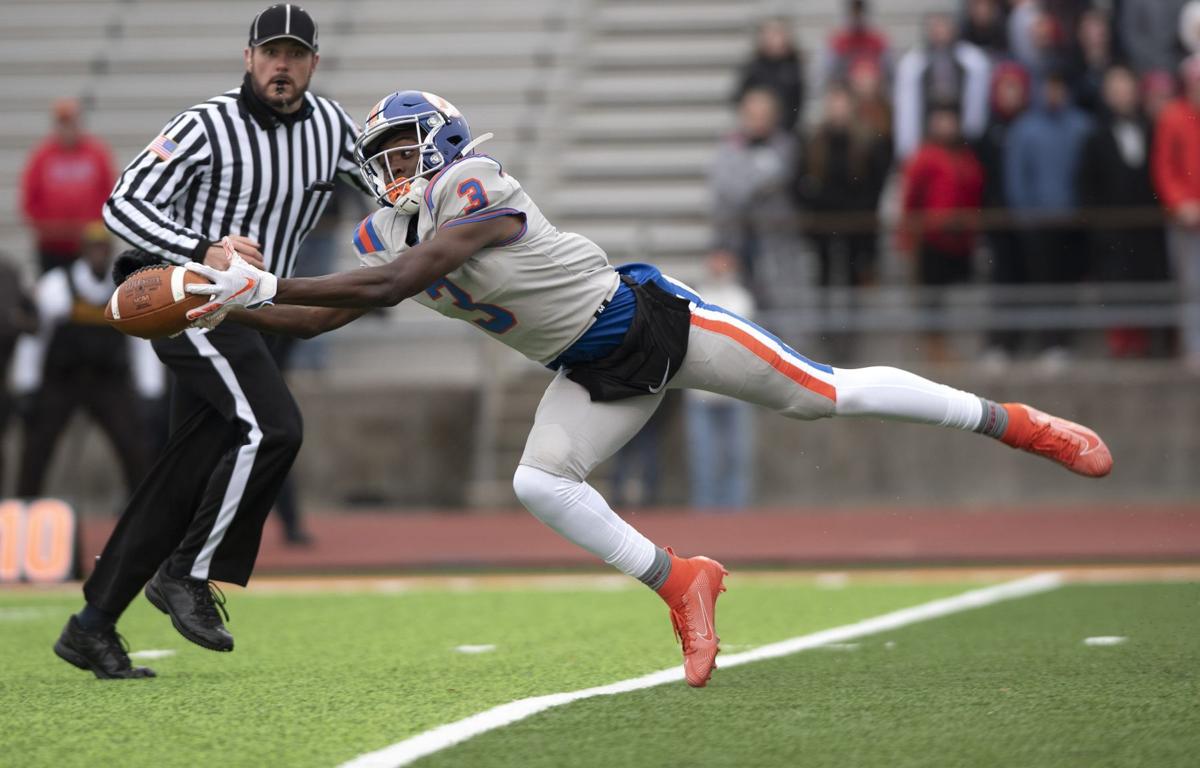 A UCLA commit, East St. Louis' Keontez Lewis caught 39 passes for 826 yards and scored 10 touchdowns as a junior to help the Flyers capture the Class 5A state title. 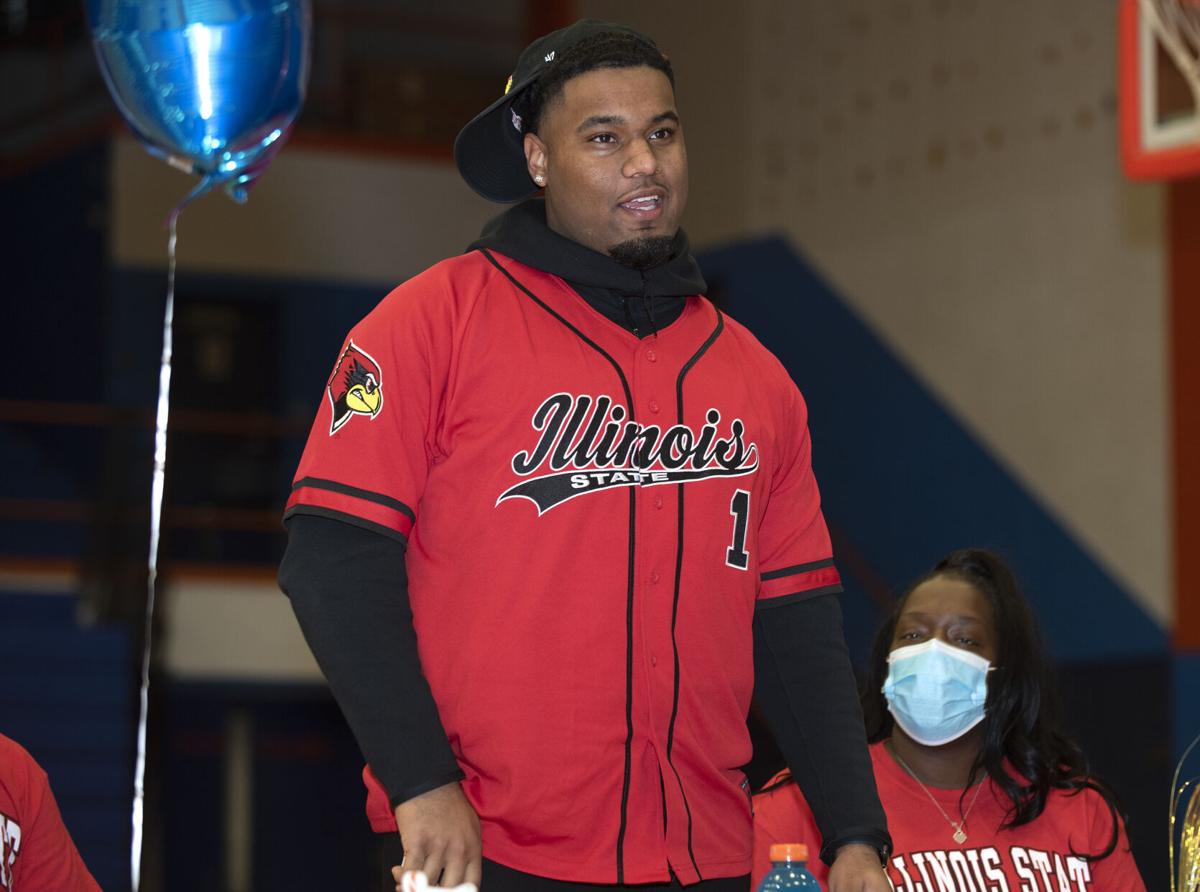 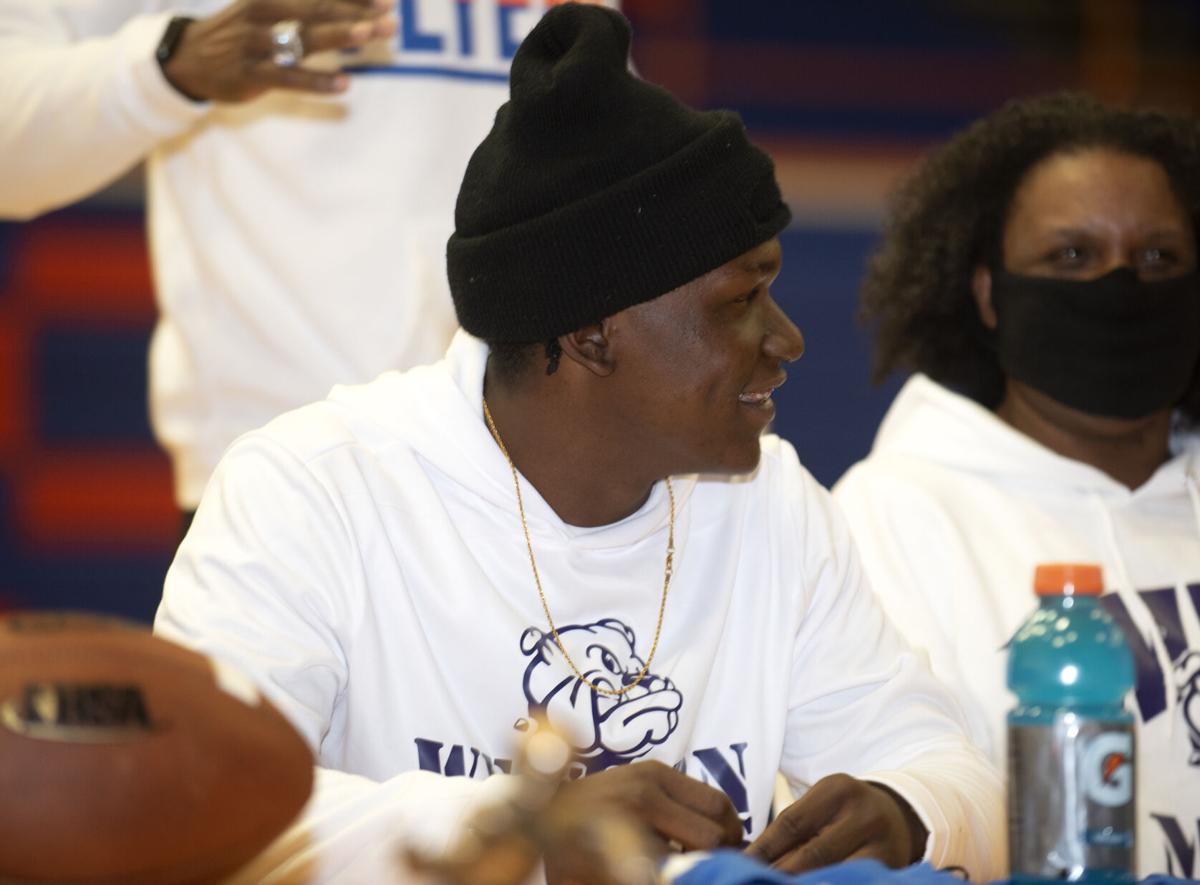 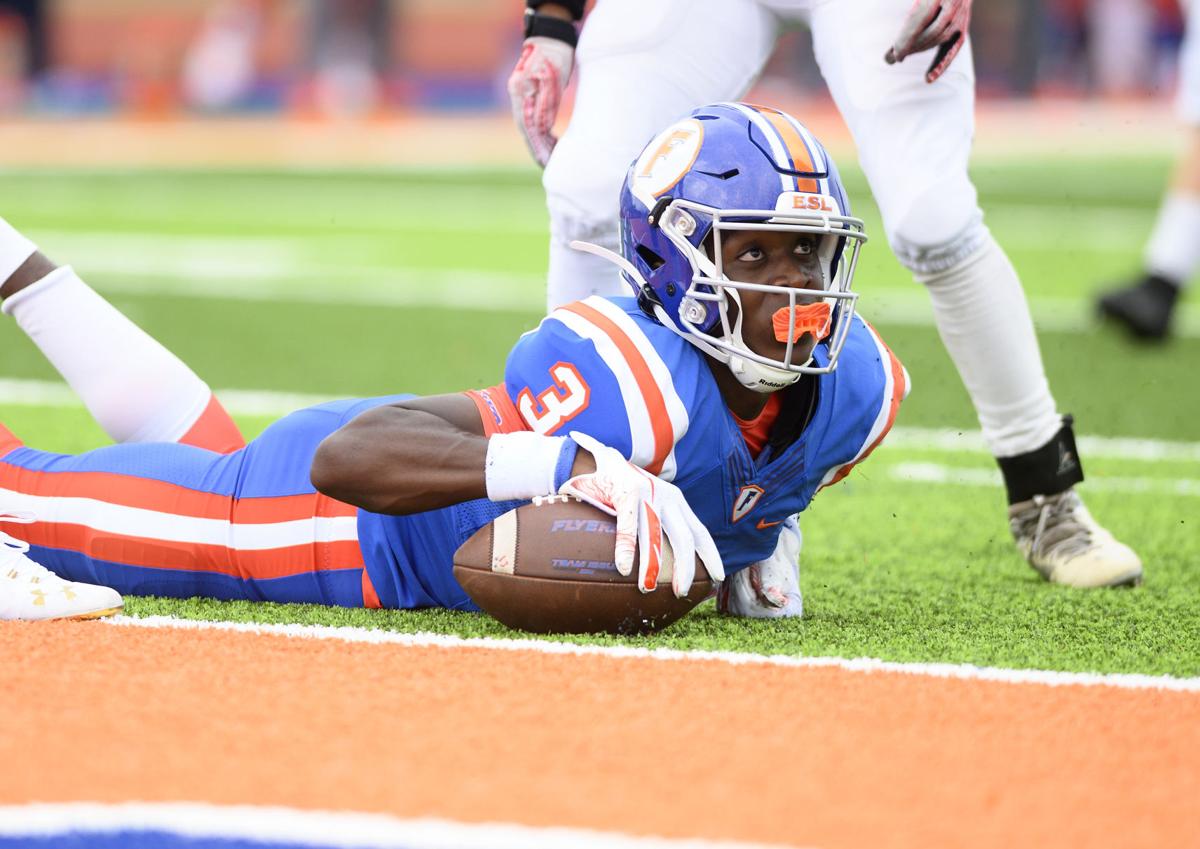 Through the computer screen and over the phone, the East St. Louis wide receiver had an immediate connection with the University of California at Los Angeles.

"I felt the love, even when I wasn't able to visit," Lewis said. "I felt that love through the zoom meeting and the virtual tours."

When Lewis finally arrived for a campus visit last year, he knew he was home.

On Wednesday, Lewis made good on a year-long commitment by signing a letter of intent to play football for the Bruins on the first day of the early signing period.

"When I took a trip to see what California is like, I just knew this was for me," Lewis said.

Lewis was part of a class of five Flyers who inked their names to paper.

The Flyers, under coach Darren Sunkett, have sent 21 athletes off to D-I and D-II schools over the last five years.

"Each kid who walks through those doors, they want to be the next guy that signs that letter of intent to play major college football," Sunkett said. "The biggest thing is the hard work these guys put in. From the first time they step in, the guys who you see sign these letters, they don't miss a day in the weight room, they don't miss a day in conditioning drills. They bust their butt every day, not just on the football field, but in the classroom."

The 6-foot-2 Lewis amassed 1,400 yards on 67 receptions and scored 19 times throughout his career. He helped the Flyers capture the 2019 Class 6A state championship as a junior.

Lewis joined the likes of Terry Beckner Jr. and Jeff Thomas, who started as freshmen.

"First you saw his mental capability, being able to pick up the offense," Sunkett said. "Once you have the mental capability if you're strong enough physically to compete at that level and the tools, which he had three qualities, it makes it possible."

Lewis received offers from over 20 schools including Missouri, Auburn, Illinois, Tennessee and Oregon.

The three-star athlete joins a program led by coach Chip Kelly, who has a reputation as an offensive savant. The Bruins currently rank 25th in the country in total offense and average over 450 yards a game. Being able to slot into an offense like that was very tempting to Lewis.

"I'm going to try to give them that playmaker that they need," Lewis said.

Terry Fenton, East St. Louis' receivers coach, has worked with his fair share of big-name receivers. Lewis and Lovett will be the sixth and seventh receivers that will be going on to the next level under his guidance.

"His attention to detail is second to none," Fenton said of Lewis. "Coach Sunkett has a great system for those guys to thrive in and Keontez's skill set, with what we do here, will definitely translate to the next level."

Lewis and his teammates were not able to defend their state title in the fall due to the uncertainty of high school sports in Illinois. But all five players have decided to graduate early and enroll in the spring semester at their respective schools.

"I just wanted to get used to everything," Lewis said. "With Illinois being so iffy with everything as far as sports are concerned, we wanted to be on the safe side and not risk anything."

Sunkett said the move to enroll early was a good one for his players.

"They went back and forth with it and it wasn't easy on them," Sunkett said. "In the long run, it's the best decision. Their plan was to leave in January anyway after we played. I feel bad for them because every kid wants to play their senior season in high school. Once spring comes and we're able to get out there with the kids still here, we'll win that title for those guys and finish the job these guys started."

A UCLA commit, East St. Louis' Keontez Lewis caught 39 passes for 826 yards and scored 10 touchdowns as a junior to help the Flyers capture the Class 5A state title.