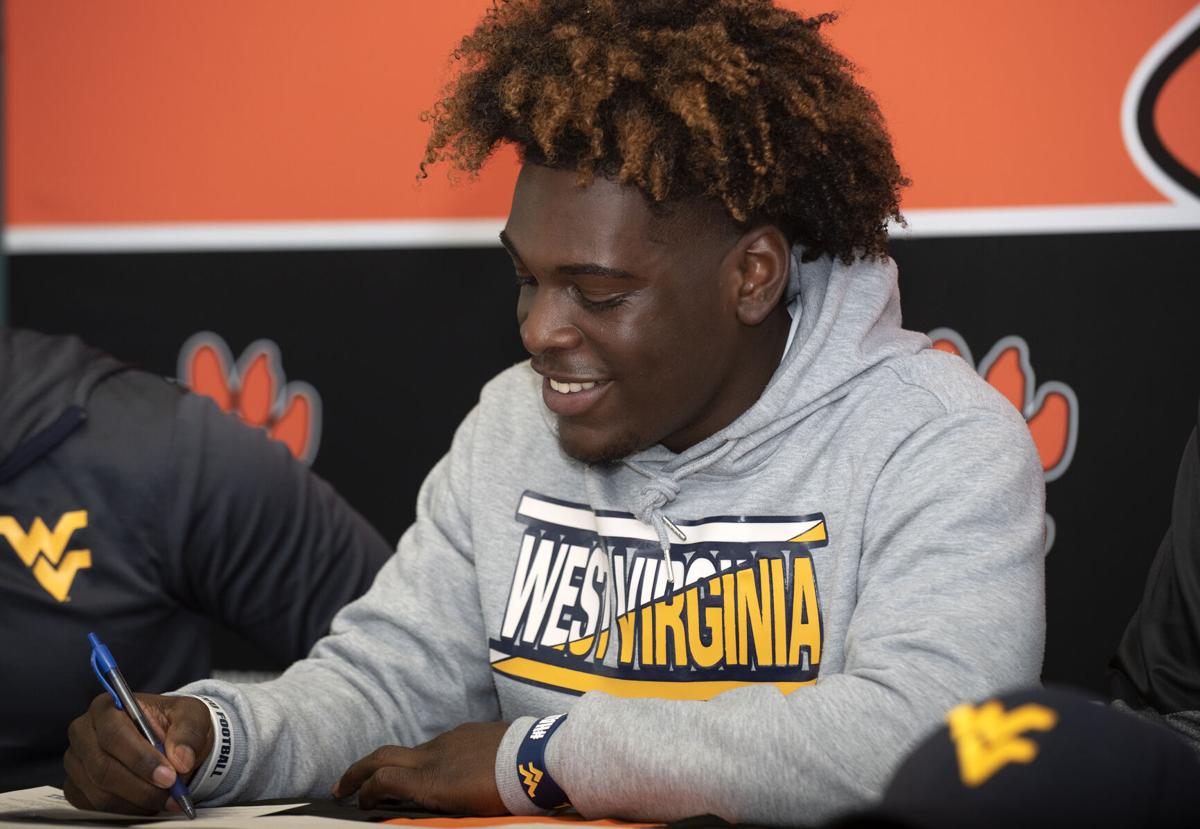 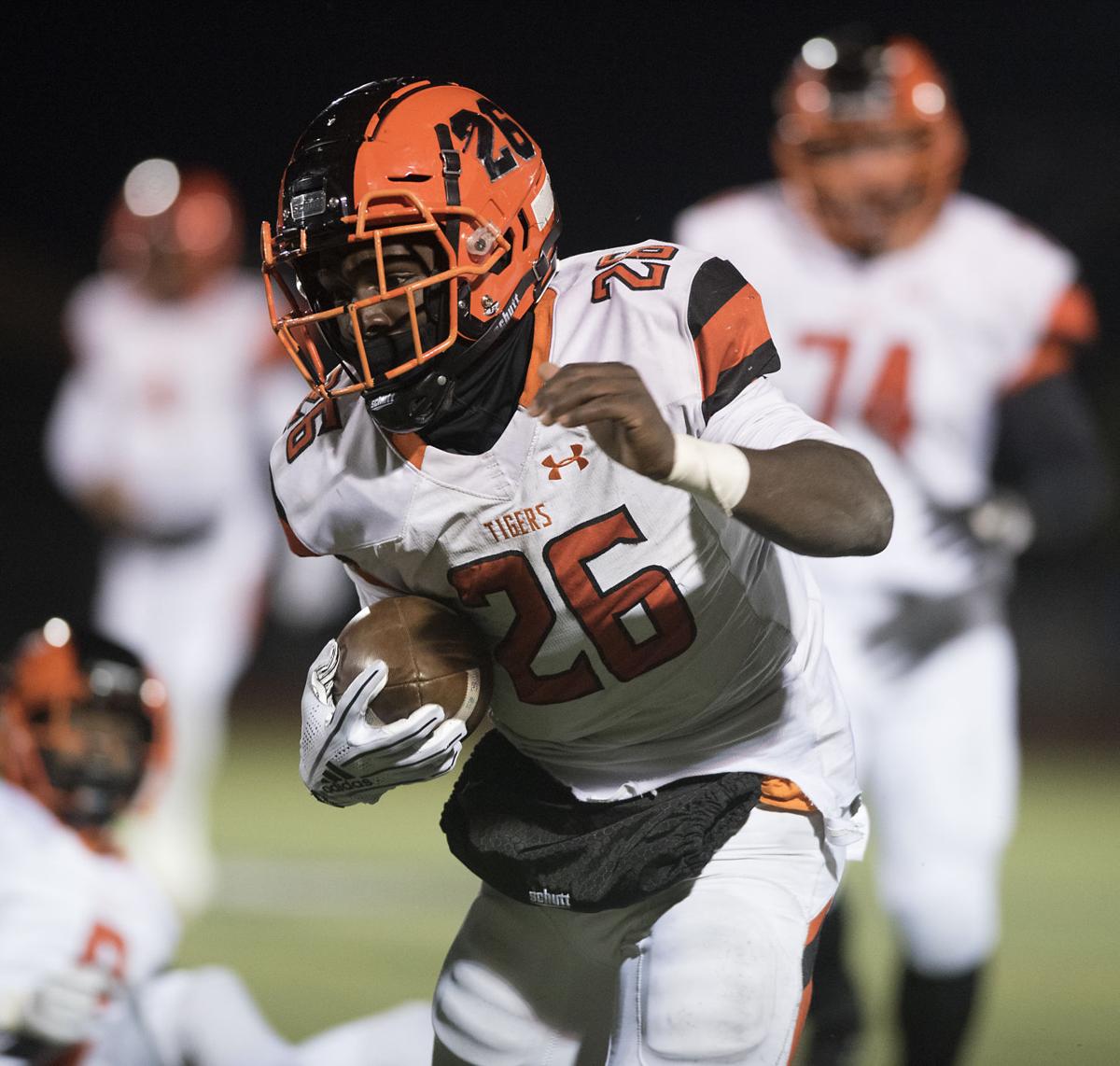 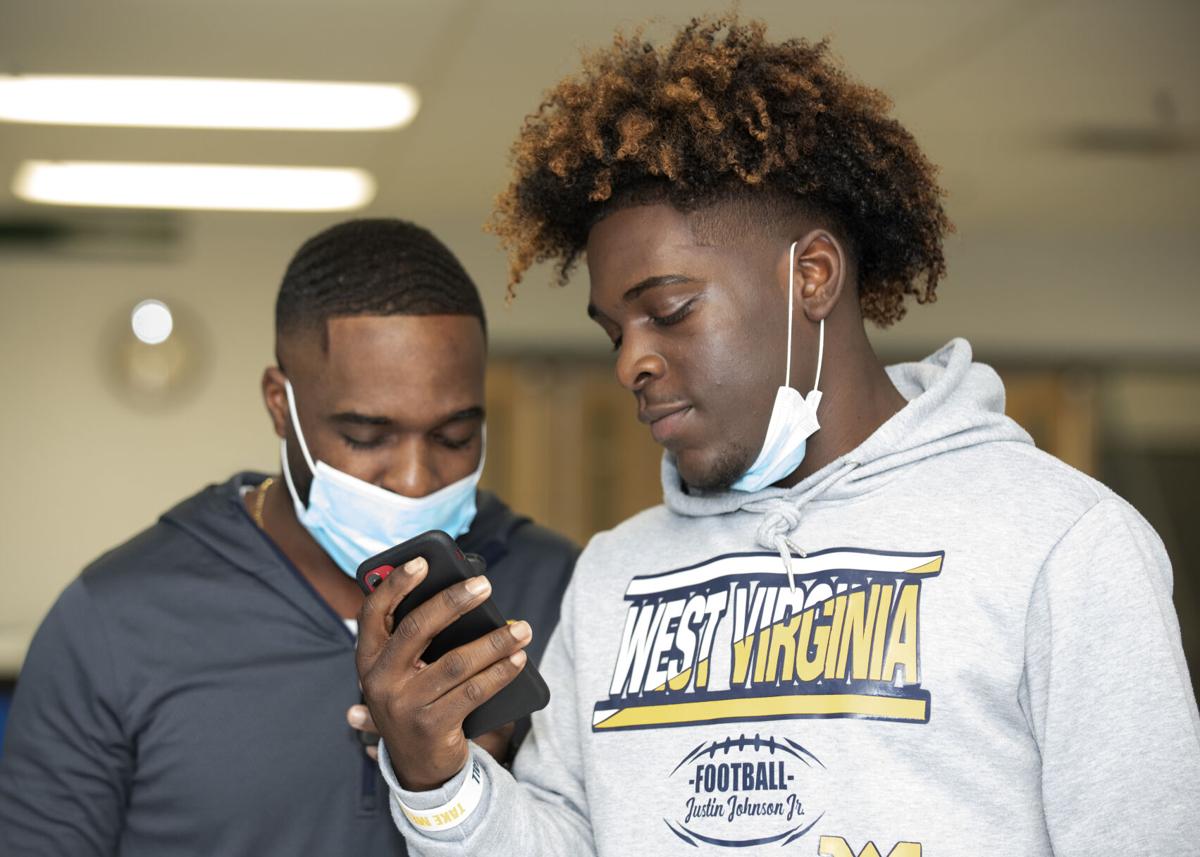 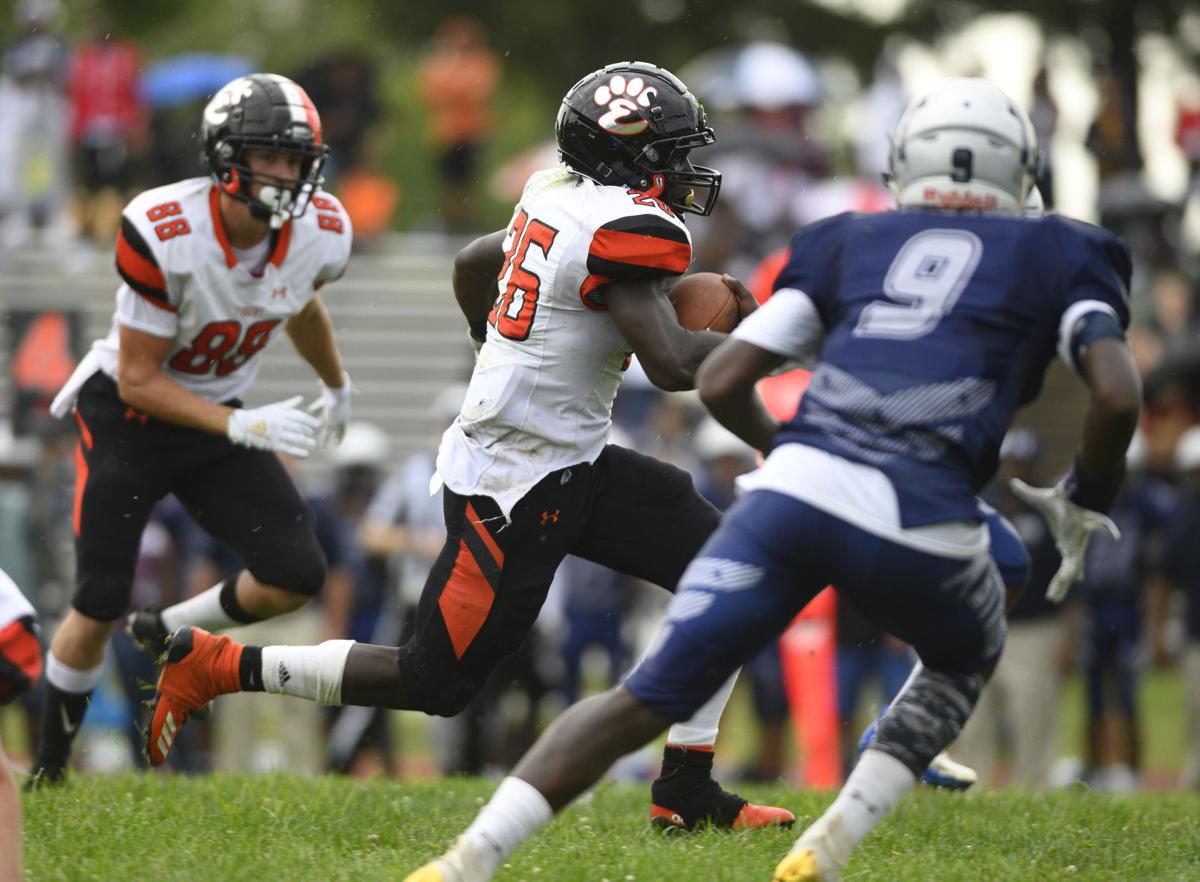 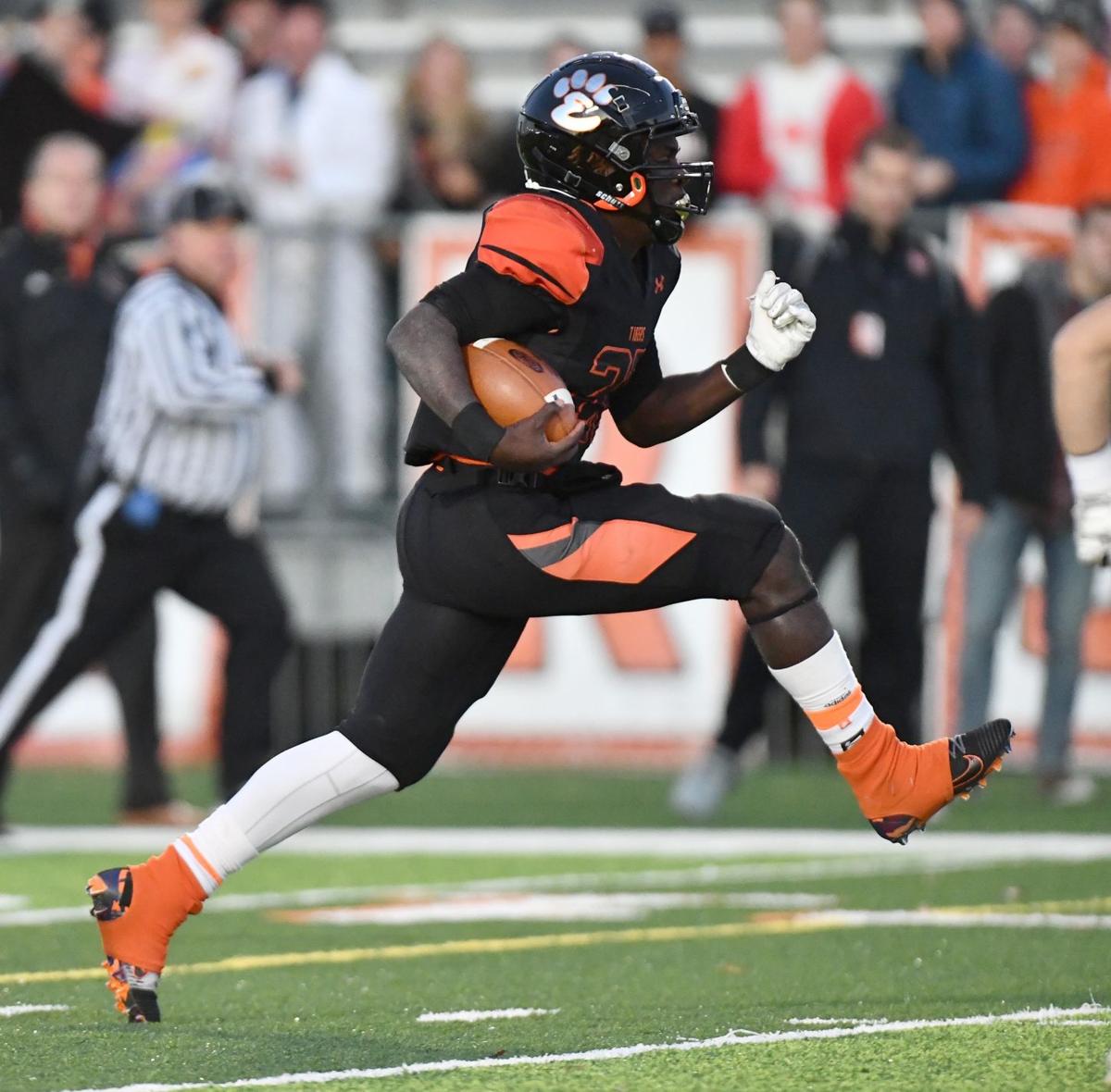 Edwardsville running back Justin Johnson Jr. leaps to avoid a tackle as he runs the ball. St. Charles East competed at Edwardsville in a Class 8A first-round football playoff game on November 1, 2019. Tim Vizer/Special to STLhighschoolsports.com

EDWARDSVILLE — Justin Johnson Sr. was all set for a west coast swing. He had visions of seeing his son wear the red and white colors of Stanford University.

But that all changed after Justin Jr, an Edwardsville High senior running back, returned from a recruiting trip out east.

"My son came home after he, my wife and kids went off to West Virginia," Johnson Sr. said. "He came home and said 'Dad, you have to go (see this place).'"

Once the elder Johnson saw the Morgantown campus, he knew it was a perfect fit for his son.

Johnson put ink to paper on Wednesday and signed a letter of intent to play football at West Virginia University.

"I know I verbally committed, but signing that paper and making it official is a whole new feeling," Johnson Jr. said. "It let me know that I'm moving on to the next level."

The six-foot, four-star athlete took two trips to the Big XII program that is under the direction of second-year coach Neal Brown. He made a verbal commitment on Sept. 27.

"It was the coaches - they made it feel like home," Johnson Jr. said. "They took me in and made me feel comfortable."

Johnson brought his father along on that second trip.

"When I went, I fell in love," Johnson Sr. said. "They were able to answer a lot of tough questions. We stayed in contact with Cal-Berkley, Louisville and Stanford, but no one gave us more attention than West Virginia."

Johnson had more than 15 offers from schools including Stanford, Illinois, Louisville, California and Purdue.

Over the past two seasons, the Tigers' workhorse amassed 2,180 yards on the ground on 324 carries. He also scored 22 times as a sophomore and junior. He caught 26 passes for 300 yards and scored five receiving touchdowns.

When Edwardsville coach Matt Martin saw Johnson Jr. as a freshman, he knew he had the physical capabilities of competing in the grueling Southwestern Conference.

But it was the mental load that worried him at first.

"He went from eighth grade practicing maybe three times a week to high-intensity training with a lot of expectations six days a week," Martin said. "But he handled it all and was there every day working hard."

Johnson is expecting to play in the spring for Edwardsville before jetting off to college. The Mountaineers are currently 5-4 with a 4-4 Big XII record.

Johnson knows he will have to work hard to grab a position in the starting backfield.

"At the end of the day I'm going to have to go up there and earn my spot," Johnson said.

He's heard the school's theme song, "Take Me Home, Country Roads," by John Denver a lot after making the commitment. But he still hasn't memorized the words.

Not yet, but it's something he'll fix.

Edwardsville running back Justin Johnson Jr. leaps to avoid a tackle as he runs the ball. St. Charles East competed at Edwardsville in a Class 8A first-round football playoff game on November 1, 2019. Tim Vizer/Special to STLhighschoolsports.com