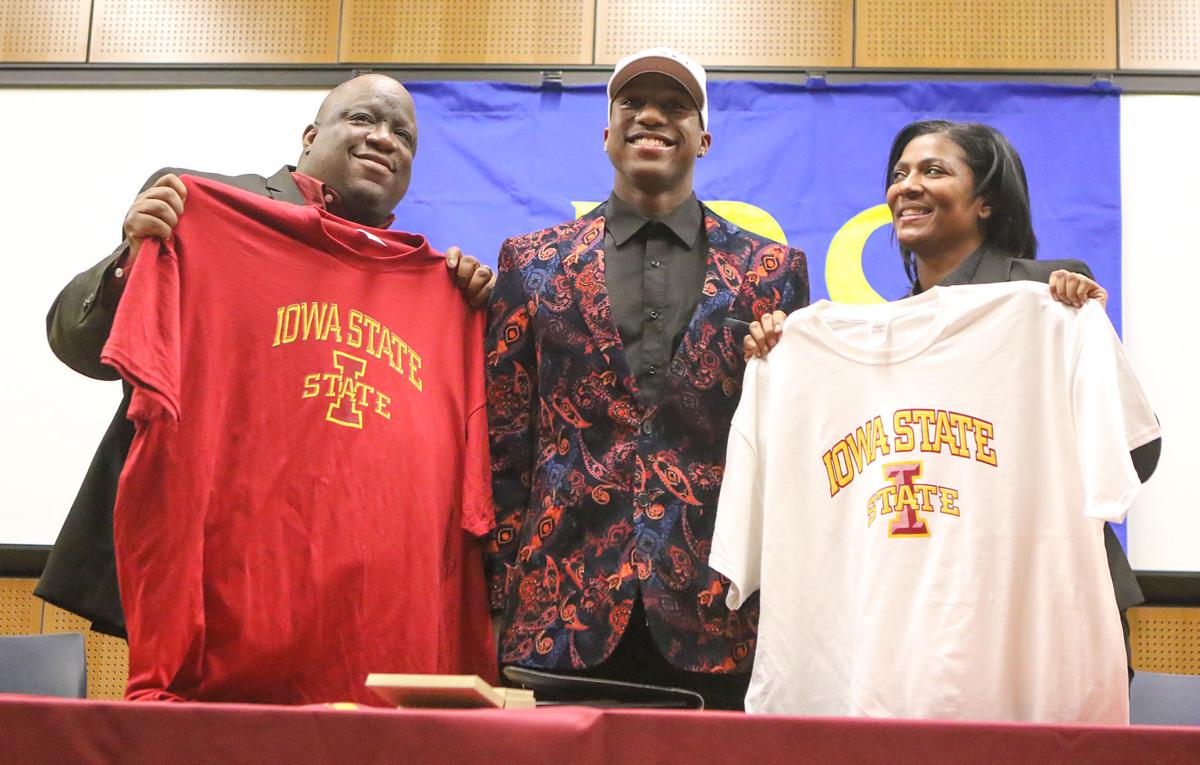 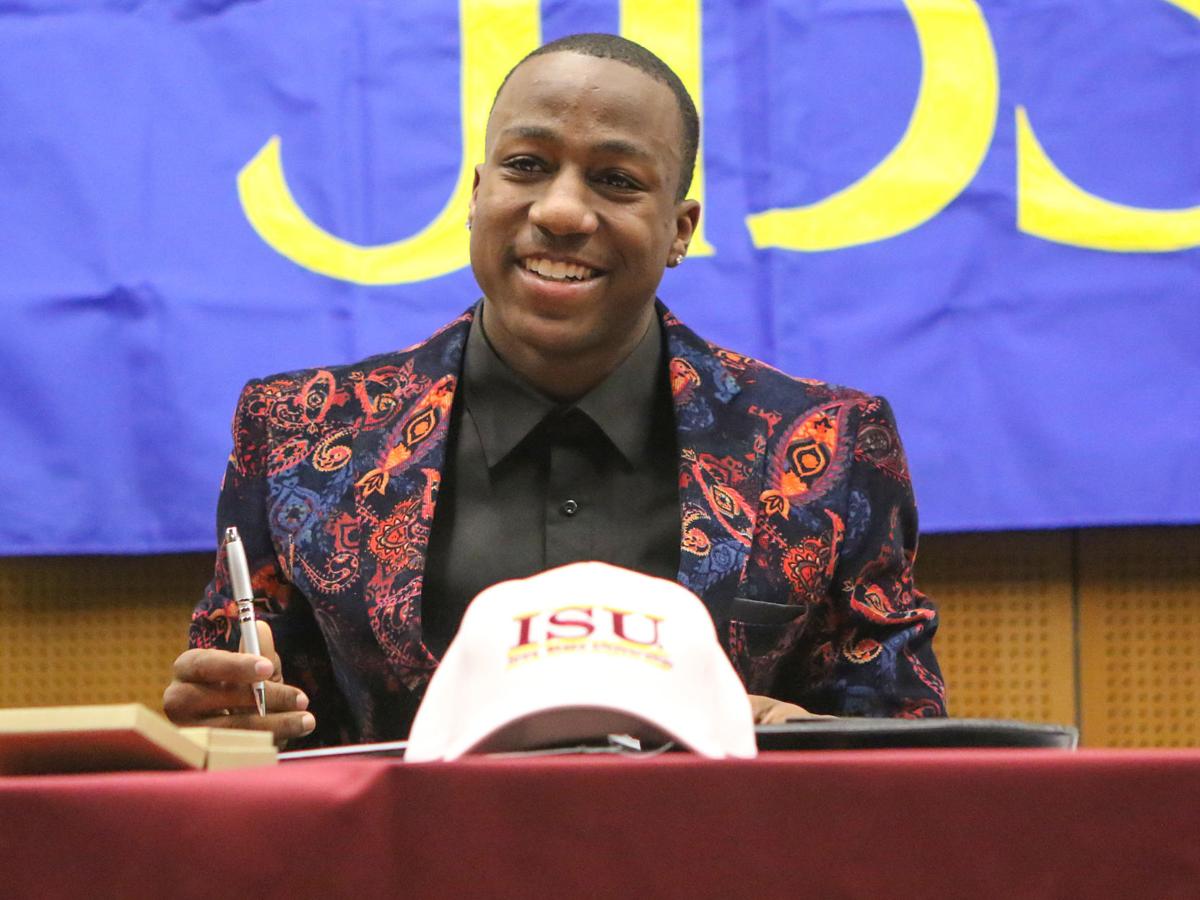 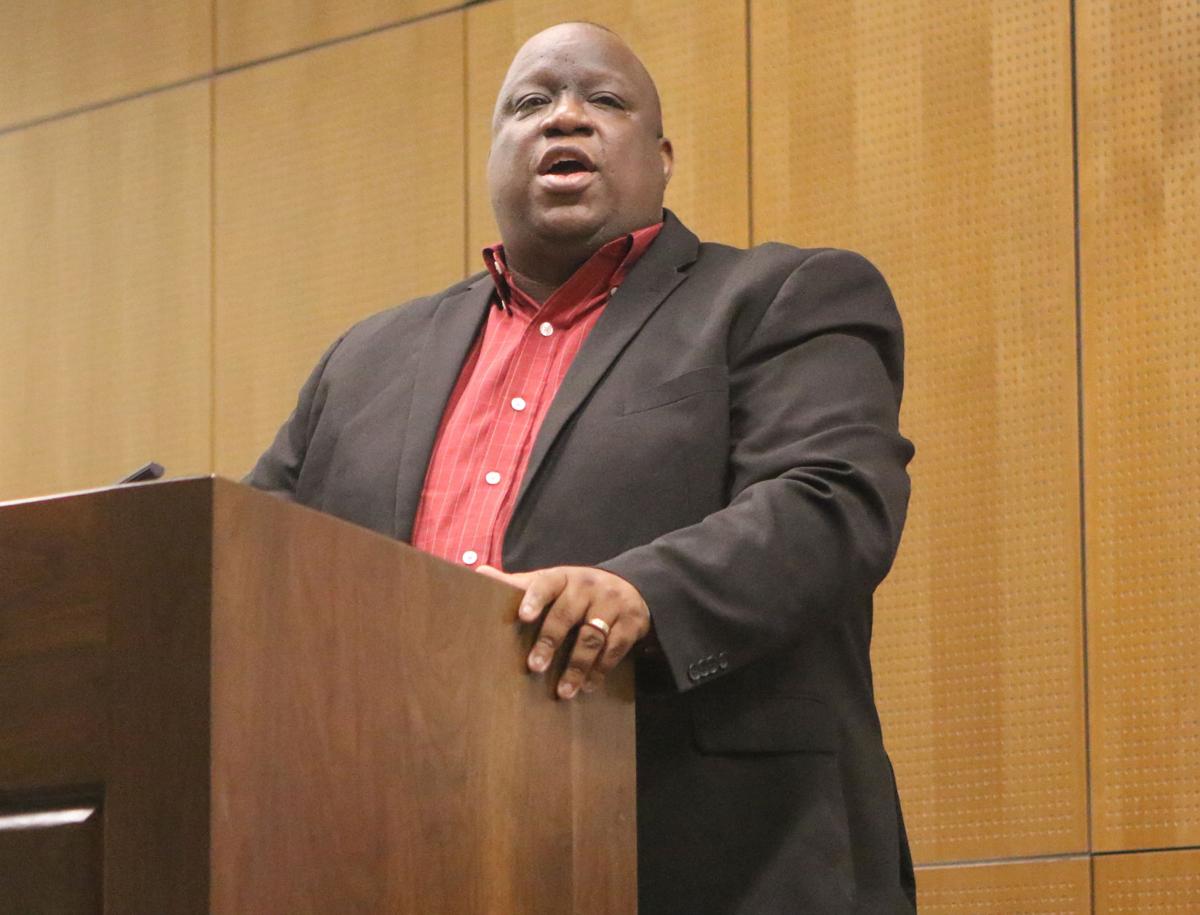 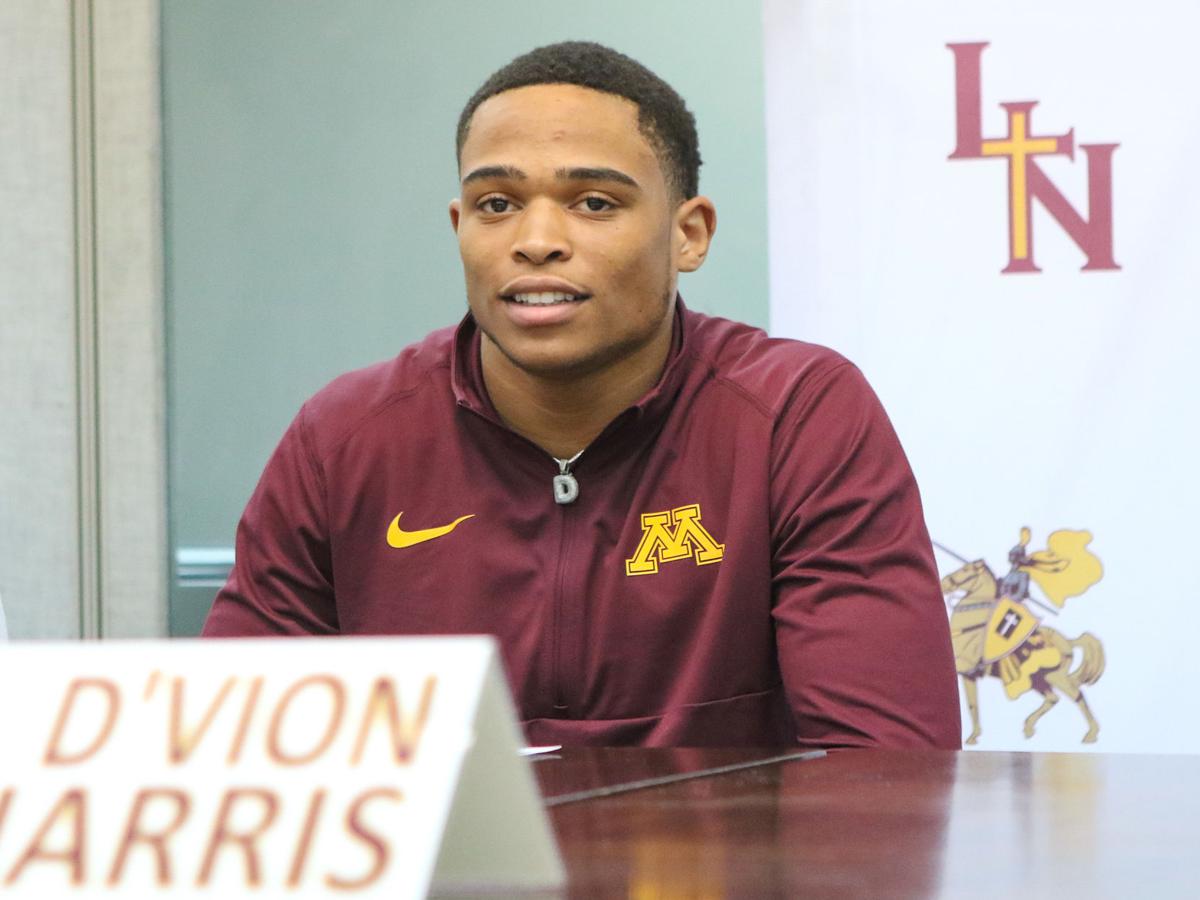 Lutheran North's D'Vion Harris smiles prior to signing his national letter of intent to play football at the University of Minnesota on Wednesday, December 19, 2019 at Lutheran North High School in Jennings, Mo. Paul Kopsky, STLhighschoolsports.com 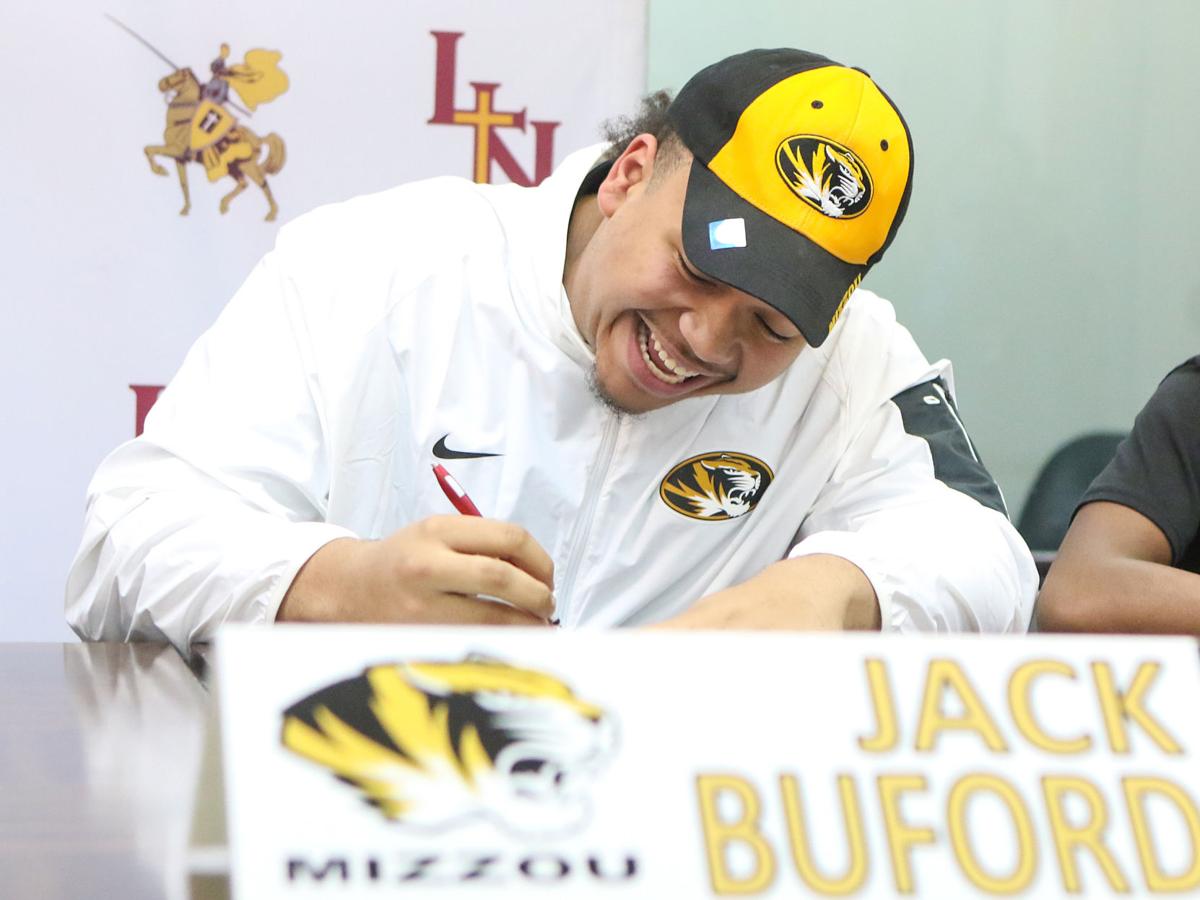 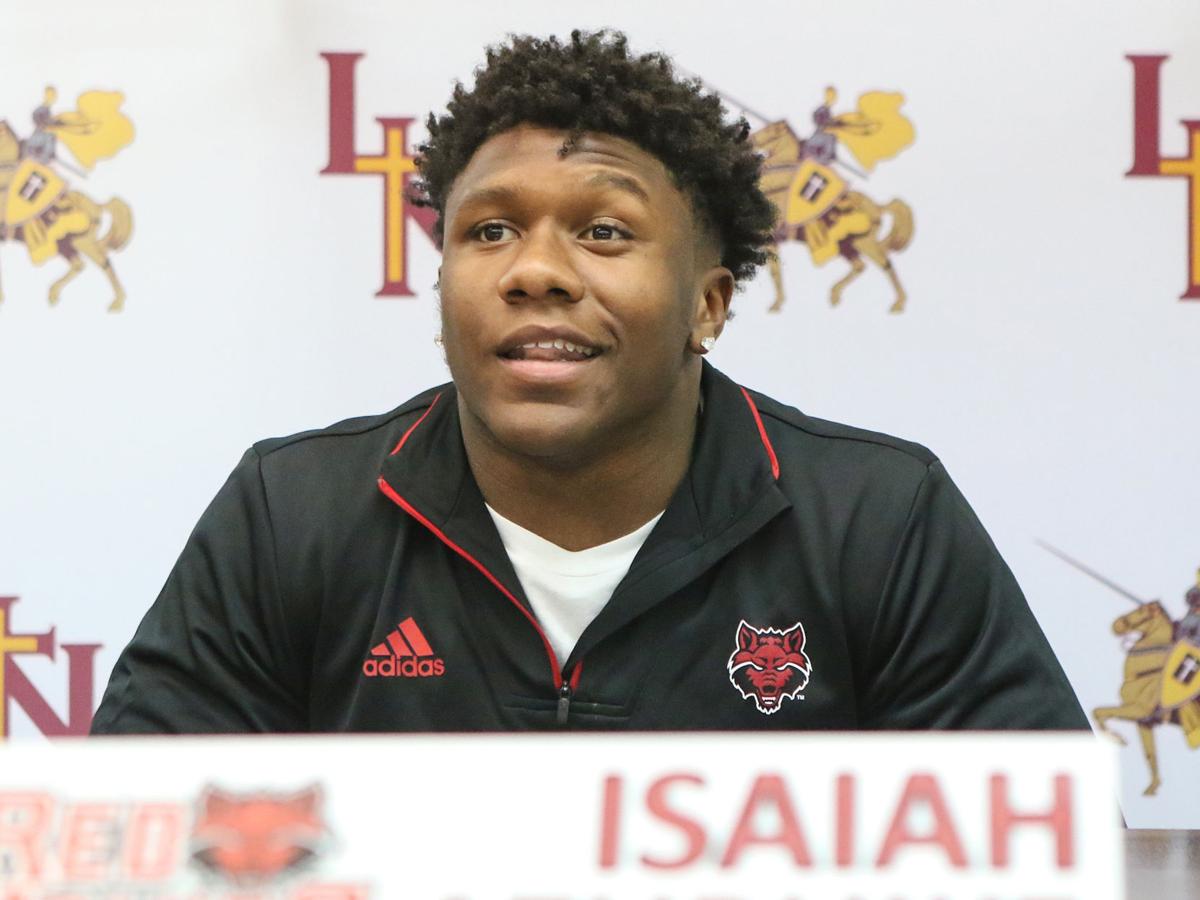 LADUE • DJ Miller's jacket was one only a father could love.

A sport coat with a burgundy and black paisley pattern, Miller wore it proudly at his signing day ceremony Wednesday at John Burroughs.

“Me and my dad found it online and instantly fell in love with it so we had to get it,” Miller said with a smile. “We pride ourselves on being different and outworking the rest so why not go out in style?”

A senior cornerback for the John Burroughs football team, Miller signed with Iowa State and achieved a goal he has worked toward most of his young life.

“It's a surreal event,” Miller said. “I've been dreaming about this event since I was 3. Playing college football and eventually going on to the NFL.”

The 6-foot and 165-pound Miller earned an NCAA Division I scholarship despite suffering through several painful injuries. As a sophomore against MICDS, he suffered a fractured collar bone. In the summer before his junior season, he broke his ankle. Later that same week, Miller was scheduled to make unofficial visits to several colleges that were on the verge of offering him a scholarship. The timing couldn't have been worse.

Derrick Miller, DJ's father, told the assembled crowd of family, friends, coaches and well wishers that he walked toward his son's room when they returned home to console him. But what he heard as he approached stopped him.

“I could hear his tears through the door,” Derrick Miller said. “As a father, what do you do? I walked away. It was a teaching moment. When you don't have anyone else you always have yourself.”

Miller overcame the setbacks, persevered and now joins the other Burroughs' standouts that have recently gone on to play Division I football. Among the Bombers to make that leap are John Moten (Northwestern), Foye Oluokun (Yale) and Ezekiel Elliott (Ohio State).

Miller said the trying times he went through will only help him as he moves forward in his life.

“It was definitely a finding myself moment and I think I'm better for it,” Miller said. “I know how to face adversity. When life knocks you down, how to get back up because life goes on. I think that will help me throughout life after football as well.”

The pen put an end to the drama.

Offensive tackle Jack Buford, defensive end D'Vion Harris and running back Isaiah Azubuike all verbally committed before their senior seasons. That didn't stop from them being the focus of other programs as they aimed to stockpile their rosters.

“They had a lot of pressure on them throughout the whole year, especially committing early and schools trying to come in and flip their commitments,” Reed said. “That's the hardest thing.”

In the end, all three stayed true to pledges as Buford signed with Missouri, Harris with Minnesota and Azubuike with Arkansas State.

The stress and challenges that come with recruiting are now over and done with. No one is happier to put recruiting to bed than Buford.

“I'm ready to put this mug to sleep right now,” Buford said with a grin.

Buford didn't get a lot of attention to flip his commitment. The 6-foot-5 and 290-pound tackle is among the most vocal Mizzou supporters on social media. He's not shy about selling the Tigers and where he sees the program headed to anyone who'll listen.

“I think (other schools) knew,” Buford said. “Not a lot of guys when they commit are out recruiting like I am.”

Azubuike was recruited as a linebacker or safety by several Power 5 programs after he spent the majority of his high school career on the defensive side of the ball. But the 5-foot-10 and 195-pounder was focused on playing running back. He took over the primary running back role this season for the Crusaders and rushed for 1,237 yards and scored 20 touchdowns despite missing several games with an injury.

Harris said there were some schools coming hard for him but the more they pushed, the more he backed away. Harris said Minnesota was in on him early and, in the end, that mattered a great deal.

“It's pretty obvious to tell the real from the fake,” Harris said.

Reed understands his players are going to go through something similar every signing day for the foreseeable future. College recruiting is a cold game, and until the paperwork is signed nothing is official.

“That's the nature of the business,” Reed said. “Committing to a school at this point means nothing to a lot of coaches because they don't stop recruiting them.”

The most lauded prospect in Missouri this year, Isaiah Williams had more than 40 scholarship offers as a junior. When it came time to make it official, he stayed true to his pledge.

A 5-foot-10 and 160-pound quarterback and the two-time Missouri Gatorade Player of the Year, Williams signed with Illinois Wednesday morning. He will reunite with former Trinity coach Cory Patterson, who joined the Illinois coaching staff last spring after a three-year run with the Titans.

Senior receiver Marcus Washington announced he'd take his talents to Texas and did not waver despite some speculation he might. The 6-foot-2 and 170-pound Washington signed with the Longhorns.

They were the only two Titans to sign Wednesday. Senior linebacker Shammond Cooper will pick between Illinois, Missouri, Oklahoma and Texas during the Under Armour All-American game in January. Senior offensive lineman Ira Henry will sign in February with one of the bevy of elite programs that have offered him a scholarship including Illinois, Missouri and Florida State, which jumped in on him earlier this month.

Trinity did not hold a signing day ceremony. The players that signed preferred to wait to celebrate with their teammates who will sign in the regular signing period, which begins on Feb. 6.

Two of the state's most accomplished players had the hardest time selling themselves to college programs in their home state.

Both will leave a lasting legacy at the high school level.

In his three years as a starter, the 6-foot and 197-pound Gabbert threw for 8,874 yards, 103 touchdowns and was intercepted 11 times. He guided the Cadets to back-to-back state championships and was routinely praised by CBC coach Scott Pingel as one of the great football minds he's come across at any level.

Bradford rushed for 2,090 yards and scored 39 touchdowns this season after he racked up 1,505 yards and scored 30 touchdowns last season. Like Gabbert, the 6-foot and 230-pound Bradford had a hard time catching the eye of the Power 5 programs. Instead, he'll be part of coach Sean Lewis's first recruiting class.

Senior receiver and tight end Niko Hea's recruiting was a slow burn early on but caught fire during his senior season. It finally erupted Monday night when he received an offer from Mizzou and committed on the spot. The 6-foot-5 and 220-pound Hea signed with the Tigers Wednesday morning.

Hea caught 43 passes for 814 yards and 12 touchdowns this season.

Senior defensive end MJ Anderson verbally committed to Minnesota before his senior season only to decommit a few weeks ago. He re-committed and signed with the Golden Gophers. After rehabilitating from a broken leg as a junior, Anderson had a strong senior year that saw him finish with 62 tackles, 21 tackles for loss and 11 sacks. He was named the Metro Catholic Conference's defensive player of the year.

The players elected to not have a signing ceremony on Wednesday and will instead join their other teammates and sign at the start of the regular period on Feb. 6.

Lutheran North's D'Vion Harris smiles prior to signing his national letter of intent to play football at the University of Minnesota on Wednesday, December 19, 2019 at Lutheran North High School in Jennings, Mo. Paul Kopsky, STLhighschoolsports.com