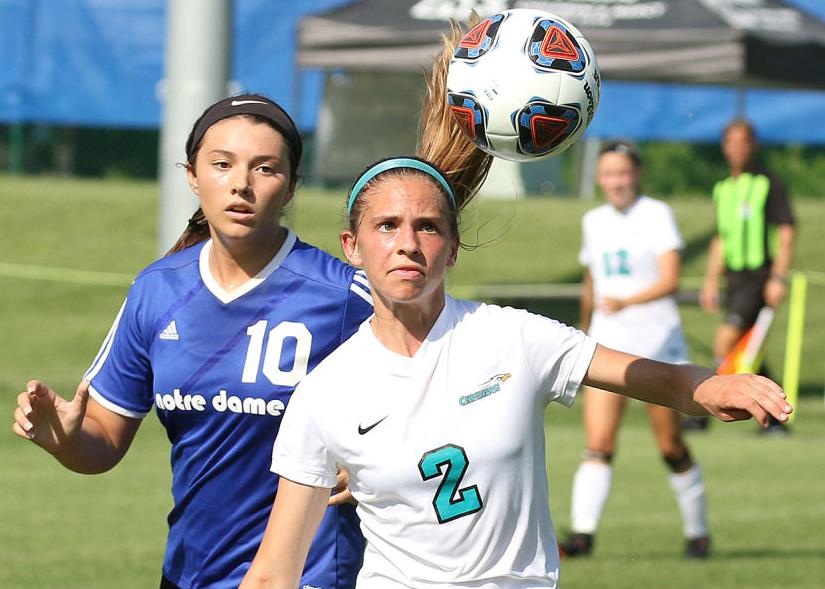 O'Fallon Christian's Mercedes Schroer (2) looks to bring the ball down while being marked by Cape Notre Dame's Shelby Bauwens during the Class 2 state championship on Thursday, May 31, 2018 at Swope Soccer Village in Kansas City, Mo. Paul Kopsky, STLhighschoolsports.com 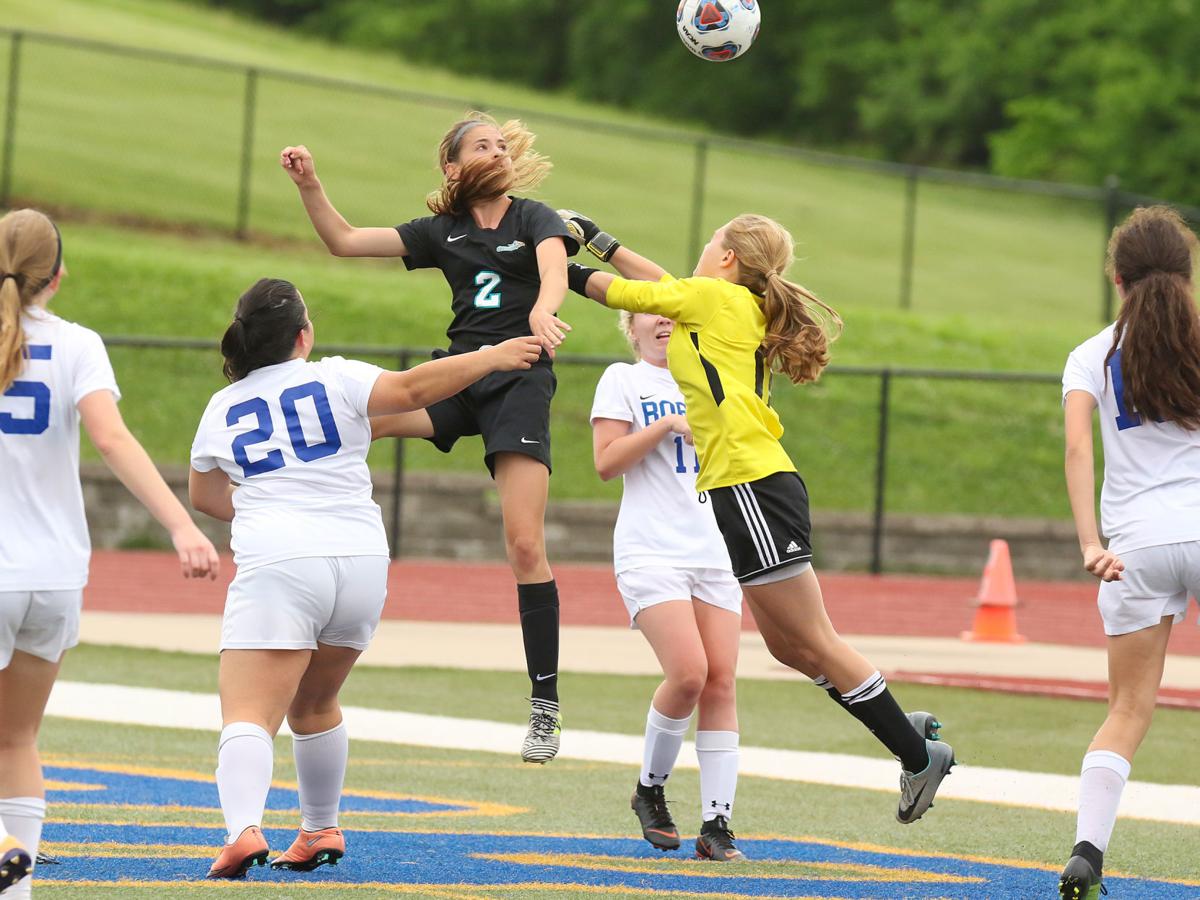 Borgia goalie Abigail Mueller (right) comes out to punch the ball away as O'Fallon Christian's Mercedes Schroer (2) looks to head the ball during a Class 2 sectional on Saturday, May 19, 2018 at Borgia High School in Washington, Mo. Paul Kopsky, STLhighschoolsports.com

Mercedes Schroer has done a lot of winning in her high school career, and she also has shown the ability to battle past adversity.

The O'Fallon Christian junior kicked off her freshman year with an individual runner-up finish at the Class 3 girls cross country state meet in 2017. She followed it up in the spring of 2018 with two Class 3 track and field state titles and by helping the Eagles soccer team win the Class 2 state title.

Schroer's rapid ways of winning continued on the cross country course as she won the Class 3 state championship as a sophomore in 19 minutes, 36 seconds.

But Schroer's impressive streak hit a bump on the soccer field when the Eagles won just four soccer games her sophomore season.

“It's been nice with my club because they push me. We've been very successful in the past. That makes the up and downs of high school a little bit easier," Schroer said. "Being a national champion is something I will never forget and it's one of the best things of my life.”

Another obstacle has been the cancellation of O'Fallon Christian's 2020 soccer season because of the coronavirus pandemic. But Schroer once again found a way to make things a little brighter by bolstering her future in the sport.

Schroer announced via the Lou Fusz Soccer Twitter page she given a verbal commitment to play women's soccer at Miami of Ohio in the fall of 2021.

“This is a weight lifted off my shoulders because I like Miami of Ohio and I just feel really comfortable with my decision,” Schroer said. “The one thing that stood out to me from the beginning was the coaches. The campus is also extremely beautiful. The biggest thing that really helped with my decision is that I could see myself going to school there, even if I couldn't play sports.”

Schroer's verbal commitment to Miami is non-binding. Athletes in the class of 2021 can't sign for women’s soccer until Nov. 11, which is when the national letter of intent signing period begins.

Schroer has tallied 17 goals and 11 assists during her two seasons with O'Fallon Christian.

Last summer, she helped Lou Fusz 03 Blue hold its opponents to six goals over five games at the national tournament.

“Mercedes is one of the best attacking wingbacks that I have ever seen,” Lou Fusz 03 Blue coach Pat McVey said. “I've seen her make a tackle in our box and, within a couple of moves, be in the other team's box. I just can't say enough about her. She was an integral part of our run at nationals and she is and will be a huge part of our quest to defend.”

With the Redhawks, Schroer is joining a program that has made four NCAA Tournament appearances, the last of which came in 2012.

An avid runner for most of her life, Schroer has continued to run for the Eagles but recently has revved up her focus on soccer.

She was the Class 2 state runner-up in cross country last fall and as a sophomore repeated her Class 3 title in the 3200 meters while finishing as runner-up in the 800 and 1600.

“When I was younger, running was a big part of what I did and was really important to me,” Schroer said. “But over the last couple of years, soccer has just really been the bigger part of my life. I will always have (fond memories) of what I did as a runner. It's just that soccer has really become the big thing for me.”

O'Fallon Christian's Mercedes Schroer (2) looks to bring the ball down while being marked by Cape Notre Dame's Shelby Bauwens during the Class 2 state championship on Thursday, May 31, 2018 at Swope Soccer Village in Kansas City, Mo. Paul Kopsky, STLhighschoolsports.com

Borgia goalie Abigail Mueller (right) comes out to punch the ball away as O'Fallon Christian's Mercedes Schroer (2) looks to head the ball during a Class 2 sectional on Saturday, May 19, 2018 at Borgia High School in Washington, Mo. Paul Kopsky, STLhighschoolsports.com