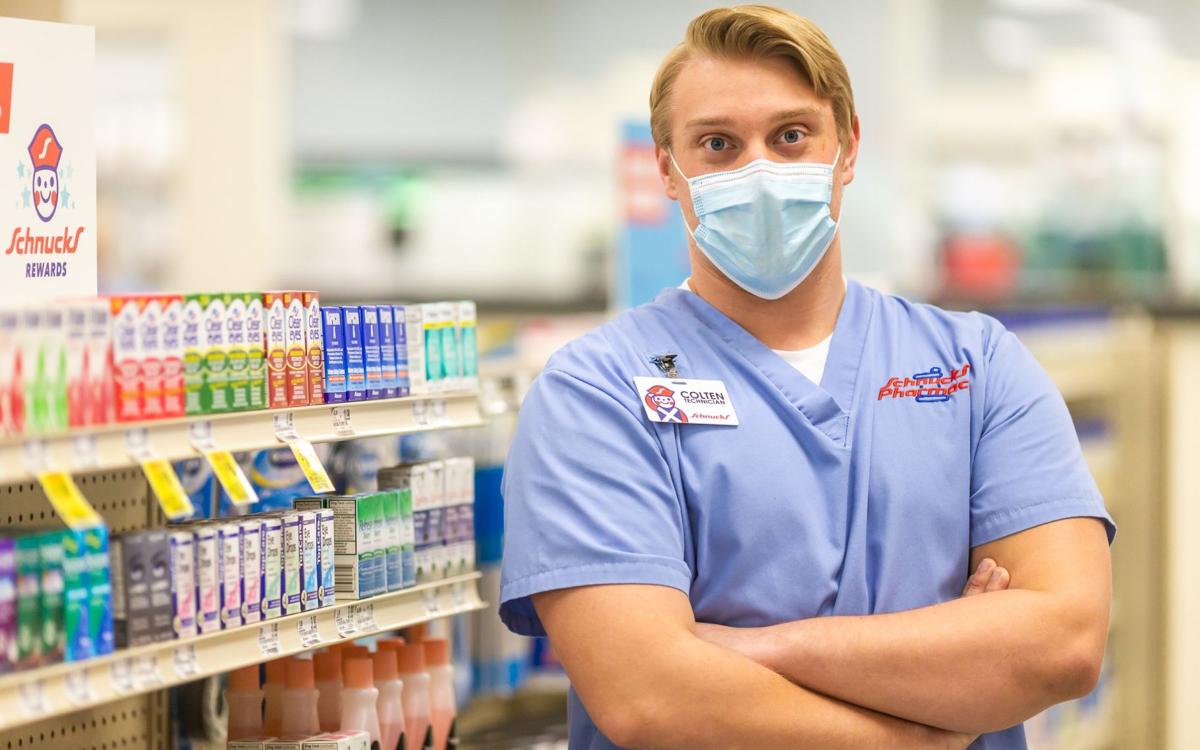 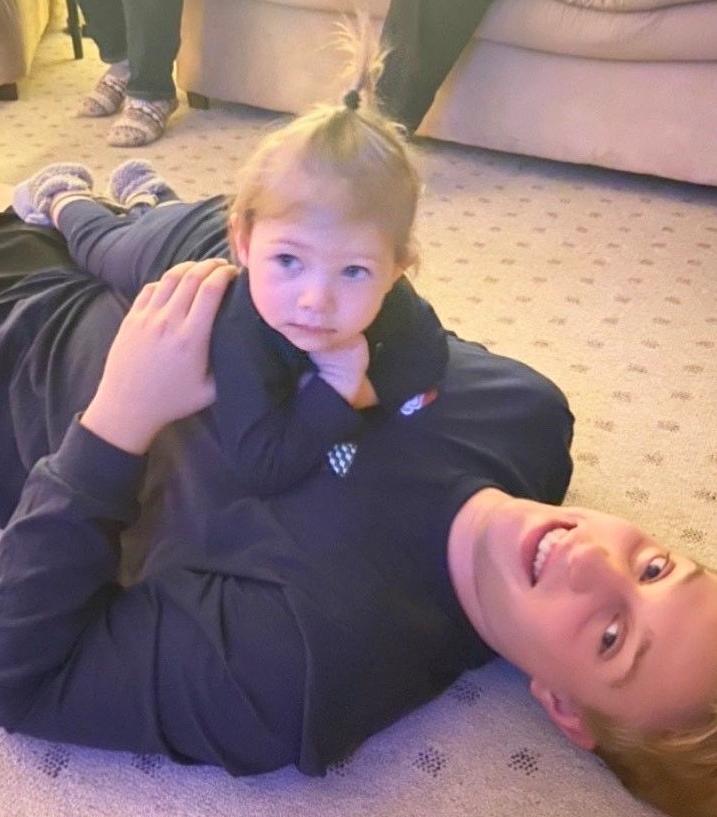 Norah Moll (left) is the 2-year-old niece of Colten Duvall (right), Union High's 2020 Post-Dispatch Scholar Athlete. Norah, the daughter of Duvall's older sister, was born with spina bifida, and her battle has been an inspiration for Duvall as he heads into the medical field. Submitted photo 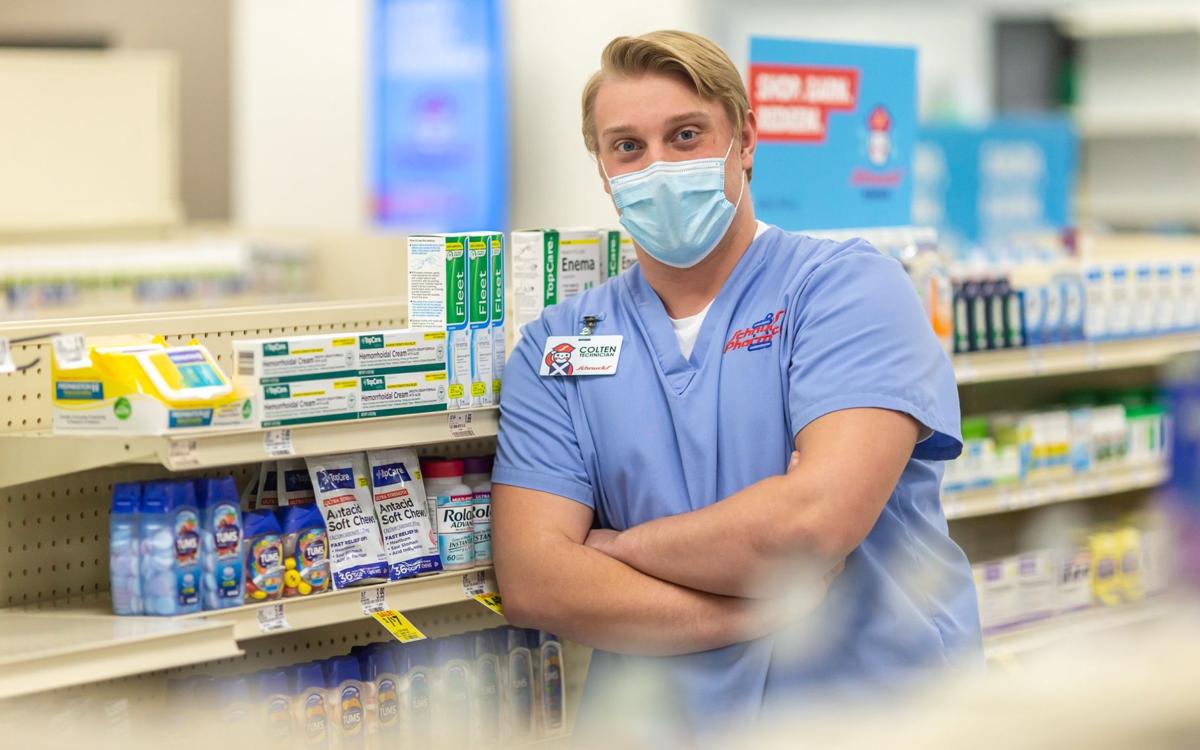 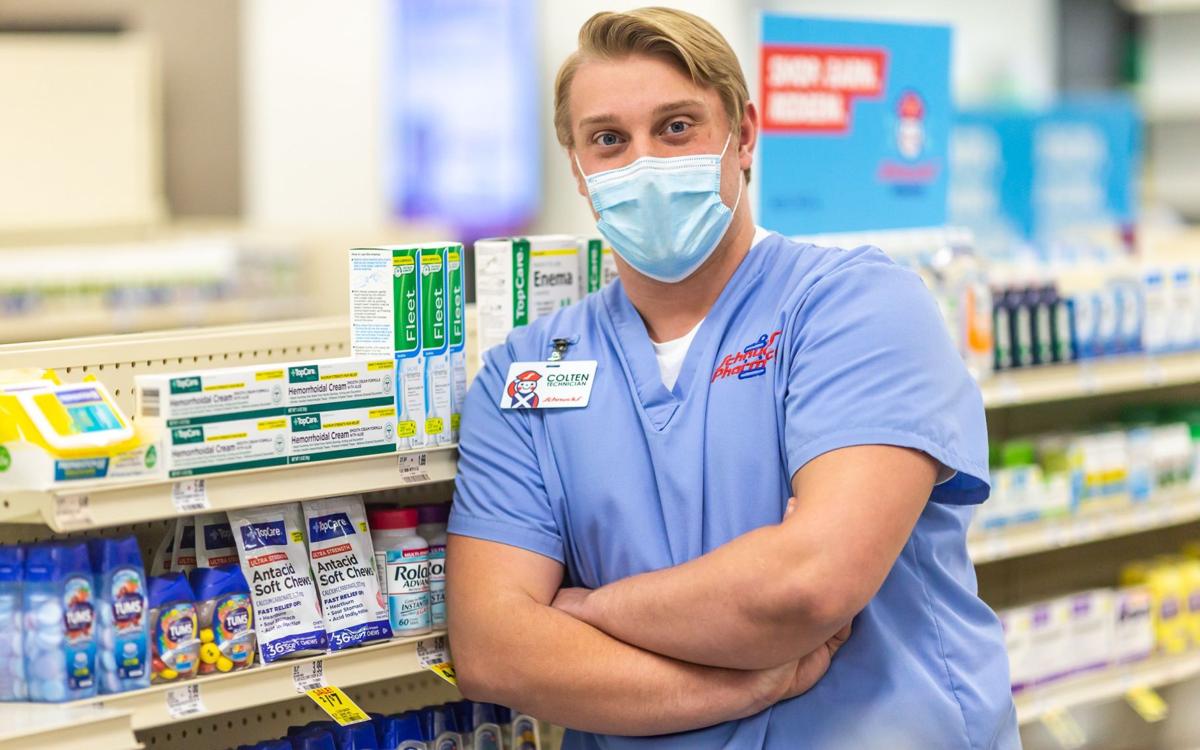 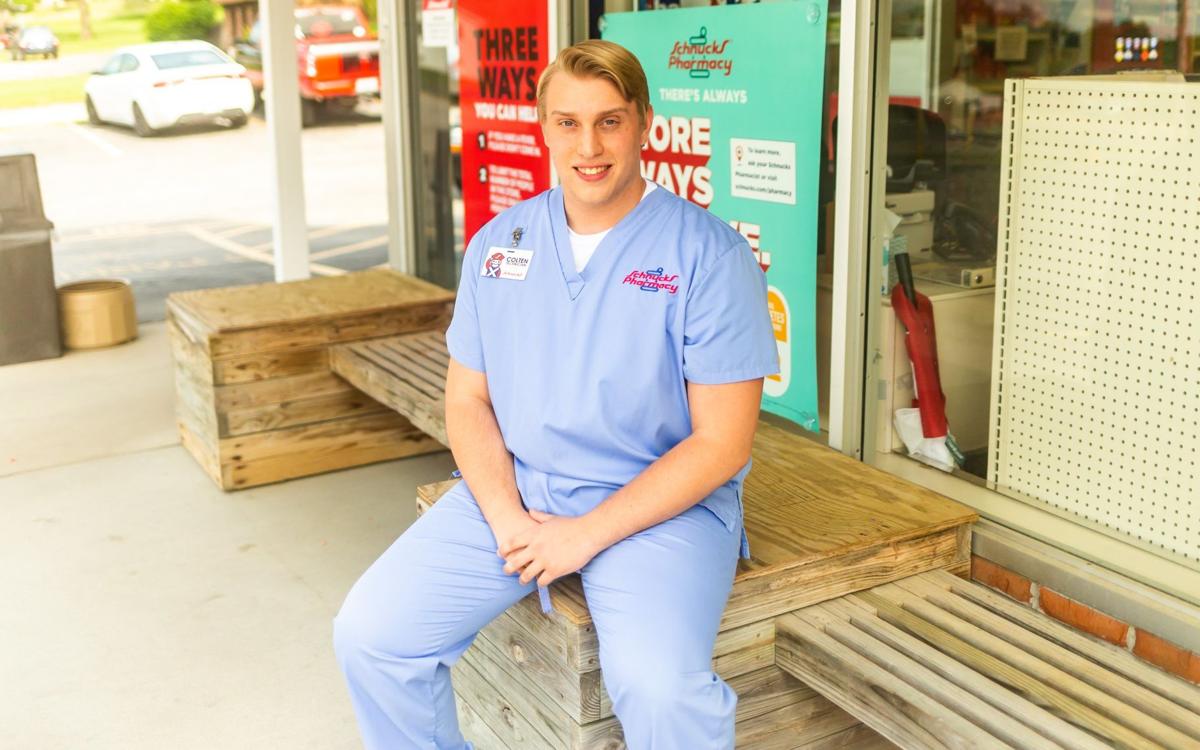 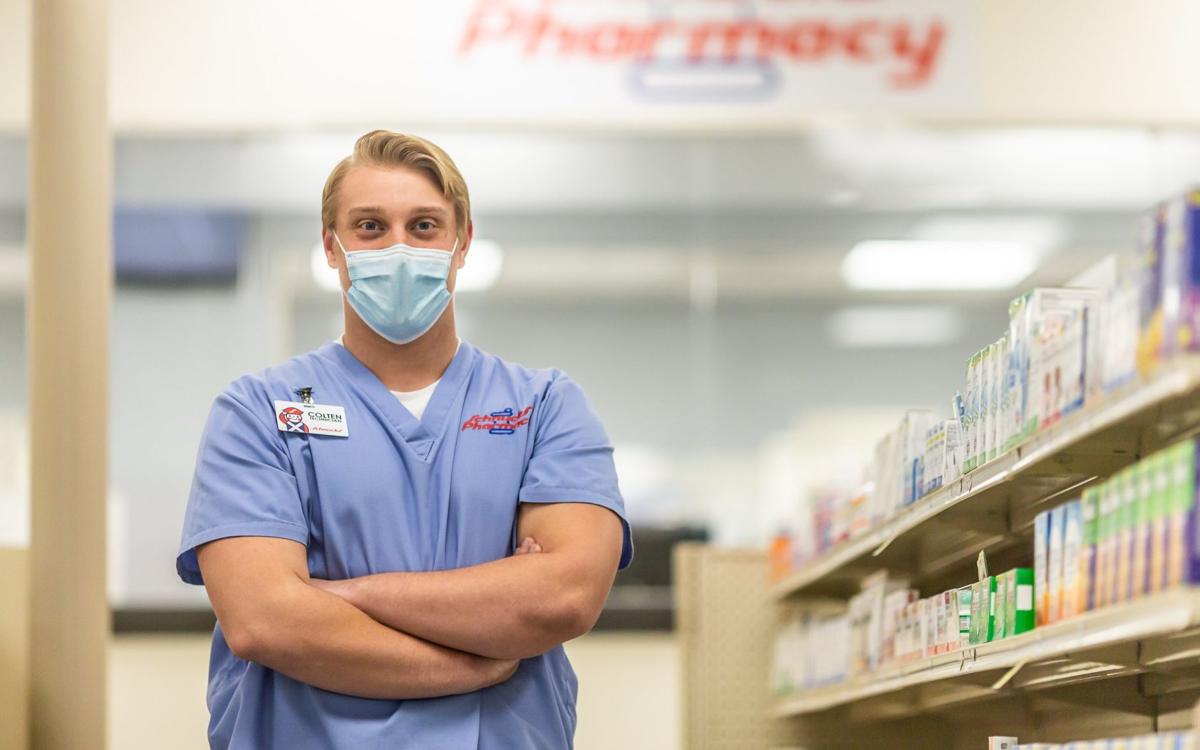 UNION — As a lineman for the Union High football team, Colten Duvall has run into many strong individuals.

But the strongest person he knows is a little 2-year-old girl.

That is his niece, Norah, who was born with spina bifida — a birth defect that occurs when the spine and spinal cord don’t form correctly.

“I may be biased, but she's the cutest baby I’ve ever seen,” Duvall said. “Just watching her thrive and prove countless doctors wrong, it’s a miracle and it pushed me because I want to help kids and families push beyond what they're expected to and maybe cause some miracles.”

Watching Norah defy the odds, including being able to sit up by herself when doctors said she say might never by able to do so, has inspired Duvall to go into the medical field. Tied at the top of Union’s academic class, Duvall will attend the St. Louis College of Pharmacy.

He hopes to become a doctor of anesthesiology and be involved in medical research. Ideally, he would like to work at St. Louis Children’s Hospital.

“With sports and everything, I’ve always liked to think that I thrive in high-pressure situations, so I wanted something that could give me that Friday night lights feeling again when I get older,” Duvall said.

Cristen Moll, Norah’s mother, said she remembers watching her little brother grow up before her eyes when Norah was born.

“After I delivered, (Duvall) was the only one I wanted in the room for lots of reasons,” Moll said. “My husband wasn’t able to be with us, he was with my daughter, so Colten was in there and I remember watching him become that rock for me and the rest of our family. We were all going through a lot, and he was too, but he would never let me see that. He stood firm and whatever I needed he was there and that was the first time I realized how grown up he was.”

Duvall, who has been selected as Union High’s Post-Dispatch Scholar Athlete, will participate in track and field at the St. Louis College of Pharmacy. He has the fifth-best javelin throw all-time at Union and also will participate in the discus, shot put and hammer throw on the college level.

He also was a standout football player for the Wildcats, starting at linebacker, center and defensive line depending on where the team needed him. He showed his toughness after suffering a bruised muscle close to his spine in a game against Sullivan last fall.

“He was actually carted off the field,” Union football coach Justin Grahl said. “Fortunately, he got really great results back and he didn't miss a single practice. He was back Monday with the starters and I think that speaks to him as far as his physical toughness as well as his mental toughness.”

Duvall shines just as brightly in the classroom, earning academic all-state and all-conference honors. He’s also a member of the National Honor Society, Science Club and Varsity Club. He works as a pharmacy tech at Schnuck’s and volunteers to help the Kiwanis Club, as well.

Working hard is a family trait and the tone was set by Duvall’s grandmother, Dolly Sutherland. The 75-year-old Sutherland runs a campground in Indiana and has no plans of slowing down.

“Ever since he was 5 years old, he would come to the campground and help me in the office,” Sutherland said. “If anyone bought ice, he would run out and bring it to the car. He's always working. Everyone around here always wants him to come back for the summer to help.”

While the drive was always there, Duvall’s athletic ability came a little later.

“He was always the powerhouse,” Moll said. “He was a little uncoordinated at first. When he was younger, we never thought he'd be able to dribble a basketball to save his life. But one day he just woke up and he was able to do it. He was really short and stout when he was younger and he just grew up. He's always had this powerhouse attitude.”

That attitude comes through in the classroom, too.

Duvall’s track coach, Sarah Meiners, also was his chemistry teacher. Meiners said she has no doubt Duvall will make his mark in medicine.

Meiners knows firsthand the impact Norah has had on Duvall.

“His niece showed him that there’s a need for people like him to seek to make people's lives better and I think he has taken that on himself,” Meiners said. “He has chosen that relationship with his niece and uses that inspiration to better people's lives outside of his family.”

The challenge of the medical field will be tough. But as Duvall knows, Norah has never backed down from a challenge — so he won't either.

Duvall believes the experience of going through Norah’s birth with his family will help him as a doctor.

Norah Moll (left) is the 2-year-old niece of Colten Duvall (right), Union High's 2020 Post-Dispatch Scholar Athlete. Norah, the daughter of Duvall's older sister, was born with spina bifida, and her battle has been an inspiration for Duvall as he heads into the medical field. Submitted photo 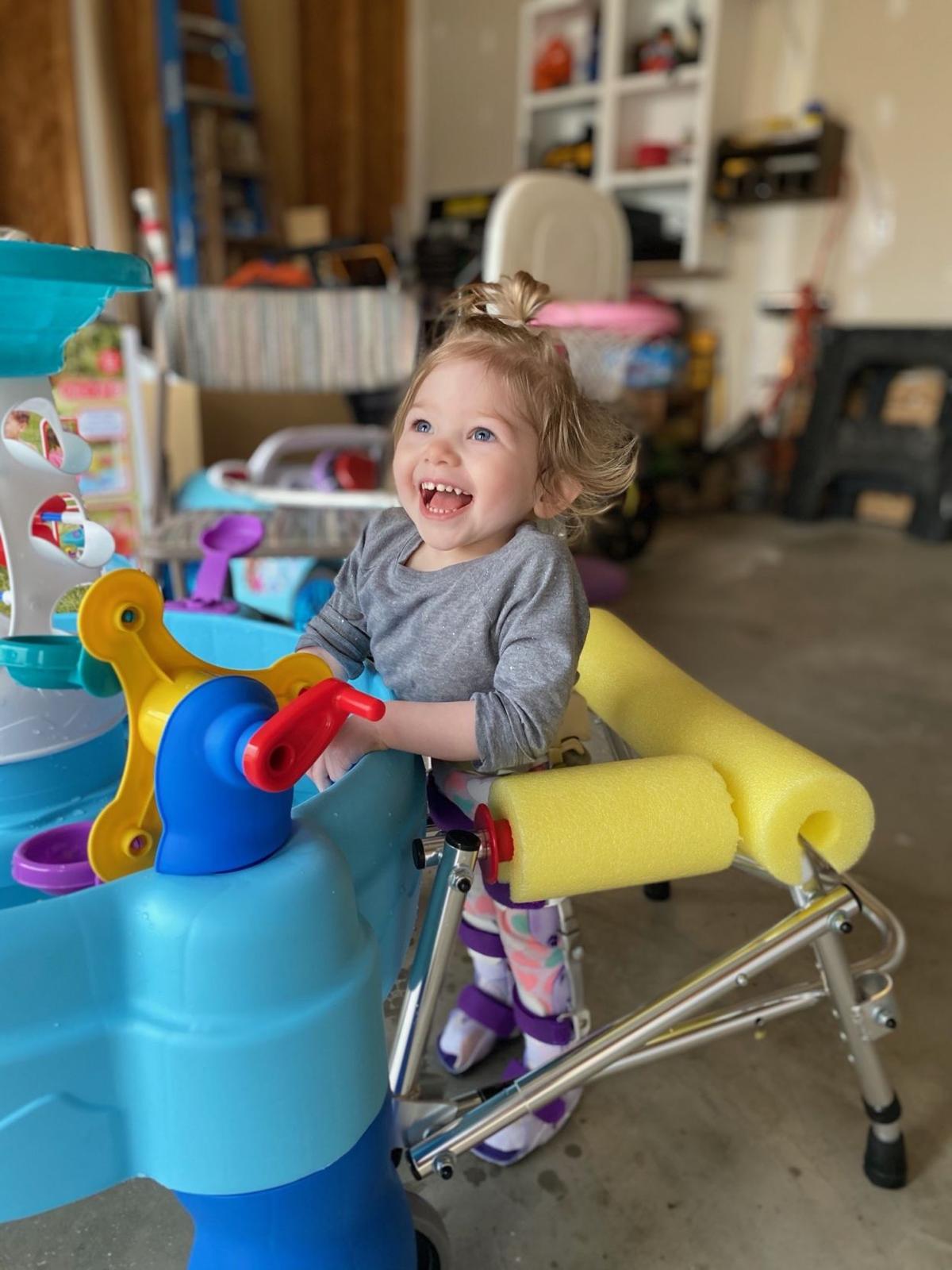 Norah Moll is the 2-year-old niece of Colten Duvall, Union High's 2020 Post-Dispatch Scholar Athlete. Norah, the daughter of Duvall's older sister, was born with spina bifida, and her battle has been an inspiration for Duvall as he heads into the medical field. Submitted photo