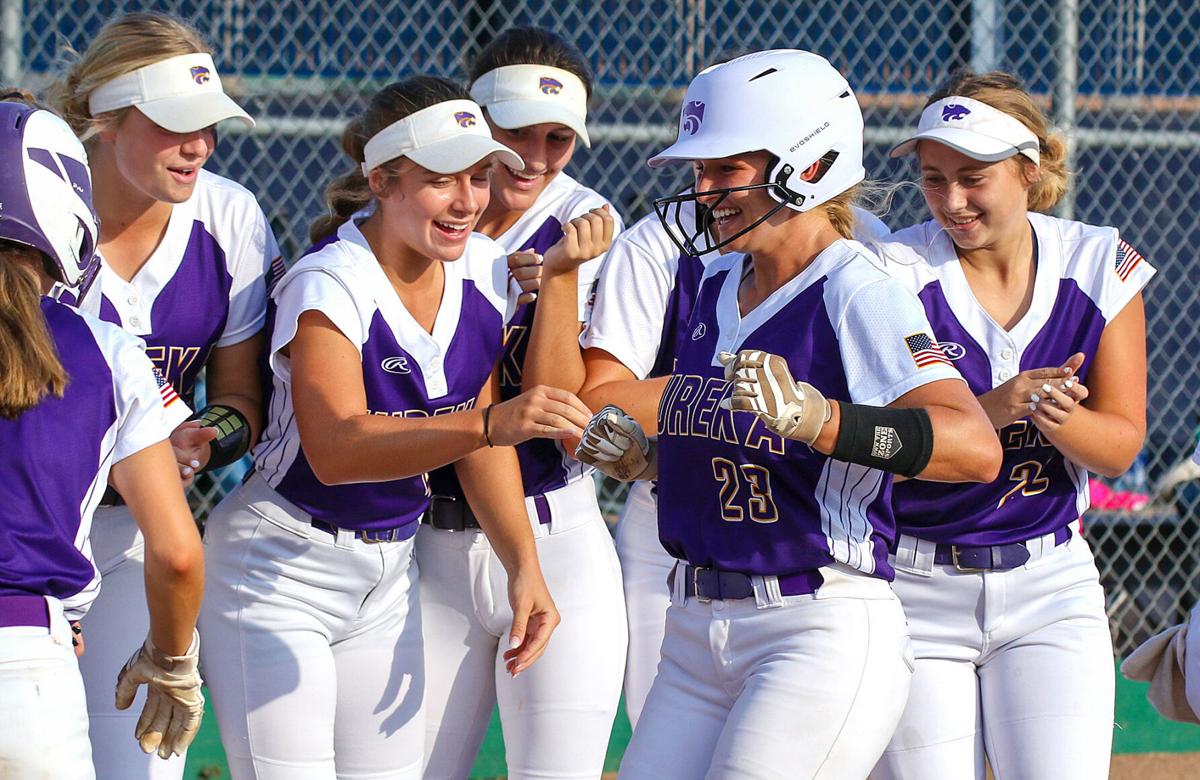 Eureka's Ali Phillips (23) is greeted at home by teammates after hitting a leadoff home run during a softball game against Marquette on Tuesday, October 5, 2021 at Marquette High School in Chesterfield, Mo. Paul Kopsky | STLhighschoolsports.com 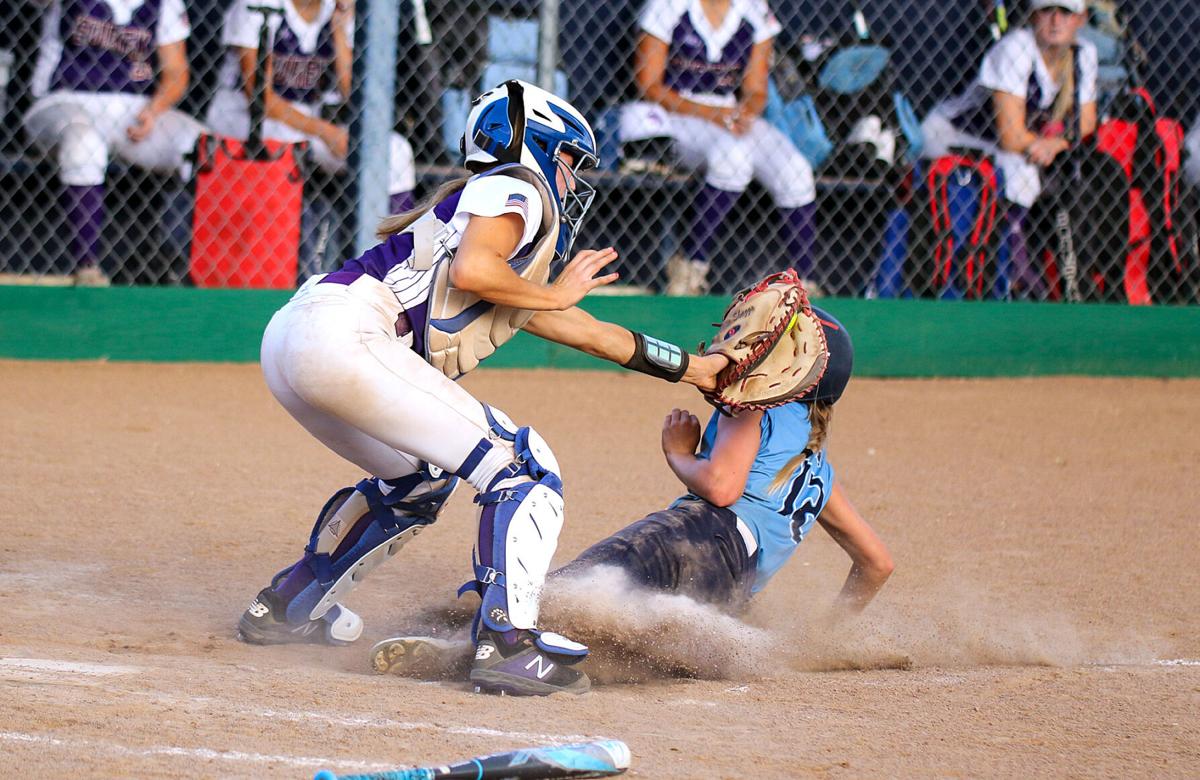 CLARKSON VALLEY — Ali Phillips wasn't sure how to react.

The Eureka High senior outfielder, known for her speed and ability to get on base, smashed the first home run of her high school softball career leading off Tuesday's game at Marquette.

"Just running around the bases and not having to go real hard — it was so cool," Phillips said.

That coolness continued throughout the afternoon.

Phillips reached base three times and also gunned down a runner at the plate from center field to help the Wildcats to an 8-1 win in the Suburban Conference Yellow Pool showdown at Marquette.

Eureka, one of the hottest teams in the state, recorded its 10th win in a row for the second time this season.

The Wildcats (20-1 overall, 5-0 conference) have outscored their opponents 197-46 this year and head into postseason play next week with plenty of momentum.

"The top half of our lineup has done a really good job of getting things going for us," Eureka coach Mark Mosley said. "That was the case again (Tuesday). It was a really good all-around effort. I was pretty proud."

Phillips set an early tone by ripping the fourth pitch of the game over the wall in left-center to give her team a lead it didn't relinquish.

"Seeing my team at (home plate) to greet me was a great moment," Phillips said. "Something I'll never forget."

Phillips, who came into the game with a .405 on-base percentage, hits out of the leadoff spot in the batting order and her normal role is to work the pitcher and see as many different offerings as possible.

"She doesn't have the highest average on the team — or the most power," Mosley said. "But she works really good at bats and gives our hitters information. She's just a smart hitter."

Phillips also turned in the defensive play of the game, maybe the biggest of the entire season for the Wildcats.

Marquette (21-8, 3-3) had climbed to within 3-1 in the third when Jess Willsey hit a single up the middle that could have brought the hosts to within one run.

But Phillips fielded the line drive cleanly and immediately uncorked a one-hop seed to the plate to get Marquette speedster Carle Bachman on a bang-bang play.

"Her throw was right on the line," Skaggs said. "It hoped and it was right there. It was big. It was just a different kind of thrill."

The inning-ending out kept the lead at two runs and switched the momentum back over to Eureka.

Phillips plans on continuing her career in college with a smaller yellow ball. She is a standout lacrosse player and is mulling numerous opportunities.

Sophi Mazzola added run-scoring singles in the third and fifth innings before her two-run homer. The sisters were a combined 5-for-8 with five RBI.

The Wildcats flashed plenty of leather with a pair of web gems from shortstop Skylinn Pogue.

The two powerhouses both are in the Class 5 District 2 Tournament. The power-packed district also features Lafayette and Parkway South.

For now, bragging rights belong to the Wildcats although both sides have high hopes for the postseason.

"Every regular season game I look as a dress rehearsal for the postseason," Marquette coach Adam Starling said. "We'll be focused next week and ready to go."

Bachman had two hits for the Mustangs, who had a five game winning streak snapped.

ST. CHARLES — Emily Chadwick watched her teammates stave off the end of their season Saturday.

Troy knocks off Timberland for first district title since 2018

TROY, Mo. — The Troy Buchanan softball team has a magic number offensively that it likes to attain every game.

Bachman turns on the jets to help Marquette slip past Lafayette

Inman's blast propels Washington past Summit and into Class 4 quarterfinals

CHESTERFIELD — Myla Inman had no idea.

Timberland uses patience at the plate to knock off rival Holt

TROY, Mo. — Andy Zerr could tell his girls were anxious at the plate.

FESTUS — Kevin Lucas already was thinking of what play to draw up with two runners on and one out.

ST. CHARLES — Kylie Runion somehow lost track of the softball amidst all of the hoopla and celebration.

Kevin Halley beamed with pride as he watched his St. Pius X softball team successfully tackle one obstacle after another during the regular season.

Eureka's Ali Phillips (23) is greeted at home by teammates after hitting a leadoff home run during a softball game against Marquette on Tuesday, October 5, 2021 at Marquette High School in Chesterfield, Mo. Paul Kopsky | STLhighschoolsports.com