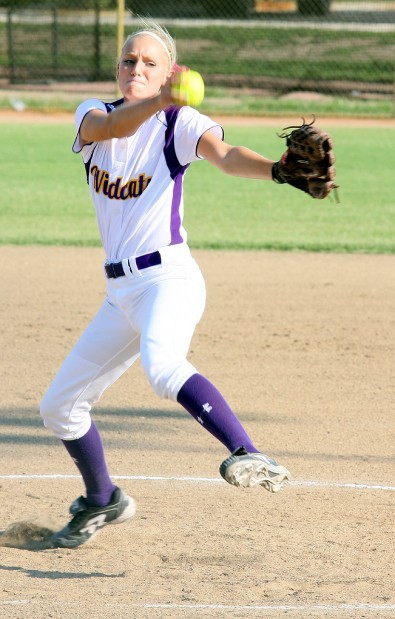 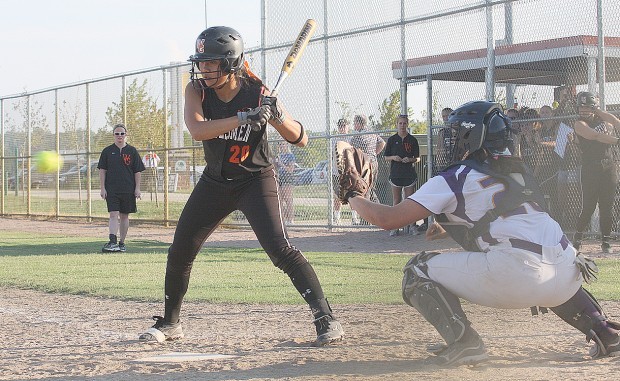 Eureka catcher Syd Tockman prepares to catch a pitch that goes by Webster Groves batter Emma Buckles during the Suburban South/West Tournament championship on Thursday, August 30, 2012 at Chesterfield Athletic Association in Chesterfield, Mo. In addition to catching, Tockman drove in the game-winning run with a squeeze bunt. (Jim Faasen | STLhighschoolsports.com)

CHESTERFIELD • Eureka catcher Syd Tockman had the chance to atone for a mistake when it mattered most, and she didn’t let the opportunity pass by.

After committing a throwing error to allow Webster Groves to tie the game, Tockman provided the walk-off squeeze bunt to give Eureka the 2-1 win in the Suburban South/West Tournament championship Thursday at the Chesterfield Athletic Association.

“I needed to prove to myself -- and to my team -- that I could pick us back up,” Tockman said. “We’re all about picking each other up, so we try and not ever get down. I just tried to flush that (error) and do what I had to do the next chance I got.”

With the game tied at 1, pinch runner Kristin McIntyre on third base and one out, Tockman laid down a perfect squeeze bunt on the first pitch she saw from Webster Groves pitcher Emma Buckles.

Tockman dropped the bunt between the oncoming first and third basemen to score the game-winner for Eureka (6-0, No. 2 in the STLhighschoolsports.com large-schools rankings) without a play.

“I was pretty nervous about making that (squeeze) call with one out there,” Eureka coach Mark Mosley said. “They were drawn really far in, and it was a gutsy bunt by (Tockman). It’s a risky call on my part, so I’m glad she executed, or it would have looked pretty bad.”

The decisive run came two innings after Webster tied the game in the top of the fifth.

The Statesmen (5-1, No. 9 LS) got things going with a Joey Smith leadoff single. She moved to third after a Kyra Navia bunt was mishandled and scored when Tockman’s pickoff attempt went awry.

Tying the game, even though the win wasn’t meant to be, was something one Webster player was happy about.

“We played really well,” Buckles said. “I think we came out here and made a point after losing really bad to them last year. It was a good game.”

Eureka took the initial lead in the bottom of the third. Jessica Poore ripped a one-out single, stole second and scored when Jamie Fowle stroked a 1-2 pitch down the left field line for a run-scoring double.

“That was a big, solid hit,” Mosley said. “Hits were pretty scarce at that point. It was big.”

She pitched all seven innings, allowing one run on six hits. She also struck out nine, while walking one.

The effort was big for Krumrey, especially considering how she felt headed into play.

“I was a little nervous,” Krumrey said. "It is just the history we have on this field, in this tournament.”

“It was a suicide squeeze, and it (hurt),” Krumrey said. “It actually felt good to do that against a team this year.”

Buckles suffered the loss for Webster Groves. She allowed six hits and struck out four with one walk.

Eureka catcher Syd Tockman prepares to catch a pitch that goes by Webster Groves batter Emma Buckles during the Suburban South/West Tournament championship on Thursday, August 30, 2012 at Chesterfield Athletic Association in Chesterfield, Mo. In addition to catching, Tockman drove in the game-winning run with a squeeze bunt. (Jim Faasen | STLhighschoolsports.com)