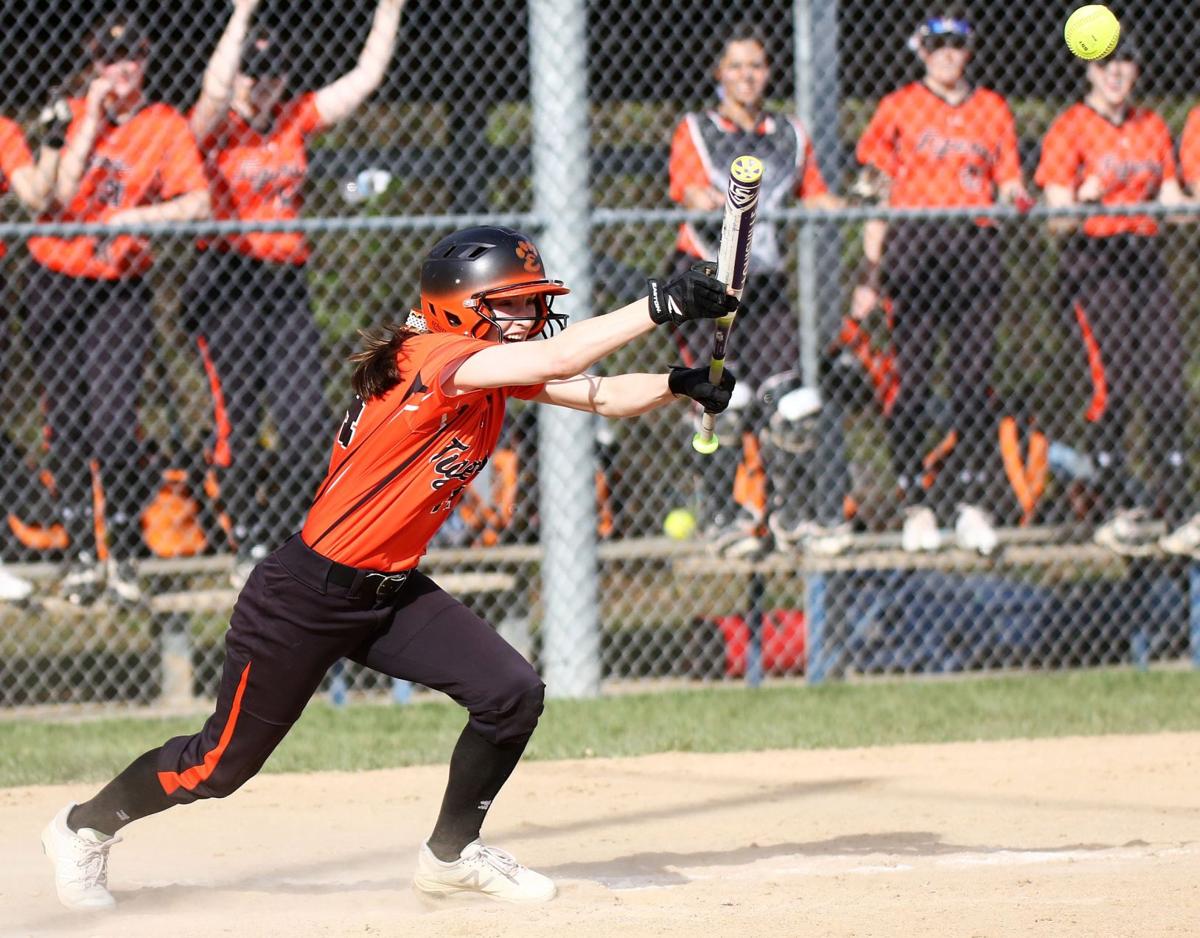 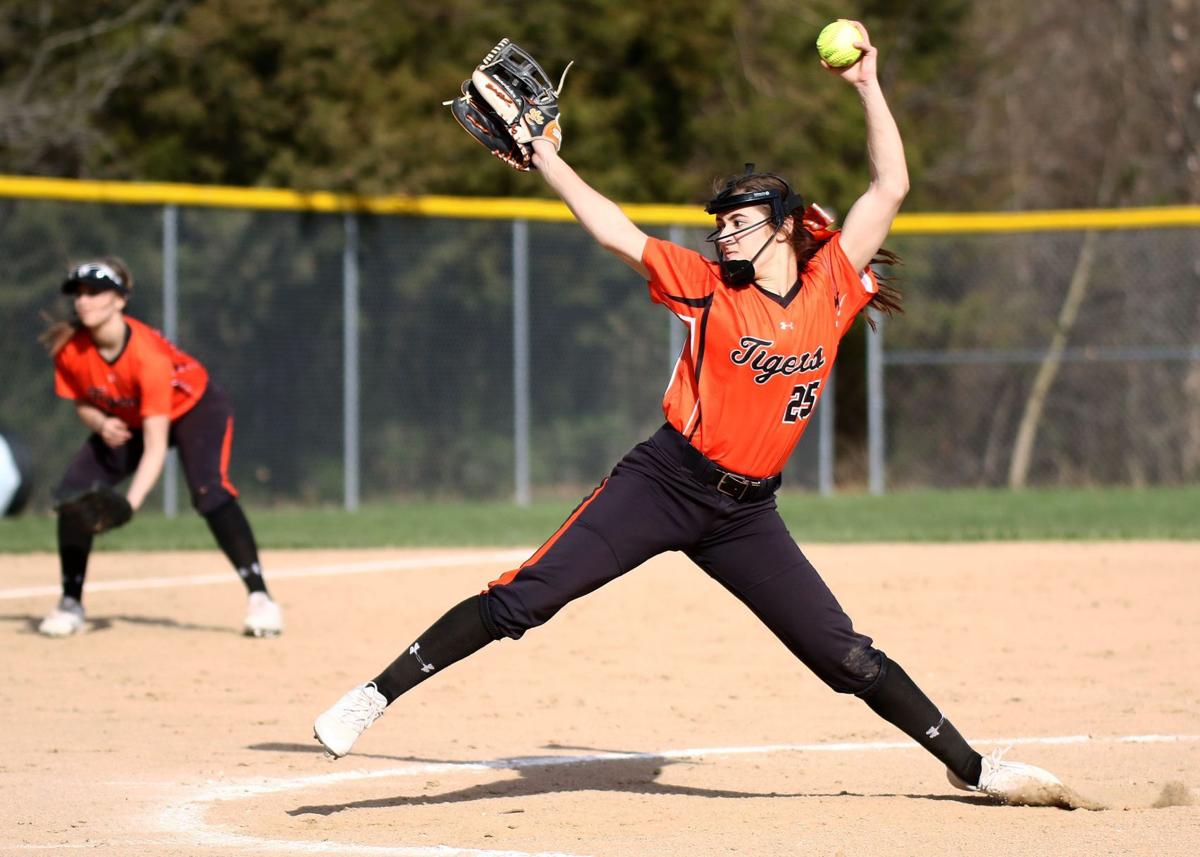 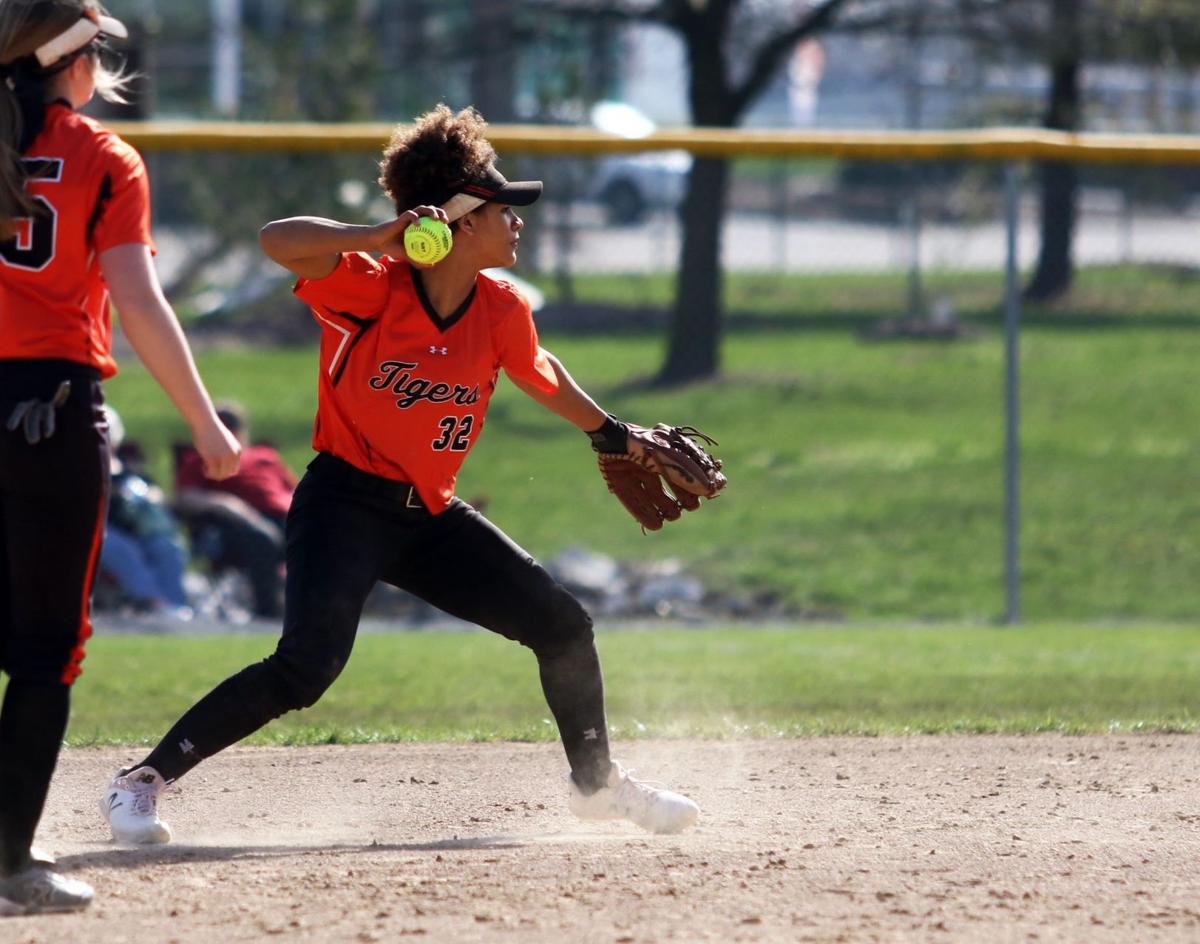 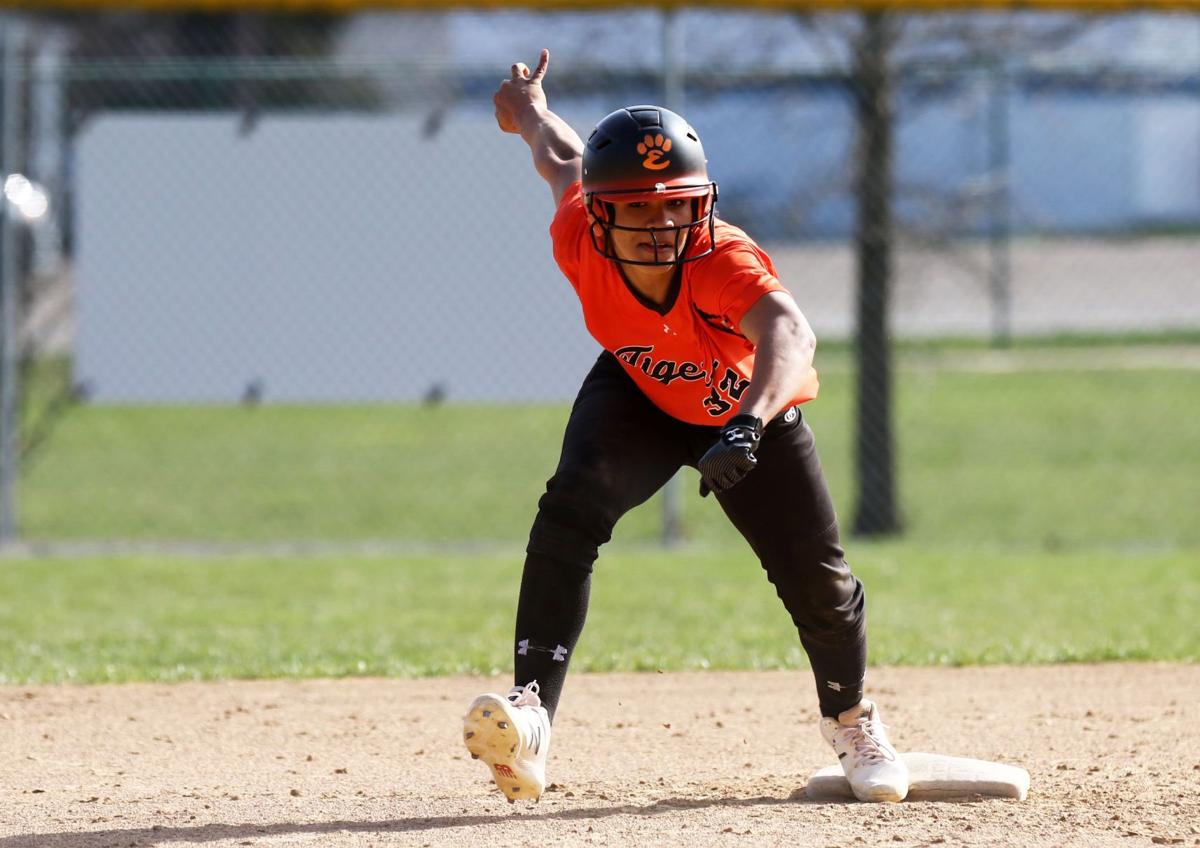 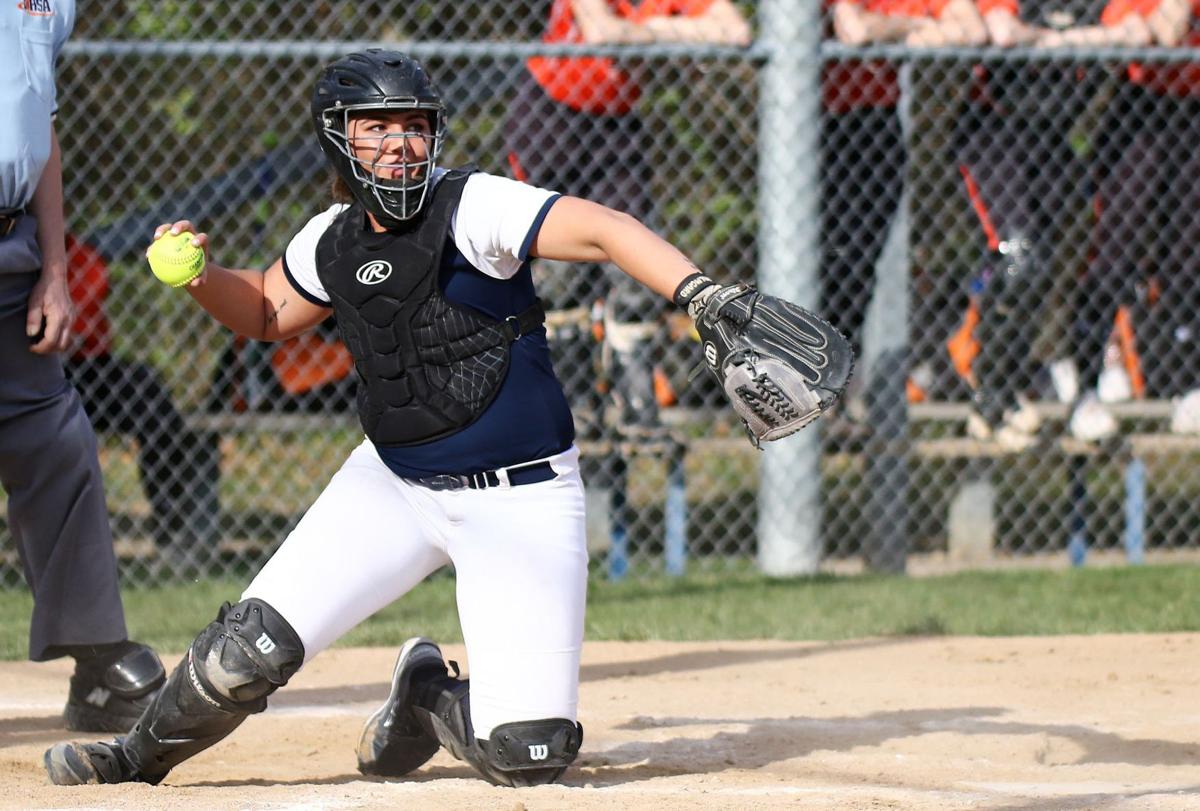 Alex Boze of Belleville East throws down to first base against Edwardsville in a Southwestern Conference softball game on Thursday, April 12, 2018. Paul Baillargeon, Special to SThighschoolsports.com 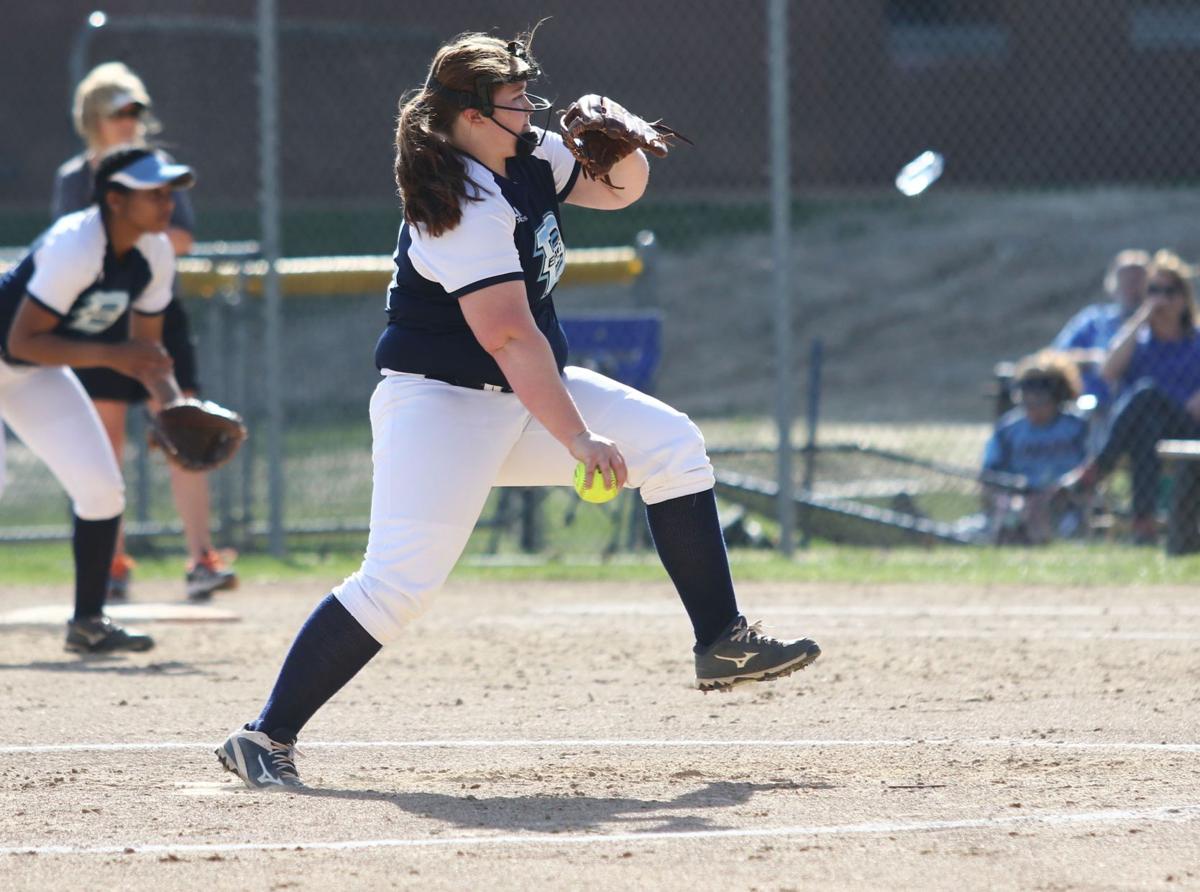 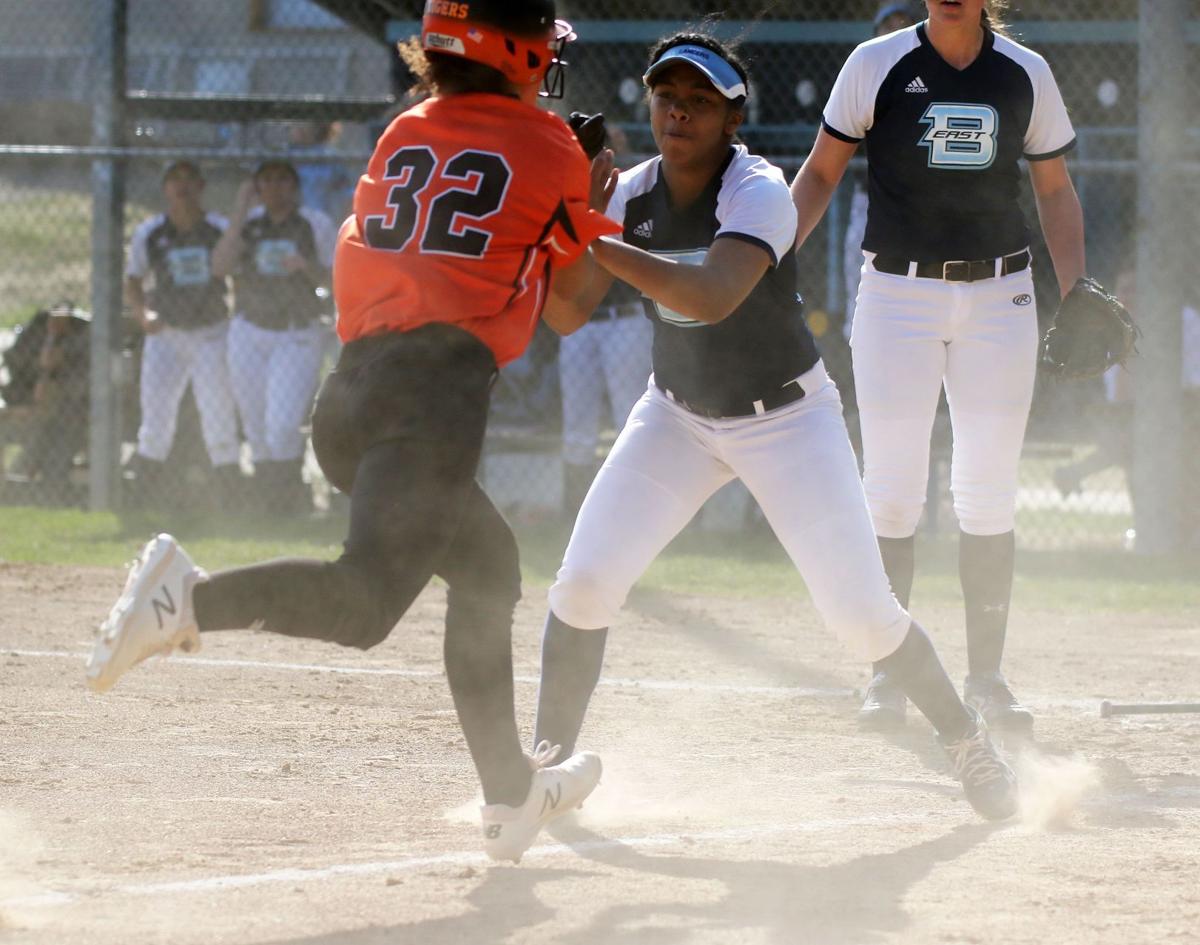 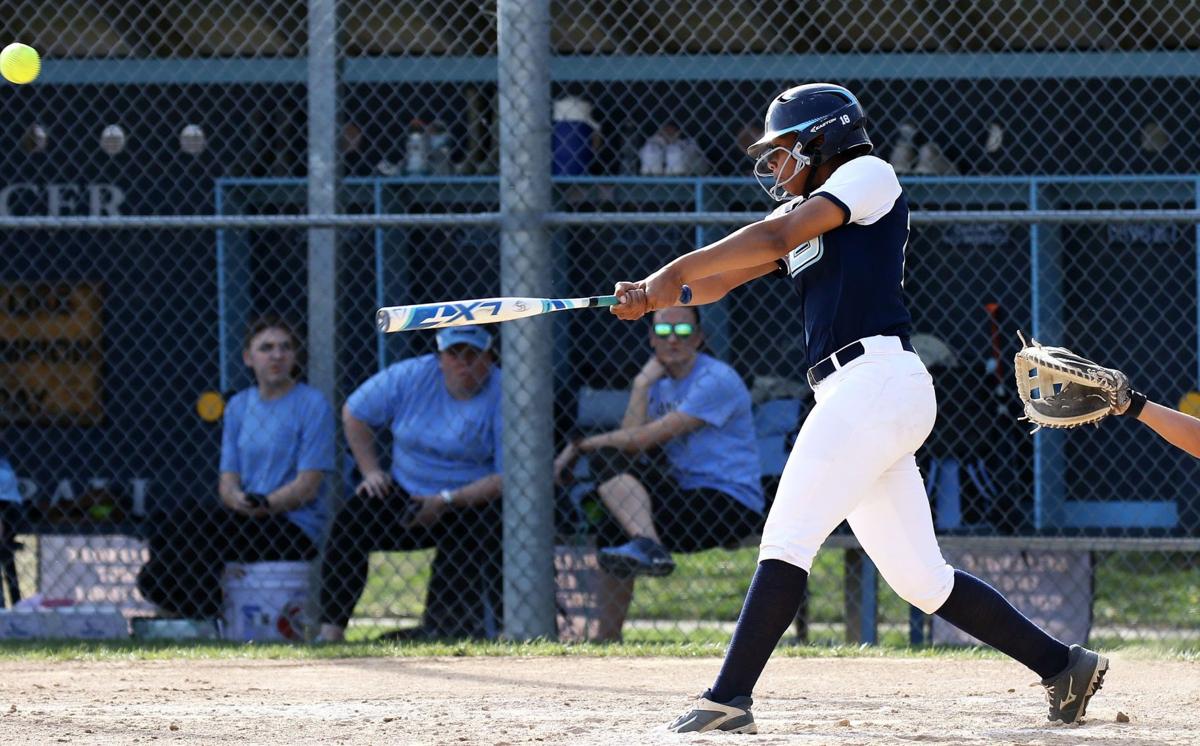 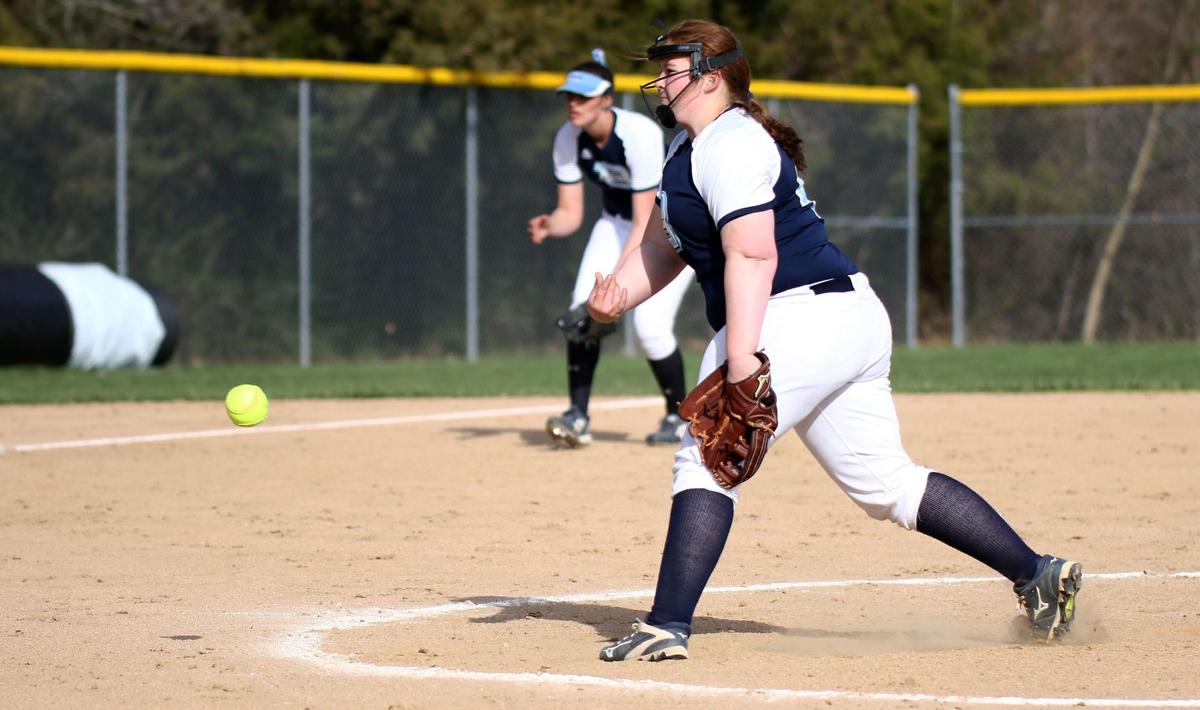 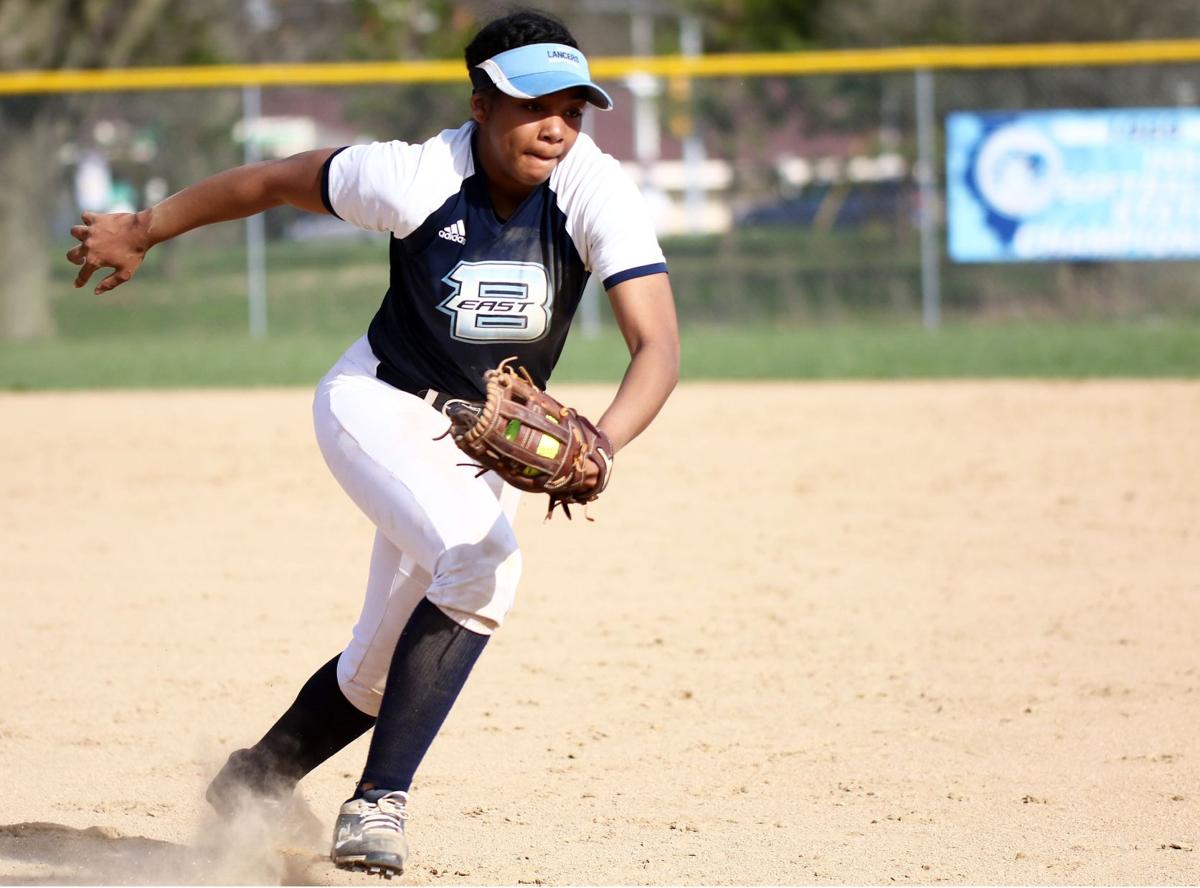 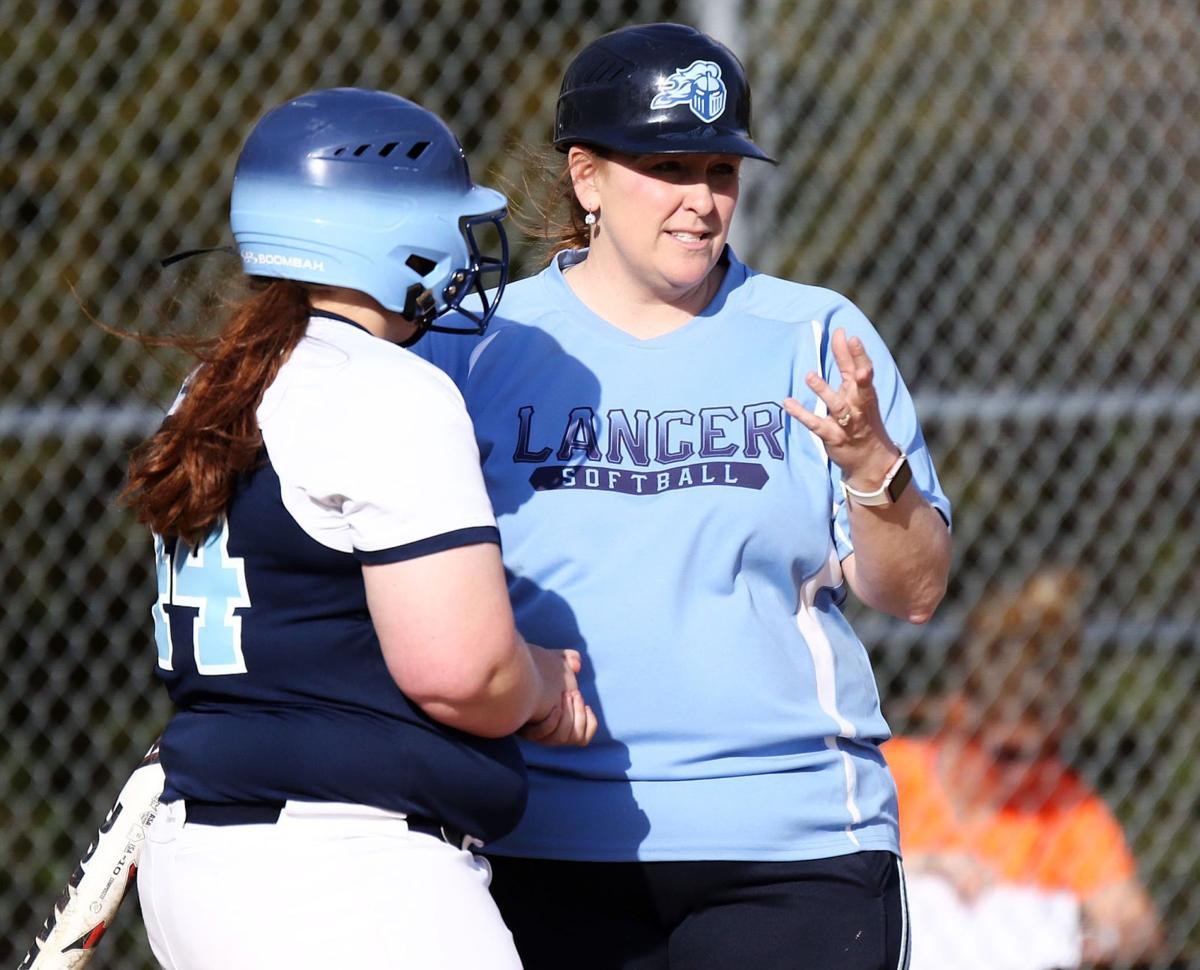 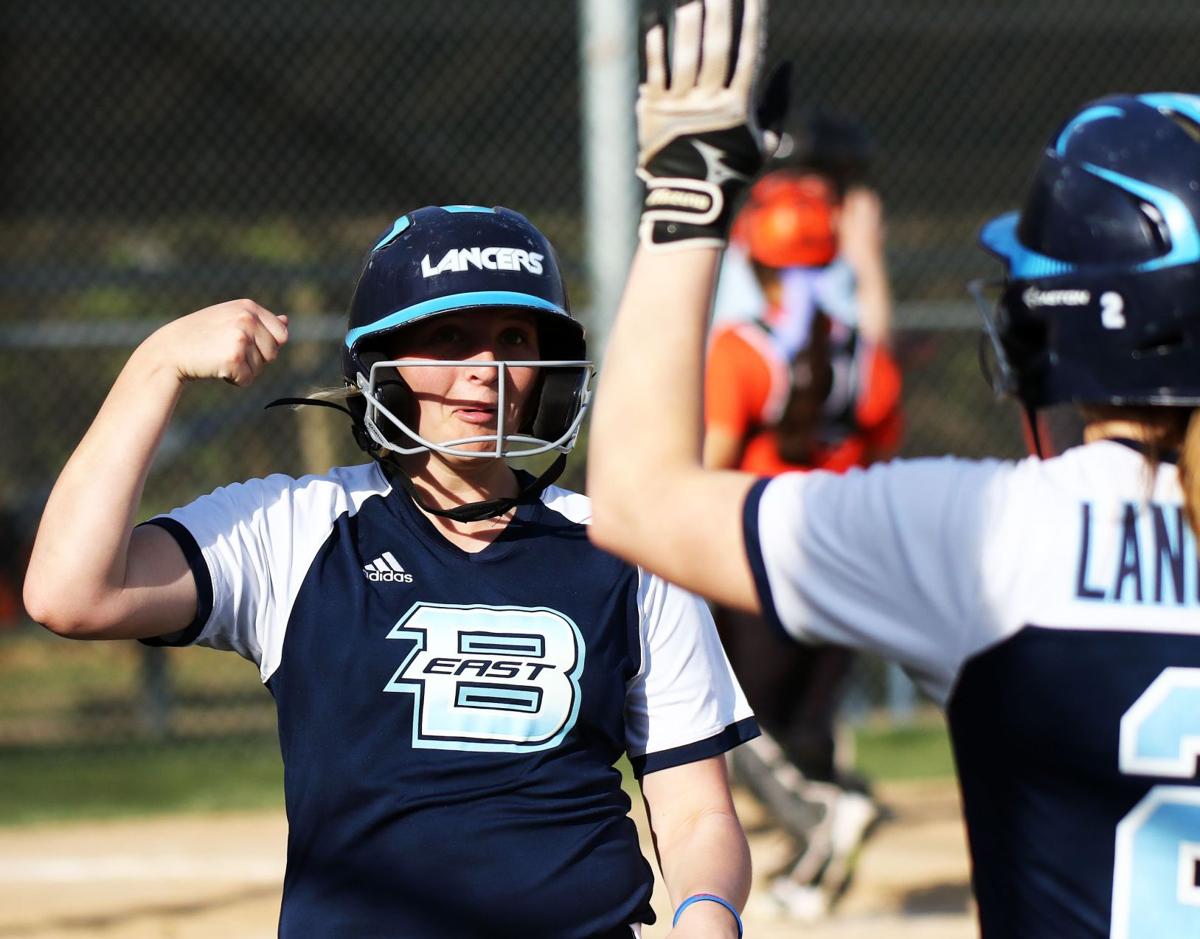 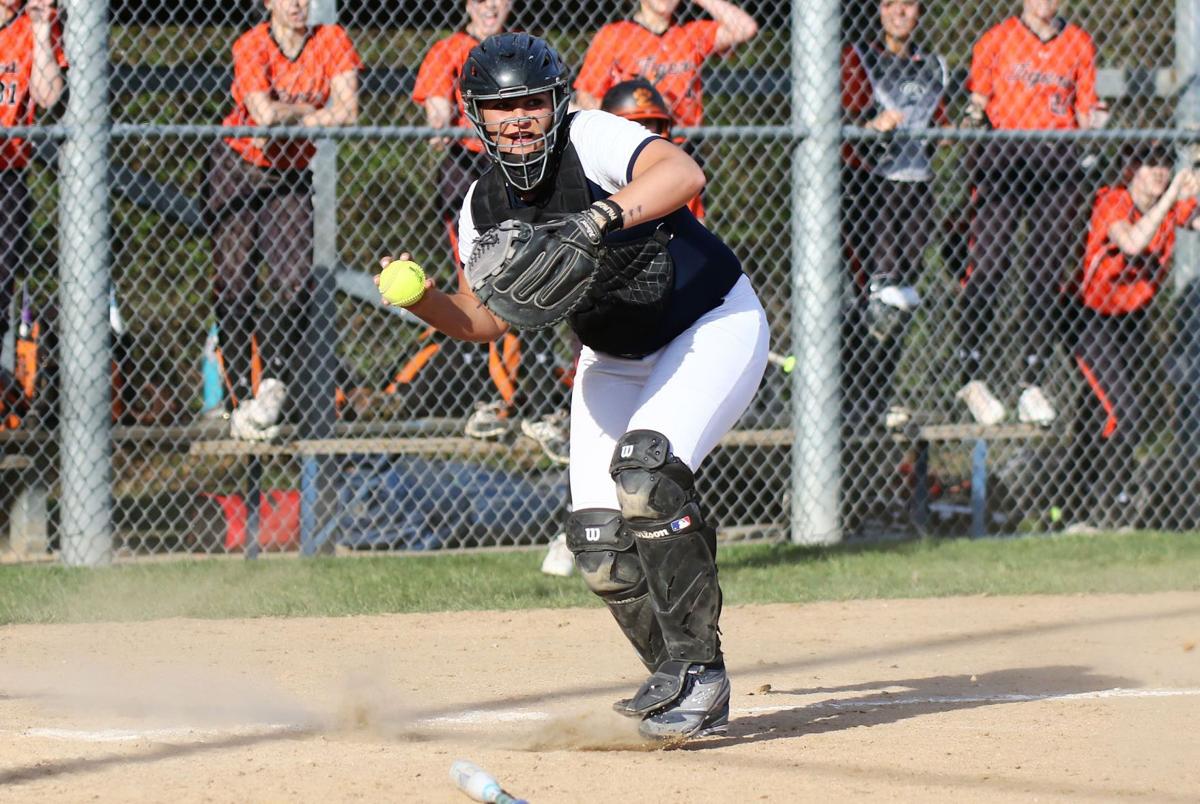 Alex Boze of Belleville East throws to first base against Edwardsville in a Southwestern Conference softball game on Thursday, April 12, 2018. Paul Baillargeon, Special to SThighschoolsports.com 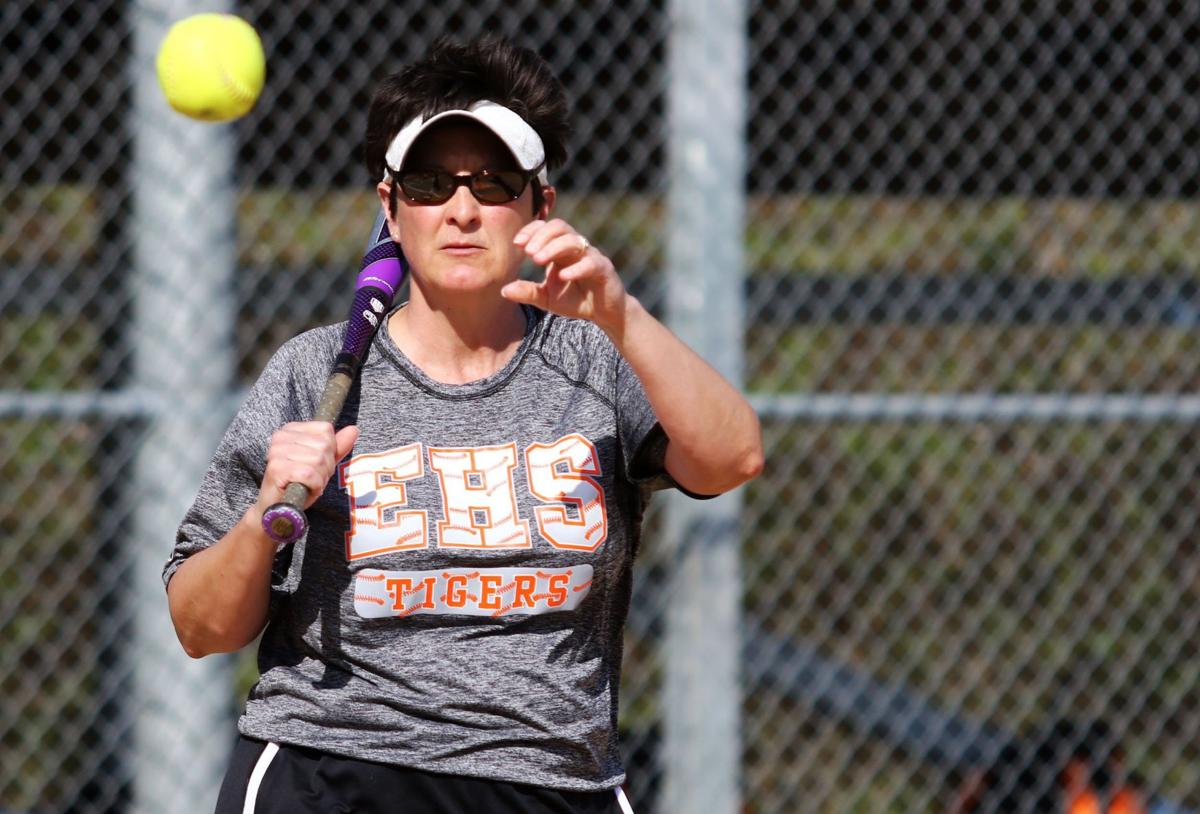 BELLEVILLE • Jordyn Henrichs wouldn't call it a jinx. Or a spell.

"For us, it's always a big game and we're always ready for them," Henricks said.

The Tigers were ready as usual on Thursday afternoon.

Edwardsville turned in one of its finest efforts of the season in dispatching Belleville East 8-1 in an early-season showdown between Southwestern Conference powers at East.

The Tigers recorded their 12th successive win over East to get a leg up in their attempt to win the SWC title for the sixth successive season. They have outscored the Lancers 102-25 during the 12-game run. East's last win in the series was a 4-2 triumph on May 29, 2013.

"It comes down to the small things," Edwardsville senior shortstop Anna Burke said. "Against them, we always seem to get a bunt down, or move a runner over. The little things make a difference."

The Lancers came into the contest determined to change the trend. They carried a 9-2 mark and had won eight of their previous nine contests. Edwardsville, on the other hand, lost two of its previous three and appeared on a downward slide after dropping a decision to Triad on April 6.

But the Tigers woke up at the right time and capitalized on seven East errors to get the job done once again.

"We executed today much better than what we have been," Edwardsville coach Lori Blade said. "We had the right mental approach today. This is what I expected us to be the whole time."

Edwardsville played small ball the entire afternoon, using an array of bunts to force East into one fielding mistake after another. Six of the Tigers' runs were unearned.

"Edwardsville is all about going on runs," East coach Natalie Peters said. "If we let them go on one of their runs with horrible defense, it's going to be a long night like it turned into tonight."

The Tigers (4-2, 3-0), the No. 1 team in the STLhighschoolsports.com large-school rankings, pushed across three runs in the fourth inning by hitting just one ball out of the infield. A trio of errors and some heads-up baserunning did the trick. Henricks started the uprising with a leadoff single. Two runs came around on a throwing error before Maria Smith added a sacrifice fly to cap the blitz.

East plated its only run in the fourth on hits by Jackie Belzer and Jasmine Poore and Stephanie Bigham's bases-loaded walk.

"I think we know we can be better than we have been," Henricks said. "Today, we finally showed it."

The Lancers (9-3, 2-1), No. 2 among large schools, played excellent defense during the first three innings including web gems from Alyssa Krausz at short and Mackynzee Dalle in right field.

But that defense failed them over the final four innings.

"A lot of times, they don't beat us, we beat ourselves," East standout catcher Alex Boze said.

The Tigers, who have won 43 of 45 league games over the past three-plus seasons, are in the early-season drivers' seat for now.

But Blade, the veteran coach, still feels East is the team to beat.

"I think that's the best team in the area, I really do," Blade said. "Their lineup, the pitching and defense they have, they're as good as anybody else around."

Peters remains frustrated by the Lancers inability to play well against the Tigers.

The teams are scheduled to meet again May 8 at Edwardsville.

Alex Boze of Belleville East throws down to first base against Edwardsville in a Southwestern Conference softball game on Thursday, April 12, 2018. Paul Baillargeon, Special to SThighschoolsports.com

Alex Boze of Belleville East throws to first base against Edwardsville in a Southwestern Conference softball game on Thursday, April 12, 2018. Paul Baillargeon, Special to SThighschoolsports.com