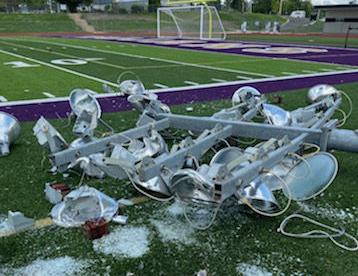 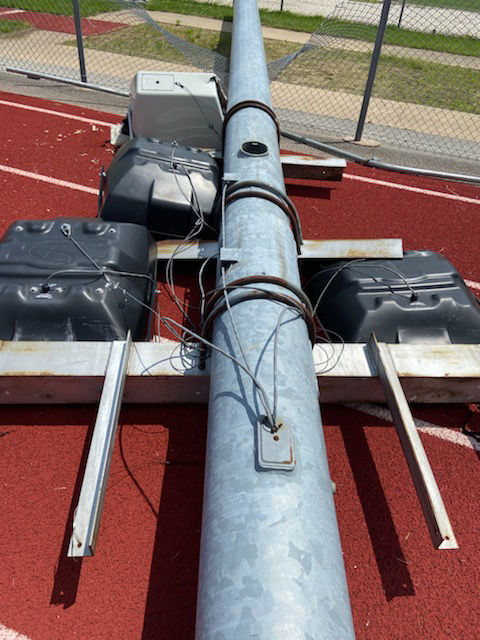 Parts of the Troy Buchanan High School track and football field were damaged Monday when a storm blew into the area.

Jason Smith, the school's athletics director, said a light pole was uprooted by heavy winds and landed on the track and the artificial turf of the football field.

“It was a crosswind that hit it just right,” Smith said. “It snapped it at the base. It didn't uproot (the entire pole). (The crosswind) pulled it through a fence, across the track and onto the field. We've had a couple of unfortunate incidents. There have been some unlucky circumstances.”

The football field was renovated prior to the 2019-20 school year.

Smith said the work to fix the damage should be minimal. He said he's not sure of the extent of the work that will be necessary until debris is removed, including glass from broken light fixtures.

“I don't think it will be real hard to fix,” Smith said. “Right now, we're working with lighting companies and for our turf company to come back in and do repairs to the field and the track.”

The incident marks the second time in the last four years the department has had to deal with a natural occurrence affected the school. A portion of the Troy athletics facilities was destroyed by fire in Feb. 2016.

The area affected by the blaze that year housed the school's weight room, coaches offices, classrooms, storage and locker rooms. It has since been rebuilt.

Skordos comes out of retirement to coach Timberland

Mike Skordos thought he had walked the sidelines for the final time two years ago.

MSHSAA is expanding the number of classifications in 10 sports.

Jerry DiSalvo's array of soccer experiences could serve him well as the new boys coach at Alton Marquette High.

Clynes previously coached the Panthers from 2008-2015.

SAUGET, Ill. — Josh Dima made as much of an impression as he could Monday on the Belleville West baseball program.