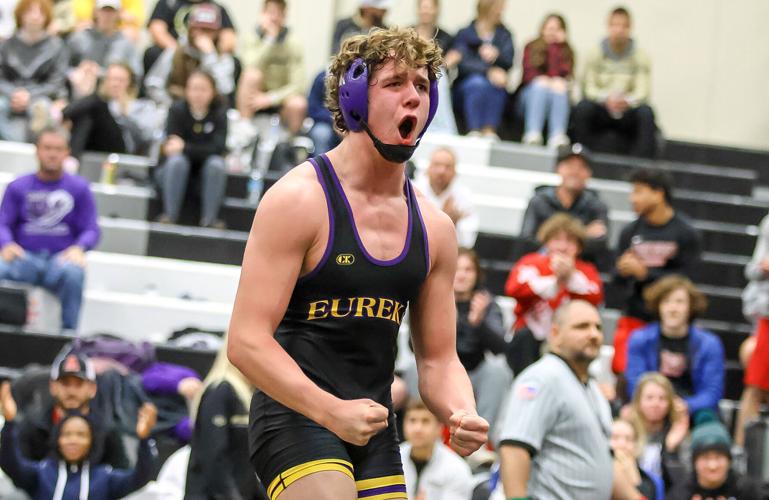 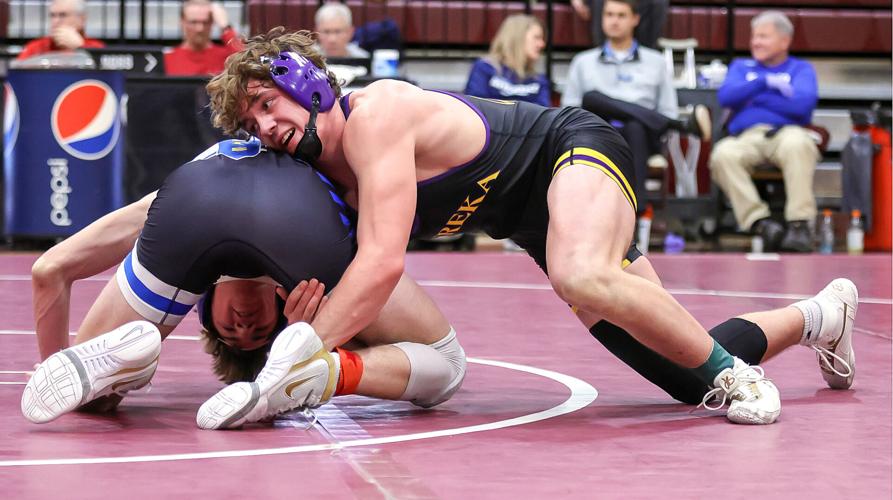 Eureka junior Ryan Thornhill could not get himself excited for wrestling season.

An all-district outside linebacker who led the 9-win Eureka football team in tackles, Thornhill felt the sting of an early exit from the playoffs at the hands of MICDS in the Class 5 District 2 championship game.

“Coming off football, I really wasn’t in the best mood," Thornhill said. "I didn’t really feel like wrestling.”

So Thornhill did the one thing he knew would get him pumped up for the season.

“Watching Rocky III put me back in my place,” Thornhill said. “I strive to be like Rocky. He’s my idol.”

The Italian Stallion would have been proud of the comeback story Thornhill produced during the 165-pound championship match Jan. 7 at the Lafayette “Fred Ross” Invitational.

“Down 9-0, there’s a voice in your head that wants you to quit and is telling you, there’s nothing you can do,” Thornhill said.

Thornhill faced similar deficits against state-runners up Santino Robinson of Mascoutah and David Cross of Francis Howell Central. Both times his opponents extended the lead and won by technical fall.

This time, Thornhill ignored the voice.

“I wouldn’t say that I knew I could win, but I was going to keep trying to get points and trying to work my way back into the match,” he said.

Thornhill earned a pair of takedowns late in the second period and kept the momentum into the third, tying the score in the final 10 seconds to send the match into overtime.

“Everyone was done watching, but he stayed in that match,” Eureka coach Luke Gentry said. “They started paying attention towards the end.”

With spectators standing in amazement, Thornhill secured the overtime takedown to earn an improbable 13-11 win and a rousing ovation from the crowd.

“I just walked into the hallway and started yelling," Thornhill said. "I’ve never been that excited after a win.”

Thornhill qualified for the state tournament each of his first two seasons, going 1-4 in those matches.

Gentry believes the match against Simcox may be the springboard for a great postseason for Thornhill.

“That was his defining moment, a moment that said, ‘I can compete with the top kids in the state, even when I’m down 9-0,’ ” Gentry said. “That is a state-placing caliber win, and it created some ammo for me to inspire our whole team, preaching to these kids to find your moment.”

The following weekend at the St. Charles West Invitational, Eureka junior Andrew Stubblefield trailed 7-2 late in the third period to Mehlville senior Caleb Gardner, who entered the match with a 31-1 record.

Stubblefield found his moment, tying the match in the final minute before winning 9-7 in overtime to capture the 132-pound championship.

“This win will build onto the next one,” Stubblefield said. “I’ll keep on going and hopefully I’ll get to state and place.”

For the three-sport athlete Thornhill, the difference between participation in wrestling and participation in sports like football and baseball is the isolation, with wrestling performance dependent more on individual sacrifice than team chemistry.

“During the wrestling season, it’s almost dark. I feel like Batman in the bat cave all by myself,” Thornhill said. “You’re alone more, and I like that feeling. You have to get in the mindset that you’re almost on your own and you have to work on yourself.”

That self-reflection has helped Thornhill become a better leader for his teammates.

“He was kind of quiet at the beginning of the season, but he’s really stepped up in these last couple of weeks as a vocal leader in the room. The whole team is having more fun it seems,” said Gentry, who is in his second season leading the Wildcats after two years as an assistant.

Thornhill, who wrestled at 138 pounds as a sophomore, is wrestling in the 165-pound weight class this season. He struggled at first, placing fourth at the Ed Felker Scramble and fifth at the Fort Zumwalt East Invitational, but consecutive titles at the Fred Ross and St. Charles West tournaments have set him on a confident path.

“He was getting frustrated early on because he was getting gassed quickly. His body was adjusting from all the muscle and all the weight he was putting on,” Gentry said. “He’s got the technique of the little guys, but now he’s bigger. As you get higher up the weight classes, it’s less technique and more raw power, and he’s got both now.”

He also can win matches that seem impossible, like Rocky.

“I feel like I have a lot of heart. If I can make a match close, I feel like I can come out on top,” Thornhill said. “And I have a much better chance this year, because I can stay in close matches with the top kids.”

Thornhill, who sports a 4.7 grade point average, said wrestling season can be lonely with a life consisting mostly of school, practice, homework and sleep, with wrestling tournaments occupying the weekends.

But his defining moment at the Fred Ross Invitational has given Thornhill the eye of the tiger for the remainder of his wrestling season.

“Sometimes it doesn’t seem worth it, but after feeling that win, I know what I’m wrestling for now,” Thornhill said. “Wins like that make it all worth it.”

ST. CHARLES — Cole Ruble remembered the discomfort of the second step on the podium.

Significant changes on tap for wrestling, including two classes for girls in Missouri

WILDWOOD — Lafayette junior Dylan Roth had a suspicion he was nearing a milestone, but the evidence stayed hidden.

GRANITE CITY — Troy Buchanan senior Brett Smith felt the fatigue, saw the clock and heard a familiar voice near the end of his 170-pound champ…