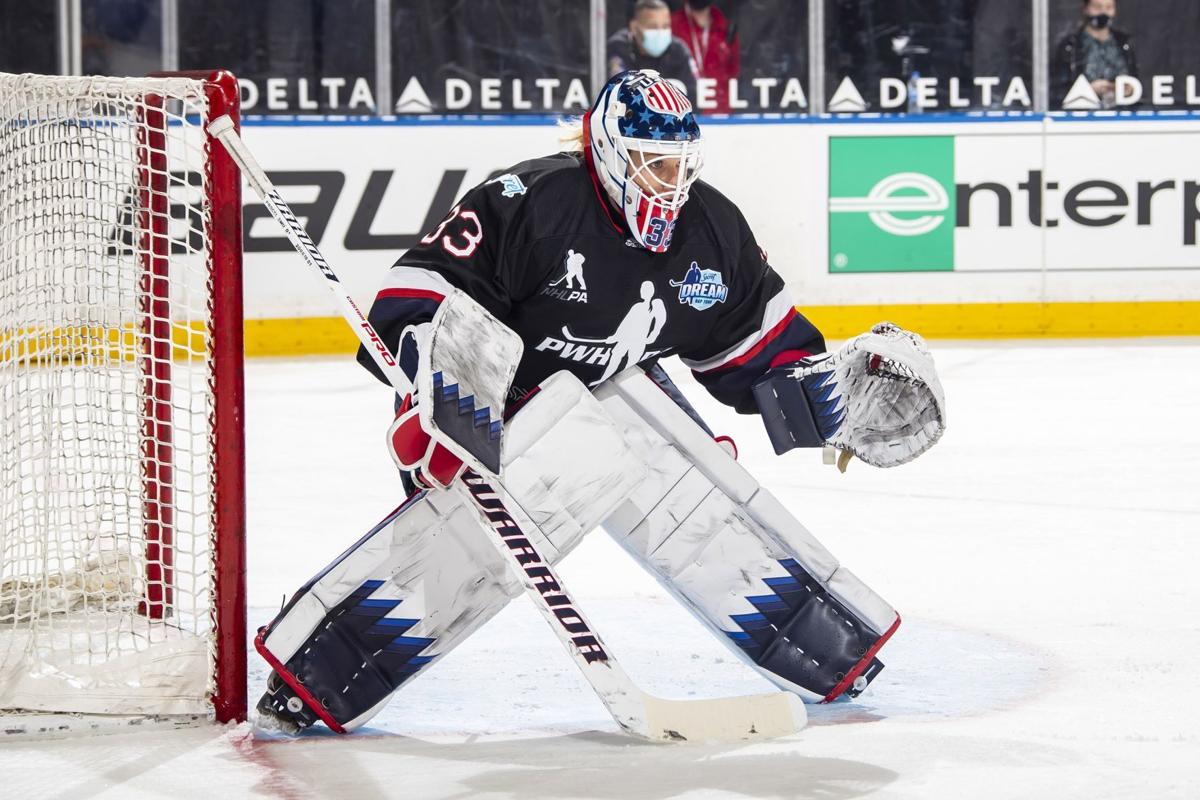 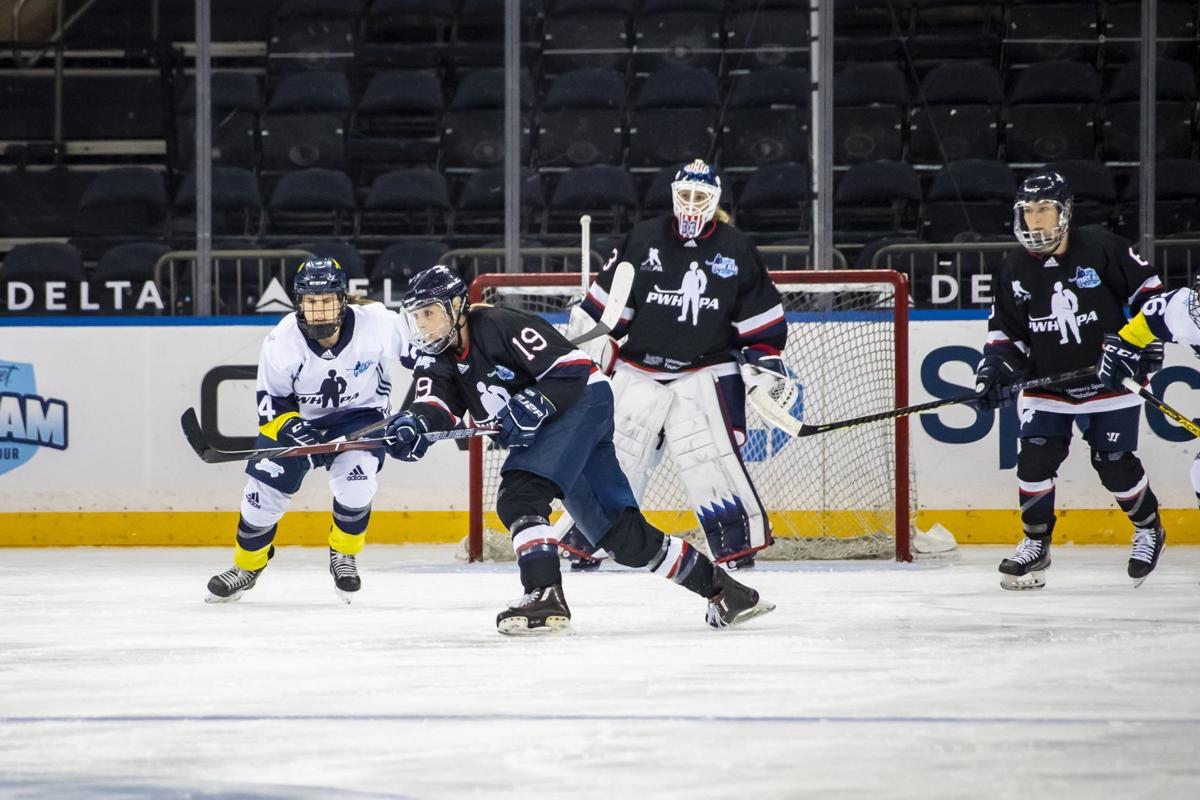 Alex Cavallini has lived in St. Louis only since October but she’s already learned the fascination her last name holds among St. Louis hockey fans.

Cavallini has had a very distinguished hockey career, winning a gold medal as a goalie on the U.S. women’s hockey team at the 2018 Winter Olympics, as well as at five world championships, but that was as Alex Rigsby. Then she married Aidan Cavallini, son of former Blue Gino Cavallini, nephew of former Blue Paul Cavallini, moved from Wisconsin to St. Louis (with a brief stop in New York) and entered a new world.

“It definitely comes with its perks,” she said. “It’s funny. It’s been really awesome to be embraced by the St. Louis Blues organization and they’re calling me part of their alumni group and that’s been awesome to be with them. … Gino and Paul are such big names here in St. Louis.

“Gino helped move us into our house in October and the next day he dropped me off at the airport to go to our tryout camp with the USA team and I was checking in with my baggage and the agent saw ‘Cavallini’ and he said, ‘Do you know Gino and Paul Cavallini?’ and that was the start of it. I couldn’t wait to tell Gino. People are always so excited to say they watched them when they were younger.”

The newest of Cavallinis has charted her own hockey success story independent of her in-laws, and is actively pursuing the next chapter. She is part of the Professional Women’s Hockey Players Association’s Dream Gap Tour, which plays exhibition games Sunday at noon at Centene Community Ice Center in Maryland Heights and on Monday at 6 p.m. at Enterprise Center. The games will showcase some of the best women’s hockey players in the nation, players who have been largely idled over the past year because of COVID-19 in particular and the lack of opportunities for women hockey players in general.

Cavallini, for instance, has played in just two games since last March, both in earlier stops on the Dream Gap Tour. (She suited up for two others as the backup goalie.) The 2020 world championships were cancelled, and then the 2021 worlds were cancelled too, before criticism led to them being rescheduled from May to August, though where they’ll be played hasn’t been determined. That is not a lot of hockey for someone, at 29, in the prime of her career.

“We’ve had four games this year with the PWHPA and that’s four more than any international games we’ve had this year,” she said, “and so right now it’s our only opportunity to showcase our game. I think what is so important is to be able to get these young girls and fans able to see us play and just get ourselves on the radar in people’s minds here. I think the thing that’s gonna be so cool about St. Louis is it’s going to be our first place on the Dream Gap tour that we’re allowed to have fans, so we’re really excited to be able to play in front of fans again and we’re really looking forward to that. It’s just so important for women’s hockey in general just to showcase our ability.”

Cavallini got her start in hockey after her family moved from Northern California to Wisconsin when she was 5. Her brother signed up for hockey, she decided it looked like fun and after getting a chance to play goalie, she was hooked on the sport and the position. Back then, she had to play with boys teams — at one point coached by Gino Cavallini with her future husband as a teammate — and played boys hockey up until she started playing at the University of Wisconsin in 2010. Early inspirations were Manon Rheaume, the Canadian women’s goalie who played in a preseason game with Tampa Bay in 1992, and the gold-medal winning 1998 U.S. Olympic team.

“I thought being goalie was the coolest thing ever and it was so fun stopping the boys,” she said, “so I was pretty much hooked from that point forward, just begging my coaches to play goalie. … I’ve been very fortunate to be embraced in the hockey community and the gender doesn’t matter. I’ve been able to compete with the boys.”

She still does, from time to time. When she was living and training in Madison, Wis., she would sometimes go up against NHL players who lived in the area when they came home in the summer.

“It’s always kind of funny at first when I start seeing new guys,” she said. “They don’t know how hard to shoot. You can tell as they start amping it up and getting more comfortable shooting on me. It’s fun. It’s cool.”

With help from a stipend from USA Hockey and Aidan’s job as a financial advisor with Morgan Stanley, Cavallini is able to devote full time to training. She’s on the ice at Centene four days a week for about 90 minutes, working with goalie coach Jason Power, with more time spent working out off the ice. Next week, she’s off to Chicago to skate with some of her national team teammates, followed by the first tryout camp for the 2022 Olympic team. If she makes the cut on that, she’ll be off to residency camp in Blaine, Minn., from October to January.

The PWHPA’s goal is to establish a sustainable women’s league that pays a living wage. The group was formed after the Canadian Women’s Hockey League, where Cavallini played for one season, shut down in 2019. While Cavallini had a great time playing for Calgary, which won the championship, she figures she lost money on the season. The six-team NHWL, which played a two-week season this year because of COVID, is doubling its salary cap next season to $300,000 per team, but the PWHPA is trying to assemble something better.

“It’s sad that people aren’t able to witness the talent that we have on his team right now because we haven’t had the opportunities,” Cavallini said. “We’re just so excited for this weekend to be able to showcase the talent that everyone’s been working so hard on.”

He played seven seasons with the team and scored the overtime winner in Game 2 of the Stanley Cup Final with Boston.

UNIONDALE, N.Y. (AP) — With goalie Semyon Varlamov out of position in the closing seconds, New York defenseman Ryan Pulock knew he needed to get in the way of Ryan McDonagh's shot at the open net. It was the biggest play in the Islanders' latest series-tying Game 4 win.

UNIONDALE, N.Y. (AP) — After keeping up his scoring touch to help Tampa Bay get a big road victory its Stanley Cup semifinal series, Brayden Point was especially proud of the Lightning's defensive effort.

MONTREAL (AP) — Vegas goalie Robin Lehner took a rather unconventional method in getting fired up upon being informed he was getting the start in Game 4 of the Stanley Cup semifinal series against the Montreal Canadiens.

Rene Robert, a member of the Buffalo Sabres’ famed “French Connection Line,” died Tuesday at a Florida hospital less than a week after suffering a heart attack. He was 72.