In their first season, the Blues advanced to the Stanley Cup playoffs and beat the Philadelphia Flyers in seven games to get through the first round. In the semifinals, the Scotty Bowman-coached club faced the Minnesota North Stars. It became an epic series, with four of the seven games going into overtime.

The goalies were outstanding as the game remained scoreless until Walt McKechnie beat Hall to give Minnesota a lead with just more than three minutes remaining.

Forty-three seconds later, aging Dicke Moore scored for the Blues to tie it and send the game into overtime, again.

"I knew Dickie was going to score," teammate Bob Plager said later. "He was holding that stick tight as could be and he had this look on his face. He just had this special look."

The first overtime ended scoreless. But 2:50 into the second overtime period, Blues center Ron Schock got loose, broke in on Maniago and snapped a wrist shot past him to win the game 2-1 and send the Blues to the Stanley Cup Final.

Again, not the best conclusion. The Blues were swept in four games by Montreal, with each game decided by one goal.

Do you remember Maroon's magic?: A look back at the Blues history in Game 7s 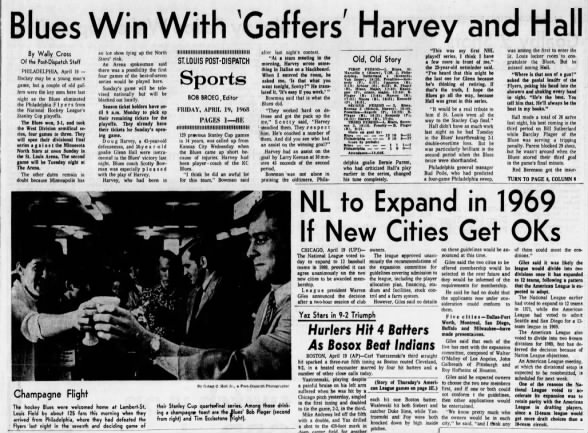 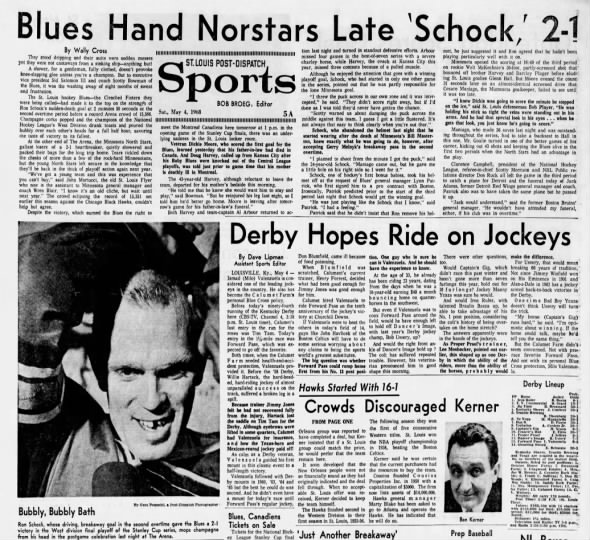 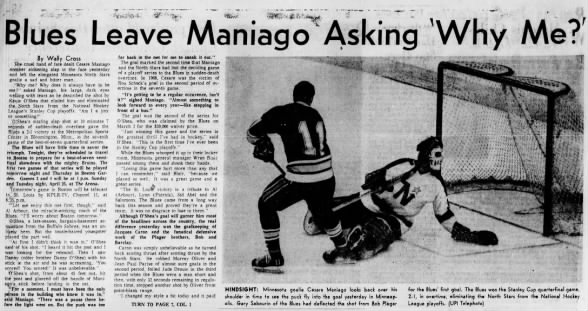 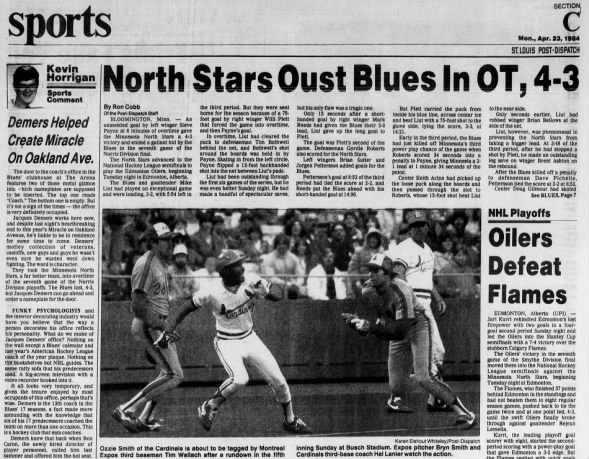 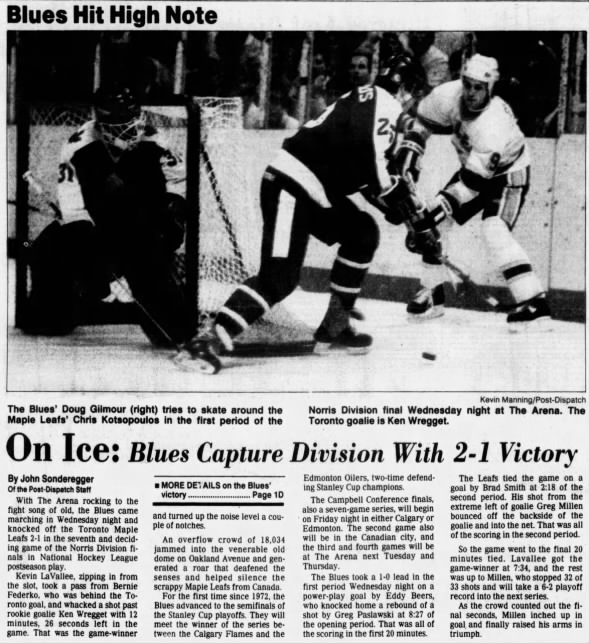 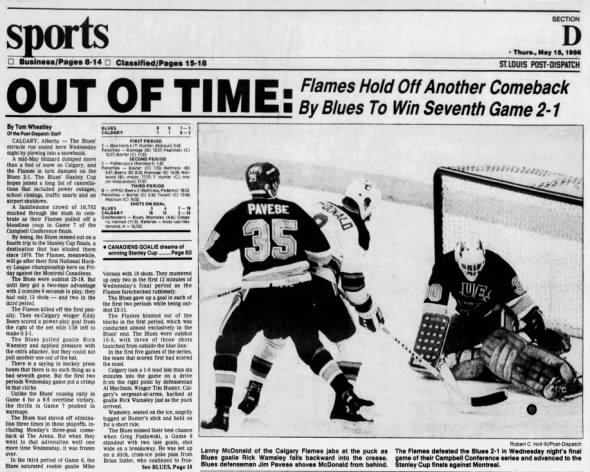 1990
Division finals
at Chicago
Lost 8-2
In Blues' playoff lore, it's known as the Monday Night Massacre. 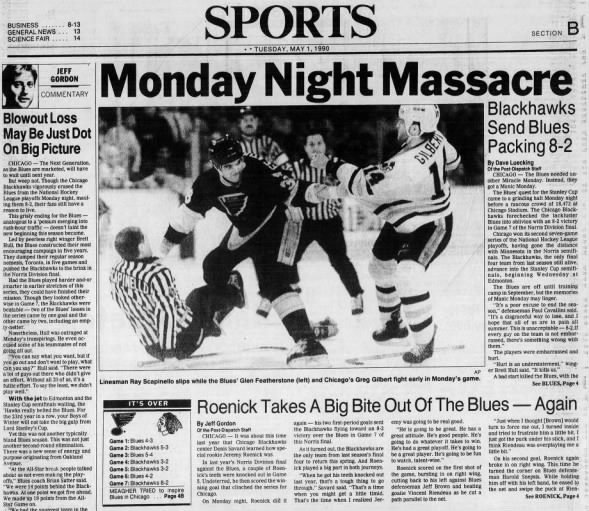 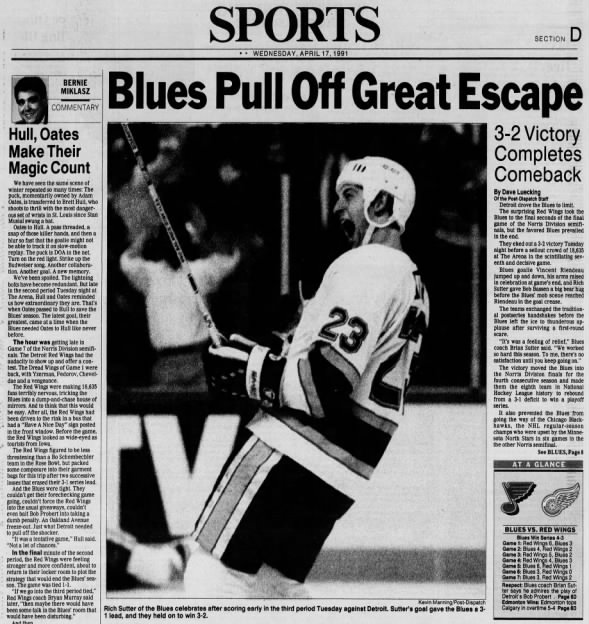 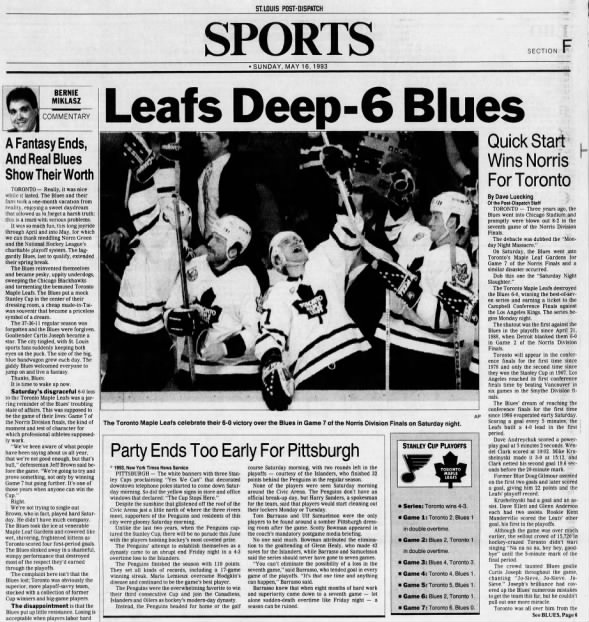 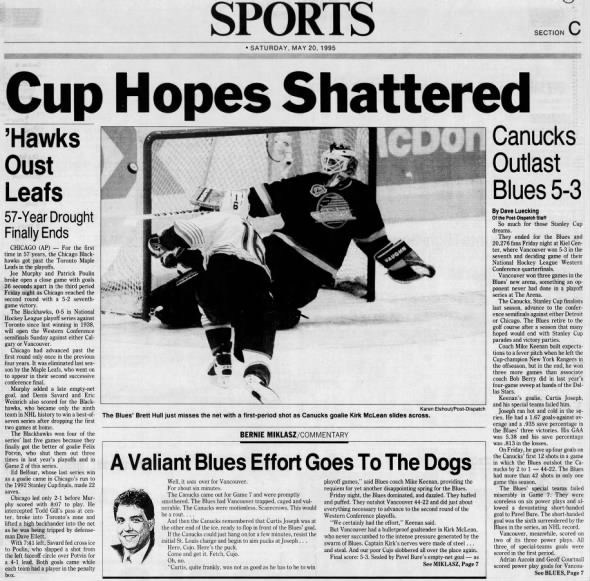 1996
Conference semifinals
at Detroit
Lost 1-0 (2 OT)
The Great One coughed up the puck, and Steve Yzerman made the Blues pay. 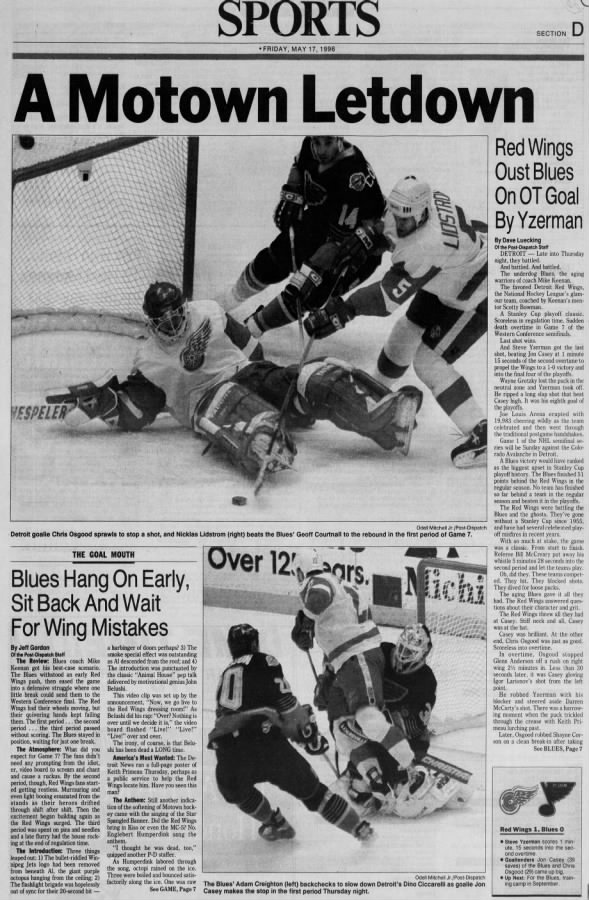 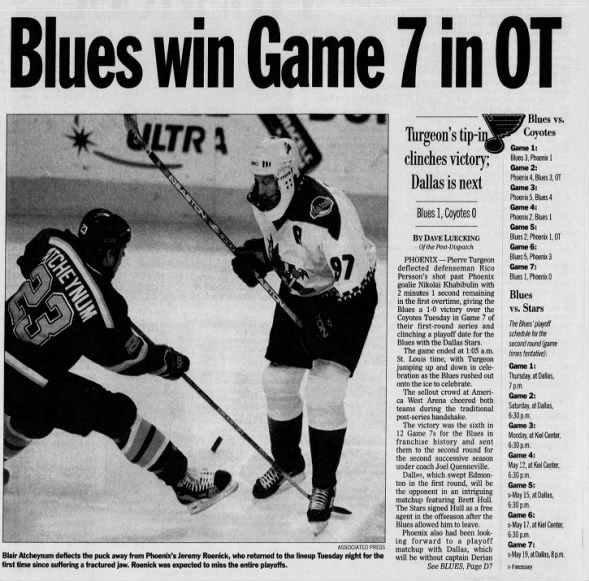 2000
First round vs. San Jose
Lose 3-1
NHL's regular-season champs lose to No. 8 seed in what a Post-Dispatch columnist calls the "most embarrassing of all the Blues' playoff flops." 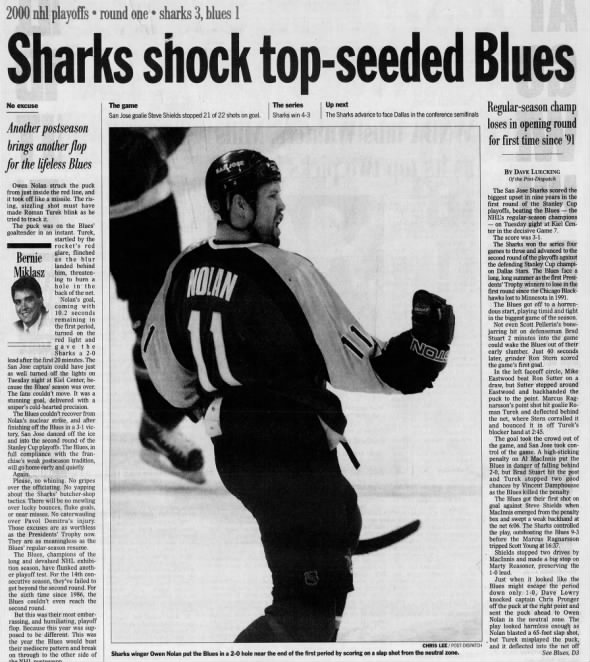 2003
First round at Vancouver
Lose 4-1
Al MacInnis returns early from a separated shoulder after Blues blow a 3-1 series lead, but his giveaway leads to Canucks' game-tying goal and The Note's demise.

2016
First round vs. Chicago
Win 3-2
The Blues exorcise the demons of recent first-round disappointments when Troy Brouwer scores the winner midway through the third period. 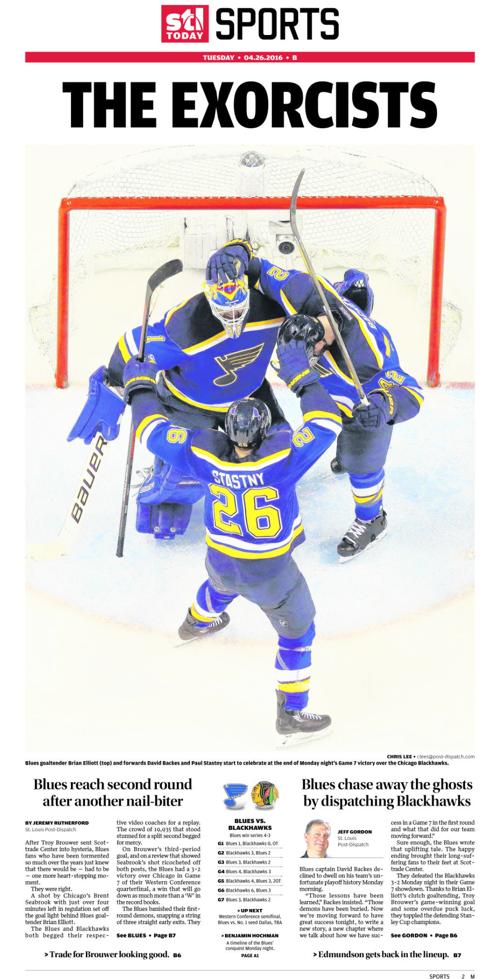 2016
Second round at Dallas
Win 6-1
The Blues take away any of the drama with a 3-goal onslaught in the first period.

Binnington out for series; Blues call up Lindgren

Perron, Blues even things up with 4-1 win over Avs

Perron scores twice, giving him a team-best seven goals in the postseason.

Blues fall in overtime, 3-2 in Game 1 against Avalanche

Late goal by Kyrou sends it into overtime before OT goal by Manson wins it for Colorado.

Avalanche's Kadri on Binnington collision: I was pushed

Avalanche forward Nazem Kadri knocked Faulk out of last season's playoffs and knocked Binnington out of Game 3, but he and his coach thought the play Saturday was just an accident; Girard out for playoffs with broken sternum

Blues notebook: Avalanche have a loss of their own to deal with

The plan was to stay focused and worry about winning – not retribution on Nazem Kadri. But it was Kadri who got the last laugh, in triplicate.

Blues Game Day: Blues expecting all the Avs have to offer in pivotal Game 3 tonight

With the series tied 1-1, the Blues will try to keep their wits about them as they return home for Game 3.

After impressive Game 2 win, can Blues do it again?

Defense and goaltending have kept Blues in the Colorado series so far, and were keys in Thursday's 4-1 victory.

Blues Game Day: Plenty of distractions to try to put aside for Game 4

Blues have lost Binnington in goal, Colorado has lost defenseman Girard while Kadri has received threats after hurting Binnington.

Ten Hochman: Turning point for Blues' season — a look at Colorado’s 5-on-3 in Game 4 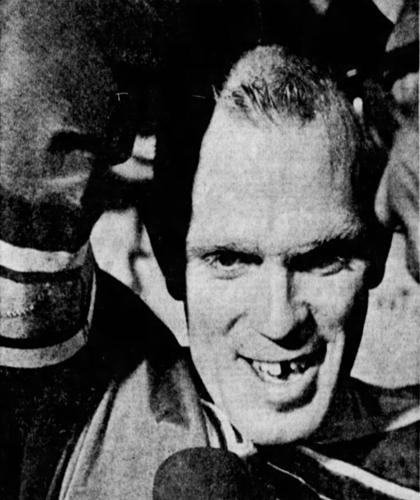 Ron Shock wipes the champagne out of his hair after his goal lifted the Blues to their first Stanley Cup in 1968. Gene Pospeshil/Post-Dispatch

Scotty Bowman and Al Arbour are at the center of a happy gang of Blues celebrating their win in Game 7. UPI photo.