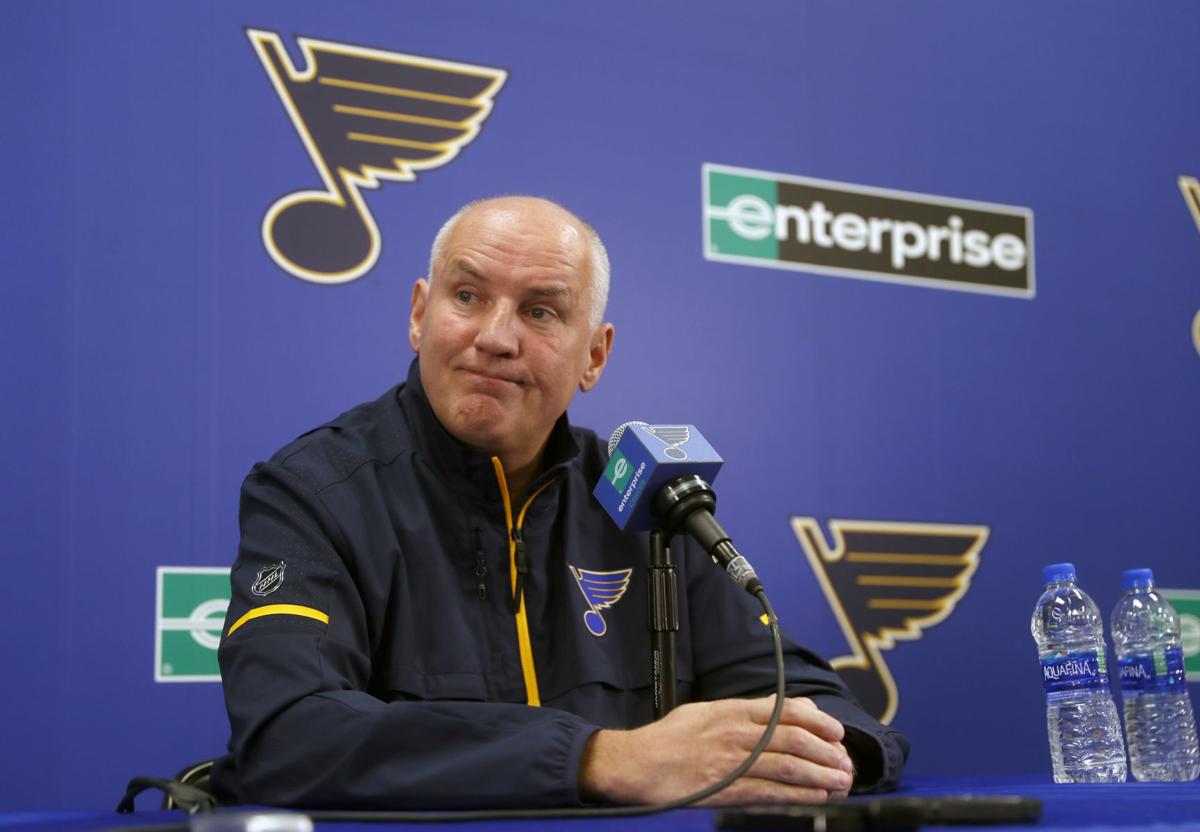 General manager Doug Armstrong picked up three forwards, three defenseman and a goalie in the two days of the draft.

General manager Doug Armstrong has been an out-of-the-box thinker for the Blues.

The second day of the NHL draft on Wednesday seemed to drag on forever, starting at 10:30 a.m. in St. Louis and ending at close to 6 p.m. It was the kind of a day that scouts love.

“We don’t look at it as a long day,” said Tony Feltrin, the veteran scout who ran the draft for the Blues after the departure of Bill Armstrong to become general manager in Arizona. “It’s an exciting day when you’re a scout. Everybody’s anxious for getting their player’s name called out. Perhaps a little long on the clock but well worth the wait from a scout’s opinion.”

After the Blues chose left wing Jake Neighbours in the first round on Tuesday night, they added six players on Wednesday in rounds two through seven and finished with a balanced group of three forwards, three defensemen and a goalie. None of those seven players figure to be playing for the Blues any time soon, but that’s what Feltrin and the Blues expected.

“That’s the typical likelihood of the positions where we picked,” Feltrin said. “The player’s not going to walk in and play for the Blues tomorrow. They’re prospects for the future for the Blues.”

“We got a good balance for the Blues, good prospects,” Feltrin said. “I think we got character kids, kids with skill, kids with size, and lots of ability. I think we did better than expected or as good as expected and we’re certainly ecstatic about it.”

Only one of the players, third-round pick and all-name team member Leo Loof, is from outside of North America. Three of the picks are playing college hockey, the other three junior hockey in Canada.

One thing the Blues didn’t do at the draft was open up any salary cap space by trading players on the current roster for draft picks. Free agency starts on Friday and after a couple of trades of actual players by other teams early in the second round, all the trades after that involved swapping picks. The Blues are just as far under the salary cap on Thursday as they were on Monday, and if they are to sign pending unrestricted free agent Alex Pietrangelo they’ll have to find the necessary cap space at some other time.

The Blues started the day sitting idly. They had traded their second-round pick to Montreal at the deadline to acquire defenseman Marco Scandella, and while general manager Doug Armstrong had said they would consider trying to parlay their two third-round picks into a second-round pick, nothing happened. So it wasn’t until the 86th pick, late in the third round, that they got their chance, taking Dylan Peterson, who is playing at Boston University.

Peterson’s path to the third round was not standard. He was born in Northern California, near Sacramento, but at about four months moved with his family to Taiwan. (His father is a civil engineer.) He lived there till he was almost five when the family then moved to Calgary, which was where he started playing hockey. He was, at one point, fluent in Mandarin. “But then we moved back to Calgary,” he said, “my mom stopped putting me in classes and it’s gone. Not a lick anymore.”

From Calgary, the family lived in Colorado for four years and then he went to Ottawa to play hockey. Even though he has spent more of his time in someplace other than the United States, he sees himself as an American and in 2018, he returned to America to enter USA Hockey’s national team development program in Plymouth, Michigan. Eighteen players with connections to the program were taken in the draft, of which Peterson was the ninth.

“The program is the best time of my life,” he said. “It was the best thing for me. It brought me from a youth hockey player going in to somebody who has a shot at playing professional hockey one day and I owe a lot to the coaches there.”

Peterson is 6-foot-4 and 192 pounds and has embraced a physical style of play. “I love Joe Thornton, he’s one of my favorite players growing up,” Peterson said, “but I’d say someone closer to how I play is someone like Blake Wheeler (of Winnipeg), a big strong power forward.”

The Blues had another pick two spots later and took Loof,

“I think I am a two-way defenseman, play the puck very well, play physical,” Loof said. “Make some good plays in the offensive zone as well. … I’m going to train hard every day and try to play in the NHL. I don’t know exactly when but I’m going to compete every day and train as hard as I can, so I hope someday I play for St. Louis.”

His twin brother, Linus, was also draft eligible and the two were watching together in Karlstad, Sweden, but Linus wasn’t chosen. Asked which one of them was better, Leo chose himself.

The Blues chose Tanner Dickinson, a speedy center from Ohio who is playing junior hockey in Sault Ste. Marie, Ontario, in the fourth round. Dickinson used the stoppage in play starting in March to bulk up, eating five meals and two protein drinks per day to add 24 pounds. In the fifth round, they took a defenseman, Matthew Kessel, who is no relation to Phil Kessel but everyone always asks him. They closed out the draft with goalie Will Cranley and defenseman Noah Beck.

Two players with St. Louis connections were selected Wednesday. Center Chase Bradley, who went to Oakville High for two years before leaving to play junior hockey, was taken in the seventh round with the 203rd pick, coincidentally, a pick acquired from the Blues earlier on Wednesday. (The Blues got Detroit’s seventh-round pick next season in exchange.) Bradley will play with Sioux City of the USHL this season and then go to college at Northeastern. Jakub Dobes, a goalie from the Czech Republic who came to St. Louis and played two seasons with the AAA Blues and eight games with De Smet High, was chosen in the fifth round by Montreal with pick No. 136.

Gordon on the NHL: Predators shake up roster after playoff flop

The Predators are undergoing a significant overhaul on the fly after their disappointing 2019-20 season.

Blues choose left wing Neighbours in first round of draft

He's a physical forward from Alberta who the team sees as already playing a Blues style of game.

Staying under cap hard for teams as they try to dump salaries and prepare for a flat salary cap.

The draft goes virtual and the Blues have the 26th pick in the first round on Tuesday; start of free agency looms on Friday

Gordon on the NHL: (Bill) Armstrong is busiest GM during draft week

Bill Armstrong has hit the ground running as the new Arizona Coyotes general manager. The former Blues executive has his work cut out for him.

Gordon on the NHL: Draft week could trigger trading frenzy

NHL general managers could start moving major assets this week during the draft and ahead of the opening of free agency.

No. 86 Dylan Peterson, center, Boston University, 6-4, 192: Peterson had 12 goals and 24 assists in 64 games split between the U.S. under-17 team and the development programs junior team last season, and had two goals and two assists in five games at the World Under-17 Hockey Challenge in 2018. Has a lot of size and isn’t afraid to use it, especially in front of the net.

No. 88 Leo Loof, defenseman, Farjestads BK Juniors, Sweden, 6-1, 176: He had 93 penalty minutes in 43 games last season and considers himself a two-way defenseman, though he didn’t have many points. According to EliteProspects.com: “He was among the best players for Farjestad when they reached the (under-18) finals in 2019 and was selected as the league’s best defenseman. Loof is a technically refined stickhandler with poise and a sound mechanical base.”

No. 119 Tanner Dickinson, center, Sault Ste. Marie (OHL), 5-11, 150: Had nine goals and 31 assists last season for the Soo in 69 games. Speed is the strength of his game, and he said added some size without affecting his speed. According to EliteProspects.com: “Dickinson’s speed is his key asset and he can be useful with and without the puck. Didn’t play a ton, but when he did, he used his speed with extreme effectiveness.”

No. 150 Matthew Kessel, defensemen, University of Massachusetts, 6-2, 205: His seven goals last season were the most by a freshman defenseman in the NCAA. Has two older brothers who have played college hockey and another that played college football at Cincinnati. Played two seasons in the USHL before going to UMass.

No. 194 Noah Beck, defenseman, Clarkson University, 6-3, 184: Fits the classic Blues defenseman profile of someone tall with a long reach. Had four goals and 23 assists in 42 games with Fargo of the USHL last season before going to Clarkson. His father was a tennis coach, but Beck and his brothers all chose hockey. Hails from Richmond Hill, Ontario, hometown of goalie Jordan Binnington.

Blues come on strong to beat Avs in opener

Sundqvist has two goals and Binnington is stellar in goal for 4-1 win.

The Blues also lost defenseman Robert Bortuzzo, who was on the receiving end of a brutal hit to the back of his head from Colorado’s Valeri Nichuskin.

Fewer than 300 fans — consisting of invited healthcare workers, and friends and family of Blues players and team employees — will be in 18,000-seat Enterprise.

He scores twice as Blues ready to set roster for the season.

Last year as a member of the Los Angeles Kings, he scuffled with new linemates Barbashev and Sundqvist.

General manager Doug Armstrong picked up three forwards, three defenseman and a goalie in the two days of the draft.

General manager Doug Armstrong has been an out-of-the-box thinker for the Blues.