After expecting trade, Shattenkirk commits to leadership role for Blues
0 comments
Share this
{{featured_button_text}}
1 of 2

San Jose Sharks center Logan Couture (left) absorbs a hit from St. Louis Blues defenseman Kevin Shattenkirk in the second period during Game 3 of the Western Conference Finals between the St. Louis Blues and the San Jose Sharks on Thursday, May 19, 2016, at the SAP Center in San Jose. Photo by Chris Lee, clee@post-dispatch.com 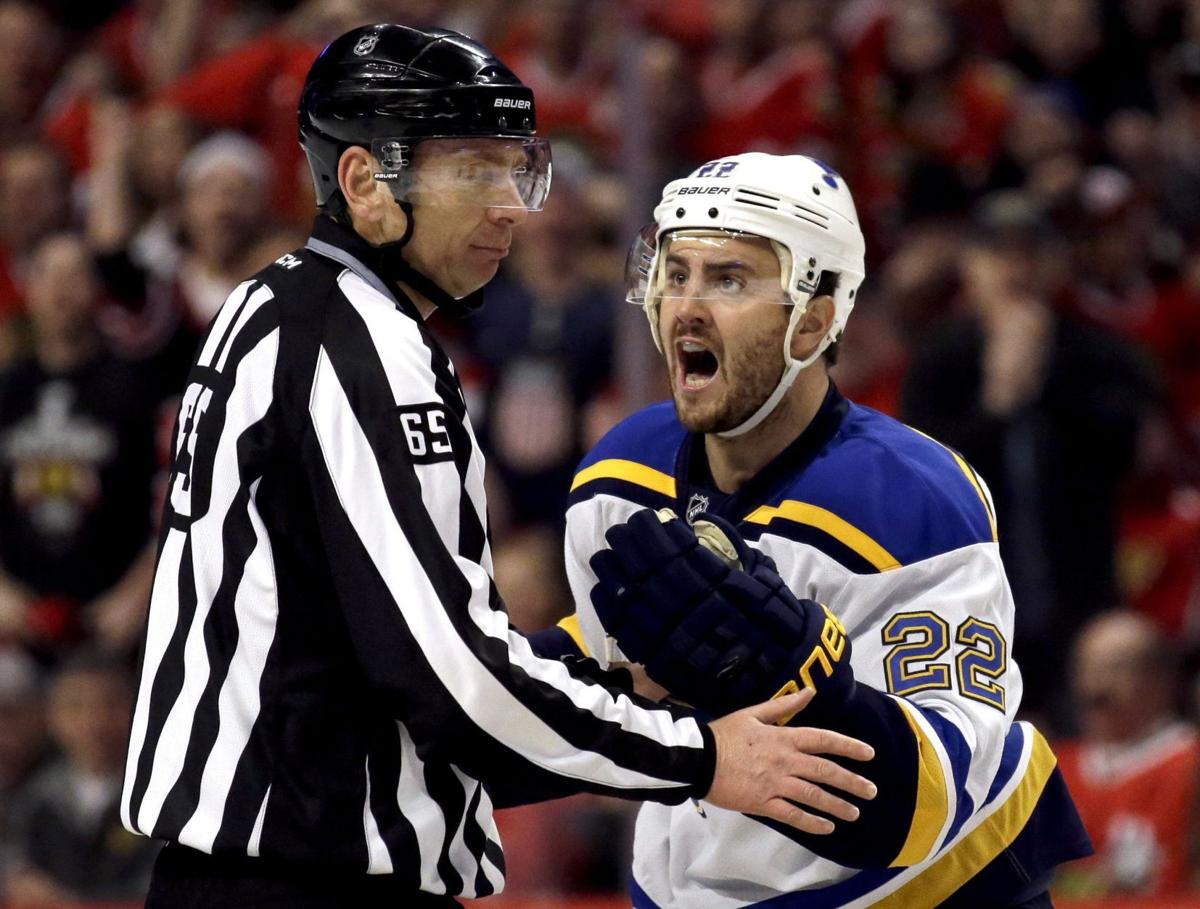 In a matter of months, Kevin Shattenkirk will go from the verge of being traded by the Blues to opening training camp with the club Friday with an “A” on his chest.

General manager Doug Armstrong had talks with teams about Shattenkirk leading up to the NHL draft in June, but when that dialogue didn’t produce a deal, the Blues re-engaged the defenseman about becoming a leader in 2016-17.

If it sounds like a tough sell, it was, but after a phone call from Blues coach Ken Hitchcock, Shattenkirk says he’s ready to put the focus back on what he can do to help the franchise in the final year of his contract.

“We all assumed there was going to be a lot of noise and there was no (shortage) on that front,” Shattenkirk said. “But both sides understand the situation and what’s going on. Army has to look at it from a business point of view and I have to be smart and realize that it is a business.”

Here’s the situation: Shattenkirk is wrapping up a four-year contract that has a salary-cap hit of $4.25 million. As one of the NHL’s top point-producing defensemen, he could command $6 million-plus as an unrestricted free agent next summer, and re-signing him may not make sense for the Blues, who also have Alex Pietrangelo and Colton Parayko locked in on the right side.

That’s why a trade involving Shattenkirk this offseason made sense. He watched the draft thinking that Commissioner Gary Bettman might announce his future on one of his trips to the podium.

“You’re waiting for Bettman to see if he’s going to say, ‘We have a trade to announce,’” Shattenkirk said. “It just seemed like a moment where whatever Army was looking for, he could have found at the draft — maybe younger players, and prospects and picks. But it came and went and then you kind of realized that you psyched yourself out for nothing.”

There might have been a deal had Shattenkirk agreed to a contract extension with one of the Blues’ trade partners. He doesn’t have a no-trade clause, but in effect he does because teams looking to acquire him want a long-term commitment and he has the power to decline that with particular clubs.

It’s believed that Shattenkirk’s unwillingness to sign an extension in Edmonton nixed a potential trade between the Blues and Oilers, yielding speedy forward Taylor Hall. The Blues could have dealt Shattenkirk there anyway, but with no extension in place, the Oilers asked for an additional roster player and Armstrong balked. Hall eventually went to New Jersey for defenseman Adam Larsson.

“Most players only get one kick at the can with this situation, going to free agency,” Shattenkirk said. “I don’t want to say ‘Make the deal’ to make the deal. I want to make sure it’s somewhere I want to be. It’s just a matter of control and when you have that little bit of control, you want to use that as best as possible. If I’m not going to be (in St. Louis), I want to be somewhere that I enjoy for the next however many years of my life.”

The NHL free agency period came next, and the speculation “started up again,” Shattenkirk said.

After the Blues lost forwards David Backes and Troy Brouwer, the belief was that the club might set its sights on an established forward to replace them, but again no deal materialized.

The Blues grew concerned about Shattenkirk’s state of mind because of the constant rumors, so Hitchcock phoned him.

“I was kind of in limbo, and I get a call from ‘Hitch,’” Shattenkirk said. “He said, ‘I don’t care where you are a year from now, or two years from now, I care where you are five minutes from now.’ I think that was good for me, to assume that mentality myself and know that I had to come in here and just enjoy it.”

“We talked about, ‘Can he put everything behind him to become a leader?’” Hitchcock said. “Where things go at the end of the year is out of our reach as a coaching staff. But we need to know how locked in you are ... and he said he’s very locked in and wants to have a hell of a year. That’s when we put him in the leadership position.”

In August, when the Blues named Pietrangelo captain, Shattenkirk was chosen as one of four assistants.

“’Petro called and said, ‘I want you to be right there with me,’” Shattenkirk said. “It just seemed like he really wanted me there, and that’s important to me to know that.”

So everybody seems to want Shattenkirk around, but as he made the drive last week from his home in Sag Harbor, N.Y., to St. Louis for his sixth training camp with the Blues, he had no idea how long his time here would last.

“The thought of making that 15-hour drive out here and going somewhere (else) in a couple of days would be pretty frustrating,” Shattenkirk said. “If it is my last year, it would hurt, no doubt, leaving a lot of buddies. But it’s been a hell of a time and I think that’s the mentality that I’ve brought into camp. I don’t want to let anyone down and I don’t want to have anything in the back of my mind that’s going to keep me from playing my best hockey.

“Army has always said throughout the whole thing that he’s not just going to make a deal to make a deal, and he’d be more than happy if I were back here on the team, and I’ve always had that in the back of my mind. Things change at any given moment. It’s one of those things where all summer you’re focused on, ‘Where am I going?’ and then all of the sudden something could change and you could be staying here. If that were to happen, that would be fantastic.”

But until Shattenkirk is traded or re-signed, the speculation probably won’t die down.

“This is something that I think is going to go on all year, it’s always a story that people are going to run with,” Shattenkirk said. “But for me, I can only control what I do on the ice and if I’m giving 100 percent out there, whatever happens, happens. I can control it to a certain point, but if something is going to go down, it’s going to go down.”

Getting forward to return from the KHL would be an enormous plus for the Blues.

Time has almost come for him to rejoin Blues, but hang-ups may persist with his KHL contract.

Tarasenko scores as Russia hangs on to beat North America

Goalie prefers to remain below the radar, but that won't be happening

San Jose Sharks center Logan Couture (left) absorbs a hit from St. Louis Blues defenseman Kevin Shattenkirk in the second period during Game 3 of the Western Conference Finals between the St. Louis Blues and the San Jose Sharks on Thursday, May 19, 2016, at the SAP Center in San Jose. Photo by Chris Lee, clee@post-dispatch.com