After no-trade assurance from Blues in offseason, Jake Allen is 'ready to rock'
0 comments
Share this
Subscribe today: $3/3 months
1 of 2 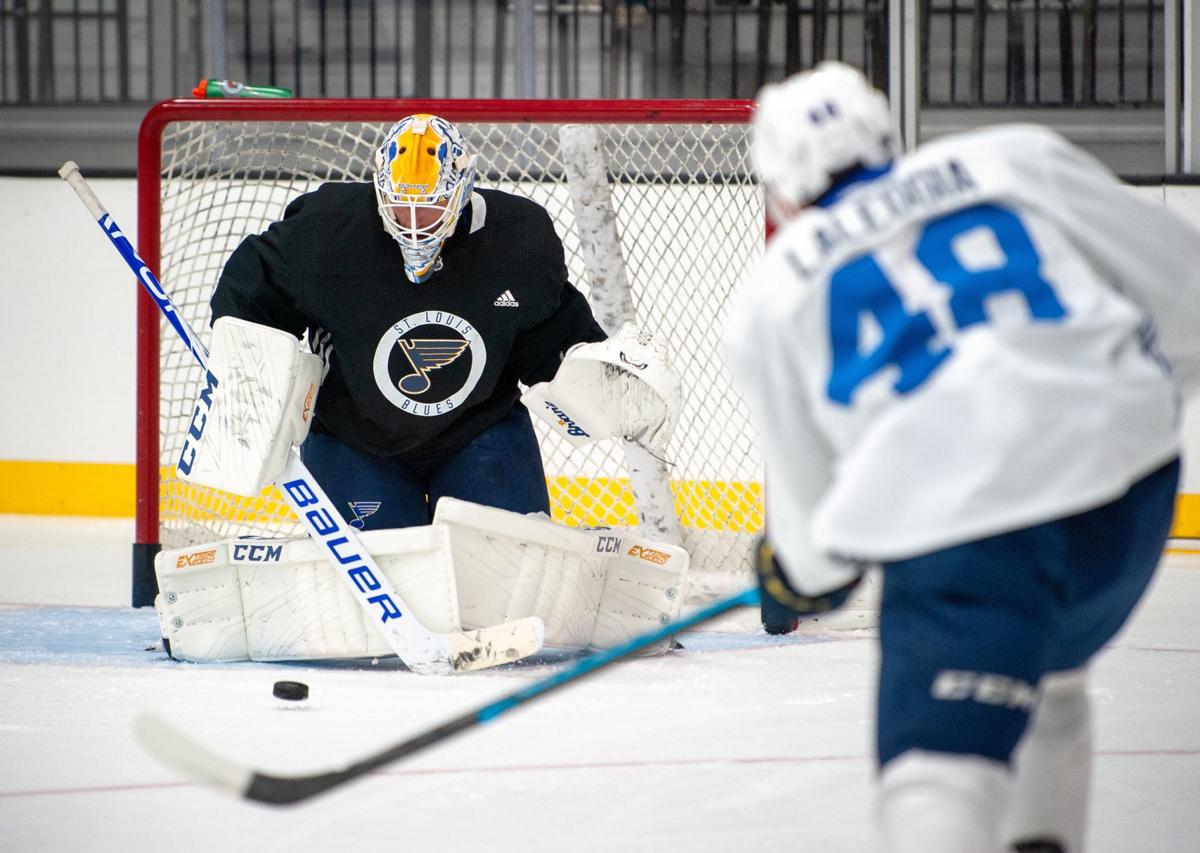 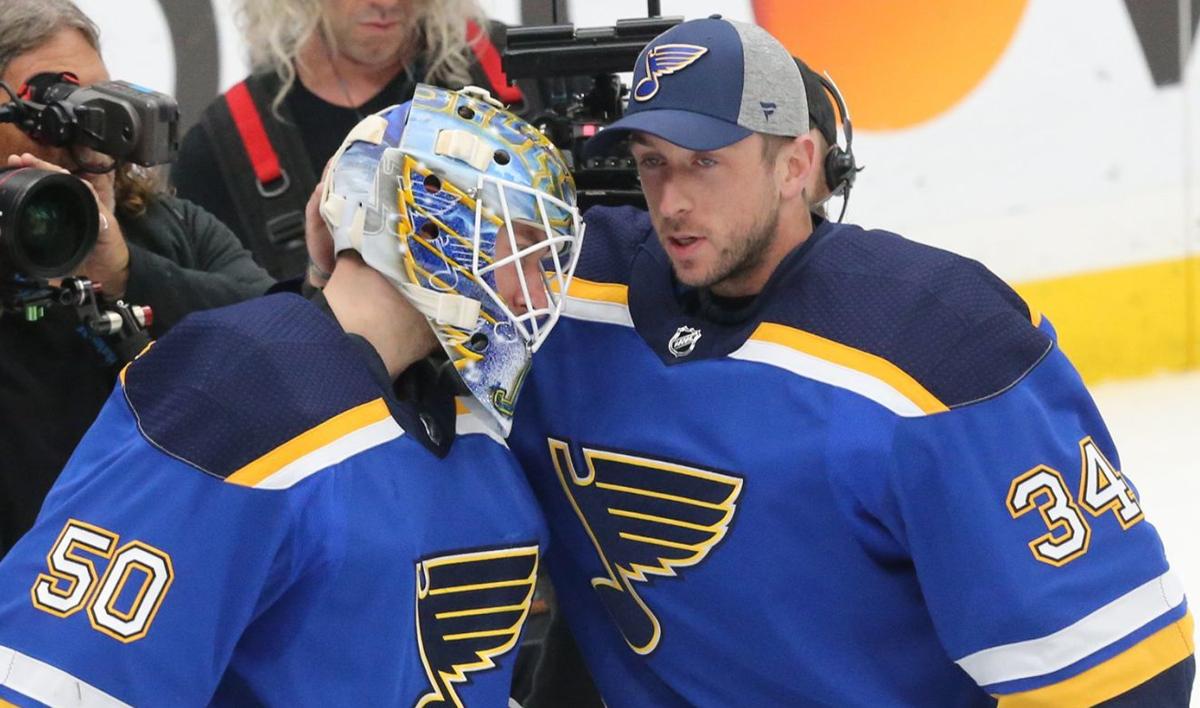 Sure, Jake Allen heard the trade speculation. But he knew otherwise because his info came straight from the source — the Blues.

“I knew internally all along this summer that I wasn’t getting dealt,” Allen said. “They had told me that. You know, people talk and things like that, but I knew that they don’t want to get rid of me, so it was good to be reassured that way.

“I knew that I was coming back. So just put my mind at ease and get really focused on being the best Blue I can. There was a lot of chatter obviously with the way the summer went and the run that Binner went on. But internally I knew I was coming back, so I wasn’t worried about it at all.”

So Allen is back for another season, his seventh at the NHL level with the Blues, who drafted him way back in 2008.

Last year he reported to camp with a back spasm issue that sidelined him for a good chunk of the preseason. This year there are no back problems, but there’s a different challenge: For the first time since the 2014-15 campaign, he’s not the Blues’ No. 1 goalie.

The competitor in Allen is ceding nothing this season.

“There’s one net out there, and I’m gonna go after it,” Allen said. “No question.”

But he also realizes, and appreciates, how well Jordan Binnington played last season, leading the Blues on their Stanley Cup run.

“It’s no surprise that Binner will be starting opening night,” Allen said. “But after that, it’s just do your best when you’re in there. Come to work every day, embrace this whole season.”

Binnington was spectacular in the regular season a year ago, leading the league in goals-against average (1.89) and tying for fourth in save percentage (.927) after bursting onto the scene in January. But he’s not going to play all 82 regular-season games.

Only eight goaltenders played in 60 or more games last season in the NHL, so even if Binnington repeats his success, in theory, Allen should be in line for at least two dozen starts.

“It’s a tough league. Travel. It seems like you play every other night. … The game’s changed over the years. It’s a lot more — I don’t know how to put it — it’s just intense, every shift. It’s fast, and the goalie’s gotta be quick. They’re working all the time in net.

“So I think it’s important that you’ve got two capable goalies that can play a lot of games. When you’re fresh and you’re rested, you’re gonna play better.”

Allen is scheduled to play Friday in Winnipeg, his first action of the preseason. If form holds, he will play the first two periods before giving way to Ville Husso, who’s also in the travel group for the Winnipeg trip. If it seems like forever since Allen has had a start — well, it has.

“It definitely feels like a decade since I played, especially with not playing in the playoffs,” Allen said. “But it’ll be fun (Friday).”

With Binnington starting all 26 playoff games, Allen’s last start was April 3 in Chicago. That was the Blues’ 80th game of the 82-game regular season, and it was 5½ months ago. He did relieve a struggling Binnington in Game 3 of the Stanley Cup Final against the Boston Bruins, but in terms of game action Allen’s season ended much earlier than his teammates.

And that affected how Allen approached his offseason training.

“With me not playing, I just felt that I could go back and do it a little bit quicker than most,” Allen said. “My body obviously wasn’t as banged up and bruised as all the other guys on our team.”

Allen has two years left on his contract — this season and next — paying him $4.35 million a season. That’s a lot for a backup, especially after Binnington signed a two-year deal as a restricted free agent in mid-July, paying him $4.4 million a year.

For this season, the Blues can afford it. Having both goalies around buys time to make sure Binnington is the real deal, and to get Husso back on his feet after an injury-plagued year in San Antonio last season.

Allen enters the season just 16 wins shy of breaking Mike Liut’s franchise record for career victories (151). Will he get enough work this season to catch Liut? Time will tell.

For now, Allen has entered camp in a good state of mind, ready to contribute whenever and wherever he can.

“He’s got a good mindset,” Berube said. “He’s a good team guy. He was last year. He realized our situation, what went on. But he supported the team, supported Binner. I think he was a big part of everything to be honest with you, in winning. … So there’s really no reason to trade him.”

Up next: 7 p.m. Friday at Winnipeg

Notebook: MacEachern shakes off puck to the face, C3

His recovery from cardiac episode will now be overseen by doctors at Barnes-Jewish Medical Center and Washington University.

Bouwmeester has device implanted in chest to monitor, control heart

He remains in a hospital in Southern California after the procedure.

Blues coach Craig Berube said the 2-1 defeat was one of the best games the team has played this season, and he wasn’t exaggerating.

Blues will put Scandella's savvy and experience to immediate use

First person Marco Scandella heard from after the trade was Uncle Sergio. That's Sergio Momesso, who once played on the Blues' Hull-and-Oates line.

Blues fire 46 shots on goal to 14 for Arizona but only O'Reilly scores; Binnington posts second shutout in a row.

Defenseman is still in California after collapsing on the bench in Tuesday's game in Anaheim.

For Blues, the struggle to return to normalcy includes defense and goaltending

Since the Blues came out of their Christmas break, they are tied for last in the NHL in defense, allowing 3.53 goals per game.