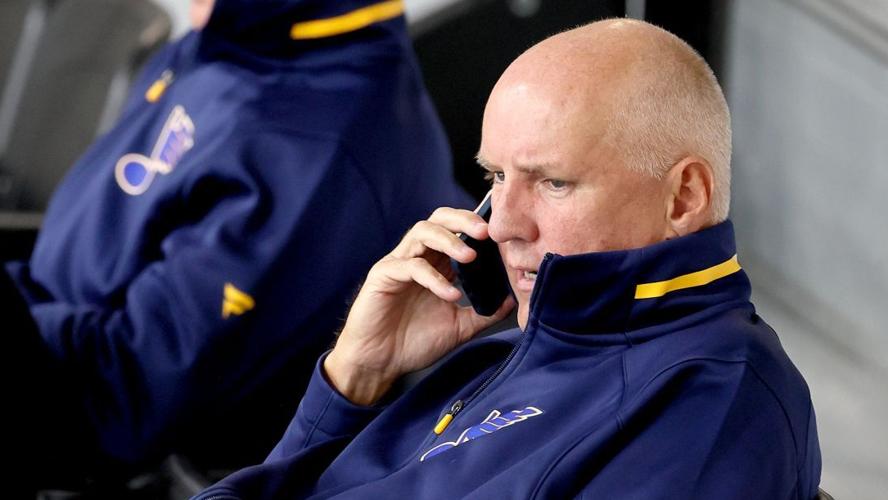 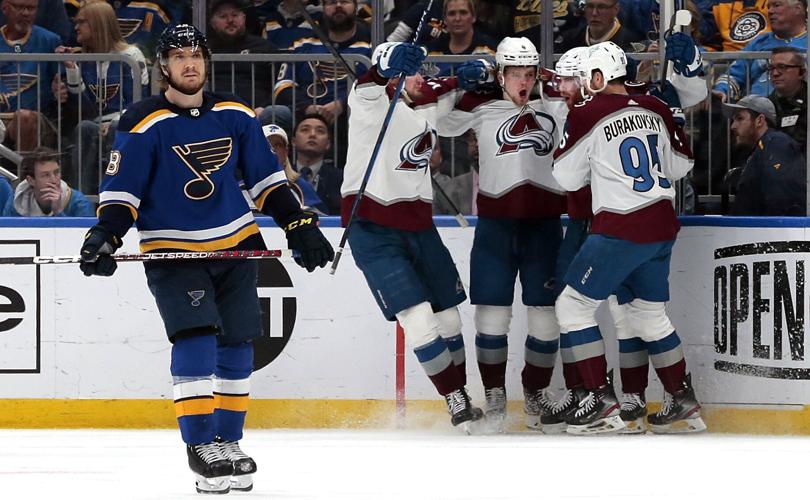 The Blues' Robert Thomas looks to the replay as Avalanche players converge on J.T. Compher, who scored a second Avs goal in the third period during Game 6 of the second round of the 2022 Stanley Cup playoffs at Enterprise Center on Friday, May 27, 2022.

Conventional wisdom — and most Blues fans, it seems — feel the team will be worse without forward David Perron and goalie Ville Husso on the roster.

“That’s why you play the games,” general manager Doug Armstrong said, with a laugh. “We’ll find out.”

The Blues are on the verge of that nine-month “finding out” process. Hockey season is here. Blues training camp opens Thursday with two practices at Centene Community Ice Center. (They take place at 10 a.m. and noon and are free and open to the public.)

The first of eight preseason games is Saturday against the Arizona Coyotes in Wichita, Kansas.

And the regular-season opener comes three weeks from Saturday at Enterprise Center, on Oct. 15 against Johnny Gaudreau and the Columbus Blue Jackets.

“We’re excited,” Armstrong said. “We had a good season last year — 109 points. We win a round in the playoffs, and I thought we were poised to go deeper. And we had some injuries. Things happen.”

Most notably, the Blues lost goalie Jordan Binnington for the rest of the series with a knee injury after Colorado’s Nazem Kadri crashed into him during Game 3 of the second round. They also had four defensemen miss a combined 22 games over two playoff series against the Avalanche and the Minnesota Wild.

The Blues will open the 2022-23 regular season without one of those defensemen — Marco Scandella (hip) — and be without fourth-line forward Alexey Toropchenko (shoulder) due to surgeries. The Blues opted not to re-sign 36-year-old free agent Tyler Bozak, a veteran of the 2018-19 Stanley Cup team.

But otherwise, it’s the same cast of characters, minus Perron and Husso.

“We’re bringing quite a bit of the same group back,” Armstrong told the Post-Dispatch at the NHL Prospect Tournament last week in Traverse City, Michigan. “We saw real good growth from Robert Thomas and Jordan Kyrou last year. Now they need to continue to build off that.”

They both got a $65 million vote of confidence from ownership and management in the form of record-setting eight-year contract extensions.

“We have some other (developing) players,” Armstrong continued. “Scott Perunovich was going to get a great opportunity last season and then got the (wrist) injury. So I think this team is a lot like last year’s team, but obviously missing Perron and missing Husso, that’s an unknown now in a couple areas.”

And who knows? There are other younger players who could step into bigger roles. Such as Jake Neighbours. Or Logan Brown. Or maybe this is the year it clicks for Klim Kostin.

Last year in Traverse City, Armstrong didn’t pull any punches when asked about how the Western Conference shaped up. He basically awarded the Stanley Cup to the Avalanche while standing in the hallway between rinks at Centre Ice Arena.

“Obviously as Stanley Cup champions, somebody has to knock ’em off if they want to become champions,” Armstrong said. “But I think this year’s (Colorado) team is different than last year’s. They don’t have Kadri. Their goaltender’s gone (Darcy Kuemper). They’re starting to feel a little bit of that cap crunch that everybody else is.”

Also leaving was 22-goal scorer Andre Burakovsky, as well as some depth players.

“They still have an unbelievably talented team,” Armstrong said. “So I would say they’re still one of the top teams. Last year, I just thought they were light years ahead of everybody else. And I think this year, they’re still a hell of a team. Just the salary cap has made them a little bit weaker like it has a lot of teams. But they’re still a top team for sure.”

The Blues and the Avalanche aren’t the only contending teams that lost players because of cap issues caused at least in part by the coronavirus pandemic — leading to a flat cap.

Vegas, which missed the playoffs last season but should contend for a postseason berth again, lost Max Pacioretty.

Meanwhile, recent bottom feeders such as Ottawa, Detroit, New Jersey and Buffalo could be on the way back up, in part due to offseason acquisitions. Parity should rule the NHL as much as ever.

“I would say you probably have a self-proclaimed three or four teams that are in a rebuild,” Armstrong said last week in St. Louis after the Kyrou signing. “So that takes you to — what — 28, 29 (teams) that all think they have a chance to win. And we’re in that group.

“But parity’s never been stronger in this league. Until the salary cap takes massive jumps like it did in the past, it’s only going to get tighter and tighter.”

Scoring was as high as it’s been in a quarter-century last season, and the Blues were near the front of that line, finishing third in goals per game — ahead of even Colorado — and with nine 20-goal scorers. Speed and skill have never seemed so important.

But Armstrong sees another reason for the goal spree of a year ago, which may continue this season.

“Scoring was up, but there’s a whole new generation of goaltenders that are in the league, too, that don’t have the Marty Brodeur pedigree,” he said. “There’s a (lot) of great top goalies that have gone out of the league the last five or six years.

“I think everyone’s hoping they find one that can be that dominant guy. But I think if you go around the league, there’s just not that level of eight or nine goalies that everyone knows are stars.”

Gordo on the NHL: Assessing the Central Division as training camps open

It's been quite a journey for Blues goalie prospect Vadim Zherenko

Ryan O'Reilly begins Blues season without Perron, and without a new contract

Team captain wants to stay in St. Louis and says there's no urgency to get a contract done now.

Inside Pitch: These factors could swing wild-card series between Cardinals and Phillies

The Blues' Robert Thomas looks to the replay as Avalanche players converge on J.T. Compher, who scored a second Avs goal in the third period during Game 6 of the second round of the 2022 Stanley Cup playoffs at Enterprise Center on Friday, May 27, 2022.