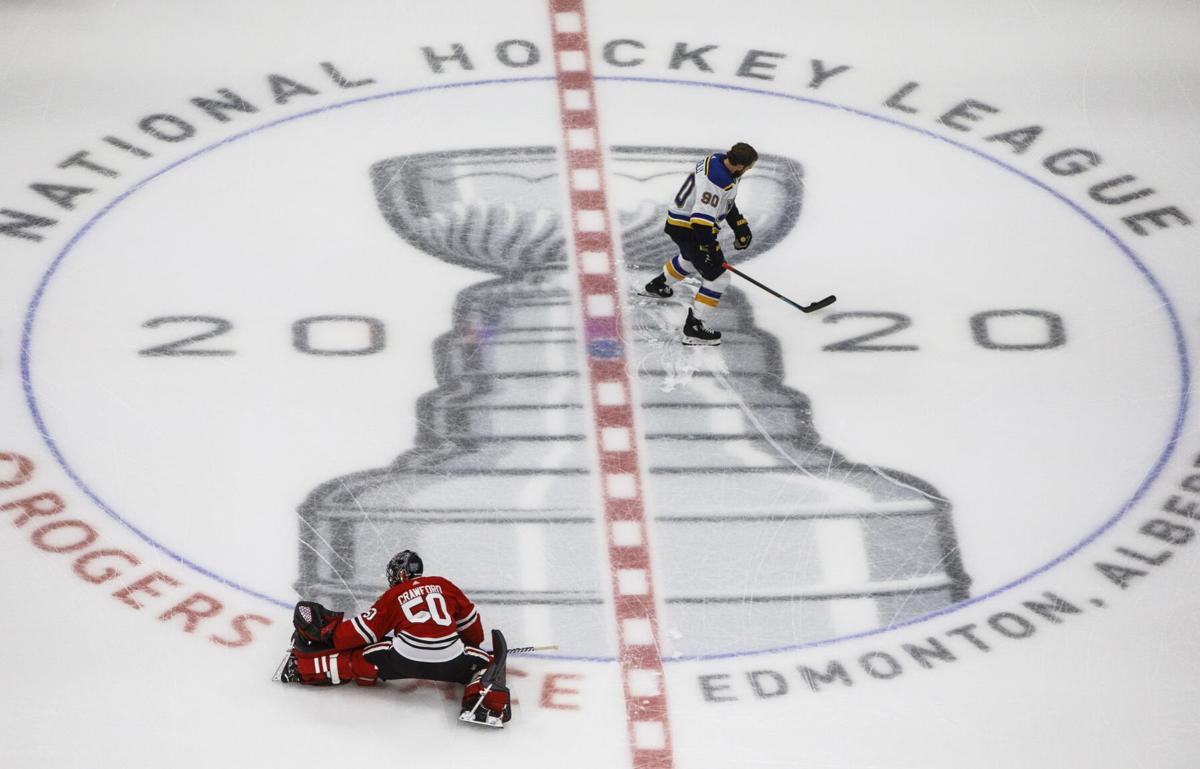 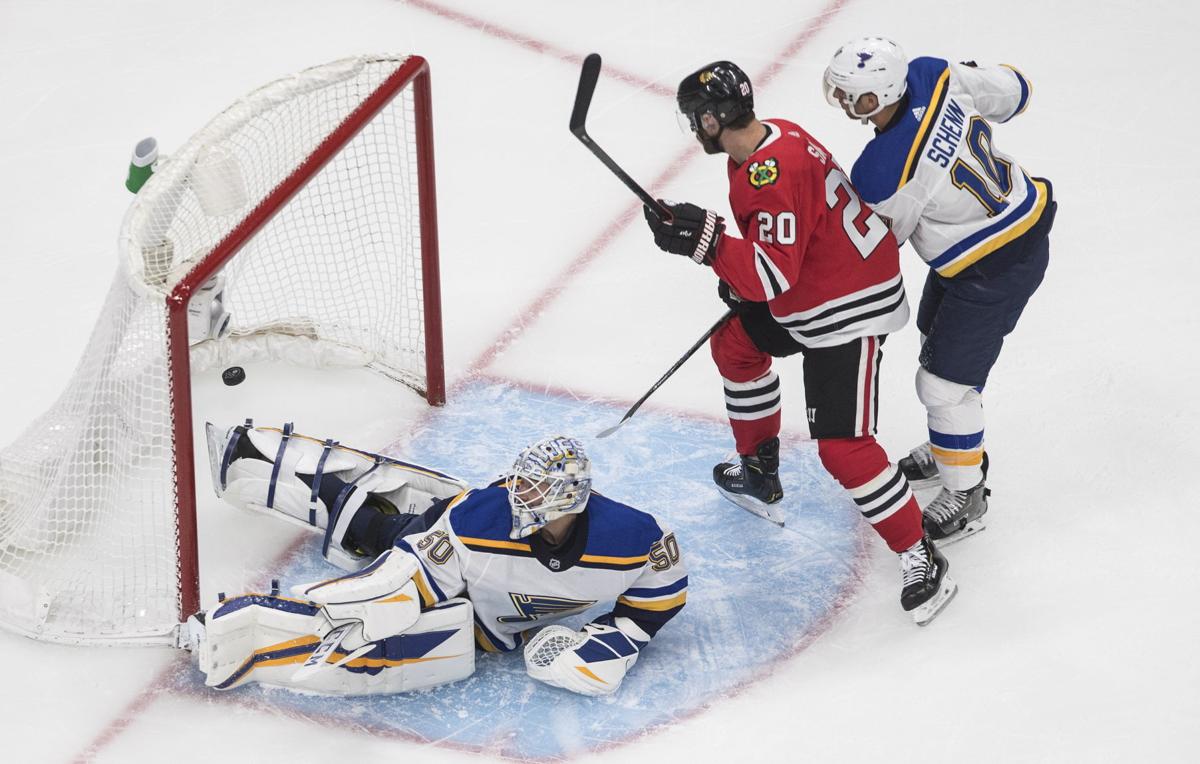 EDMONTON, Alberta — The Blues looked like a team that hadn’t played in 141 days Wednesday evening at Rogers Place. The Chicago Blackhawks did not.

The result was a 4-0 exhibition loss by St. Louis, as the NHL’s return-to-play plan during the coronavirus pandemic became a reality for the defending Stanley Cup champions.

Speaking of reality, the Blues have a lot of work to do on offense, defense and special teams before beginning round-robin play Sunday against the Colorado Avalanche. With that in mind, exhibition game or not, maybe it was a good thing no Blues fans were in the stands to witness things firsthand.

“That’s why you play an exhibition game, right?” captain Alex Pietrangelo said. “You can’t prepare for a game unless you play a game. We play against each other (in practice) but that really doesn’t do a whole lot.

“Obviously we’re not happy with the result. You want to win the game. But it’s something to work off of.”

On offense the Blues had a modest 21 shots on goal, and little in the way of what you’d call high-danger chances. Coach Craig Berube and Ryan O’Reilly both mentioned the condition of the ice, which led to some bouncing pucks.

(It was 83 degrees Wednesday, pretty warm for these parts.)

“You could tell the puck was bouncing quite a bit and we weren’t clean,” O’Reilly said. “When it’s like that you really have to take care of it and not (have) turnovers. We had way too many turnovers.

Berube thought the Blues got too cute at times with puck, and need to get back to their hallmark simple style of direct hockey.

On defense, they gave up a pair of even-strength goals 92 seconds apart in the second period in what had been a scoreless game.

“We let a couple backdoor plays happen, which shouldn’t have happened,” Berube said.

On the first goal, Jonathan Toews came from behind the net and zipped a pass through traffic backdoor to Brandon Saad, who flipped a shot off Jordan Binnington’s blocker and into the net at the 7-minute, 40-second mark.

That goal went from Binnington’s right to his left. The second score went left to right on the Blues goalie, with a similar-looking precise pass from Patrick Kane to Dylan Strome — who got behind Pietrangelo for a tip-in goal that went top shelf.

On the play, Carl Gunnarsson and Mackenzie MacEachern had chances to clear the puck but failed to do so. It was Gunnarsson who was officially credited with the giveaway.

On special teams, the Blues’ power play unit — which finished third in the NHL during the regular season — went 0-for-4.

“PP’s got to shoot a little bit more,” Berube said.

The Blues put only two shots on goal over those four power plays.

Meanwhile, the penalty kill unit gave up a pair of third-period goals both scored with Jake Allen in goal by rookie Dominik Kubalik, a Calder Trophy finalist after scoring 30 goals in 68 regular-season games.

“That’s a good power play over there,” O’Reilly said. “They moved it well. Just some little tweaks (are needed). I think they had a couple good bounces that they were able to score on. I don’t think there’s any panic there, we’re gonna be fine.”

Actually, the Blackhawks finished 28th on the power play but they do put out some talented personnel with the man advantage in the form of Toews, Kane and Kubalik.

“One’s a bad break, the other one we got caught coming in the zone on an entry play and didn’t cover the middle of the ice good enough and they scored,” Berube said.

The latter was a reference to Kubalik’s first goal, which came after Sammy Blais was sent off for interference four minutes into the third. It was a textbook tic-tac-toe play with Kirby Dach sending the puck down low to Kane, who popped it back to Kubalik streaming down the slot.

As indicated Tuesday by Berube, Binnington went two periods, stopping 11 of 13 shots before Allen took over in the third.

“Binner was fine,” Berube said. “He made some nice saves in the first period there. I thought that he played the puck extremely well, got out on pucks and stopped them behind the net early in the game which is important.”

The Blues started with the line of Jaden Schwartz, Brayden Schenn and Vladimir Tarasenko, marking Tarasenko’s first action since Oct. 24 against the Los Angeles Kings when he sustained a left shoulder injury that required surgery.

But they were missing defenseman Vince Dunn, who has practiced only twice since July 14 after apparently testing positive for COVID-19. And a surprise scratch was veteran Alexander Steen, who missed some practice time in St. Louis during Phase 3 (training camp) doing rehab work according to Berube, but had been practicing in Edmonton.

So all in all, in the Blues’ first July game in franchise history, it certainly looked like they were playing summer hockey. It was a night to forget, but considering what lies ahead — real hockey, postseason hockey — it’s easily forgettable.

Even so, with a lot of talk in camp about ramping up for playoffs, it’s clearly time to ramp up. Quickly.

“Obviously nothing’s going to be perfect for us right away,” O’Reilly said. “But there’s lessons to take out of it. It’s a good wakeup for us to go into Sunday.”

The Avalanche won their exhibition game 3-2 over Minnesota in a game that preceded the Blues and Blackhawks at Rogers Place.

Young got his Lix in with the Blues

Walman, 24, is among the team's leading defenseman prospects along with Niko Mikkola and Scott Perunovich.

Ryan Podell, most recently with the Indianapolis Colts of the NFL, replaces Eric Renaghan.

Jersey will be worn at several game during 2020-21 season.