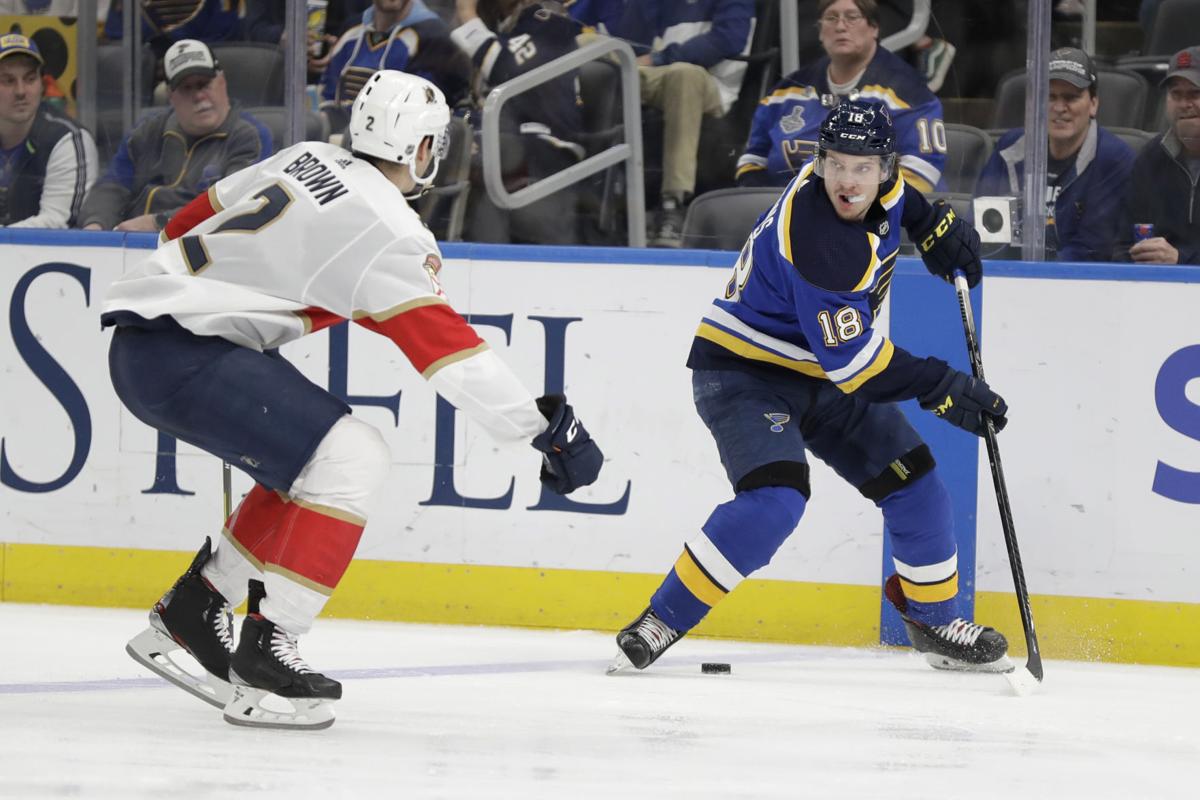 The Blues' Robert Thomas, right, looks to pass as Florida's Josh Brown defends in the second period of a game on Monday, March 9, 2020, in St. Louis. It was the Blues' last home game before the coronavirus pandemic interrupted the season. (Jeff Roberson, Associated Press) 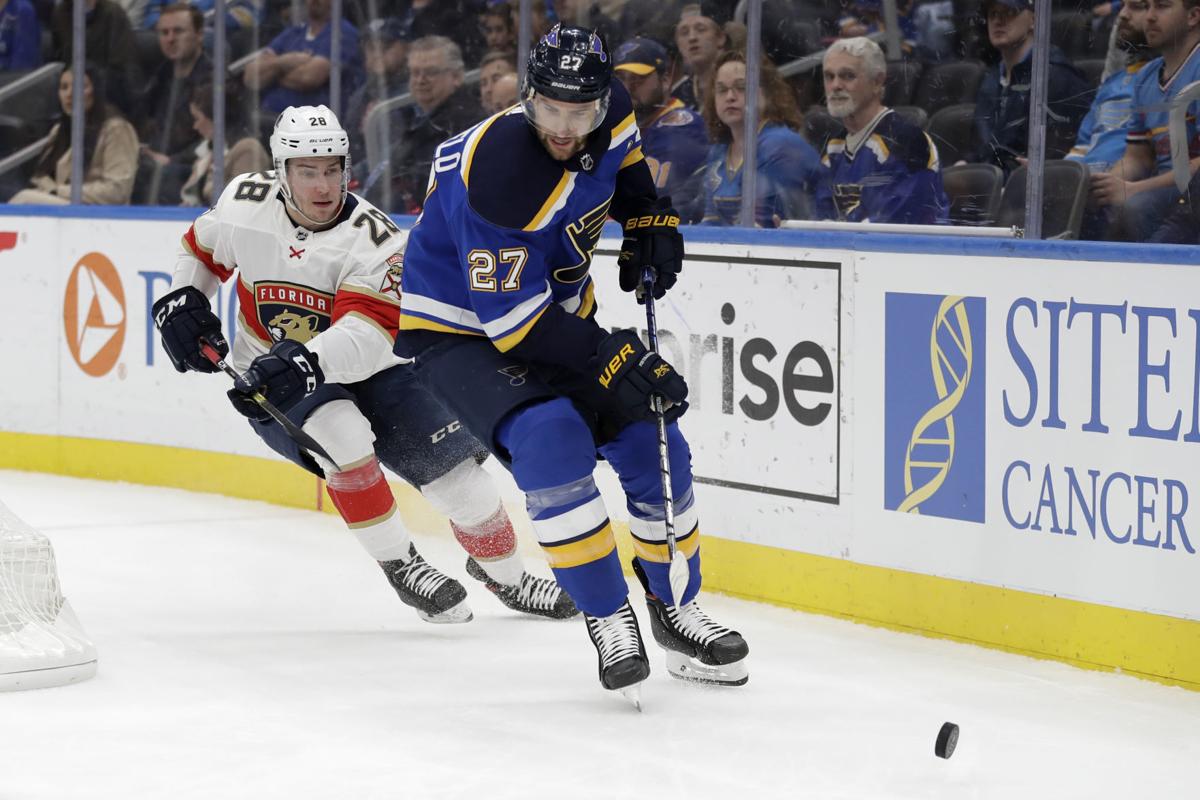 The Blues' Alex Pietrangelo, right, and Florida's Aleksi Saarela chase a loose puck in the first period of a game on Monday, March 9, 2020, in St. Louis. (Jeff Roberson, Associated Press)

As they head down the stretch, the Blues have played a lot of teams on the fringe of the NHL playoffs that have been clawing and scratching to get into Lord Stanley’s tournament. They have proved to be tough outs.

Such was the case with the Florida Panthers, three points out of both a wild-card position in the Eastern Conference and third place in the Atlantic Division entering Monday’s game at Enterprise Center. Normally a high-scoring but defense-deficient team, the Panthers beat the Blues (41-19-10) at their own game, winning a tight-checking, low-scoring 2-1 contest before another sellout crowd of 18,096.

“This time of year nobody’s easy, . . . a lot of these teams are fighting for playoff spots and we’re going to get a lot of teams’ best games right now,” said Colton Parayko, who scored the Blues’ goal.

But the Blues caught a break, and remained in first place in the Central Division and the Western Conference, because Colorado lost to the Los Angeles Kings 3-1 later Monday.

So the Blues remain two points ahead of Colorado, which has a game in hand on St. Louis.

“We knew it when we came into this game that they were gonna be desperate,” teammate Robert Thomas said. “Obviously their division’s really tight and coming right down to the wire. So we need to be more desperate from the start and throughout the game.”

In that vein, Florida (35-26-8) was no different from the Chicago Blackhawks, New York Rangers, New York Islanders, or even the Dallas Stars, from recent Blues games.

Starting with Wednesday’s contest in Anaheim, the Blues play three teams that are out of playoff contention — they face San Jose and Ottawa later this week.

But then it’s back to the playoff grinder with a four-game trip, to Philadelphia, Carolina, Florida and Washington. None will be lying down for the reigning Stanley Cup champions.

“For the most part it’s gonna be tough down the stretch here with teams battling to get in the playoffs, teams trying to (see) where they fit in the playoffs,” Blues coach Craig Berube said. “So again, we’re not gonna get any easy games. This time of the year, you never do.”

Normally, you’d say the Blues — any team, for that matter — were catching a break by avoiding Florida goalie Sergei Bobrovsky, a two-time Vezina Trophy winner who’s been out since Feb. 29 because of a lower-body injury.

But backup Chris Driedger, who was facing the Blues for the first time and appearing in just his 15th NHL game, was more than up to the task. The Blues seem to have trouble against lesser-known goalies, and such was the case Monday.

Putting forth a good Bobrovsky imitation, Driedger stopped 26 of 27 Blues shots in posting just his seventh NHL victory. He was positionally sound, and sturdy when the Blues threatened in close. The Blues respectfully gave him some credit.

But not too much.

“I thought he played great, made some big saves for them,” Thomas said. “That’s about it.”

Berube deftly swatted away the suggestion that without a book on a new, lesser-known goalie, it can be tougher to know how to attack him.

“I don’t think it has anything to do with that,” he said. “I mean he played well but you know, our Grade A opportunities, I don’t think that we executed on them. Like a stick got in there, missed the net, something like that. We waited a little bit too long, (we were) a little too cute at times with the puck. I thought we probably could have directed more pucks to the net than we did.”

It took until the middle of the second period before anybody scored.

Parayko’s 10th goal of the season, at the 11:20 mark, gave the Blues a 1-0 lead. Thomas somehow got a cross-rink pass under the stick of Jonathan Huberdeau to Parayko on the right point. He launched a shot from the outside edge of the circle that got past Driedger for the goal.

It matched Parayko’s career high, achieved last season, and gave the Blues 11 players with at least 10 goals this season. Eight of those 10 Parayko goals have come in his last 17 games. He didn’t specify why that was the case.

But that was it for the Blues, who suffered just the second regulation loss this season for them after scoring first; they are 29-2-8 in such contests.

There were other factors contributing to their loss:

• Only 12 of their 27 shots on goal came from their forwards. Offensive stalwarts Brayden Schenn and Jaden Schwartz, who have combined for 47 goals this season, didn’t have a shot on goal.

• The Panthers blocked 23 shots, clogging the shooting lanes and collapsing down low as the game wore down and they tried to protect their 2-1 lead. Nine of those blocks came in the final 4:48 of play.

• And perhaps feeling the effects of a grueling recent schedule and playing their 10th and final set of back-to-back games, the always physical Blues had only six hits Monday. They had averaged 29.5 hits in their last four games.

• The most different — or strangest — thing of all Monday was the game-winning goal by Florida. After tying the contest on a power-play goal by Mike Hoffman late in the second, former Washington Capital Brett Connolly scored the winner at the 4:23 mark of the third.

The Blues lost coverage on Connolly, who was down low on left wing and had a clean look at goalie Jordan Binnington, who was caught out of position. He was out of position, because he got whacked — hard — by the crossbar when Florida’s Aleksi Saarela slammed the Blues’ Vince Dunn into the back of the net.

The net rocked forward, and only the back of Binnington’s head prevented it from coming off its moorings.

“I haven’t watched (the replay),” Binnington said. “But I took some kind of bar or post to the head. . . . Just tried to get over from what I remember and missed it. So frustrating.”

Binnington clearly was skaken up on the play, and not happy after the game.

“These are games we can win and we’re better than that,” he said. “So we’re not happy about this one. . . . And losing to these teams that I think — (pause) — we can win these games. They’re winnable games. It’s the time of year where you can’t make excuses and you gotta find ways to win and we didn’t do that tonight.”

The Blues' Robert Thomas, right, looks to pass as Florida's Josh Brown defends in the second period of a game on Monday, March 9, 2020, in St. Louis. It was the Blues' last home game before the coronavirus pandemic interrupted the season. (Jeff Roberson, Associated Press)

The Blues' Alex Pietrangelo, right, and Florida's Aleksi Saarela chase a loose puck in the first period of a game on Monday, March 9, 2020, in St. Louis. (Jeff Roberson, Associated Press)