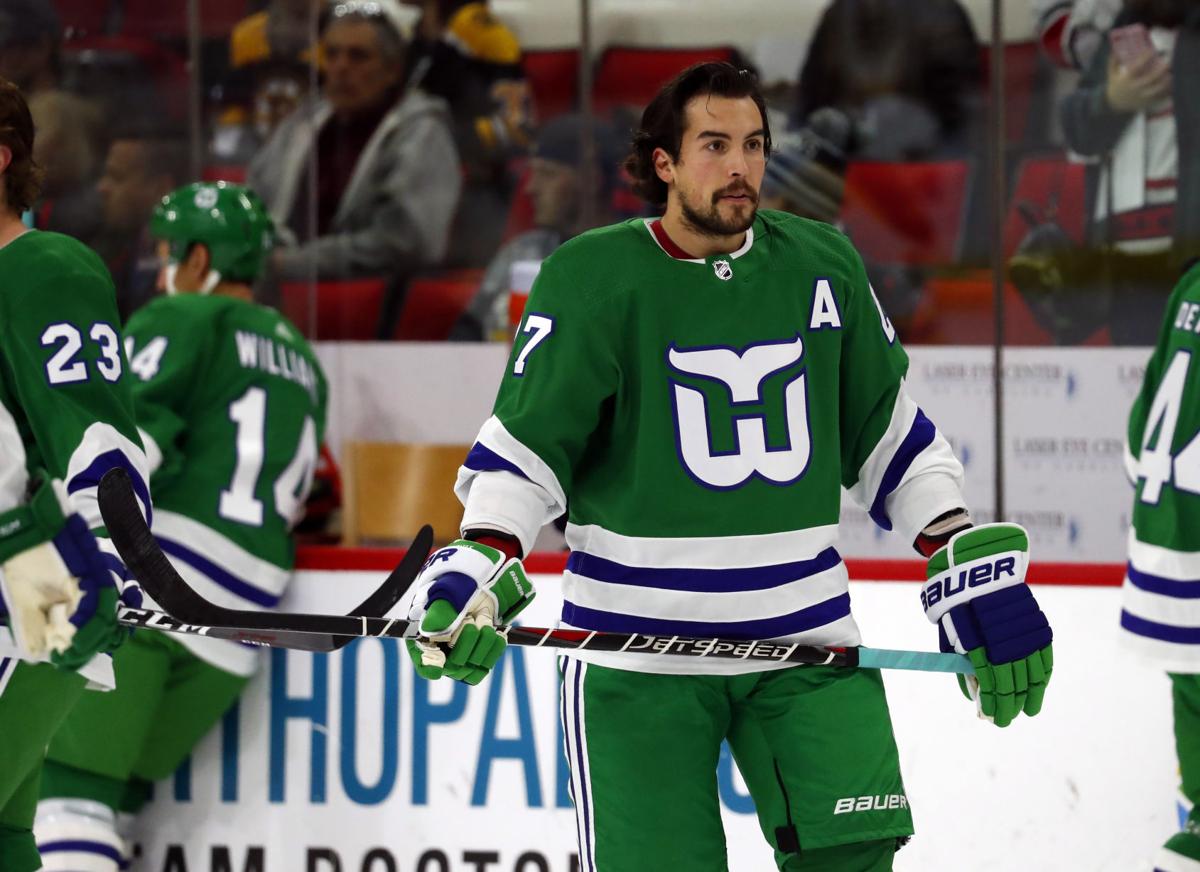 The Carolina Hurricanes' Justin Faulk warms up before a game against Boston last December. The Hurricanes wore uniforms commemorating the Hartford Whalers, who played in the NHL from 1979-97 before moving to Carolina. (AP Photo/Karl B DeBlaker) 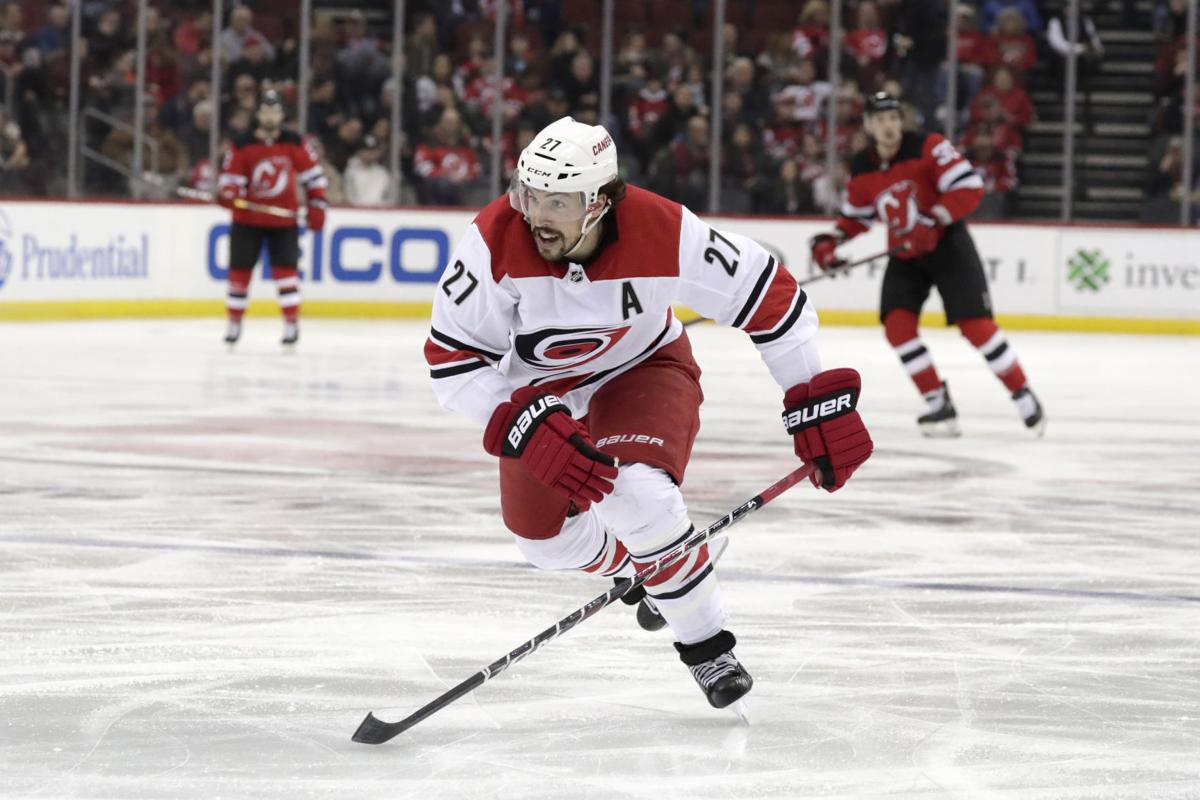 FILE - In this Feb. 10, 2019, file photo, Carolina Hurricanes defenseman Justin Faulk (27) is shown in action against the New Jersey Devils during the second period of an NHL hockey game, in Newark, N.J. The St. Louis Blues have acquired All-Star defenseman Justin Faulk from the Carolina Hurricanes in exchange for defenseman Joel Edmundson and a prospect. The Blues also announced Tuesday, Sept. 24, 2019, that Faulk signed a seven-year contract extension worth $45.5 million with the defending Stanley Cup champions. (AP Photo/Julio Cortez, File)

If there was any doubt about Doug Armstrong’s interest in repeating as Stanley Cup champions, the Blues’ general manager presented Exhibit F on Tuesday. As in Justin Faulk.

The three-time NHL all-star defenseman for the Carolina Hurricanes came to St. Louis in a trade for defenseman Joel Edmundson and forward prospect Dominik Bokk.

Carolina also gets a Blues’ seventh-round pick in 2021; the Blues get a fifth-round pick from the Hurricanes in 2020.

“Our goal is to put our best foot forward and be competitive with the top teams,” Armstrong said. “I believe you get better in the NHL by maybe three or four percent at a time, and no disrespect to anyone, but I think we’re a better team than we were yesterday because of our addition of Faulk.”

The deal came together very quickly according to Armstrong, with talks starting with Carolina less than a week ago.

“We pushed through the weekend on it,” Armstrong said. “We got to a point where we were ready to make the trade and they gave us some time to talk to Faulk and his agents.”

That’s because the trade was contingent on the Blues agreeing to a contract extension with Faulk, who had only one year left on his current Carolina deal. A seven-year, $45.5 million extension came together Monday and on Tuesday morning.

According to Armstrong, Carolina agreed to absorb “a little more than 14 percent” of the $4.83 million that Faulk counts against the salary cap under this last year of his Hurricanes deal.

That saves the Blues $676,000 of salary cap room, according to CapFriendly.com.

“Which will allow us to be cap compliant with, I wouldn’t say a healthy bit of room,” Armstrong said. “But more room than probably people think initially.”

The extension, which takes Faulk through the 2026-27 season, includes a five-year no-trade clause. There’s a limited no-trade provision for the final two years of the deal (with Faulk able to designate 15 teams he doesn’t want to be traded to.)

But it’s a “no-trade” not a “no-move” deal. In theory, that means Faulk could be eligible for the Seattle expansion draft in a couple of years. But such thoughts were far from the Blues’ minds on Tuesday.

“We’re excited to add Justin to our core group for the next eight years,” Armstrong said. “He’s a top four defenseman who averages over 23 minutes a game and we are confident he will be a strong addition to our club.”

Faulk was co-captain (with Jordan Staal) during the 2017-18 season and an alternate captain last season for a Carolina team that reached the Eastern Conference finals.

Nearly half of Faulk’s 85 career regular-season goals have come on the power play — 40 — so he should be of immediate help in that area. He had six power play goals for the Hurricanes last season. Listed at 6-0, 217 pounds, he also gives the Blues another right-handed shot on the blueline.

“Obviously, the power play’s one of my specialties in my time throughout the league,” Faulk said via conference call. “I think I shoot the puck pretty well, and have scored a good amount of goals in my career and throughout time on the power play.

“So if that’s what’s needed, I’m more than happy to try and lend my services and continue on with that. And if I’m put in a different spot, that’s fine, too. Just trying to bring a game that’s gonna be tough to play against all over ice.”

There have been trade rumors swirling around Faulk for a while.

“I’ve been traded a hundred times, according to reports,” Faulk recently told the Carolina media, according to the Raleigh News & Observer.

Now, in fact, he has been traded. But it could be worse. He’s going to the defending Stanley Cup champions.

“I’m happy to be part of a team that’s gonna hopefully continue to have success,” Faulk said. “We all know what happened last season. That’s great. It’s nice to join a team that is probably feeling pretty good and confident and knows what the rigors are like to keep going.”

Armstrong said the signing of Faulk to a substantial contract doesn’t preclude the Blues from signing either Alex Pietrangelo or Brayden Schenn, both of whom are scheduled for unrestricted free agency at the end of this season.

“Ultimately the pie is so big,” Armstrong said. “He’s taken a slice of it now. Our goal was to do this with the understanding that we felt we still had the ability of getting creative and doing other things to sign those guys. And that’s still our mandate.”

Faulk arrived in St. Louis Tuesday night and was at Enterprise Center during the Blues’ preseason game against the Dallas Stars. He got a large ovation from the crowd during a rinkside interview between the second and third periods with Darren Pang.

As for Edmundson, he practiced this morning with the Blues and was scheduled to be in the lineup against Dallas, paired with Vince Dunn. Niko Mikkola replaced him.

“Champs forever! Nothing but love for StL,” Edmundson said on his Instagram account. “Can’t wait to get down to Raleigh and join the ‘Bunch of Jerks!!’”

Armstrong said signability didn’t factor into the trade decision with respect to Edmundson.

“We have a lot of respect for Joel,” Armstrong said. “We would have attacked an extension for him in January, just because of the way the system works. This isn’t any correlation to the (arbitration) business that was held in July and August.”

Negotiations for contract extensions can’t begin for players under one-year contracts until January of that season.

Binnington and Edmundson in Game 7

Edmundson vs. Sharks in Western Final

Blues and Jets in game 4 at Enterprise Center

GM Doug Armstrong says the high-scoring forward is expected back before the start of the playoffs from shoulder surgery.

GM Armstrong says: 'We’re getting Vladi back. We think he should be back within the next few weeks. That’s a huge addition to us.'

Bouwmeester 'feeling pretty normal,' isn't sure about his hockey future

Blues defenseman who collapsed on the bench during a cardiac episode on Feb. 11 won't play again this season or in the playoffs.

After giving up three power-play goals and doing all sorts of things not associated with winning hockey, the Blues come away with a 6-5 victory.

GM Armstrong says: 'We’re getting Vladi back. We think he should be back within the next few weeks. That’s a huge addition to us.'

With Allen in goal and Pietrangelo out sick, Blues score a resounding 5-1 victory to keep surging Dallas at bay in tight Central Division race.

Binnington played one of his best games of the season in 4-1 win. He faced 33 against the Wild — several being high-danger attempts.

Blues fire 46 shots on goal to 14 for Arizona but only O'Reilly scores; Binnington posts second shutout in a row.

Brouwer's back again, and he may have to leave again

He could be sent down when Tarasenko returns to lineup.

The Carolina Hurricanes' Justin Faulk warms up before a game against Boston last December. The Hurricanes wore uniforms commemorating the Hartford Whalers, who played in the NHL from 1979-97 before moving to Carolina. (AP Photo/Karl B DeBlaker)

FILE - In this Feb. 10, 2019, file photo, Carolina Hurricanes defenseman Justin Faulk (27) is shown in action against the New Jersey Devils during the second period of an NHL hockey game, in Newark, N.J. The St. Louis Blues have acquired All-Star defenseman Justin Faulk from the Carolina Hurricanes in exchange for defenseman Joel Edmundson and a prospect. The Blues also announced Tuesday, Sept. 24, 2019, that Faulk signed a seven-year contract extension worth $45.5 million with the defending Stanley Cup champions. (AP Photo/Julio Cortez, File)