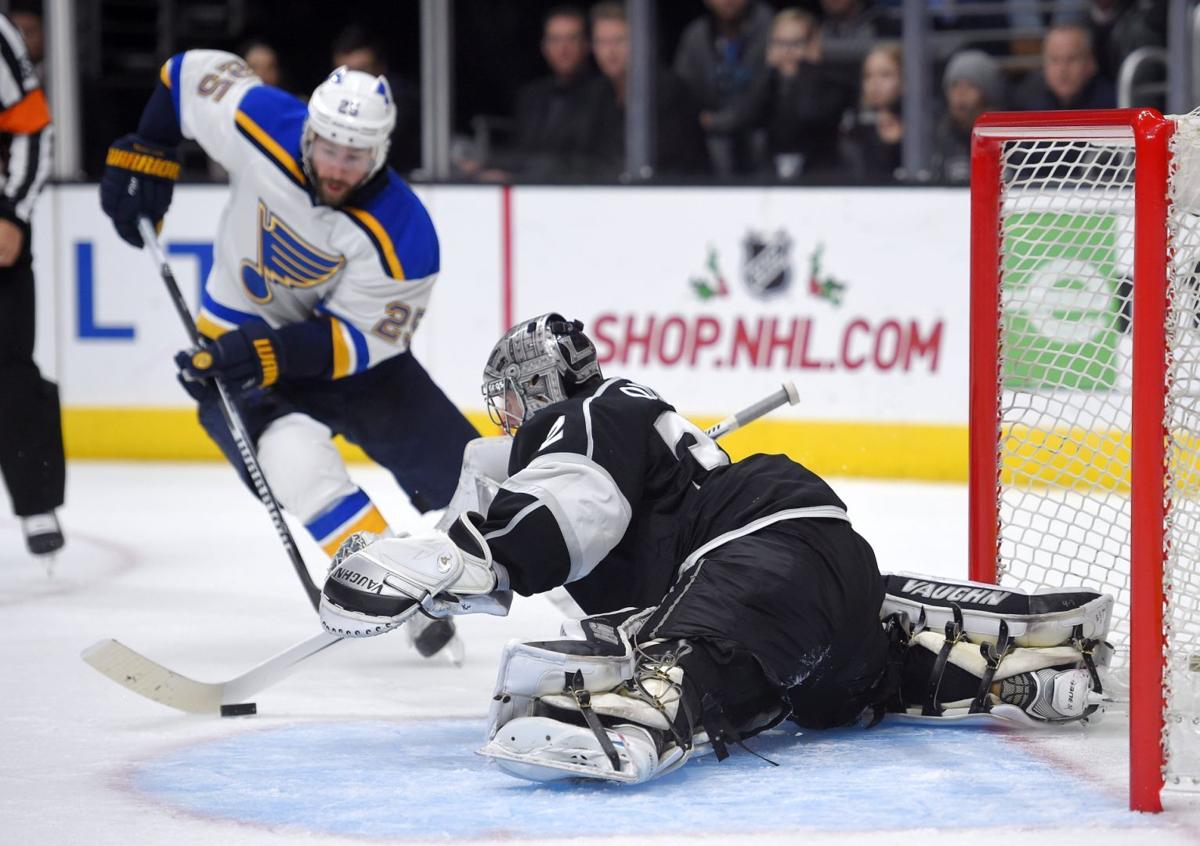 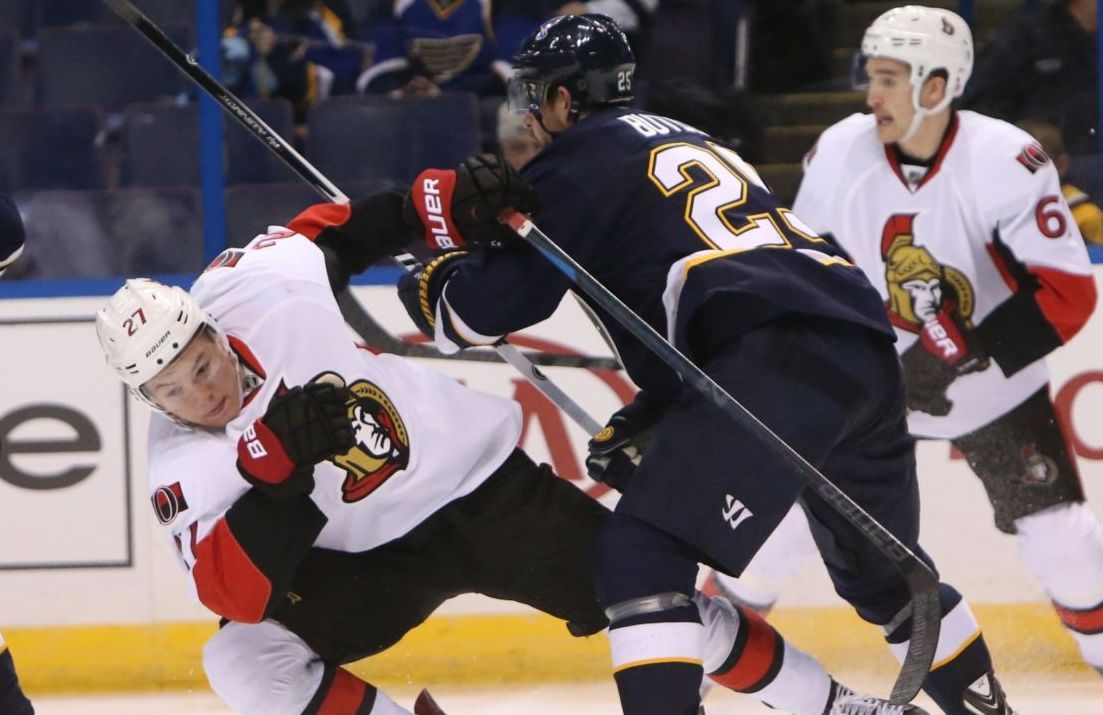 Chris Butler was 10 or 11 when he got one of his favorite Christmas presents ever: A gold, aluminum Easton Brett Hull-model hockey stick. For a kid in St. Louis who loved to play hockey, what could possibly be better than that?

“That was probably the coolest present,” he recalled. “That was such a big deal back then.”

Butler may have been the typical kid, taking that stick and dreaming of one day playing for the hometown team, the team he and his father would go see every year around his birthday, but he went beyond typical: He made his dream come true.

Butler is a product of St. Louis, born and raised here, and now he’s getting the chance to play here after signing with the team as a free agent over the summer and then getting called up from the AHL in November after starting the season in Chicago.

There have been plenty of stops along the way to get back home, places like Sioux City, Iowa; Portland, Maine; and Buffalo and Calgary, but now he’s back, living in a house in Glendale just a few miles from the cul-de-sac in Kirkwood where it all began many years ago, where he played with friends, shooting at goals built out of scrap wood by his father with blankets draped over the back to serve as netting. He goes home after a game or practice to see his wife and his dogs, and on weekends he can see his parents. It’s turned out the future he dreamed of has not only come true, but has been every bit as good as he thought it would be, which may be the best kind of dream.

“It’s tough to describe,” Butler said of playing at home. “It’s been exciting, but it’s been almost calming at the same time. You know when you leave the rink you’re just in a comfortable setting. This is home for me, this is where I grew up. I can go to the same grocery stores, the same restaurants, do all the normal things I would do on any other normal day. It’s just that I come to work in the mornings and I get to play games for the team I grew up watching and kind of fell in love with. That part’s really exciting, and away from the rink, I think being really comfortable has helped in my transition game as well.

“I’m five minutes from my parents’ house. It’s still the same people who live there in the neighborhood I grew up in. It’s just nice to be able to be part of the community as well. I haven’t been here for a winter in God knows how long. To be around for that, go to Tilles Park and see the lights, do the things we did as kids, it’s fun. It makes you grateful.”

“It’s a huge thrill for him,” said Butler’s father, Doug, who played hockey at St. Louis University when the Billikens had a Division I program. “To be in the city where you grew up, the odds of that happening are pretty small.”

Hockey players from St. Louis are a fairly recent development. The NHL has had just 10 players who were born in the St. Louis area, and seven of them were born in 1984 or later. Butler is just the second native St. Louisan, after Cam Janssen, to play for the Blues. In about a month, barring injury or a trip back to the minors, Butler will have played in the third-most NHL games of any St. Louis-born player, behind only Paul Ranheim and Pat LaFontaine, both of whom were born here but moved away when they were young and developed their games elsewhere. Among players who went to high school in St. Louis, a group of 10 that includes Paul Stastny, Ben Bishop and Brandon Bollig (all of whom were born elsewhere), Butler is second in games played, behind only current teammate Stastny, who like Butler played at Chaminade.

While the Stastnys have a strong claim for being the mythical first family of St. Louis hockey — father Peter played for the Blues and is in the Hockey Hall of Fame while having two sons, Yan and Paul, who played at Chaminade and then in the NHL — you can make a case for the Butlers, too. Though Peter Stastny settled in St. Louis after his playing days, he played just 23 games for the Blues. Doug Butler never made it to the NHL — he played two seasons in the American Hockey League before his career ended — but he moved to St. Louis from Souris, Manitoba, to play hockey at SLU and married Martha Gartland, who was an All-American field hockey player at SLU. Leaning forward over sticks is second nature to the Butler family. “Hockey’s kind of in our blood,” Chris said.

Chris still had to choose. He also played baseball growing up and opted for hockey at a point when it wasn’t an obvious choice. After his sophomore year at Chaminade, Butler decided he needed to commit to something year round, and if he was going to play hockey in the fall, he couldn’t spend his summer standing outside in the heat playing baseball. He eventually accepted a scholarship to play at Denver and was drafted by Buffalo in the fourth round in 2005.

“Growing up I was always asking about college hockey, because for a kid in St. Louis, that was the ultimate goal, to get a scholarship and pay for my education so my parents wouldn’t have to do that,” Chris said. “I think in juniors it kind of hit me. Central Scouting came out and said I was going to be drafted. It’s something I never really thought was possible. Then I went to college and progressed. I guess you continue to adapt your goals and your expectations for yourself. Growing up, you didn’t think about playing in the NHL if you were from St. Louis. Now I look at all the kids that are in the national program and kids that are getting drafted year after year after year. It’s fun to see.”

“He always seemed to go to the next level,” said Doug, who was a defenseman who liked to go forward. “He always kind of stretched it. I was encouraged when he said he would go to the USHL. That was a big step. I was apprehensive all the time. Growing up with hockey, playing college myself, playing in the American League, those are huge steps. I saw where I maxed out. He played juniors, and at that time, not many St. Louis kids were going and playing and he went and accomplished that. He kept taking the necessary steps.”

If the move home has been a great one for Chris, it’s been very good for his family, too. Doug, who was an assistant coach at CBC, used to drive around the Midwest, to Chicago, Nashville and Columbus, to see his son play when he was with Calgary or Buffalo. That was a thrill, but in a lot of cases, when the game ended, there was still six hours of driving time to get back home. Now, with Chris playing half his games downtown, there’s a lot less time spent on the interstates, and when the family cheers for him, they’re not doing it in the opponent’s building. “It’s great to go to a game and be home at 10 o’clock,” Doug said.

“It’s just nice to be around,” said Chris, thinking about a recent Sunday afternoon spent with his family after a team function at Scottrade Center. “I wouldn’t say you take them for granted, but they’re little luxuries that you now have at home. They’re pretty fun to have. ... I’m definitely thankful for putting in the work over the years.”

It’s taken a lot of work to get back to where he started, where he always wanted to be.

Home ice is no help for Blues

Stars 4, Blues 3 • After a winless trip and a holiday break, Blues lose their fourth in a row.

Blues Talk: Fans sound off about the Winter Classic

The Blues are back on the ice after a three-day holiday break.

Blues forward has dealt with mother's struggle with alcohol, father's Alzheimer's disease and recent deaths of two loved ones.

Armstrong won't be playing it safe

To win a Stanley Cup, Blues GM Doug Armstrong knows you have to take chances — and be prepared for them not to work.