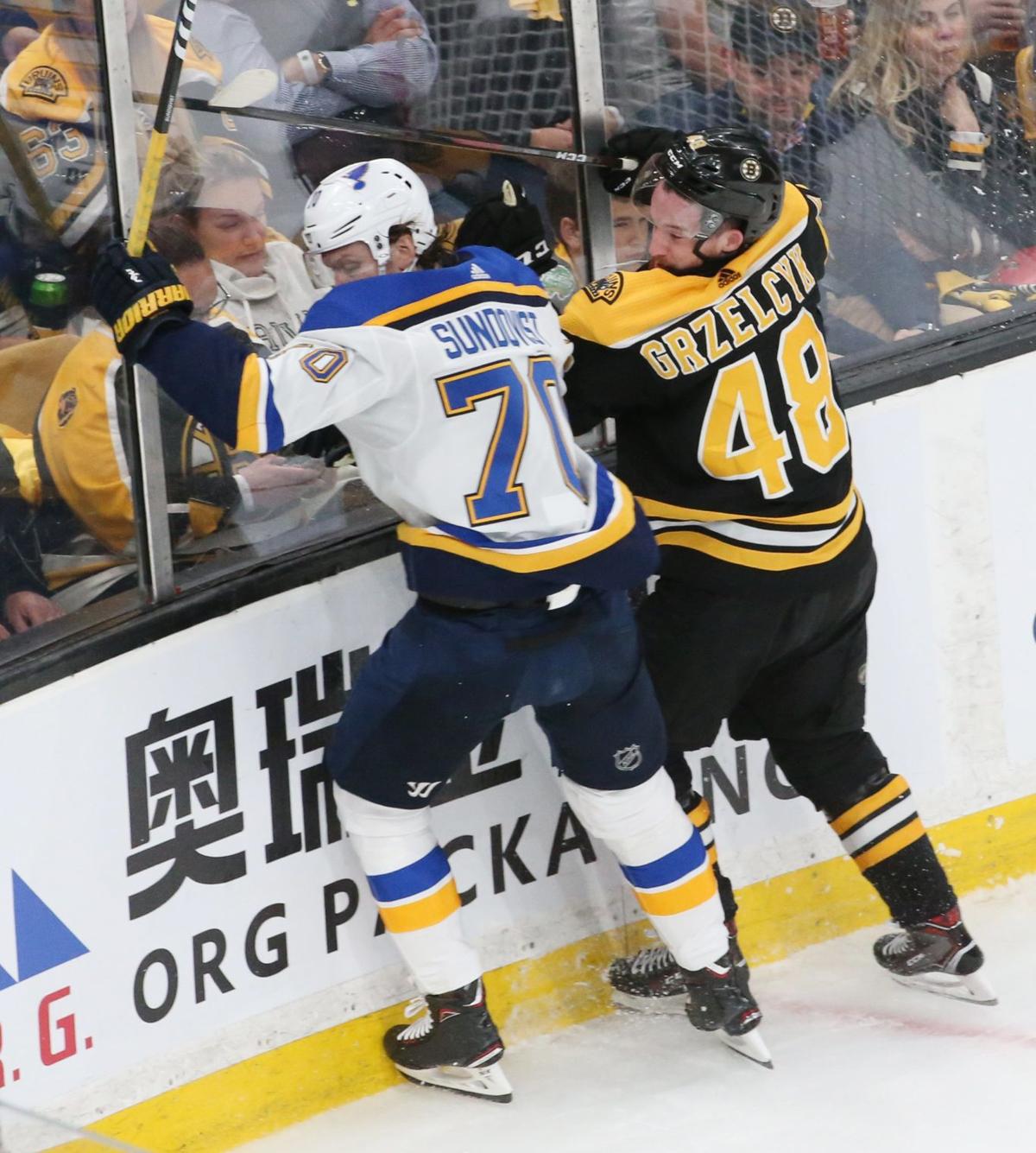 Blues' Oskar Sundqvist and Bruins' Matt Grzelcyk look for the puck immediately after Sundqvist checked Grzelcyk into the boards in Game 2 of the Stanley Cup Final. Grzelcyk then fell to the ice and had to be helped to the dressing room. Because of the hit, Sundqvist has been suspended by the NHL for Game 3, and Grzelcyk is not expected to return. Photo by J.B. Forbes, jforbes@post-dispatch.com 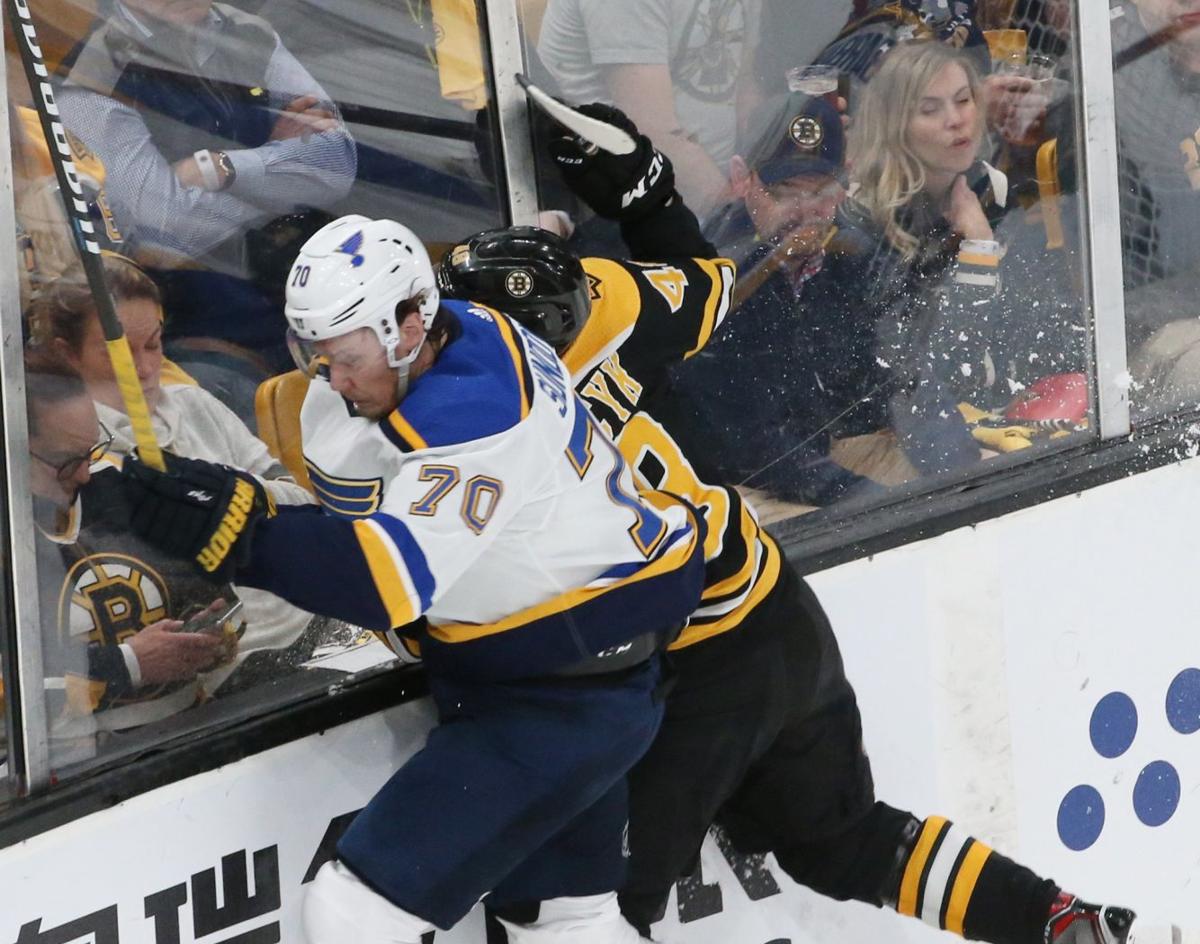 Oskar Sundqvist of the Blues was suspended for one game of the Stanley Cup Final for this Game 2 hit on Boston's Matt Grzelcyk. (Post-Dispatch photo by J.B. Forbes)

Next to goalie Jordan Binnington, there has been no greater out-of-nowhere success story for the Blues this season than forward Oskar Sundqvist.

That success story was put on hold Thursday evening, when the NHL's Player Safety department announced that Sundqvist was suspended for one game as a result of a boarding penalty incurred in Game 2 of the Stanley Cup Final on Wednesday against the Boston Bruins.

Sundqvist will miss Game 3 Saturday at Enterprise Center as the Blues play their first home game in a Cup Final since 1970.

“The league has made their decision, and now we need to prepare for Game 3,” general manager Doug Armstrong told the Post-Dispatch via text message. “Depth has been a strength of this team, and I am confident that whoever Craig (Berube) taps to go in will be more than prepared for the task at hand.”

The next man up appears to be Zach Sanford, who has been a healthy scratch for the last 18 games in this Blues playoff run. Sanford hasn’t played since Game 3 of the Blues’ Round 1 series against Winnipeg on April 14.

Sanford grew up in the Boston area and played hockey at Boston College, so playing in the Stanley Cup against the Bruins obviously would be special.

As Armstrong mentioned, one of the hallmarks of this Blues team is superior roster depth; it has helped get them this far. But playing a game without Sundqvist, and possibly Robert Thomas and Vince Dunn as well, will test that depth.

“Yeah, absolutely,” center Ryan O’Reilly said. “I think we have great personnel here. We have so many guys who can step in and do the job. Obviously, it’s tough losing key players like that. But we’re confident. We’ve got a great group here and (have) so many guys who are able to step in and make an impact.”

Sundqvist, 25, had a breakout regular season with 14 goals and 17 assists in 74 games. He had only two goals and seven assists in 70 previous NHL games with St. Louis and Pittsburgh.

During the playoffs, Sundqvist has four goals, five assists and is tied for the team lead at plus-8. He also is a regular on the penalty kill unit.

“He’s a big part of our team,” team captain Alex Pietrangelo said. “He plays big minutes night in and night out and in every situation.”

But Pietrangelo expressed confidence that the Blues will handle this test.

“Well, it tested us last night and we did just fine,” he said, referring to Wednesday’s 3-2 overtime victory over the Bruins.

Bothered by a wrist injury, Thomas missed his first game of the playoffs, with Robby Fabbri stepping in and playing well in his first action since Game 5 of the Dallas series May 3.

“So we’ve had injuries all year,” Pietrangelo said. “We’ve had guys go down and other guys have stepped up. You want to have depth for this exact reason. (Fabbri) comes in (Wednesday) night and played a fantastic game for us. It’s not easy to jump in at this level and play the way he did.”

The Blues also were without defenseman Dunn (head, mouth), who has missed five playoff games since being struck in the face with a puck early in Game 3 of the Western Conference Final against San Jose.

In a media session nearly eight hours before the NHL decision on Sundqvist, Berube said Dunn was close to returning Saturday against Boston.

“Yeah, there’s a chance,” Berube said. “We’ll see how he does tomorrow.”

But Berube gave a cryptic answer when asked about Thomas’ status.

It was unclear what Berube meant by “the situation,” but with Sundqvist now out of Saturday’s game, perhaps the Blues will consider using Thomas against the Bruins. If that were the case, they would not need Sanford.

Justice moves swiftly in the NHL. On Thursday morning, NHL Player Safety announced that Sundqvist would have a phone hearing with the league. The hearing took place at 3 p.m. Thursday, or just 2 ½ hours after the team charter returned to St. Louis from Boston.

Five hours after the hearing started, the league announced the suspension.

Late in the first period of Wednesday’s game, Sundqvist was assessed a two-minute minor for boarding because of a hit from behind on Boston defenseman Matt Grzelcyk.

Grzelcyk had the puck in the corner behind the Bruins’ net and appeared to lose an edge skating after changing directions. He was falling to the ice when Sundqvist struck him from behind with his shoulder. Grzelcyk’s head slammed against the glass and he fell to the ice.

Grzelcyk had to be helped off the ice and did not return to the game. He spent part of Wednesday night at a hospital undergoing tests and evaluation. He did not accompany the team to St. Louis on Thursday, meaning he’s almost certainly out for at least Games 3 and 4.

“He’s in (concussion) protocol,” Boston coach Bruce Cassidy said. “When we have a further update, we’ll give it to you. Obviously we’re going to list him day-to-day . . . see how it goes from here.”

In a video explanation sent out via the NHL Player Safety account on Twitter, the league explained that “the boarding rule places the onus to deliver a legal check on the hitter.”

While acknowledging that Grzelcyk adjusted his body position in making a play on the puck. Grzelcyk “does not do so in a way that absolves Sundqvist of responsibility for the nature of this hit.”

The league said Sundqvist “adjusts his course, then hits (Grzelcyk) forcefully from behind with speed, driving him violently into the glass and causing an injury.”

It was the decision of the league that Sundqvist had time to react to Grzelcyk’s movement but reacted by “cutting across Grzelcyk’s body” which resulted in a more forceful and direct hit to the upper body and head.

Updated: For today, at least, Sanford steps in for Sundqvist on Blues' fourth line

Berube said the move is not yet finalized yet. Also: Tarasensko, Thomas don't practice, but coach says Tarasenko's day off is just for maintenance; Dunn doesn't sound ready

For the first time as Jenna and Matt Kovarik, the newlyweds entered their wedding reception to the sounds of “The St. Louis Blues March.” Shor…

It’s inevitable. Whenever there is a major sporting event being televised by a network, fans of both teams claim the national broadcasters are…

BenFred: Blues' story could be a movie in the making, but it might not do the tale justice

Carl Gunnarsson is in the script.

Blues' Oskar Sundqvist and Bruins' Matt Grzelcyk look for the puck immediately after Sundqvist checked Grzelcyk into the boards in Game 2 of the Stanley Cup Final. Grzelcyk then fell to the ice and had to be helped to the dressing room. Because of the hit, Sundqvist has been suspended by the NHL for Game 3, and Grzelcyk is not expected to return. Photo by J.B. Forbes, jforbes@post-dispatch.com

Oskar Sundqvist of the Blues was suspended for one game of the Stanley Cup Final for this Game 2 hit on Boston's Matt Grzelcyk. (Post-Dispatch photo by J.B. Forbes)