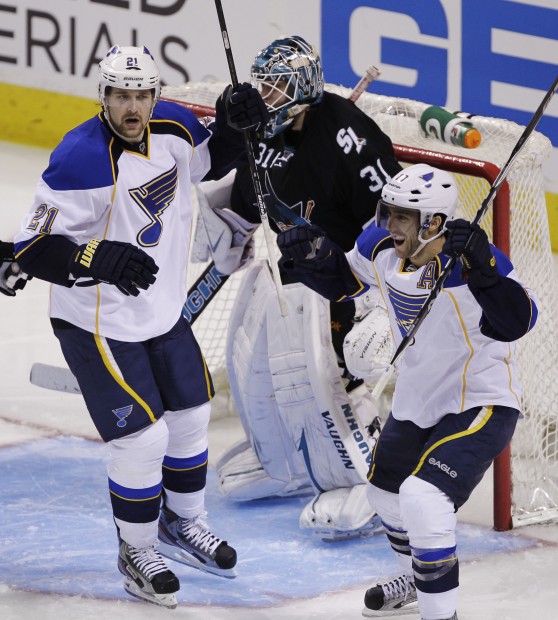 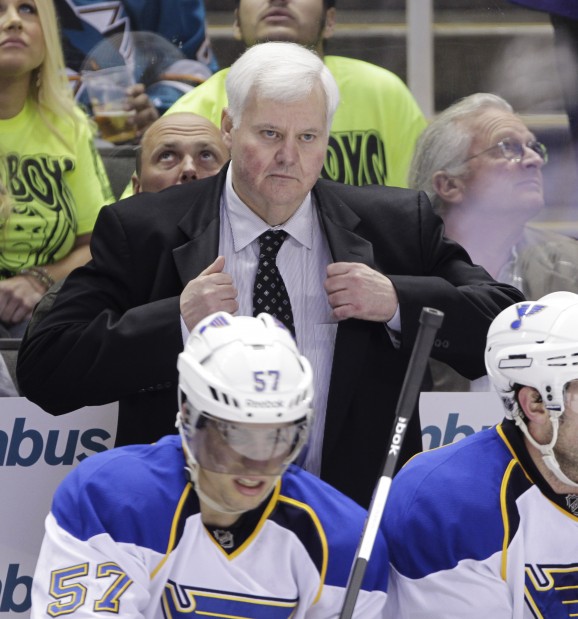 Blues coach Ken Hitchcock watches the action during the series win over the Sharks. (AP Photo)

SAN JOSE, Calif. • Blues coach Ken Hitchcock prides himself on promoting the game of hockey. In the past two days, he's done a dandy job of selling the city of San Jose.

"They've got great tourist attractions, great golf courses, they've got everything," Hitchcock said. "We just don't want to do anything."

Some 70 hours have passed since the Blues hung on for a 4-3 win over the Sharks in Game 3 of the first round, giving them a 2-1 lead in the best-of-seven series. The team practiced Wednesday after limiting Tuesday to an off-ice workout and a team dinner. Most of the players' time has been spent either milling around downtown San Jose or hanging out in a private lounge in the hotel.

"There's a TV and the playoff games are on," Blues forward T.J. Oshie said, describing the scene. "(David Perron) is on his computer, (Alex Steen) is playing music, and we've been playing cards. The cards get pretty heated. It seems like it's everyone against (B.J. Crombeen). He gets on guys when they make certain plays that help out other guys, and then when he makes them, it's fine. It's everyone vs. Beener."

Tonight, though, it finally will be the Blues vs. the Sharks, and while many agreed that the two days off has been re-energizing, the club is eager to resume the series.

"I said before the last game that it's too much time between games because you'd like to go back out there and not lose any edge that you had in the last game," Blues captain David Backes said. "You just sit around and think of ways to improve your game ... the things that haven't gone as well as we've liked. But two days is probably too much time to think about it."

The Blues are thrilled with their power play, which scored three goals in the win Monday and is five for 10 in the series. But at even strength, the Blues and San Jose have four goals apiece, which includes a four-on-four goal by the Sharks.

The Blues were second in the NHL in the regular season in five-on-five goals for and against (1.34), but they are sixth among the 16 playoff teams (1.33).

"In order to win the next game, we have to play better five on five," Hitchcock said. "I'm not looking for more offense. I'm looking for better play. ... We've had some really good stretches, but overall we need to play better period five on five. We can play better. It's better defensively, it's creating more ... it's playing with more consistent energy.

"Our power play has given us the little advantage in the series. But it's still going to end up being a series that five on five is going to win. Of the two teams, we're the team that has to improve the most five on five. Yes, we're up 2-1, but as the series goes, the games get to be more five on five. The spillage from Game 2 wasn't there (in Game 3) because both teams knew what was at stake. When you get two teams that are this close competing-wise, the penalties usually get fewer and fewer because you get to a point where you're afraid to take them."

The Blues lead by one game in the series, and some national media are declaring them the better team. After losing a double-overtime decision Game 1, the Blues outscored San Jose 7-1 in one stretch, starting with a 3-0 win in Game 2 and continuing with a 4-1 lead in Game 3.

But if the Sharks' late rally and the even-strength parity isn't enough to prevent the Blues from having a false sense of security, the Blues say climbing out of a one-game deficit earlier in the series is enough.

"Honestly, it's one game," Steen said. "It's the same thing I said after Game 1. It was a tough loss, but it was Game 1. It's a long series. If you start looking too far ahead, you lose focus on the task at hand. It's a cliché, but the teams that live and play by it, succeed. We won the last game. We thought we had a solid performance until the last few minutes. We'll make some adjustments and go right back at it for Game 4."

The Blues have had plenty of time to think about it the past two days.

"It gives the players an opportunity where they pause and reflect on how they're playing and physically rest up," Hitchcock said. "You're going to see the most energy in any of the games in the fourth game because both teams are going to be rested and ready to go."

Keys to victory for Blues tonight in San Jose

Better 5-on-5 play and another strong game from Elliott are imperative.

Bring your Blues and NHL questions for a live discussion with the P-D hockey writer.

Top line could be broken up, other moves made to improve 'chemistry.'

Blues Talk: Sound off about the Kings series

PHILADELPHIA — Pushed to the brink of a sweep, Pittsburgh's Sidney Crosby, Evgeni Malkin and Jordan Staal pushed back with a vengeance, helpin…

Show YOUR team spirit with new Blues playoff gear at the P-D Store!

Blues coach Ken Hitchcock watches the action during the series win over the Sharks. (AP Photo)