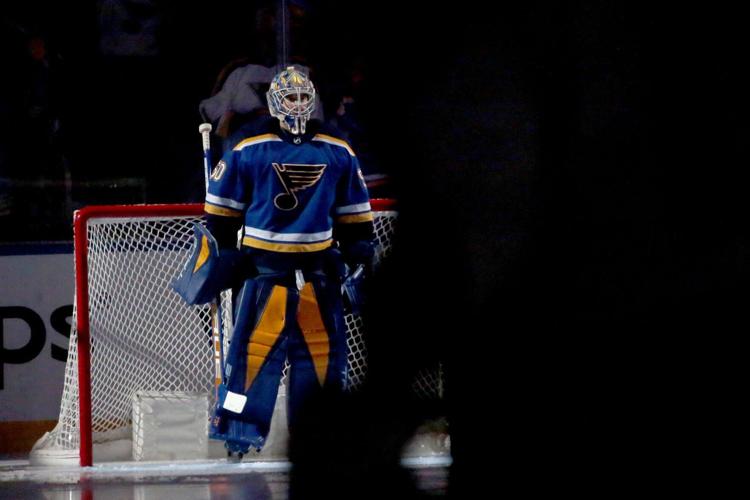 Blues goaltender Jordan Binnington awaits the start of Game 3 of the second round of the 2022 Stanley Cup playoffs at Enterprise Center on Saturday, May 21, 2022. 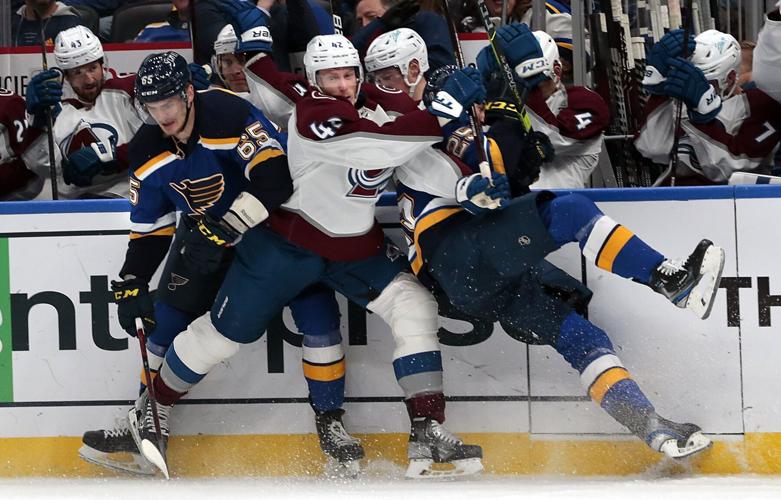 The Avalanche's Josh Manson, center, is called for interference as he blocks the Blues' Alexei Toropchenko, left, and Jordan Kyrou during the first period of Game 6 of the second round of the Stanley Cup playoffs at Enterprise Center on Friday, May 27, 2022. 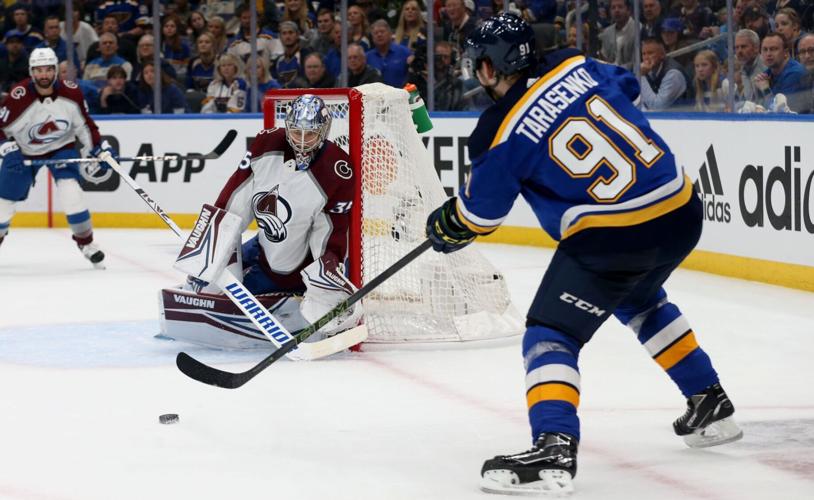 Blues forward Vladimir Tarasenko shoots against Avalanche goaltender Darcy Kuemper in first-period action during Game 3 of the second round of the 2022 Stanley Cup playoffs at Enterprise Center on Saturday, May 21, 2022. 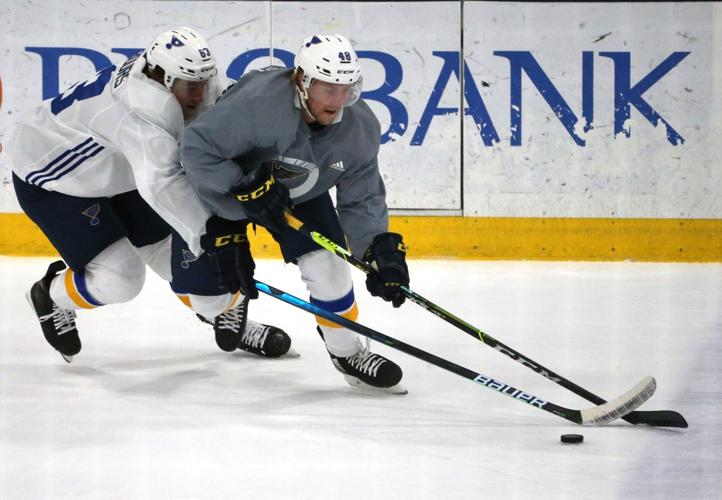 1. Can Binnington handle the load?

Ville Husso is now part of the Detroit Red Wings. His replacement, 36-year-old Thomas Greiss, is coming off arguably his worst year in the NHL. Promising prospect Joel Hofer almost certainly needs another year of seasoning in the minors. So it’s largely up to Jordan Binnington in goal.

He needs to avoid the prolonged midseason slump he experienced a year ago in order for the Blues to have the kind of season they’re looking for. Binnington was playing some of the best hockey of his career before Nazem Kadri crashed into his knee in the second-round playoff series. He needs to begin this season at that level.

Yes, we all know that every forward will play with just about every other forward before the season’s done. That’s the nature of a long hockey season — and that’s how Craig Berube rolls.

But without David Perron, another Blue who migrated to the Detroit Red Wings, someone new needs to line up as Ryan O’Reilly’s primary right wing. Who ends up there this year? Jordan Kyrou? Vladimir Tarasenko? Pavel Buchnevich? Brayden Schenn? Make no mistake, Berube will look at a lot of players there before all is said and done. But it will be tough to duplicate that O’Reilly-Perron chemistry.

The Blues set a franchise record for power play efficiency at 27.0% and ranked second overall in the NHL last season. Perron set the pace, with a team-high 11 power play goals from his spot in the left circle.

But the Blues had balanced scoring with the man-advantage — seven players had five or more goals. Kyrou is the most-likely candidate to step into Perron’s spot on the first power-play unit. He’s never shy about shooting. Brandon Saad is another candidate for more power play time — he had eight PPGs even though he didn’t have a full-time role last season. But his game is more around the net than on the flanks.

There were occasional flashes over the course of the season, particularly down the stretch when Nathan Walker and Alexey Toropchenko brought some intensity. But overall, the Blues didn’t get what they needed from their fourth line — either in goals, or just overall play.

Toropchenko begins the season on injured reserve as he completes rehab/recovery from shoulder surgery. General manager Doug Armstrong put some effort into bolstering the fourth line, bringing in veterans Noel Acciari and Josh Leivo among others. Walker and fellow returnees Logan Brown and Klim Kostin also figure into the mix.

Once again, Bozak has gone through the offseason as an unrestricted free agent. Will there be a repeat, last-minute Bozak signing this year? It looks like we already know the answer to that question. Armstrong all but slammed the door on the possibility when quizzed last week at the NHL Prospect Tournament in Traverse City, Michigan.

“Our camp roster’s pretty well set,” Armstrong said. “I haven’t talked to him in a long time so I don’t know what he’s doing.” Bozak’s five-year run with St. Louis appears over.

The top two pairs on defense appear set: some combination of Justin Faulk, Torey Krug, Nick Leddy and Colton Parayko. Most likely Leddy-Parayko and Krug-Faulk. As for the third D-pairing, Marco Scandella’s right hip surgery Tuesday will sideline him for six months, and thus clears the picture to a degree.

But three players are still competing for the two spots in the third pair: Scott Perunovich, Niko Mikkola and Robert Bortuzzo. Perunovich brings a puck-moving presence and had some good moments quarterbacking the power play last season. This is a big camp for him — he must stay healthy.

Even with the offseason departures of Perron and Husso, this roster is pretty well set. Among the few uncertainties is whether top prospect Jake Neighbours sticks with the big club. After his strong showing in camp last season, and nine games played with the Blues in October and early November, it will be a disappointment if Neighbours doesn’t make the roster out of camp this year. Armstrong indicated last week that Neighbours needs to be among the top nine forwards to make a “varsity” spot for him worthwhile. Otherwise, he’s better suited get more minutes in Springfield.

The team’s other top prospect, Zachary Bolduc, remains junior eligible and probably ends up playing in the Quebec Major Junior Hockey League again this season. But you never know. Bolduc is one of those players with a knack for scoring — he had 63 goals in juniors last season — and will try to turn heads in whatever preseason games he gets for the Blues.

In time, he could replace Perron as a high-scoring French Canadian with prowess on the power play. It just may not be this year for the 19-year-old from Trois-Rivieres, Quebec. He scored in each of his final two games at the NHL Prospect Tournament.

9. Will the goals keep coming?

The Blues had one of their highest-scoring teams in franchise history last season, including nine players who scored 20 goals or more. Scoring was up throughout the NHL last season; it remains to be seen if that continues to be the case in 2022-23.

The Blues had several players set career highs in goals, assists and/or points — Ivan Barbashev, Robert Thomas, Buchnevich and Kyrou among them. Is it realistic to think this trend will continue, or will a Blues player or two slump his way through an off-year? Even if that’s the case, balance and depth on offense should again be a team strength.

Vladimir Tarasenko requested a trade a year ago but didn’t get shipped out in a tumultuous late spring and early summer. But once he reported to camp, Tarasenko kept his head down and to a large degree kept his mouth shut. He was a team leader and a model citizen, en route to career highs in assists (48) and points (82).

Tarasenko apparently did not rescind his trade offer this offseason. And once again, did not get traded. Additionally, Tarasenko’s contract expires after this season. Will he be able to keep these issues from becoming distractions and remain a highly productive player?

Gordo on the NHL: Assessing the Central Division as training camps open

It's been quite a journey for Blues goalie prospect Vadim Zherenko

Blues close prospect tournament with another clunker in Traverse City

Like the rest of Blues prospects, Zachary Bolduc gets back on his game

Despite the losses of Perron and Husso, he expects the Blues to once again be in the mix in the Western Conference.

As the Blues open camp, the number of 2019 Stanley Cup vets dwindles

Perron and Bozak are gone, but plenty of talent remains as squad opens training camp.

Blues goaltender Jordan Binnington awaits the start of Game 3 of the second round of the 2022 Stanley Cup playoffs at Enterprise Center on Saturday, May 21, 2022.

The Avalanche's Josh Manson, center, is called for interference as he blocks the Blues' Alexei Toropchenko, left, and Jordan Kyrou during the first period of Game 6 of the second round of the Stanley Cup playoffs at Enterprise Center on Friday, May 27, 2022.

Blues forward Vladimir Tarasenko shoots against Avalanche goaltender Darcy Kuemper in first-period action during Game 3 of the second round of the 2022 Stanley Cup playoffs at Enterprise Center on Saturday, May 21, 2022.