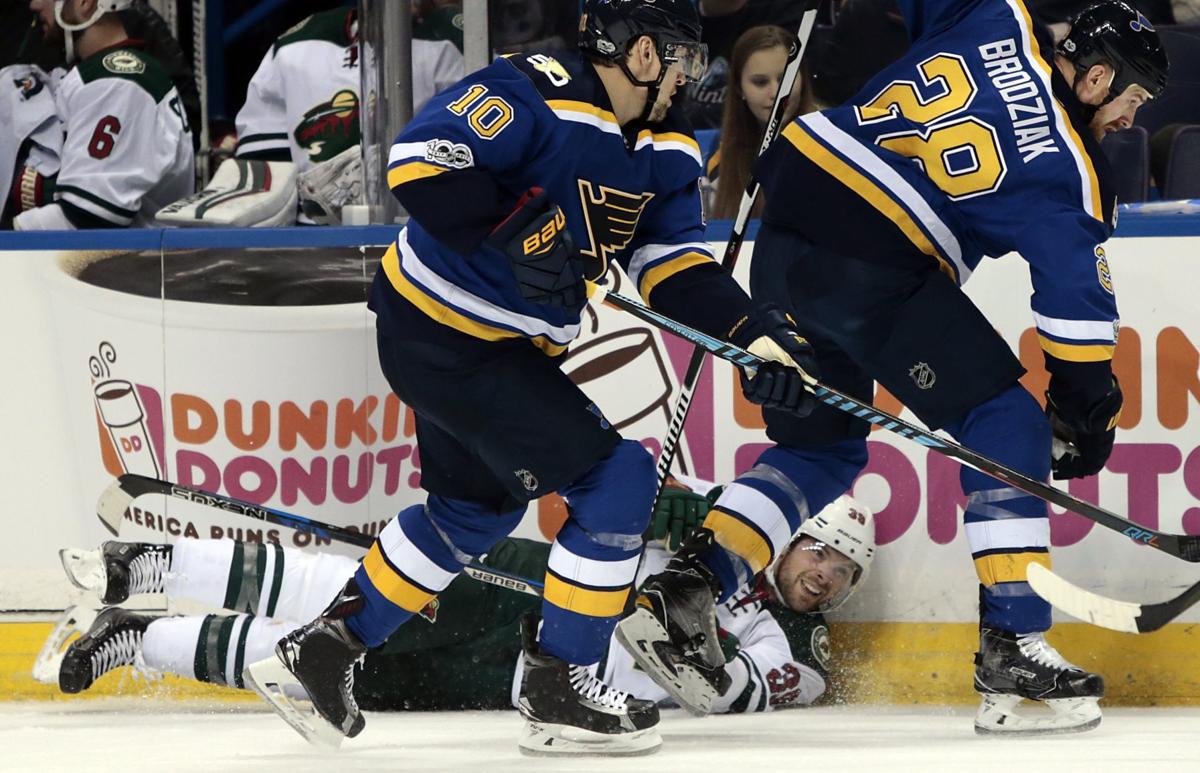 Minnesota Wild's Nate Prosser loses his footing while tangling with St. Louis Blues Scottie Upshall (10) and Kyle Brodziak during Game 3 of the first round of Stanley Cup playoffs at Scottrade Center on Sunday, April 16, 2017. Photo by Robert Cohen, rcohen@post-dispatch.com 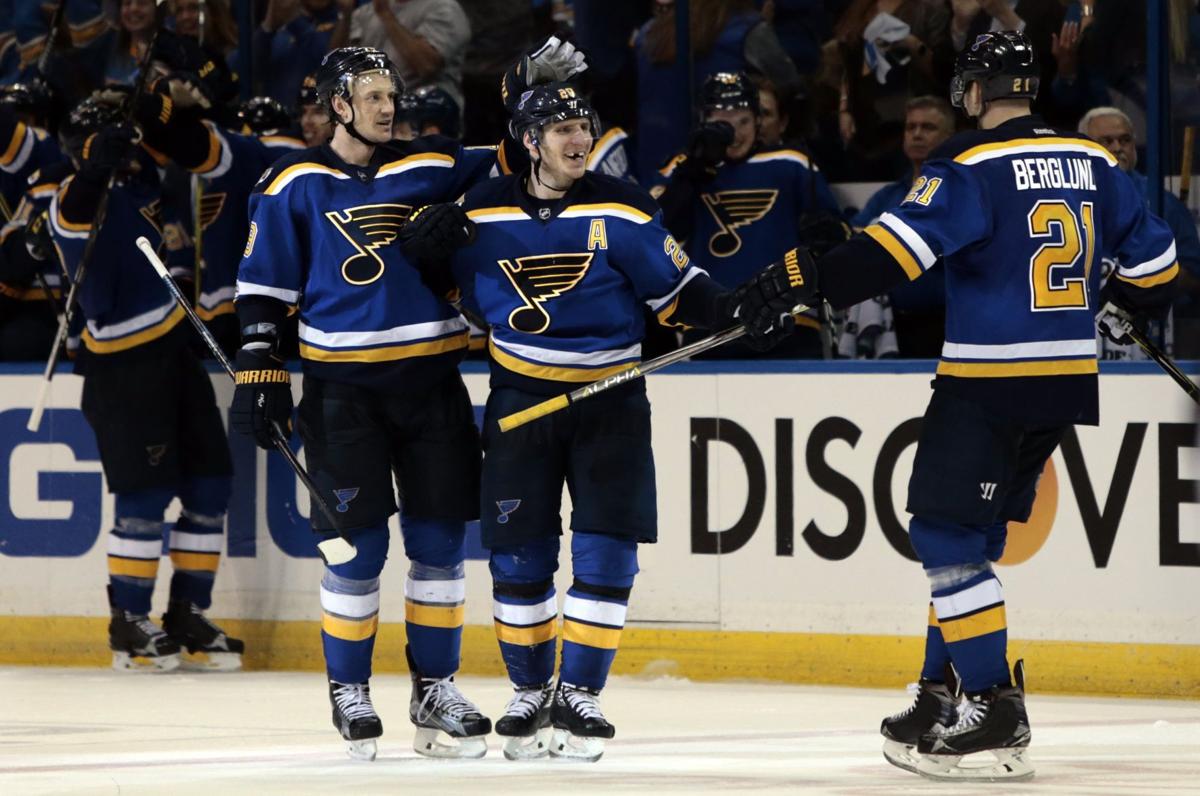 St. Louis Blues Alexander Steen is congratulated by Jay Bouwmeester (left) and Patrik Berglund after scoring an empty net goal in the third period against the Minnesota Wild, to win 3-1 in Game 3 of the first round of Stanley Cup playoffs at Scottrade Center on Sunday, April 16, 2017. Photo by Robert Cohen, rcohen@post-dispatch.com

The Blues will have a chance to clinch their Western Conference quarterfinal series against Minnesota in sweeping fashion Wednesday at Scottrade Center, and with that will come great pressure.

How will Mike Yeo’s club handle it?

Game 4 will be the first time in 16 years the Blues are in position to sweep a playoff opponent; the last was in the 2001 conference semifinals against Dallas, and they in fact dusted off the Stars.

More recently, the Blues have played in five postseason games in which they had the potential to clinch and have not fared well. They went 2-3 in last year’s run, which ended with a loss to San Jose in the conference finals.

In the first round, the Blues had Chicago pinned against the boards, leading the series 3-1, but let the Blackhawks slip loose for back-to-back wins that forced a Game 7. They eventually won the decisive game on Troy Brouwer’s third-period goal and advanced.

Then in the second round, the Blues had Dallas down 3-2 and blew another chance, sending them on the road for another Game 7. They prevailed in that one too, setting the stage with San Jose in a series that was won in six games by the Sharks.

“We lacked that killer instinct,” Blues captain Alex Pietrangelo said. “That game against Chicago last year, it took until the third period with what ... eight minutes left to get the goal? It’s never over until it’s over, I guess. We’ve learned to just keep pushing regardless of the situation.”

This is Yeo’s first season behind the Blues’ bench, but he is aware of the team’s struggles in these situations. In fact, he was Minnesota coach in 2015 when a series between the clubs was tied 2-2 and the Wild won the last two. Before that, in 2014, the Blues were ahead 2-0 against Chicago and lost in four straight, and in 2013, they were up 2-0 on Los Angeles and dropped four in a row.

Those weren’t clinching situations, but they were pressure-packed environments that the Blues didn’t handle well.

“In the past, I know that there was some regret as far as not closing series when you had a chance to here,” Yeo said. “I think it’s how you mature and how you grow as a group. I know we’ll talk about some of those things. For me, the biggest thing is, ‘Can we push aside the whole idea of finishing off the series and stay focused on playing a really strong game?’

“We just need to play well. We want to win the round and we want to advance and we want to keep competing here, but the reality is that’s not going to happen unless we play really well — focus on the things that we’ve done well. When you do those things, you give yourself a great chance.”

2 Bens in a Benz: Jake 'The Ssssnake' Allen leads the way

David Perron hasn’t been involved in the Blues’ last three playoff appearances. He was traded away after the loss to LA in 2013, but he says the message from Yeo has an alternate tone from previous years.

“Those are the kinds of sentences that are different than guys were used to hearing here before,” Perron said. “He’s all about the process and things like that.

“That’s why it’s seven games. I understand why this city for the last several years is always talking about (the Blues’ failure to clinch). But every team I’ve been on that went to the playoffs, it was like that. I think every team at one point had the trouble.

“If you go to Game 7s, it’s because you put yourself in that situation and you have a chance to win. So, I don’t think it’s any negative to be in those situations.”

But in this year’s case, the Blues would like to avoid a Game 7 if possible. A year ago, they played 14 games compared to 12 for San Jose before the teams met in the conference finals. The Sharks finished off their first-round opponent in five games, while the Blues made an extra trip to Chicago, and fatigue appeared to be a factor.

“It certainly adds up,” Pietrangelo said. “I think you look, we played two Game 7’s, it adds up. So if you can play three less games (this year) than we did last year in the first round, it’s obviously going to help. But that’s not going to be easy.”

That’s one thing the Blues have learned about series clinchers.

“They’re tough games,” defenseman Colton Parayko said. “The teams are kind of fighting to stay in and stay alive and it’s an opportunity for us to obviously advance, but it’s the same opportunity for them to stay alive and play the best game. It’s tough hockey for sure, but that’s what makes it so fun, when we can come together as a team and continue to push.

“They’ve got an unbelievable hockey team over there, they’ve got some great players, guys that can score goals, good defenders. It’s an opportunity for us to get better and we’ve got to keep getting better every game because as the series progresses ... it just keeps getting tighter.”

Added Yeo: “We still have a ton of respect for the team that we’re playing against. We know how close the games have been. We’re not trying to think about the next round or anything else right now. What we’re focusing on is to be at our best (Wednesday) and that’s all we can do right now. And obviously if you can do that, then you give yourself the best opportunity.”

Blues Talk: Sound off about the Nashville series

See what the Post-Dispatch columnist has to say about Cardinals, Blues and St. Louis sports issues.

The legend who had his old No. 5 jersey retired by the Blues earlier this year would rather not see a Game 5 this series.

Blues center practices with team for first time since he was hurt.

Bouwmeester's game a lot louder than he is

Defenseman has been stalwart for Blues.

Minnesota Wild's Nate Prosser loses his footing while tangling with St. Louis Blues Scottie Upshall (10) and Kyle Brodziak during Game 3 of the first round of Stanley Cup playoffs at Scottrade Center on Sunday, April 16, 2017. Photo by Robert Cohen, rcohen@post-dispatch.com

St. Louis Blues Alexander Steen is congratulated by Jay Bouwmeester (left) and Patrik Berglund after scoring an empty net goal in the third period against the Minnesota Wild, to win 3-1 in Game 3 of the first round of Stanley Cup playoffs at Scottrade Center on Sunday, April 16, 2017. Photo by Robert Cohen, rcohen@post-dispatch.com