Blues center Ryan O'Reilly, left, prepares to make a pass from behind the net under pressure from Dallas defenseman Ryan Suter in  in the second period of a game in Dallas on Saturday, Nov. 20, 2021. (AP Photo/Tony Gutierrez) 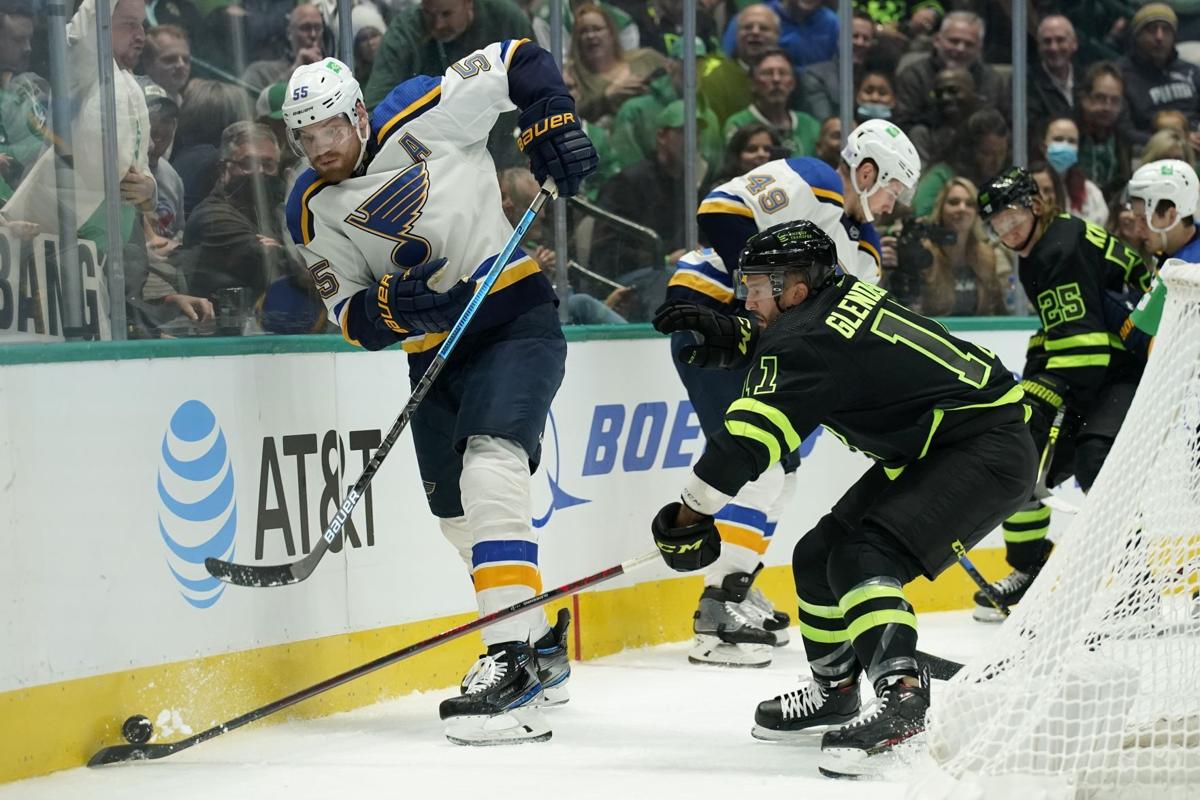 The Blues' Colton Parayko, left, and the Stars' Luke Glendening compete for control of the puck on Saturday night in Dallas.

It was the third period on Saturday night in Dallas, with the Blues trying to come back from a 3-1 deficit. With 4:41 to go in the period, Robert Thomas skated the puck out from behind the Dallas net and passed to Vladimir Tarasenko in the slot.

The Blues got the puck back and, six seconds later, Thomas had the puck behind the goal line and passed through the slot to Pavel Buchnevich on the far faceoff dot.

Buchnevich would get another shot at the end of the possession that was stopped by Dallas goalie Jake Oettinger. The lesson in all this for the Blues is this: They’re not lacking for chances. They’re lacking for goals.

The Blues are in a nasty run of the young season, with losses in five of their past six games. Their 5-0 start gave them enough of padding that about a fifth of the way into the season, they are in third place in the Central Division, but that edge is slipping fast. When the Blues went to Carolina on Nov. 13, they were fourth in the NHL in points percentage. They woke up Sunday morning in 18th and face Vegas on Monday at Enterprise Center.

It didn’t have to be this way. In the first five games of this six-game run, the Blues had more expected goals than their opponents, according to the models at hockeyviz.com and moneypuck.com. Moneypuck also has a program that simulates the game a thousand times, looking at the scoring chances they had and assuming average goaltending. In those simulations, the Blues, more often than not, should have beaten Nashville, Carolina, Edmonton and Dallas — four of the five teams they lost to in this run. One or more goals along the way could have changed those losses to wins or at least produced a point.

“When you find ways to lose games,” captain Ryan O’Reilly said Saturday, “you can tell we’re getting these situations and we’re doing a lot of good things. Guys competing and working for each other, good talk. It’s just we get into situations and ... we’re not confident there and that’s something we’ll build back up. It’s not trying to think our way through it and play cautious. We have to just kind of get back on our toes and stay on our toes and go take it. When we were winning games early in the year, that’s the way we were. We were playing lighter and just going at them and right now everyone’s working, just a little hesitation there where it’s not as clean as we need to be in. We’ll be fine, we’ll get out of that. We all feel it. We’ve got to just keep working.”

“It’s not consistent, that’s for sure,” coach Craig Berube said. “We had a bunch of good looks and we’re just missing the net. … We’re not getting good shots to score. I mean, we are shooting it but it’s hitting the goalie in the chest or in the shoulder. We’re getting looks, but it’s one of those things. You’ve got to just keep pushing and keep grinding and get your opportunities like that and eventually they’ll go in.”

So in the best of worlds, the Blues aren’t doing as poorly as it seems, and are running into a span of bad luck. In the real world, though, the points they’ve lost in this slump are points they’re not getting back. They’ve probably let at least four points, maybe more, get away in a division that figures to be closely contested.

Some players are feeling it more than others. At moneypuck.com, , leads the team in goals below expected at -2.5, followed by O’Reilly, at -1.9. Thomas has just two goals on the season, with 14 assists, seven of them in the five recent losses. O’Reilly hasn’t scored a goal in his past nine games, dating to Oct. 23.

Puck luck has a way of coming around. In that five-game winning streak to start the season, the Blues might have gotten a win or two in games in which they were outplayed. This recent stretch has also shown the fine line the Blues are walking. Dallas got two scoring chances shorthanded and converted both, dooming the Blues.

Finishing chances would help cover up some other issues for the Blues. Since Nov. 7, when they started their busiest three weeks of the season, they are 26th in goals per game, at 2.38 (while third in shots per game), and 24th in goals allowed per game, at 3.25. Their penalty-killing unit, which started the season as one of the best in the league, is 30th since Nov. 7, stopping just 60% of opposing power plays. Foes have scored at least one goal with the man advantage in six of the past seven games in which the Blues have had to kill a penalty.

“I think just stringing it together for a full 60 (minutes is the key to a turnaround),” said Brandon Saad, who with three goals in the past two games is one of the few Blues having things go his way at the moment. “We had some good shifts (Saturday). Obviously, it was a big special teams battle that we lost. But otherwise I think it’s just putting it together for a full 60. We have some good periods, some good shifts, create chances. But we can’t have those lapses that we’ve had. Teams are good, they’re capitalizing on those chances and it’s costing us the hockey game.”

Backup Ville Husso will see a lot of action over the next 10 days. Team also calls up goaltender Charlie Lindgren from their AHL affiliate, but will have to use an emergency backup tonight

In his first NHL game in St. Louis, the son of defenseman Jeff Brown scored in the Blues' big comeback win.

Blues notebook: Berube looking to get more out of Tarasenko

Walman and Brown, who wouldn't be in lineup if team was healthy, score, and Husso stops 48 of 51 shots

Ultra-tight cap situation prevents team from adding a replacement from their AHL affiliiate in Springfield (Mass.)

On a day they lost Binnington and Faulk to COVID, Lightning break 2-2 tie in the third period to get win

Veteran forward is sidelined, apparently because of a concussion.

With a day to regroup, Blues face another tough test in Florida

They had two of their top players plucked from the lineup on Thursday in Tampa because of COVID; no new cases reported on Friday

Blues center Ryan O'Reilly, left, prepares to make a pass from behind the net under pressure from Dallas defenseman Ryan Suter in  in the second period of a game in Dallas on Saturday, Nov. 20, 2021. (AP Photo/Tony Gutierrez)

The Blues' Colton Parayko, left, and the Stars' Luke Glendening compete for control of the puck on Saturday night in Dallas.