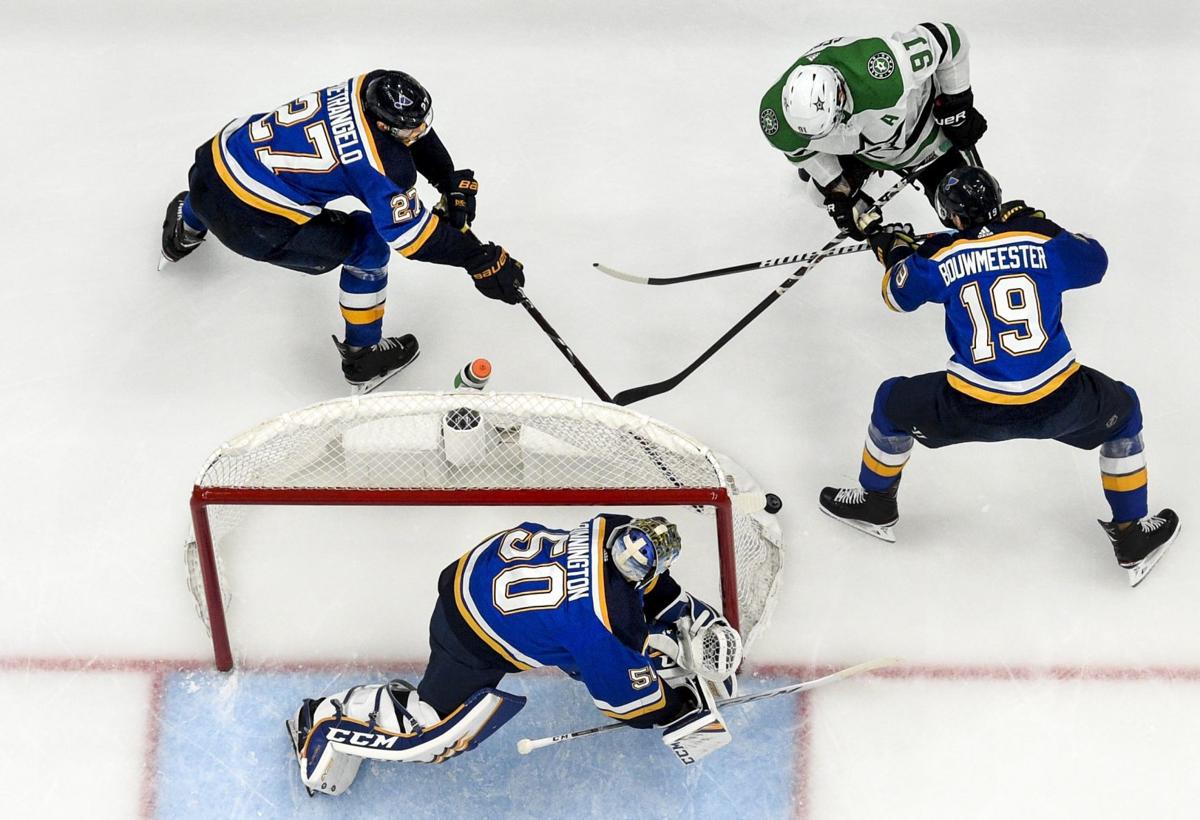 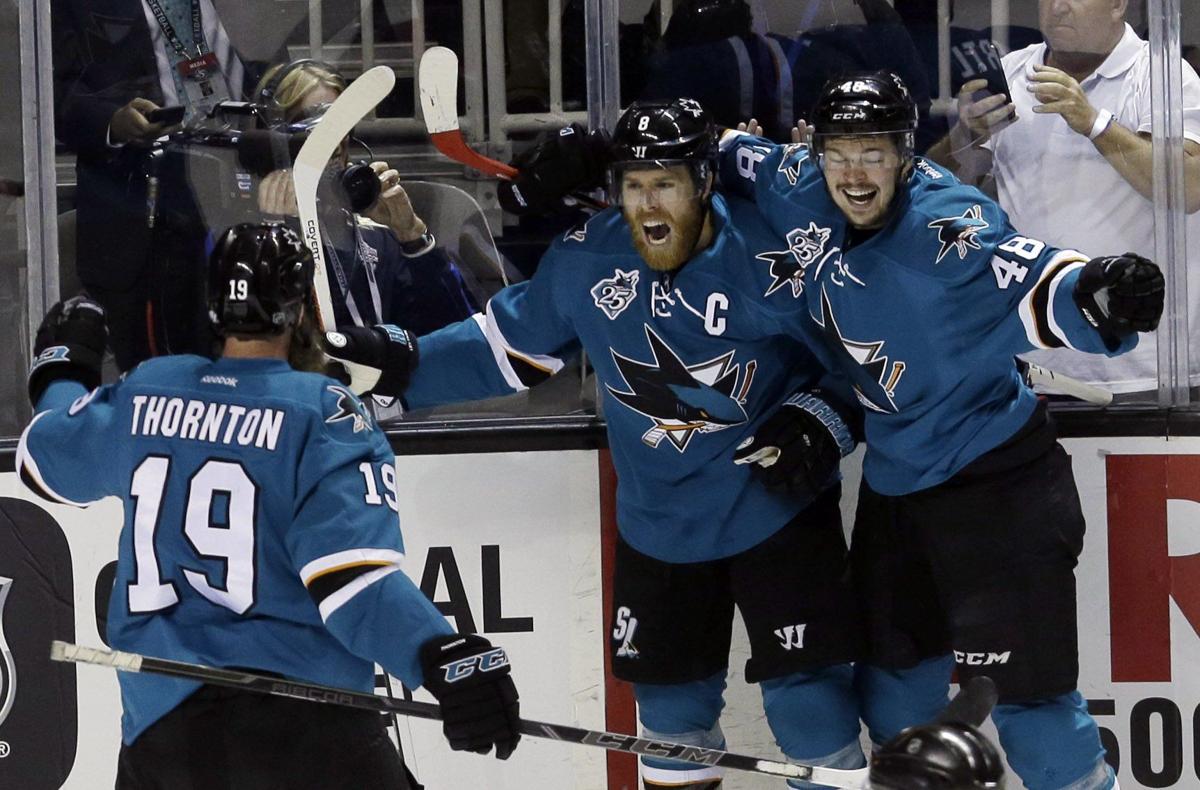 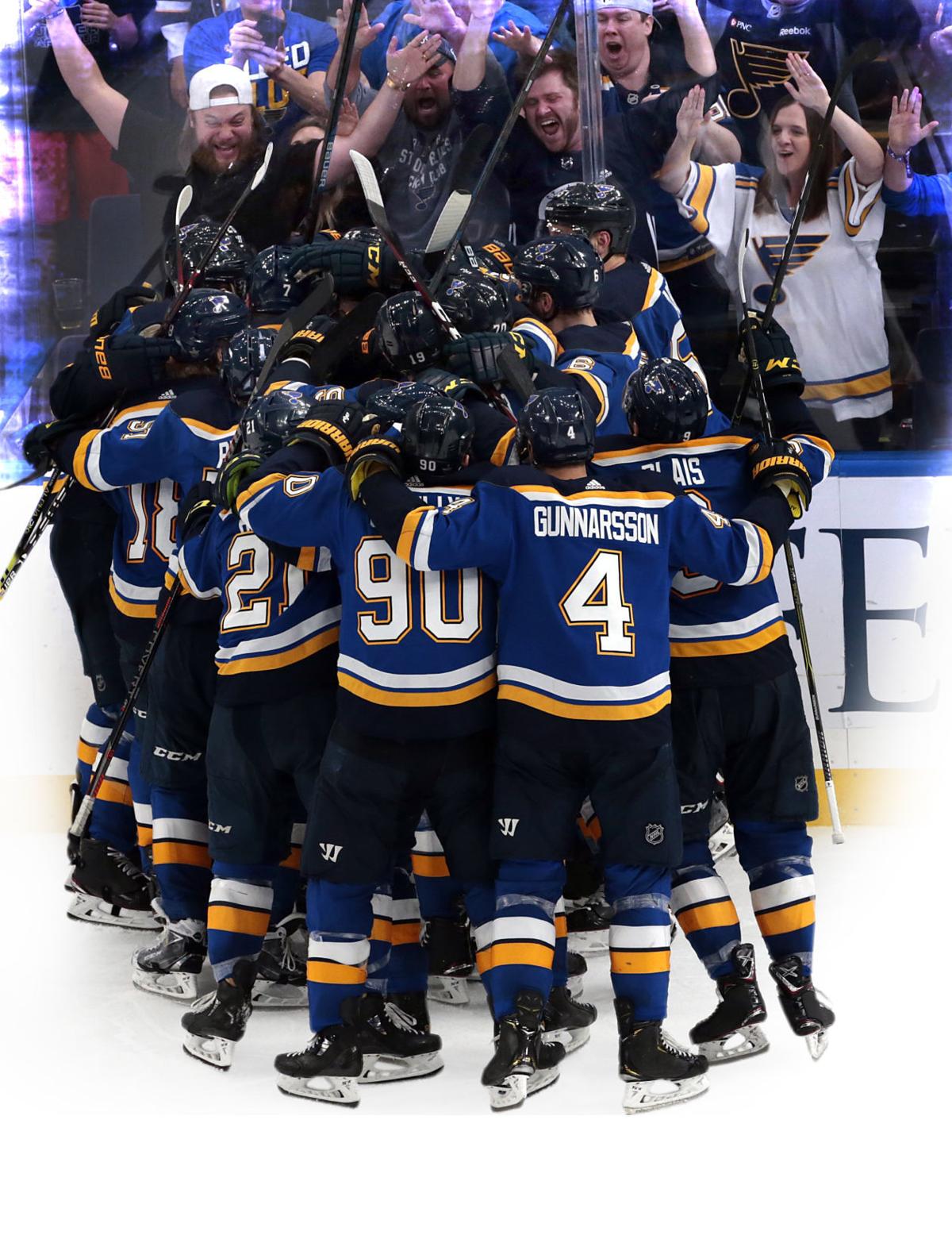 Blues players celebrate after they eliminated Dallas in the second round of the playoffs.

SAN JOSE, Calif. — Defense has been the backbone of the Blues for several years, basically since Doug Armstrong became general manager nearly a decade ago.

It’s a point of organizational pride. Coaches come and go, players also to a degree. But strong defense is part of the Blues’ fabric — their identity.

“No matter what generation, strength down the middle of the ice — in goal, defense, center ice — is usually the recipe for success,” Armstrong said Friday. “I believe in having bigger defensemen. You do have to have the mobility now, but we do like the size back there. They’re tough to get around. So we believe in the defense.”

“It’s always been a strong suit of our team,” veteran defenseman Jay Bouwmeester said. “Not just the defensemen we’ve had. But the way that we play (defense) as a team.

“When (Ken) Hitchcock came here, that’s his game, and he kind of instilled that in everyone. I think it showed a lot of the forwards how valuable it is to play that way. Because you do generate some offense off of it.”

When you’re playing tight defense that can lead to tight games.

“For my time here, we probably play more one-goal games than a lot of teams,” Bouwmeester said. “So I think you get comfortable in those situations where this time of year the games, they’re all tight. The way we’ve played over they years just gets you used to those games. You do take pride in it.”

That has been particularly true this season. Starting with a 3-2 comeback victory Feb. 5 at Florida, the third game of the franchise-record 11-game winning streak, the Blues have gone 18-2-4 in one-goal games. In the playoffs, seven of their eight victories combined over Winnipeg in Round 1 and Dallas in Round 2 came by one goal.

But that Blues’ defense will be put to its stiffest test of these Stanley Cup playoffs against the San Jose Sharks in the Western Conference finals, which start Saturday at 7 p.m. (St. Louis time) at SAP Center.

During the regular season, the Sharks averaged 3.52 goals per game, second only to the Tampa Bay Lightning and nearly a goal a game better than the team the Blues dispatched in second round — the Dallas Stars.

In the playoffs, the Sharks have fallen a little — averaging 3.07 goals per game. But that still ranks third among all 16 teams that qualified for postseason play.

So if the Blues are going to make their first Stanley Cup finals series since 1970, they’re going to have to find a way to keep the lid on a potent Sharks attack of Joe Pavelski, Tomas Hertl, Timo Meier, Evander Kane, Logan Couture and Co.

“This is not gonna be a one-line shutdown (series),” Blues defenseman Alex Pietrangelo said. “This is a team that can score from throughout their lineup. So we’re gonna have to find a way as a collective group to chip in defensively because they score from every angle.”

So the last thing the Blues want to do is get into shootouts with the Sharks.

“The best way to play against teams that are strong offensively is make them play in their own end,” Bouwmeester said. “Because they don’t usually like that. When we’re playing our best, that’s what we do. We spend a lot of time in the other team’s end and try to kind of grind away at it.”

In other words, play keep-away.

The Sharks have size, but some of their big guys can skate, not unlike the Winnipeg Jets. In former Norris Trophy winners Brent Burns and Erik Karlsson, they have defensemen who like to get involved in the rush — not unlike John Klingberg and Miro Heiskanen of Dallas.

They like to put a lot of shots on net, and they are masters at tip-ins and deflections. The latter characteristic has caught the eye of coach Blues interim Craig Berube and his staff as they prepared for the series.

“We’re gonna have to be strong defensively in our own end,” Berube said. “And do a real good job at our net. This team goes to the net hard. They get their sticks on a lot of pucks — the way they shoot the puck in the offensive zone and get it off and get it through.”

The Blues did a decent enough job defensively in three regular-season games against the Sharks, limiting them to seven goals or 2.33 goals per game. But it was a feast-or-famine deal. The Blues allowed four goals in a shutout loss, blanked the Sharks once in a 4-0 win, and lost 3-2 in overtime.

Two of those regular-season games this season came in November, before Berube had replaced Mike Yeo. Partly for that reason, Berube said the Blues spent more preparation time for this series looking at what the Sharks were doing in their playoff series against the Vegas Golden Knights and Colorado Avalanche than the Blues-Sharks games from this season.

And just like good defense is a Blues staple, good offense is embedded in the Sharks’ DNA.

“With these guys here, they’ve had good teams forever and they’ve always kind of played the same way,” Bouwmeester said.

The Blues obviously hope defense wins championships — or at least this series.

Hockey Slang: Biscuit in the Basket

Hockey Slang: Biscuit in the Basket

BenFred: No need to worry, Blues fans. Armstrong won't let Berube get away.

The better the Blues played after pivoting to interim coach Craig Berube, the louder a common-sense question echoed. GM Doug Armstrong had been dodging a straight answer. Why was Berube, who has pressed every right button for the Blues, still coaching under an interim title?

Can the Blues make history? Test how well you know your Blues history.

How much do you really know about the St. Louis Blues? Take our Blues IQ Quiz and find out. You'll also be entered to win an Alexander Steen a…

Blues players celebrate after they eliminated Dallas in the second round of the playoffs.