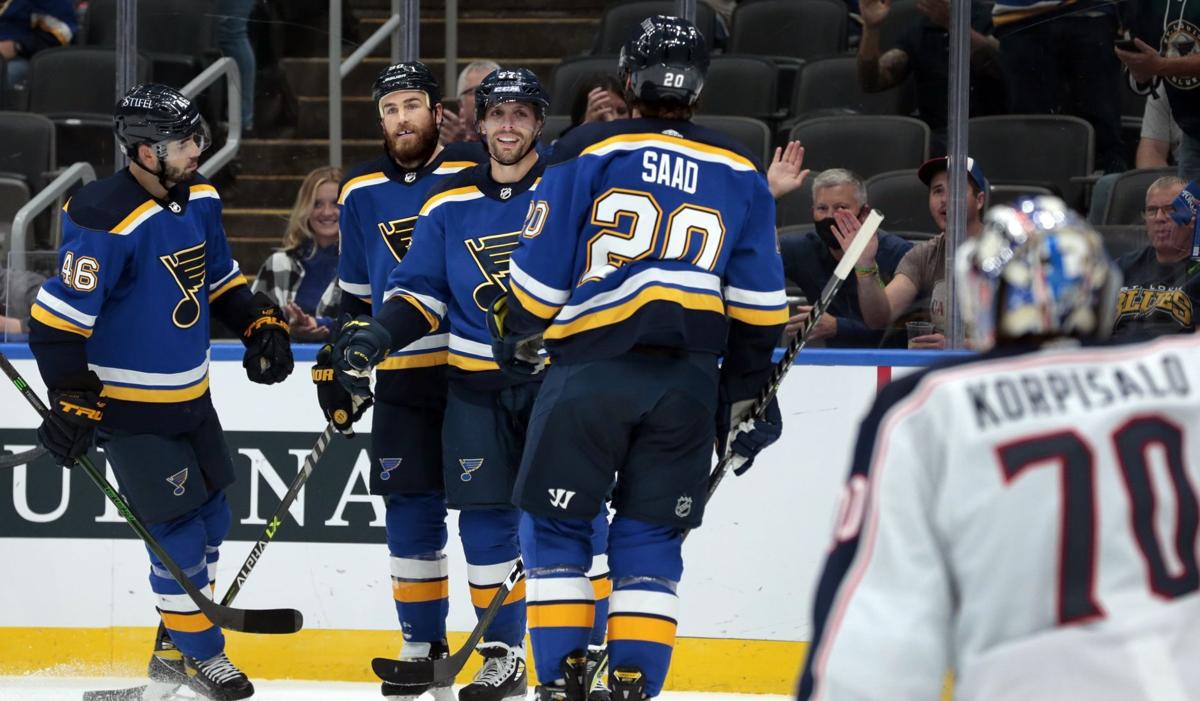 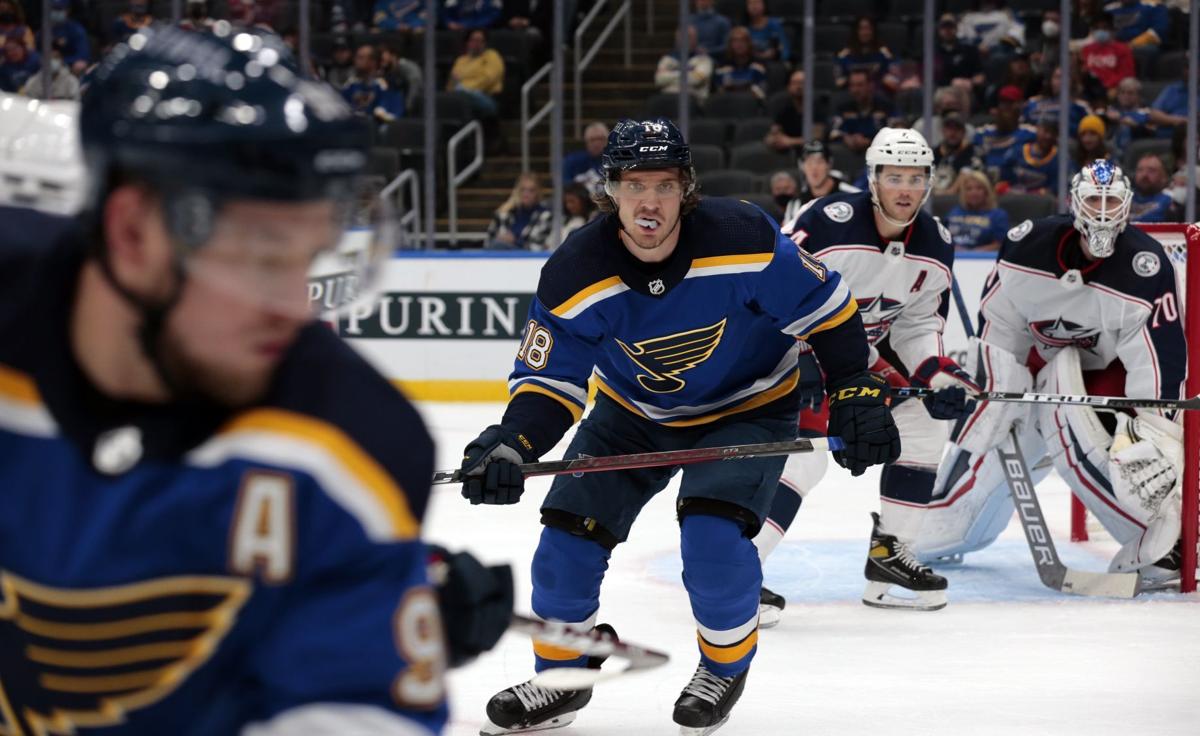 St. Louis Blues' Robert Thomas (18) looks for a pass from Vladimir Tarasenko (91) in the first period goal against the Columbus Blue Jackets in the final preseason game at Enterprise Center on Friday, Oct. 8, 2021. Photo by Robert Cohen, rcohen@post-dispatch.com 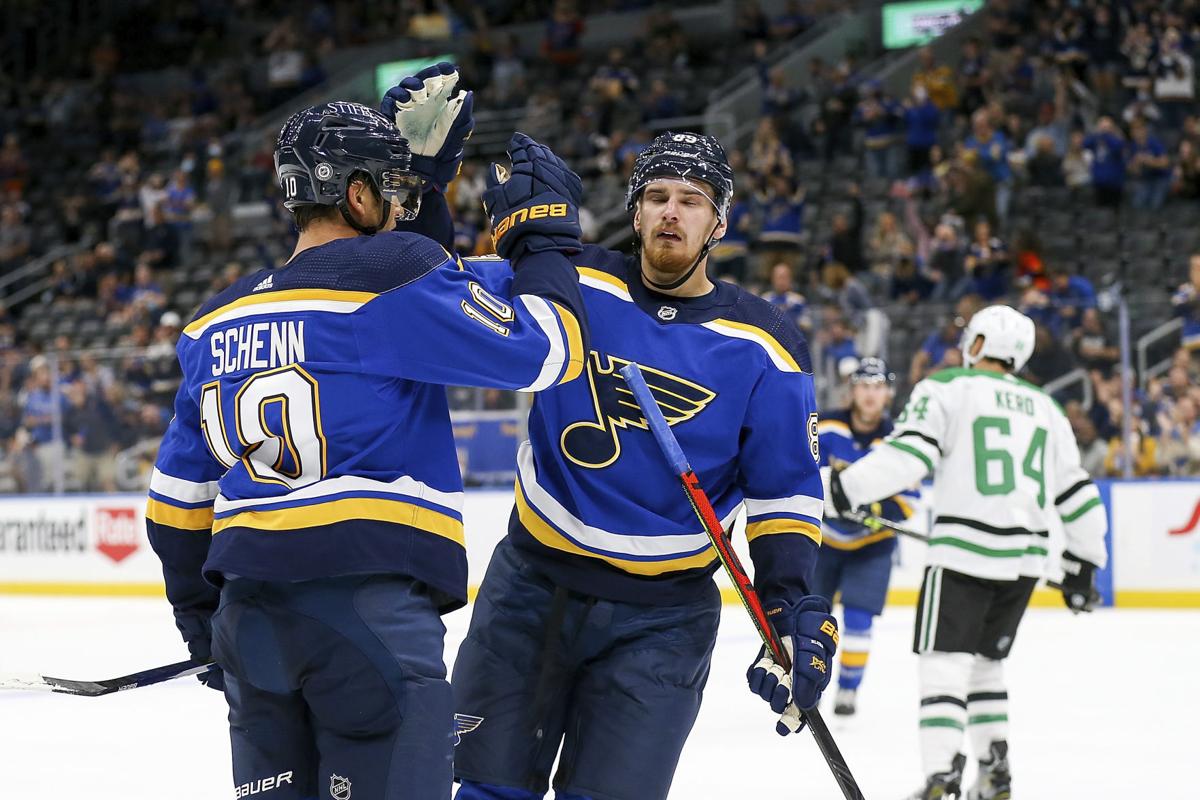 VAIL, Colo. — Craig Berube spent much of the offseason thinking about it. Plus, an eight-game preseason to experiment with different combinations.

So a lot of thought and evaluation has gone into the lines he’s expected to trot out Saturday against the Colorado Avalanche. On paper, it looks formidable:

“I feel if you look at our lineup, we have guys on every single line that can play against any other line on any team,” Schenn said. “So there’s not gonna be a matchup where you feel uncomfortable.

“There’s a little bit of everything. Whether it’s a line with speed, or playmaking or scoring ability, or guys who are good both ends of the ice. We feel like we’re pretty well-balanced.

“The past year and a half haven’t gone the way that we wanted to. We feel like we need to take a step back and be a top team in this league.”

Assuming the defensive corps and goaltending come along for the ride, this could be the lineup to do it.

Of course, injuries undoubtedly will change the look of things up front. The Blues are missing only one key piece at the moment in center Oskar Sundqvist, who begins the year on long-term injured reserve (LTIR) as he completes his rehab/recovery from knee surgery.

(If healthy, Sundqvist probably would slide into Neighbours’ spot on what would be an eye-catching fourth line of Barbashev-Bozak-Sundqvist.)

No one’s suggesting that even with good health, the opening-day lines won’t change over the course of the season. That’s just the way it works in the NHL as players slump, go on hot streaks, and get injured.

But for openers, Berube likes the looks of things, particularly in his top nine.

“Yeah, there’s a lot of potential,” Berube said. “I think all the three lines there can score, and do a good job at both ends of the ice.

“And you have different options of people like Neighbours and Barbashev that can move up and down your lineup. So it’s good balance. And it’s important that everybody understands that, understands that it’s team first and that’s what we’re looking at.”

While recognizing that line changes are inevitable, Berube will be hesitant to split up the tandems of O’Reilly-Perron and Schenn-Buchnevich. He’s also had Thomas-Tarasenko together throughout camp.

Most of the preseason experimentation was done on left wing before Berube came up with the current look.

“I think Schenn-Buchnevich is a little bit more of a rush line for me,” Berube said. “More speed on that line. A guy like Kyrou and the way he uses his speed. Also his shot, and he can make plays. So I feel like that line can be a real good rush line and dangerous off the rush.”

It’s an adjustment for Schenn after playing the past several seasons with Jaden Schwartz, now a member of the expansion Seattle Kraken via free agency.

Schenn does have some familiarity with Kyrou, having played on a line with him in 21 games last year — most of which came over the first half of the season.

“Both guys are playing their ‘off’ wings right now,” Schenn said of his linemates. “It’s a little bit different. But I think both guys are so dynamic off the rush. They skate so well. They see the ice well.

“So for me, I just try to complement those guys. Obviously, all of us just try and make plays and read off one another.”

By ‘off’ wing, Schenn meant that Kyrou — a righthanded shot — is playing left wing; and Buchnevich — a lefty — is playing right wing.

If the Schenn line is a rush line; the O’Reilly line is a possession/cycling line.

“Saad, he’s the type of guy that’s been around,” Berube said. “I know he’s played a lot of hockey with (Jonathan) Toews in Chicago. Toews is similar to O’Reilly, the way they play from the defensive side of things.

“But in the offensive zone — with Perron and O’Reilly — the way they hang onto pucks and play that O-zone style of hockey, I think he fits well in there. Protecting pucks, keeping it down low. Working the boards. Working in front of the net.”

In terms of production, O’Reilly and Perron had quiet preseasons. O’Reilly didn’t have a point in four preseason contests; Perron was held off the scoresheet in his first three games, but then registered a goal and an assist in the preseason finale last Friday against Columbus.

“I didn’t really have much production in the preseason, but I think I feel good,” O’Reilly said. “I feel in shape, ready to go. I thought as each game went on, DP and myself, we were working well. We were building something. I’m really excited with our group. Personally, I’m healthy and ready to start competing.”

So you have a rush line, a cycling line. As for the third line, the hope is that it’s a scoring line. Wingers Neal and Tarasenko both are shooters and scorers — with a combined 512 goals over their careers. The man in the middle, Thomas, loves to pass. So this could be a recipe for success.

But for a variety of reasons, including injury and COVID, the goal-scoring production from Neal and Tarasenko slumped the past couple of years. As a result, this is also a mystery line for the coming season.

If Neal and Tarasenko regain even part of their past scoring touch, the Blues could have a prolific lineup. If they don’t? Then, not so prolific.

Lots of wild and crazy as Blues outscore Coyotes, 7-4

Kyrou and Kostin both score twice; Buchenvich gets ejected for head-butting

Tarasenko gets the game-winning goal as Blues head home with 3-0-0 record.

They started with three wins on the road, now come home to face Kings with Buchnevich and Saad out of the lineup.

Fans will need to show either proof of vaccination or a negative COVID test in past 72 hours; fans can check in online in advance to speed entry.

His head-butt of Arizona's Lawson Crouse will also cost him more than $141,000 in salary.

Saturday's season opener marked the first time since the 2011-12 season that the Blues began a season without Jaden Schwartz on their roster.

Perron ends up playing after 1 1/2 days of uncertainty over his availability.

For openers, Blues survived some bumpy moments against Colorado

They'll take the points, but realize they've got a lot of work to do.

Turning heads, knocking heads: A trip to remember for Neighbours and family

The teenage forward from Alberta is doing all he can to stick with the Blues.

St. Louis Blues' Robert Thomas (18) looks for a pass from Vladimir Tarasenko (91) in the first period goal against the Columbus Blue Jackets in the final preseason game at Enterprise Center on Friday, Oct. 8, 2021. Photo by Robert Cohen, rcohen@post-dispatch.com