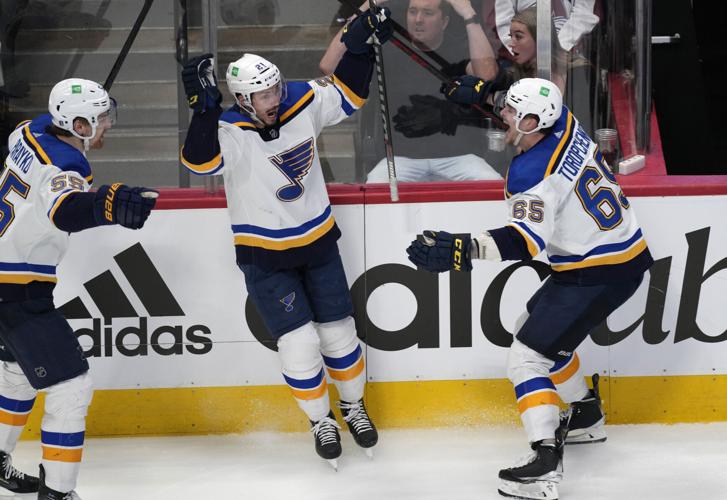 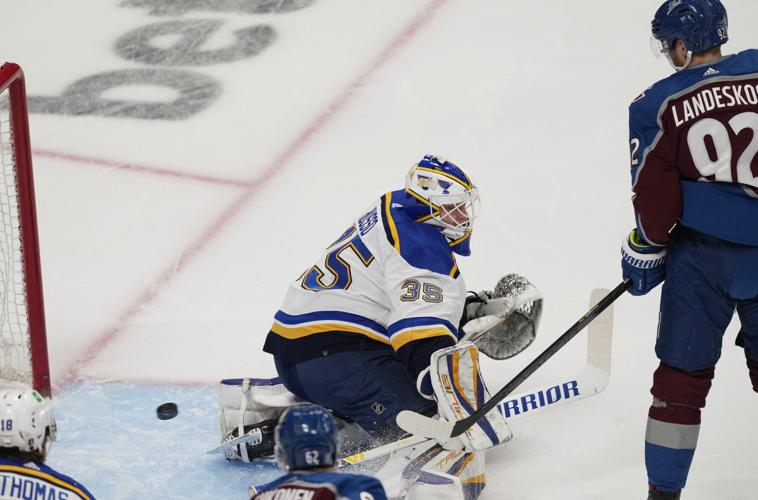 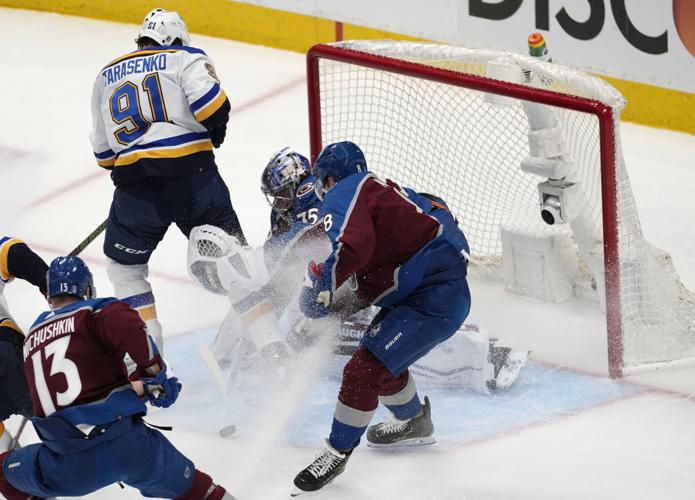 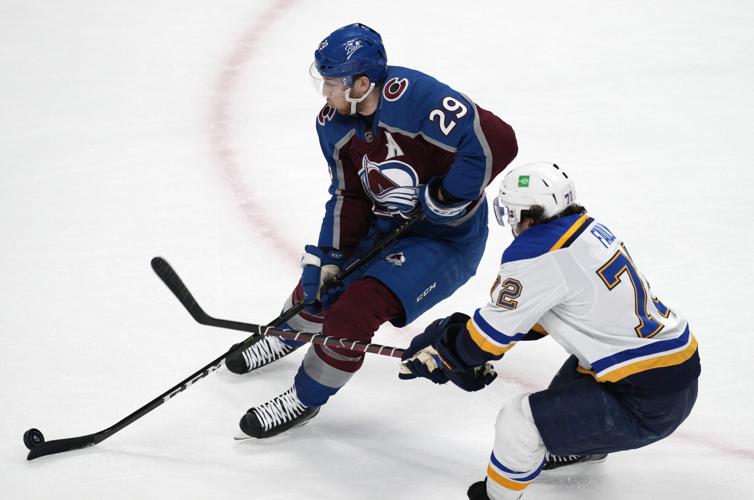 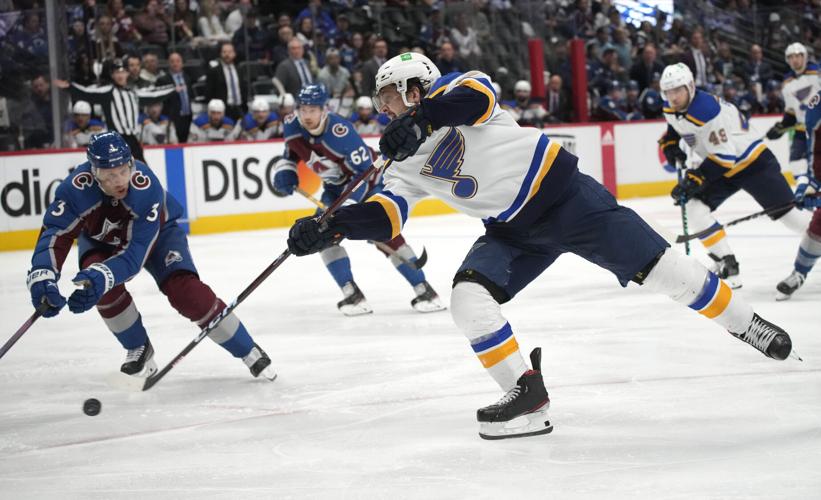 DENVER — On eight occasions this season, the Blues put together winning streaks of three games or more. They won five in a row to start the season and won nine straight in April.

Well, they need one more three-game streak to keep their season alive, and got a start in that direction Wednesday with an improbable, mind-binding 5-4 overtime victory over the Colorado Avalanche at Ball Arena. The oldest Blue, Tyler Bozak, scored the game-winner at 3:38 of overtime as St. Louis rallied from a 3-0 deficit.

In the long, colorful history of Blues hockey, it was only the fifth time they’re rallied from a three-goal deficit in the playoffs and the first time since Game 3 of the conference quarterfinals against the Los Angeles Kings in 1998.

Photos: Hold your hats! Scenes from a stunning Blues victory

Tyler Bozak scored 3:38 into overtime and the St. Louis Blues fended off elimination in Game 5, overcoming a three-goal deficit in a 5-4 victo…

The other goal, originally credited to Justin Faulk on a net-front scramble, was changed to Jordan Kyrou more than an hour after the game by the NHL. It was a big one, tying the game at 3-3 with just 4:46 left in regulation.

And so there will be hockey in St. Louis on Friday at Enterprise Center, with the Blues still down three games to two in the best-of-seven series

“It was an amazing hockey game,” Bozak said. “I'm sure everyone that was watching thought the same thing. Obviously, (Nathan) MacKinnon's one of the best players in the league and makes plays in crucial moments and did it there. But we have great leadership on our team. We have a lot of guys who have won before. We knew there was still lots of time. The guys got it done and got us to overtime and then it's anybody's game when you get there.”

St. Louis Blues fans were treated to an overtime winner at OB. Clark's in Brentwood as the Blues earned a Game 6 with a 5-4 win over the Color…

In the process, the Blues overcame a hat trick by MacKinnon, including what looked like a crushing go-ahead goal with 2:46 remaining in regulation. As hundreds of hats landed on the ice at Ball, the Blues had to regroup and regroup in a hurry.

“Yeah, it’s tough,” coach Craig Berube said. “We battle back and then we give up that goal like that. It could be really deflating, but our team has got a lot of guts and they’re a resilient bunch of guys. I thought they were positive. We talked about what we were going to do with the goalie and stuff and it ended up working out.”

In the final minute of regulation, Tarasenko ripped an in-close shot on the right side of the net that rattled off goalie Darcy Kuemper. And there was Thomas on the left side of the net to shovel the puck into the net with 56 seconds remaining to tie the game at 4-4 and send it to overtime.

It was the latest game-tying goal by a Blues player in regulation when facing playoff elimination. But there was no elimination Wednesday.

Did Thomas’ eyes get big when he saw the puck lying at his feet?

“It was just quick,” he said. “There wasn't much eye-opening. Just kind of try and whack it in. That's about it. That's all I got for you.”

Thomas had scored midway through the third period, on a pinpoint pass from Pavel Buchnevich, to make it a 3-2 game and end his postseason goal drought.

“Better late than never I guess,” said a smiling Thomas. “But I was on the receiving end on some nice plays by Buchy and Vladi. They deserve all the credit.”

But back to Bozak. You don’t see fourth lines on the ice very much in overtime. Particularly postseason OT. But there he was, sending a shot through traffic from distance that got past Kuemper and sent the crowd home in a state of shock. This was to be a night to bury the Blues, not to see them celebrating deliriously after the Bozak goal.

“Just got a little bounce up top and saw a lane to the net,” Bozak said. “In overtime, there's definitely no such thing as a bad shot, so just tried to get it through the traffic and it went in. It was awesome.”

Bozak said he couldn’t remember a bigger goal in his career.

With hundreds, maybe thousands of Colorado fans holding “Stand with Naz” signs, and booing — loudly — nearly every time David Perron touched the puck, the Blues were nearly overwhelmed by a tsunami of emotion at the start of the game.

MacKinnon scored his first goal of the series just 3:51 into the game. He added a power-play goal late in the period, and then when Gabriel Landeskog scored on a deflection four minutes into the second period, it was 3-0 Colorado, and things looked totally hopeless for the Blues.

But somehow they found a way.

“It’s just character and leadership,” Berube said. “We’ve got a lot of character in that room, we all know that. This team has come from behind quite a bit this year in games, so they don’t give up. You’ve just got to keep playing and keep battling and they did that. That’s all on them.”

Tarasenko flicked in a rebound of a blocked Leddy shot with 5:18 left in the second period, and the Blues were on the board. And that got them going. As they say in hockey, slowly but surely the ice started tilting their way.

“It's obviously a big boost and it gives you a lot of confidence to get that next goal,” Bozak said. “I thought we took over the game a little bit after that and started playing a lot more in the offensive zone and making a lot more plays. Maybe we were a little nervous earlier in the game to make mistakes. ... That kind of went away and Vladi got us going with that big goal.”

See you in St. Louis.

Photos: Hold your hats! Scenes from a stunning Blues victory

Tipsheet: Avalanche had Blues down, but couldn't knock them out

The Avalanche had Game 5 totally under control. They had the Blues on the brink of elimination. But they couldn't finish them off.

Hochman: 'That was hard on the heart.' Blues persevere in epic Game 5 overtime win

A road win for the ages as the Blues stun Colorado.

Veteran defenseman had been sidelined since Minnesota series with lower-body injury.