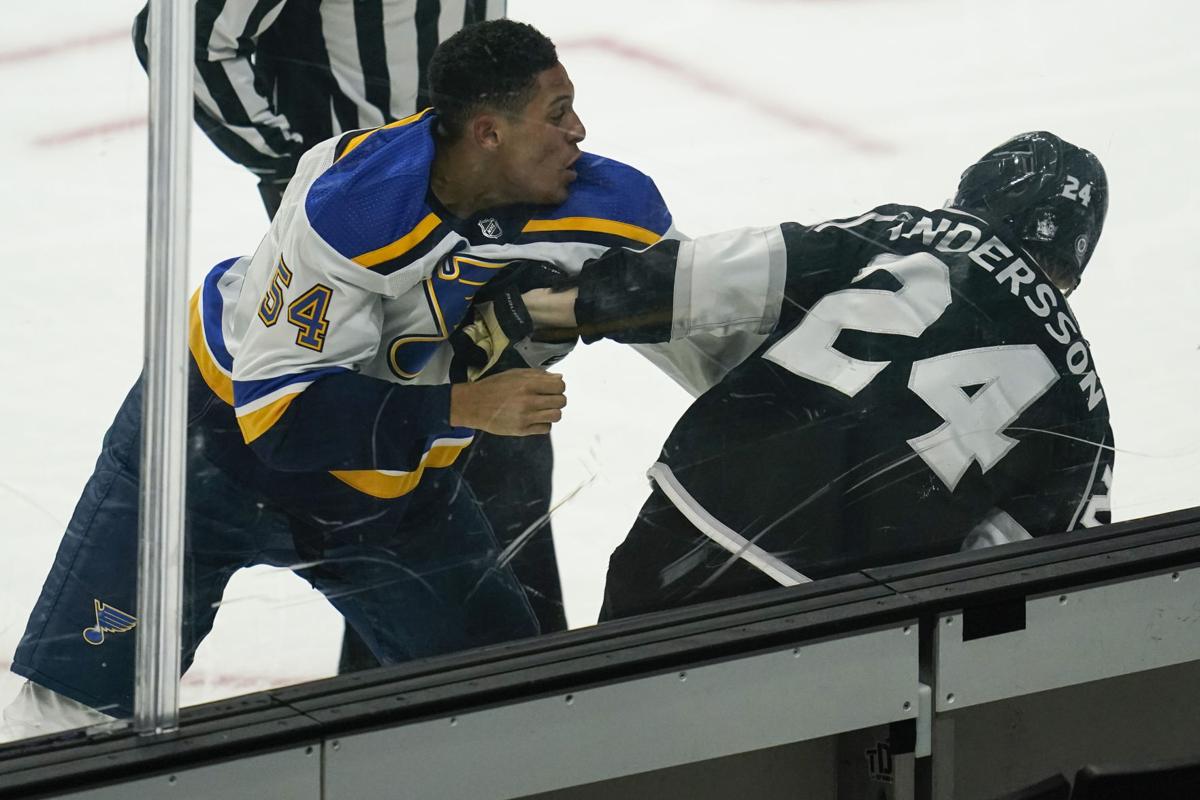 The Blues' Dakota Joshua, left, and Kings' Lias Andersson fight in the first period Monday night. Joshua is one of six Blues restricted free agents who were given qualifying offers on July 26, 2021.

Robert Thomas is one of six Blues restricted free agents who have been given qualifying offers by the team.

Monday was the last day for NHL teams to make qualifying offers to restricted free agents, and the Blues — as expected — did so for six players: forwards Ivan Barbashev, Pavel Buchnevich, Dakota Joshua, Jordan Kyrou, Zach Sanford and Robert Thomas.

By doing so, the Blues have matching rights should any of them receive offer sheets from outside teams once the free agency period starts on Wednesday. Restricted free agents almost never switch teams in the NHL, so this action by the Blues all but assures the players will be with the team next year.

Of the six, Barbashev, Buchnevich, Joshua and Sanford are arbitration eligible.

Buchnevich was acquired Friday from the New York Rangers for Sammy Blais and a second-round draft pick in 2022. The Blues would like to sign Buchnevich to a multi-year deal, but Monday’s move allows the team to retain his rights no matter what.

There were four other players eligible for restricted free agency in the organization — forwards Jacon de la Rose, Erik Foley and Evan Polei, as well as goalie Evan Fitzpatrick — and none received a qualifying offer from the team, making them unrestricted free agents.

Acquired from Winnipeg as part of the Paul Stastny trade in 2018, Foley has not played since the 2017-18 season (with Providence College) because of concussion issues.

De la Rose has signed with Farjestad BK in the Swedish Hockey League.

In another contract move, the Blues announced the signing of forward Nathan Walker to a two-year, two-way contract. Walker, who appeared in eight games for the Blues last season, had been scheduled for unrestricted free agency.

The policy takes effect Oct. 15 for events at Enterprise Center and Stifel Theatre.

Armstrong expects Tarasenko to be on Blues' opening-day roster

With trade market failing to materialize, Armstrong hopes to salvage situation, at least at the start of the season.

Oakville finally gets its Cup day, as Maroon brings it home

Two years after helping the Blues win the Stanley Cup, Pat Maroon brought the Cup to the community where he grew up and started his path in hockey.

The time has arrived for Blues' Perunovich

Back from shoulder surgery, the prized defenseman prospect is ready to get his pro career going.

Perunovich shows his stuff in long-awaited return to game action

Blues lose opener of prospects tournament, 4-3 in overtime to Toronto.

Fans have been surveyed about vaccine mandates.

Blues notebook: Prospects look sharp on all fronts in 5-2 win over Detroit

Perunovich has a goal and two assists; Ellis impressive in goal.

Tower Grove Park had a new Neighbours in August

Blues prospect came to St. Louis a month early — on his own dime — to get a head start on training camp.

Kostin tops the list and should be ready now.

The Blues' Dakota Joshua, left, and Kings' Lias Andersson fight in the first period Monday night. Joshua is one of six Blues restricted free agents who were given qualifying offers on July 26, 2021.

Robert Thomas is one of six Blues restricted free agents who have been given qualifying offers by the team.