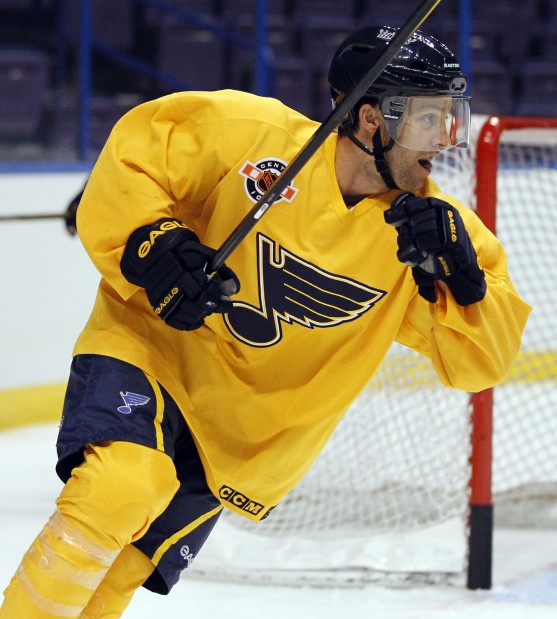 Blues forward Andy McDonald still is recovering from a concussion and did not make the team's current three-game trip. (AP Photo) Stuck in a wait-and-see mode regarding the return of several players from injuries and awaiting increased production from a few of the club's core forwards, Blues general manager Doug Armstrong vows he will be patient and perhaps make no moves leading up to the NHL trading deadline Feb. 27.

Part of that philosophy is predicated on the Blues' restrictive budget as the franchise navigates through a tumultuous ownership change. Another part of it is Armstrong's belief that replacing players who are having off years offensively might not necessarily lead to a finer finish.

The Blues are living healthy in fourth place in the Western Conference going into tonight's game in New Jersey, and despite their scoring issues, the GM says they have the makeup to be a quality club heading down the stretch.

"Our goal is to get healthy and see where we fit in," Armstrong said. "Obviously our team needs to play to the level that they're capable of playing. There are a number of players on our roster that aren't having the season that they had a year ago. But I think it's too easy for everyone involved to look for someone else to come in and fix the problem, when I think the answer is right down there (on the ice). And I'm very comfortable that they think the answer is right down there too. We need players that we know can produce offense to produce offense.

"We started the year saying that we need to find out about these players. Well, there's no better time to find out about a player than a drive into the playoffs. To bring in other players and put guys we want to find out about in different roles, then we're just pushing off the process. The season is going to end the way it's going to end. There's no guarantee that you bring in a player, and all of a sudden you're going to become the high-scoring Detroit Red Wings. Those players aren't out there. We need to see what these players can do when the game is on the line."

The Blues remain hopeful that Andy McDonald and Alex Steen — both recovering from concussions — can rejoin the lineup down the stretch, but neither traveled with the team on its three-game road trip. McDonald appears to be inching closer, but Steen's progress a month after leaving the lineup appears halted. And now the Blues are without Jason Arnott (shoulder) and possibly Matt D'Agostini (concussion symptoms).

Armstrong insists he's not relying on the return of McDonald and Steen — the Blues could be waiting "until the summer" for them, the GM said. Nor is he feeling the pressure to make a move before the deadline in anticipation of filling their key spots in the lineup.

"I think the cart got in front of the horse," Armstrong said. "When we're talking about concussions, I've always tried to tell everybody it's not a day-to-day topic, and unfortunately it became a day-to-day topic with our coach and the media. We've stopped that now.

"You're always looking to see if you can improve your team. But I like this group and I like the depth that we have here. We'll keep our ears open as we get closer to the deadline. But we're like two-thirds of the NHL, we work under a business framework and whatever deals we make have to fit into that plan."

The Blues' payroll entering the season reached $52 million and it's believed the Blues are near their budget ceiling approaching the trading deadline. A transferring of the ownership to the group led by club minority owner Tom Stillman could infuse immediate resources into the organization, but the sale is not expected to be complete until March. Armstrong declined to answer how much flexibility he would have at the deadline under the current ownership, saying, "I'm not going to discuss the internal structure of the Blues. We work under a budget."

Trade talks around the NHL have been quiet. However, Armstrong said the league's buyers have been 'starting to give the indications of what they're looking for but some of the sellers aren't there yet. I don't think anyone is at the point yet where they want to start moving players."

A club that is perhaps neither a buyer nor a seller, the Blues aren't ready to part with their forwards who are on pace for diminished offensive numbers. Chris Stewart, who had 28 goals and 25 assists in 2010-11, is on track for 16 goals and 16 assists this season. Patrik Berglund, who had 22 goals and 30 assists last season, is heading for 18 goals and 14 assists. Matt D'Agostini is 18 points off his clip from a year ago and Vladimir Sobotka is also behind last season's pace.

"You can't every time a player has a bad stretch, move them and think that's going to solve your problems because sometimes good players have bad years," Armstrong said. "To become a team, you have to go through the good and the bad times with players to gain their trust … and that's how they gain their teammates' trust, working through these things.

"I've never been a big proponent of a lot of change. If you see something that needs to be addressed, you address it. But … take Jaro (Halak) for example. At the start of the year, there was an outcry about Jaro. Well, he then ripped off (a stretch of 11-0-3). This isn't (the video game) NHL EA Sports where you just move guys back and forth and a week later you say, 'I'll take that trade back now.' You have to be patient and you have to give players the opportunity to work through tough times."

"These players are still young," he said. "I understand the patience necessary to go through it. You look around the league, my belief is the worst trade you can make is on emotion and with a short-term outlook. The best part of these guys’ careers is just beginning. We’re going to have these guys for a long time and if we want to string them up every time they go through a bad stretch, then we’re never going to be a good franchise."

Armstrong likes to look at the glass more than half full this season. The Blues have the lowest goals-against average (1.92) and allow the fewest shots per game (26.4) in the NHL. They are 14-5-7 in one-goal games. They were constructed to win close games, which is what the club would encounter should it advance to the postseason.

"It was built to be a hardworking, competitive team that has to be comfortable playing in tight games," Armstrong said. "Some of the teams that are ahead of us in the standings are playing the majority of the games and winning in shootouts. Well, that equation leaves in the playoffs. Our shootout record hasn’t been good, but if we’re fortunate enough to make the playoffs, we don’t have to worry about that. So I like the way we’re set up."

Bring your Blues and NHL questions for a live discussion with the P-D hockey writer.

D'Agostini has concussion symptoms, sat out the morning skate.

Hockey Guy: Blues are just fine on the blue line

Persistent rumor has the Blues shopping hard for defensive help as the trade deadline nears.

Drew Miller and Henrik Zetterberg scored in the third period, and the Detroit Red Wings extended their home winning streak to 18 games with a …

Blues forward Andy McDonald still is recovering from a concussion and did not make the team's current three-game trip. (AP Photo)