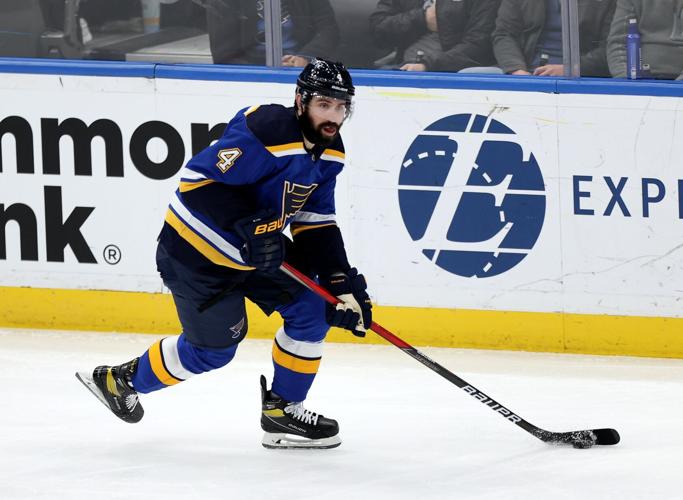 Blues defenseman Nick Leddy might be able to return Tuesday from an injury he suffered in Game 1 of the club's playoff series against the Wild. 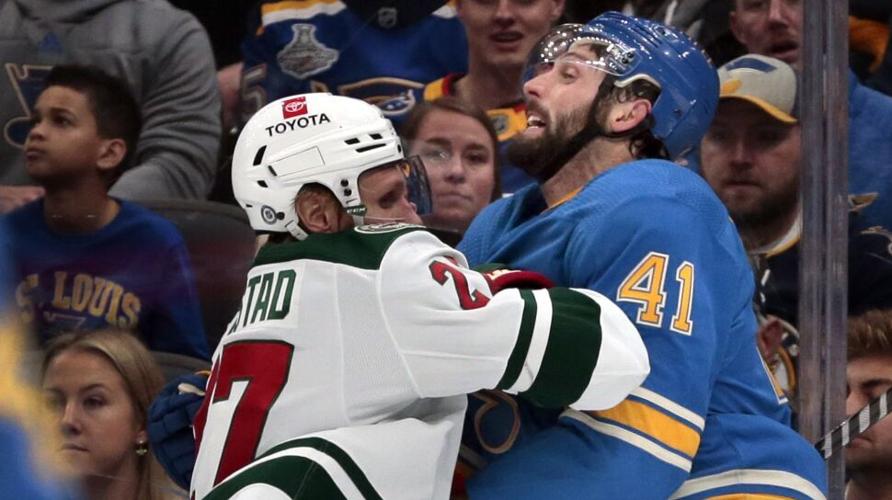 The Blues's Robert Bortuzzo is checked into the boards by Minnesota's Nick Bjugstad in the third period of a game at Enterprise Center in downtown St. Louis on Saturday, April 16, 2022. Photo by Robert Cohen, rcohen@post-dispatch.com

While the status of injured defensemen Nick Leddy and Robert Bortuzzo remains uncertain for Game 5 on Tuesday, Blues coach Craig Berube confirmed that Marco Scandella will miss the game.

Scandella was originally hurt against Colorado on April 26, the next to last game of the regular season, and missed three games, returning to action for Game 3 of the ongoing playoff series against Minnesota. He played 17:18 in that contest, of Friday, and Berube said he came through fine. But on Sunday he played a short first shift, missed his second shift, went back out for a shift that lasted just 11 seconds and then was out for almost 10 minutes before his final shift, which ended with Minnesota’s first goal. He left the game and did not return.

Berube said after Game 4 that there was a “decent chance” Leddy and/or Bortuzzo could play in Game 5, which is set for Tuesday night in St. Paul, Minn. Both were on the ice for a 30-minute optional practice on Monday at Centene Community Ice Center, while Scandella was not. Berube said he would have a better idea of their status after the skate, but there won’t be any further updates until after Tuesday’s morning skate in St. Paul. The two were full participants in the practice.

Also on the ice for practice were Alexei Toropchenko and Steven Santini, who both saw less than five minutes of ice time in Game 4, the healthy scratches from Game 4 as well as rehabbing Mackenzie MacEachern and now-backup goalie Ville Husso.

For the pregame introductions on Sunday at Enterprise Center, the biggest ovation for the Blues’ starting lineup came at the very end, when goalie Jordan Binnington was introduced.

It was, thanks to the quirks of the schedule, his first game in St. Louis in almost a month, and the crowd roared its approval. The Blues have been looking to help boost Binnington’s confidence, both for their present and future well-being, and his play on Sunday, coupled with the cheers from the fans, were just what they wanted.

“It helps for sure,” Berube said. “The crowd loves him. We all know that. He’s a special player that helped us win here. I think down the stretch him playing well and winning games, that creates confidence.”

Game 6 of the Blues-Wild series, Thursday at Enterprise Center, will be yet another 8:30 p.m. start. That makes five of the first six games of the series that have been listed as beginning at 8:30 p.m., which really is 8:45 p.m.

Until one of the Eastern series that are on the same schedule as the Blues-Wild matchup ends, the Blues are looking at being the second half of a doubleheader, and both of those series, Carolina-Boston and Toronto-Tampa Bay, are even at 2-2.

In the first four games, Minnesota made just one lineup change. Dmitry Kulikov was on defense in Game 1 and was replaced by Alex Goligoski for Game 2. The Wild lineup held fast after that, but coach Dean Evason said Monday changes could be coming.

“Every single day we go in there and the first thing on our desk, table, is lineup” he said. “That’s the first thing we talk about every day. And, yep, we just finished a couple hours ago debating that exact point. Are we going to make a decision? We’ll see. But that’s been a key for us all year is our depth, and if we were to make a decision to take somebody out and put somebody in, it wasn’t if they played bad but to that point, to get some fresh legs in.

“There’s that balance right; do you disrupt, are you pushing the panic button making a change? Are you doing it for the right reasons? We go through all of that. Hopefully (Tuesday) night we make the right decision.

“Sure it can (give you a boost). But there could be a negative impact too if you take somebody out that’s been in the battle for the last four hockey games. You can do it and then second guess. If things go good, it worked out great, we’re brilliant. And if it didn’t, then we’re not so smart.”

Going into Monday’s action, only one team, Calgary, has used the same 18 skaters in all its playoff games. Minnesota is one of six teams to make just one change. The Blues, meanwhile, have used the most players — 23 skaters and two goalies.

Hockey postseason contests could start, and last a long time, on off Broadway outlets

Tarasenko's three third-period goals give Blues a 3 games to 2 lead in the series.

The Blues are set to take on the Colorado Avalanche in the second round of the Stanley Cup Playoffs.

Blues notebook: A brief respite while waiting for Round 2

Nothing official, but Blues expect Colorado series to begin either Tuesday or Wednesday.

The Binnington revival: Could it be the dark goalie pads?

Dating back to the end of the regular season, Binnington is 6-1-0 since switching goalie pads.

Berube pushed a lot of the right buttons against Minnesota

He made some tough and unorthodox decisions in the six-game series; the Blues wouldn't be moving on to Round 2 without them.

O'Reilly, Perron and Tarasenko led the Blues' offense in series win against Minnesota.

A closer look inside the Blues-Avalanche second-round series

This will be only the third time the teams have faced off in the playoffs, with the Avalanche winning both previous meetings.

Blues’ winning combination has been 11/7

Team is 12-4-3 when using fewer than 12 forwards this season, and figures to keep runing out 11 forwards and seven defensemen against Colorado.

Blues defenseman Nick Leddy might be able to return Tuesday from an injury he suffered in Game 1 of the club's playoff series against the Wild.

The Blues's Robert Bortuzzo is checked into the boards by Minnesota's Nick Bjugstad in the third period of a game at Enterprise Center in downtown St. Louis on Saturday, April 16, 2022. Photo by Robert Cohen, rcohen@post-dispatch.com