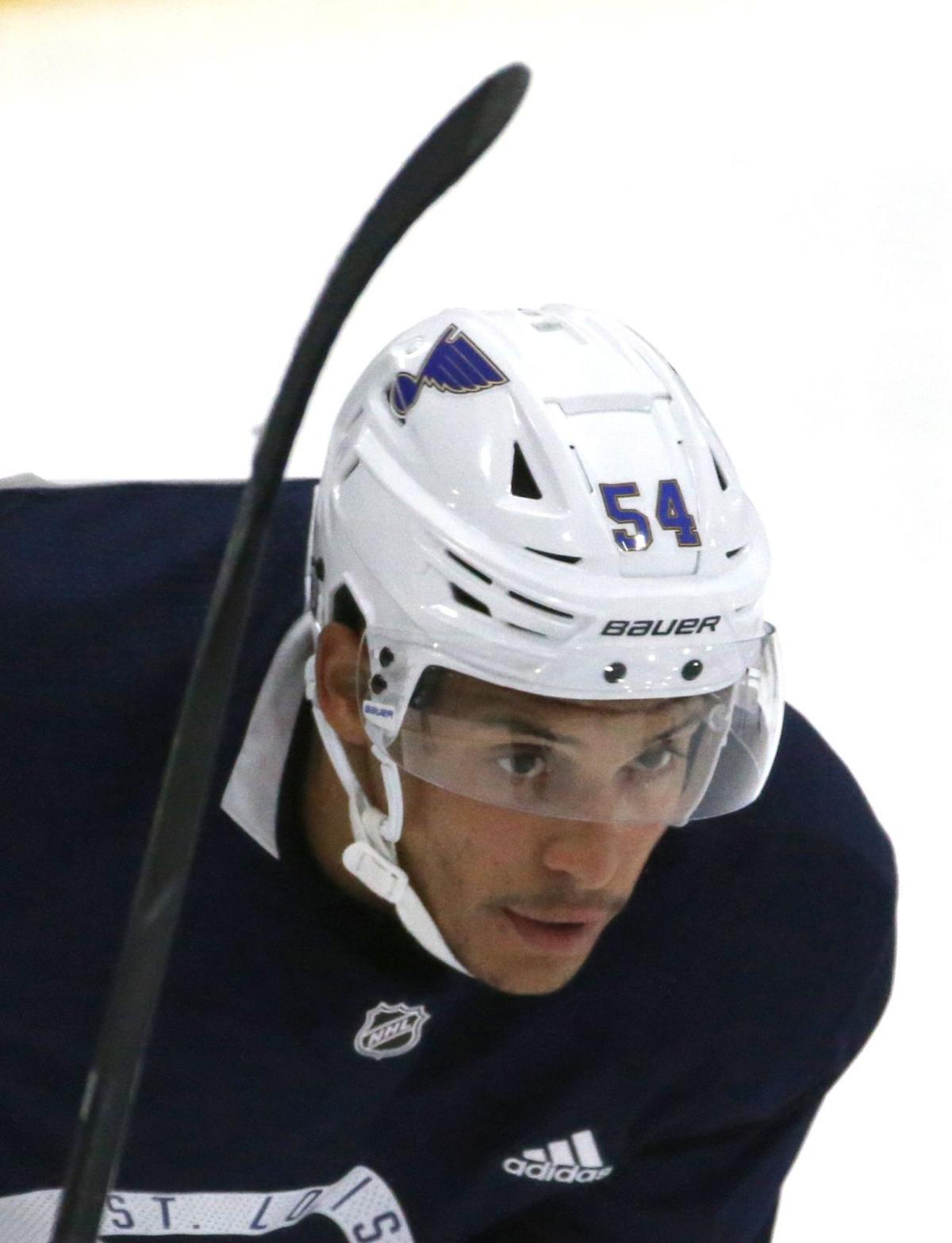 The Blues' Dakota Joshua, right, battling Vegas' Keegan Kolesar last season, is brining his grit back to the team.

As disappointed as he was to get sent down to the American Hockey League at the end of Blues training camp, Dakota Joshua was at the other end of the spectrum when he was recalled Tuesday.

“This is the place you want to be,” he said. “So anytime you get another opportunity, you got to take advantage of it and I’m really excited to hopefully get in.”

With Ryan O’Reilly and Brandon Saad going on the Blues’ COVID non-roster list, Joshua was called up from the Springfield (Mass.) Thunderbirds, the Blues’ AHL affiliate. The forward from Dearborn, Mich., arrived in St. Louis on Tuesday and took part in Wednesday’s practice at Centene Community Ice Center.

Based on Wednesday’s line rushes, Joshua will be centering the Blues’ fourth line Thursday against the visiting Colorado Avalanche.

Joshua made a strong push for a spot on the Blues’ opening-day roster with impressive play in the NHL Prospect Tournament in Traverse City, Mich., and in training camp and the preseason.

In five exhibition games, he had two assists, led the team in hits in one game, and got into a fight in another. In short, Joshua has a physical, high-energy style of play perfectly suited for a spot on fourth line of a Craig Berube-coached team. But competition was tough for roster spots, especially with the play of veteran James Neal in camp on a tryout contract. So Joshua was sent back to the AHL.

“Obviously, you’re going to be disappointed, that’s the competitor in you,” Joshua said after practice Wednesday. “But it’s a good team here as we see so far. I understand. And now here I am with another chance and an opportunity.”

Last year, Joshua was called up in the middle of a COVID-condensed season. He scored a goal in his NHL debut, March 1 against Anaheim, and ended up playing 12 games. With a rash of injuries, Joshua played center for the Blues almost out of desperation; he had been a winger previously in the AHL.

But Berube liked what he saw from Joshua at center — he was surprisingly effective on faceoffs. So Joshua was used at center in Traverse City, in Blues camp, and during his five-game stint this season in Springfield.

Joshua hasn’t been gone that long — training camp ended less than three weeks ago — so it’s not like the Blues’ systems are new to him.

“They play pretty close to the same thing down there (in Springfield),” Berube said. “But we’ll go over some things with him. There’s not a lot to tell him. He just needs to go and play the way he played before he left.”

Progress for SundqvistBerube still doesn’t have a timetable for Oskar Sundqvist’s return as he completes his recovery/rehab from knee surgery last spring.

But Wednesday marked a small step in the right direction, with Sundqvist getting work on the penalty-killing unit during practice.

“Yeah, I mean every day it’s him skating and doing more and more,” Berube said. “He’s doing some contact now, which is good. We’re just going to keep pounding away at it.

“I don’t have an answer for you guys when he’s going to be back, but again, he’s doing more. ... He’s feeling better. He’s doing his work in the weight room and he’s a lot stronger than he was. There’s a lot of positive (things) and it’s just about him feeling when he’s ready to roll and he gets the clearance to play and we’ll go from there.”

Aucoin honoredKeith Aucoin, who played two games for the Blues in 2013-14 but spent most of that season with their AHL affiliate, the Chicago Wolves, has been selected for induction to the AHL Hall of Fame.

Aucoin played 17 seasons of professional hockey but appeared in only 145 NHL games, spending the bulk of his career in the AHL, with 857 points in 769 games. He retired as the seventh-leading scorer in AHL history.

Others selected to the Hall were Nolan Baumgartner, Dave Creighton and Bill Torrey.

Tom Timmermann of the Post-Dispatch contributed to this story.

The Blues' Dakota Joshua, right, battling Vegas' Keegan Kolesar last season, is brining his grit back to the team.