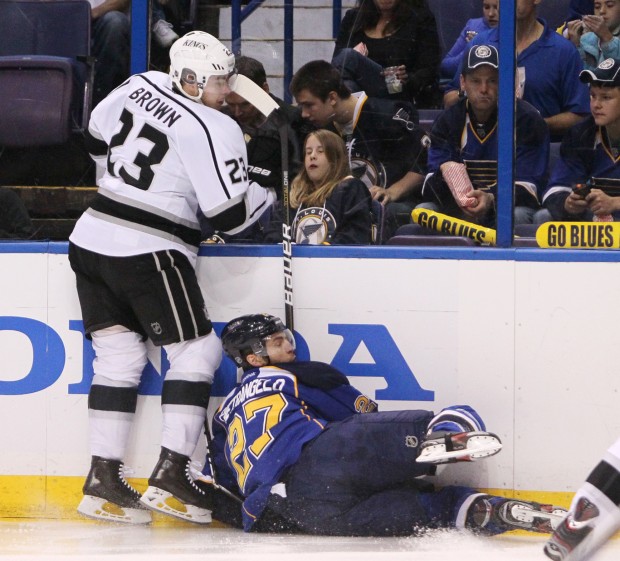 Blues defenseman Alex Pietrangelo (right) who was injured in Game 1 of the second-round series against the Kings, will make his return tonight in Game 3. (Photo by Chris Lee, clee@post-dispatch.com) 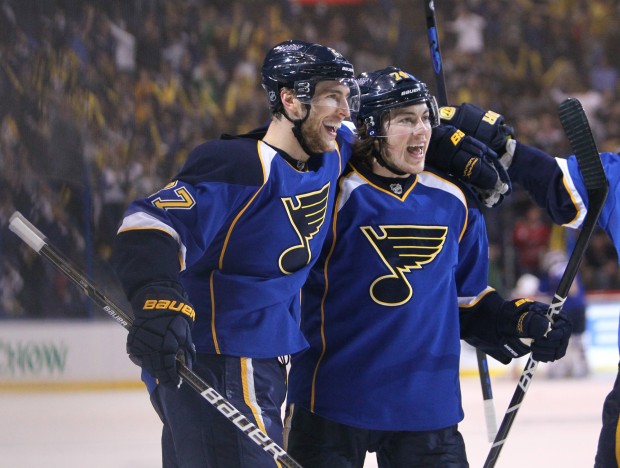 Alex Pietrangelo is shown, left, in a playoff game against the Los Angeles Kings in 2012. Photo by Chris Lee, clee@post-dispatch.com

Win or lose, Blues coach Ken Hitchcock says game-to-game adjustments are part of the playoffs. But after a 3-1 defeat to Los Angeles in Game 1 of the Western Conference semifinals, adjusting to the possible loss of the team's No. 1 defenseman and ice-time leader was not part of the postseason plan.

Alex Pietrangelo, who was injured in the second period of Saturday's game, did not practice Sunday and is questionable for Game 2 tonight at Scottrade Center.

Following a hit by LA's Dwight King, pushing Pietrangelo into the boards head-first, the defenseman played one more shift before leaving the game with what the club describes as an upper-body injury. Pietrangelo was evaluated for a concussion, but those results and whether he's experiencing symptoms are not known.

The NHL reviewed the hit by King but since the league did not make an announcement Sunday regarding a suspension, it doesn't appear that one is likely.

"I talked to him and he seemed to be in quite a bit of pain," Colaiacovo said. "Hopefully, he woke up ... and felt a lot better. Hopefully, he's good enough to go. If it happens, great; we obviously need him in our lineup."

Hitchcock warned, "Just don't be writing him off yet," but the Blues were making plans Sunday to replace Pietrangelo in the lineup for Game 2. Those will be big minutes to fill, as he was averaging a team-high 26 minutes, 15 seconds of ice time in the playoffs.

Ian Cole, who hasn't played in the Blues' last 13 games, including six in the playoffs, practiced with Colaiacovo on Sunday and will be in uniform tonight if Pietrangelo doesn't play. Cole is a lefthanded shooting defenseman, but he would play on the right side while paired with Colaiacovo.

"We just think Cole has gotten really better in the last month since he's been practicing," Hitchcock said. "He's also a guy that can play the right side, plays it well. So we've had him practice over there a lot, and he's looked very good ... actually, he's looked better on the right sometimes than the left, so that's good for us. It's just an easy switch. (Cole and Colaiacovo) practiced together when Carlo was coming back from injury. They practiced together and they looked good as a tandem."

Hitchcock also said that the Blues could decide to dress seven defensemen, suiting up Cole and Kent Huskins. Pietrangelo averaged 3:19 of ice time on the penalty kill in the playoffs, second on the team, and Huskins could help in that department.

"Whether we go to seven (defensemen) and 11 (forwards) or not, we'll see," Hitchcock said. "One of the things, if Petro doesn't play, we've got to look at the penalty-kill minutes. Husky is really good at killing PK. So, whether we do seven and 11, or six and 12, we've got to decide that here in the next 24 hours or so."

Over the last 24 hours, Blues fans have been waiting to hear whether King would face a suspension. Players again questioned the hit Sunday but said they would be ready to move on if the NHL decided against supplemental discipline.

"You're hoping there's no intent there, but when it's third-line guys finishing our best defenseman ... we'll see what happens," Blues captain David Backes said. "Hopefully, there's a respect factor that needs to return to the game from all aspects. I think if that's back, our game's going to be better than it ever has been."

After acknowledging Saturday that the hit was worth only a two-minute penalty, LA coach Darryl Sutter didn't think much of it the next day either.

"I watched it and I care about that stuff," Sutter said. "It's as much as Pietrangelo's own (momentum), whatever you want to call it ... him going that way. It's not even a hit. It's an arm. It's not a player that does that. And that's all that is. It depends which side you're on, and I'm in the middle. It's a tough game, right? That's a fact. If you guys want to take hitting out, then we'll see how exciting it is."

When asked if he thought the hit warranted a suspension, Hitchcock replied: "Why don't we leave that for the league? I'm more worried about Petro and our group. Everybody has made their comments. We've all seen the written stuff. Let's just let (the NHL) comment. Let's move on to Game 2."

A Blues game that for only the second time in 89 nights this season could be without Pietrangelo in the lineup.

"He means a lot to our team," Colaiacovo said. "He plays a lot of minutes, he plays in a lot of situations. He's a guy who can be a game-changer. (But) if he's out, we can't just fold up tent and say it's over. We'll miss him, but we've got to find ways to fill his void."

Bernie Bytes: Petro return would be a triumph

If Pietrangelo plays tonight, the Kings will have failed in the attempt to rub him out.

Hitchcock tinkers with his offense

Coach looks for ways to reignite fire Blues had vs. San Jose.

The Blues were unable to maintain aggressiveness and have only themselves to blame for losing.

Pietrangelo is irreplaceable. He is reliable defensively and an offensive catalyst.

Blues Talk: Sound off about the Kings series

GLENDALE, ARIZ. • Shane Doan, Radim Vrbata and Antoine Vermette each had a goal and an assist, and the Phoenix Coyotes avoided their usual ove…

Blues defenseman Alex Pietrangelo (right) who was injured in Game 1 of the second-round series against the Kings, will make his return tonight in Game 3. (Photo by Chris Lee, clee@post-dispatch.com)

Alex Pietrangelo is shown, left, in a playoff game against the Los Angeles Kings in 2012. Photo by Chris Lee, clee@post-dispatch.com