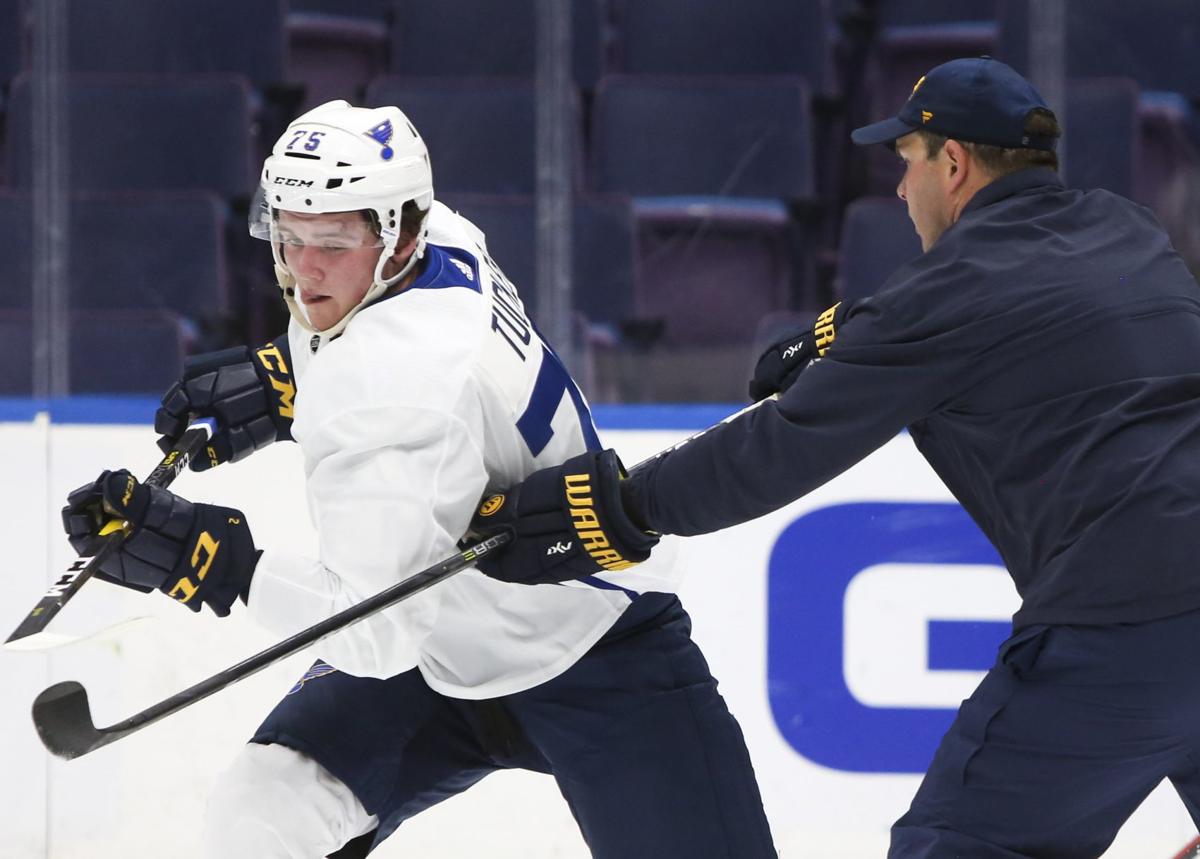 Blues prospect Tyler Tucker (75) handles the puck during drills on Tuesday, June 25, 2019 at the Blues Prospect Camp in the Enterprise Center. Photo by Colter Peterson, cpeterson@post-dispatch.com 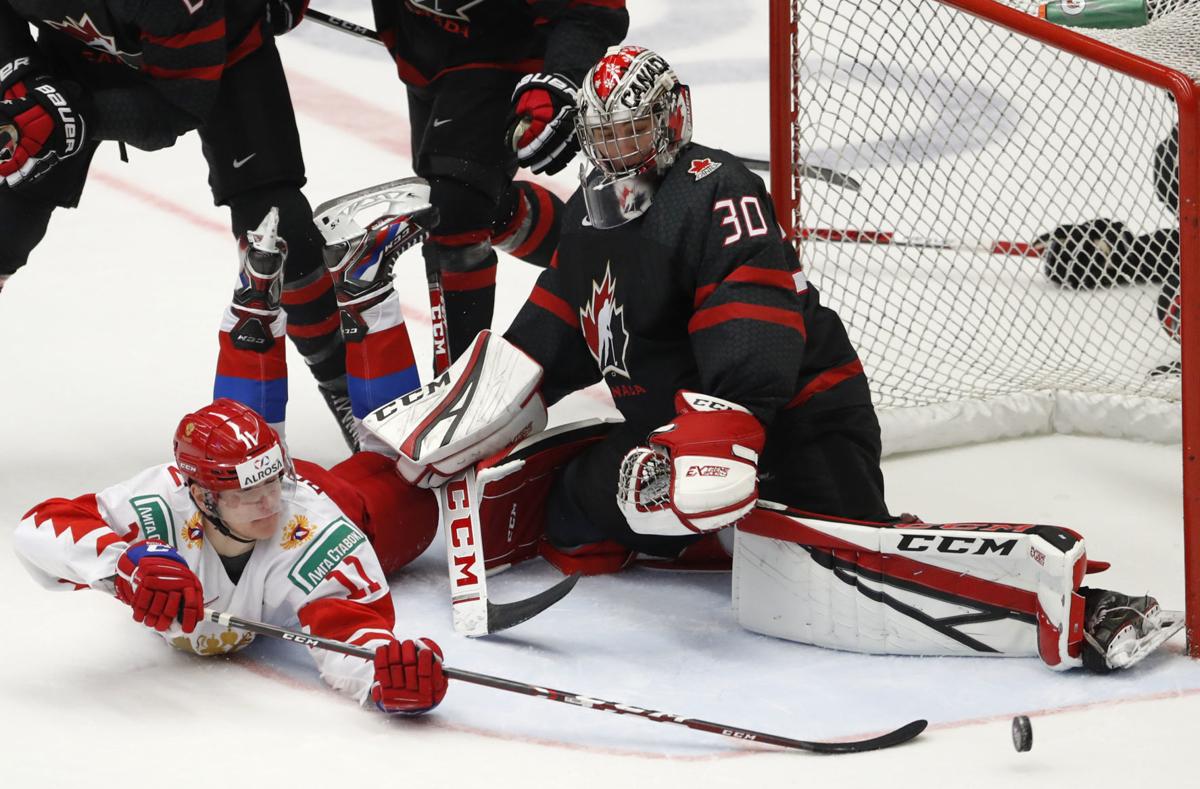 When the Blues drafted Tyler Tucker in 2018, the defenseman from Longlac, Ontario, had scored a not-so-grand total of four goals in two seasons of junior play in the Ontario Hockey League.

Then came the offense.

In just 55 games this season before the coronavirus pandemic suspended play, he had 17 goals and 39 assists, splitting his time between Barrie and the Flint Firebirds. His 17 goals was eighth-best among defensemen in the 20-team OHL; and his 39 assists tied for eighth.

Not bad at all for someone selected in the seventh round, No. 200 overall, in the NHL draft.

“He had a really good season,” said Bill Armstrong, the Blues’ assistant general manager and director of amateur scouting. “He was just OK in Traverse City (at the NHL prospects tournament).

“He went back to junior and really got focused on getting in shape and kind of changing his game a little bit. I think he did great job of that, of rebounding and having a really great year. Enough to put him on the table for us to sign. And that’s all credit to him.”

The Blues signed Tucker to a three-year entry-level contract on March 1, his 20th birthday.

“He’s a competitive kid,” said Armstrong, no relation to Blues GM Doug Armstrong. “And that’s what you love about him. He’s got an unpredictability about his toughness. Guys are always leery of him because he can hit and he can fight.”

Firebirds coach Eric Wellwood, who once played for Craig Berube in Philadelphia and whose Flyers roommate was Brayden Schenn, said Tucker needs to work on his conditioning and his skating to become an NHL player.

“Everybody says that he’s gotta get in shape,” Wellwood said. “He’s in good enough shape for the OHL, but at the NHL level those guys are machines. So he’s gotta get to that level. And same thing with everybody, gotta get better at skating. If he can work on those two things I think he’ll have a chance.”

In one of the peculiarities of junior hockey, players can get traded. As teenagers. Tucker was traded from Barrie to Flint on Jan. 7 just before the OHL trade deadline. He fit right in. After scoring eight goals with 21 assists in 28 games with Barrie, he had nine goals and 18 assists in 27 games for Flint.

About five weeks into his time with Flint, Barrie had a franchise record seven points (two goals, five assists) in a 12-7 victory over the Sarnia Sting.

“It’s not like it was a fluke that he’s getting these points,” Wellwood said. “He has an extremely hard shot. He’s very intelligent with making plays, too.”

But the thing Wellwood liked most about Tucker was his grittiness.

“If there’s a scrum in front of the net and he’s the guy patrolling, everybody lets him be,” Wellwood said, chuckling. “Everybody backs off. He’s got that element to him, that old school type of hockey to him that you don’t see that often any more in players.”

The three major junior leagues in North American — the OHL, Western Hockey League and the Quebec Major Junior Hockey League — officially shut down on Monday as a result of the coronavirus.

Tucker was among seven Blues prospects playing junior hockey this season. Here’s a snapshot on how the other six fared:

Joel Hofer, goalie: After starring for Team Canada’s gold medal-winning team in the World Junior Championship, Dec. 26-Jan. 5, Hofer’s numbers dipped when he returned to the Portland Winterhawks of the WHL. But he still finished with a 2.49 goals-against average, a save percentage of .915 and tied for first in victories (34) in the 22-team WHL.

The Winterhawks had the best record in the WHL (45-11-7), but they were an offensive-minded squad that gave up a lot of chances on the other end. With the Team Canada play plus 47 starts for Portland, Hofer got worn down as the season progressed.

Nikita Alexandrov, forward: Alexandrov had two goals and six assists for silver-medalist Russia in the World Juniors, scoring one of those goals against Hofer in the championship game. Playing for the Charlottetown Islanders in the QMJHL, Alexandrov had 23 goals and 31 assists in 42 games.

His production for Charlottetown slipped post-World Juniors, but mainly because the Islanders traded away several players before the deadline.

Armstrong said Alexandrov has a knack for being in the right spot at the right time, plays big in the big games, and has the ability to complement skilled, top-end players.

Colten Ellis, goalie: Drafted one year after Hofer, in 2019, Ellis missed 2 ½ months following surgery for an undisclosed injury. He finished with an 18-7-3 record, a 2.41 goals-against average and a .904 save percentage for Rimouski Oceanic in the QMJHL.

Mathias Laferriere, forward: Another player who was on the Team Canada junior radar at the start of the season, Laferrierre suffered a dislocated shoulder on the first shift of his first game with the Cape Breton Eagles of the QMJHL and missed more than a month.

Keean Washkurak, forward: Yet another prospect who missed time with an injury, Washkurak suffered a broken hand in a fight, according to Armstrong. (Yes, he’s a feisty one.) He finished with 22 goals and 30 assists in 49 games playing for the Mississauga Steelheads in the OHL.

He had two goals and four assists in a Feb. 2 game against Sudbury.

Jeremy Michel, forward: By the numbers, Michel didn’t really progress with 42 points in both the 2018-19 and 2019-20 seasons for the Val d’Or Foreurs of the Quebec League. (Foreurs is French for drillers, or drill workers.)

“He made a little bit of progress,” Armstrong said. “But he probably wants more and we would. … He likes to get into those soft areas and shoot the puck.”

Young forward will be able to return to Blues when 2020-21 season begins.

Bill Armstrong getting down to business as GM in Arizona

Former Blues exec says: 'I didn’t come all the way to the desert to get a tan. I came here to win a championship.'

Montgomery thankful that Blues are giving him a second chance

Fired by Dallas as its head coach because of a drinking problem, he's back in the NHL as an assistant with the Blues and living a sober life.

Jim Montgomery was dismissed last December for what he said was a drinking problem. Now he's sober and 'very thankful for what happened.'

Bill Armstrong oversaw draft for the Blues. Also: GM Doug Armstrong says Tarasenko is 'on the road to recovery' after shoulder surgery.

Blues prospect Tyler Tucker (75) handles the puck during drills on Tuesday, June 25, 2019 at the Blues Prospect Camp in the Enterprise Center. Photo by Colter Peterson, cpeterson@post-dispatch.com