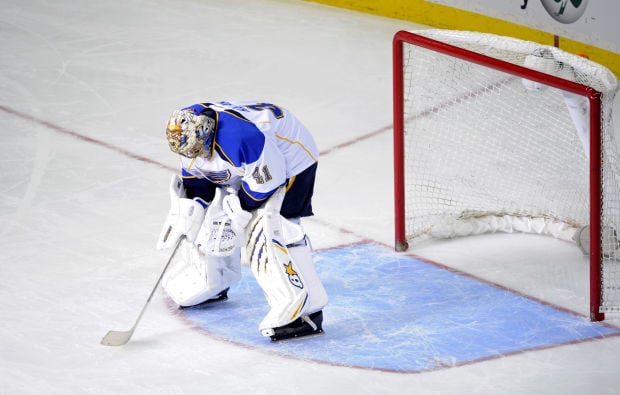 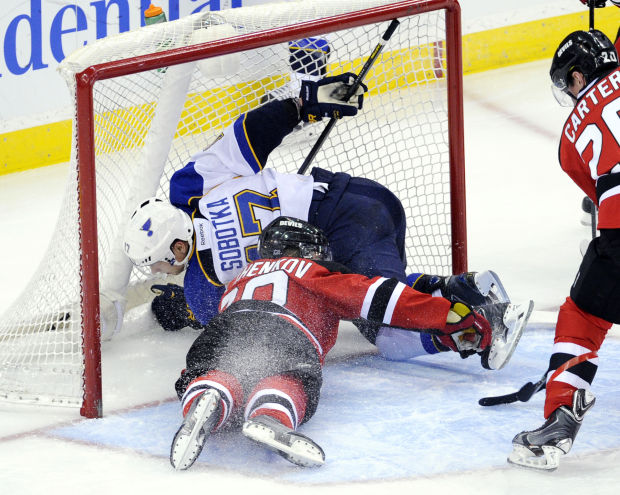 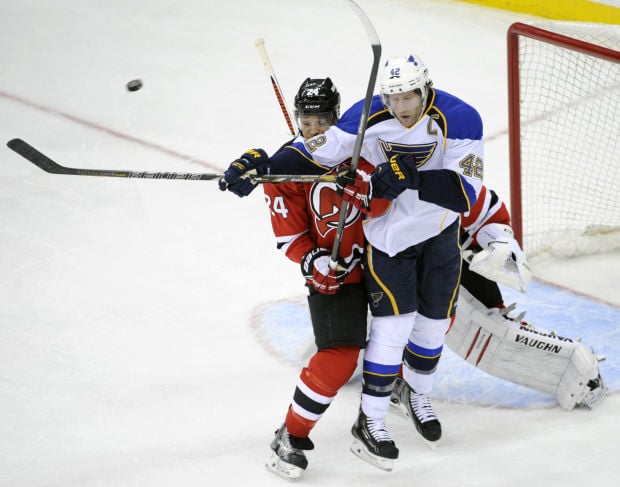 NEWARK, N.J. • The Blues would have been better off if the snowstorm that belted the East Coast on Tuesday postponed their game against New Jersey.

The Blues were belted 7-1 by the Devils at Prudential Center, where an intimate crowd of 2,000 braved weather advisories that cancelled another NHL game in the region.

Only if Blues’ fans would have had a similar advisory. One night after a rejuvenating win over Detroit, the team was manhandled by New Jersey, which came into the game in sixth place in the Metropolitan Division and ranked 27th in the NHL in goals per game.

“We were poor right across the board,” Blues coach Ken Hitchcock said during a postgame news conference that lasted 30 seconds. “Poor with our discipline. Our top players took poor penalties, poor in every aspect of our game.

“It’s disappointing. We’re going to have to regroup. This is on everybody. It’s on me, it’s on the players ... it’s a total team loss. It’s just disappointing to put in an effort like (Monday) and to come back and play like we did today.”

Perhaps Blues’ fans had been warned. Despite the victory over Detroit, the Blues lost in regulation for the fourth time in their last six games, after dropping just seven games in regulation during the team’s first 42 games.

Poor results are becoming the rule lately rather than the exception.

“It’s gut-check time,” Blues forward Chris Stewart said. “You can sit here and make excuses, but ... myself included ... the effort tonight was borderline

The Blues arrived at Prudential

Center in their snow boots and apparently never took them off.

New Jersey became just the third Eastern Conference club to knock off the Blues in regulation in 18 games this season.

The Devils, who average 2.43 goals a game, did it by smacking the Blues with a season-high seven goals. They chased starting goalie Brian Elliott from the game in the first period after he allowed three goals on nine shots.

In came Jaroslav Halak, who surrendered four more goals, and the combined seven against was the most the Blues had given up this season. San Jose twice netted a six-pack against them this season.

New Jersey scored on two of its first three shots in the game, opening a 2-0 lead just 2 minutes, 51 seconds into the matchup.

Mark Fayne pumped in a wrist shot for the Devils, a shot that may have grazed off the Blues’ Jaden Schwartz before flipping past the glove of Elliott. Just 24 seconds later, Ryan Carter slid a backhanded shot behind Elliott, a goal that came with the fourth lines on the ice for both teams.

“They just outplayed us from the get-go,” Blues forward Alexander Steen said. “We weren’t very sharp from the get-go. They jumped on us, we took some bad penalties and they made us pay.”

Another sluggish start was under way for the Blues, but before the rout was on, Steen put the club on the scoreboard with his career-high 25th goal of the season.

Schwartz made a nifty pass to Steen, who had his first shot knocked down by New Jersey’s Andy Greene. But Steen gathered the rebound and buried the puck behind Devils goalie Cory Schneider, who got the nod over Martin Brodeur.

But the momentum was very short-lived. Very.

Less than two minutes later, New Jersey’s Jaromir Jagr netted his 16th goal of the season. A centering feed from teammate Reid Boucher went in off the left skate of Jagr, but after a video review, it was determined that no kicking motion was involved.

“I mean, we knew they were going to come hard,” Elliott said. “That’s what they do. They’ve got big bodies. Come in and crash the net. Obviously you do that, you create your own breaks.”

The goal was No. 697 in the distinguished career of Jagr, who recently passed Mark Messier for No. 7 on the league’s all-time scoring list.

The Blues were down 3-1, and with 7:43 left in the first period, Halak was sent in for Elliott, who has now lost three consecutive starts and allowed eight goals on 52 shots in that stretch.

New Jersey had the only two goals of the second period, one on a power play by Adam Henrique. Three of the Devils’ final four goals Tuesday came with the man-advantage. Two came with Steen in the penalty box and one with defenseman Barret Jackman paying his dues.

The last goal of the game epitomized the night for the Blues.

Eric Gelinas wound up from the red line, and with a slap shot that caught a piece of defenseman Alex Pietrangelo on the way, scored on a 78-footer. Halak blocked the shot, but it popped over him and into the back of the net.

“I saw the puck,” Halak said. “I knew the guy was going to dump it in the corner. He shot it and unfortunately it went off Petro’s pants. I tried to get in front of the puck, but it hit my stick and went over me. It just went in. It was just one of those nights.”

A night the Blues want to quickly forget.

Elliott, Halak have a rough night in goal

The goalies combined to allow seven goals on 23 shots against.

On this episode, Bernie Miklasz discusses the frustrating Blues and the struggling Mizzou basketball team.