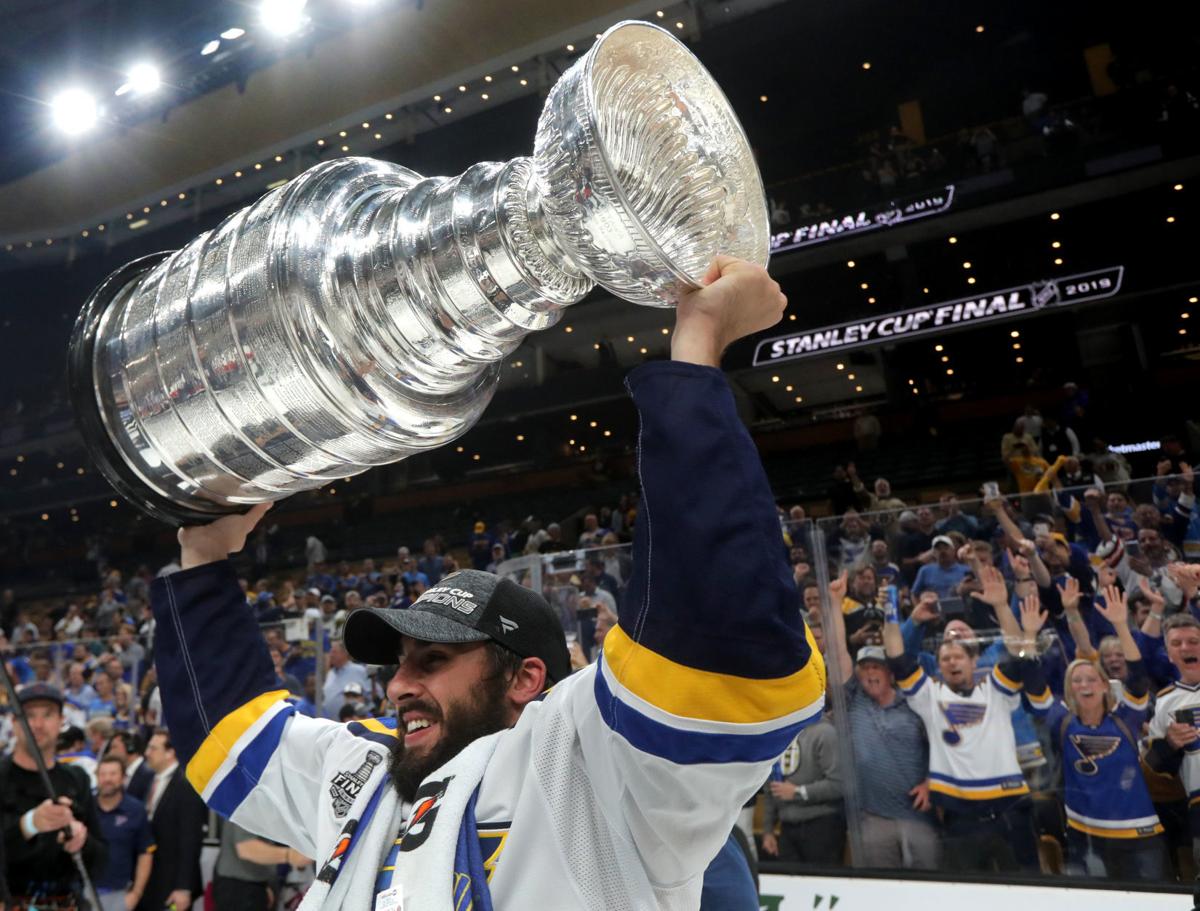 St. Louis Blues center Robby Fabbri (15) skates near the fans with the Stanley Cup after the Blues beat the Boston Bruins in Game 7 of the Stanley Cup Final on Wednesday, June 12, 2019, at the TD Garden in Boston. Photo by Laurie Skrivan, lskrivan@post-dispatch.com 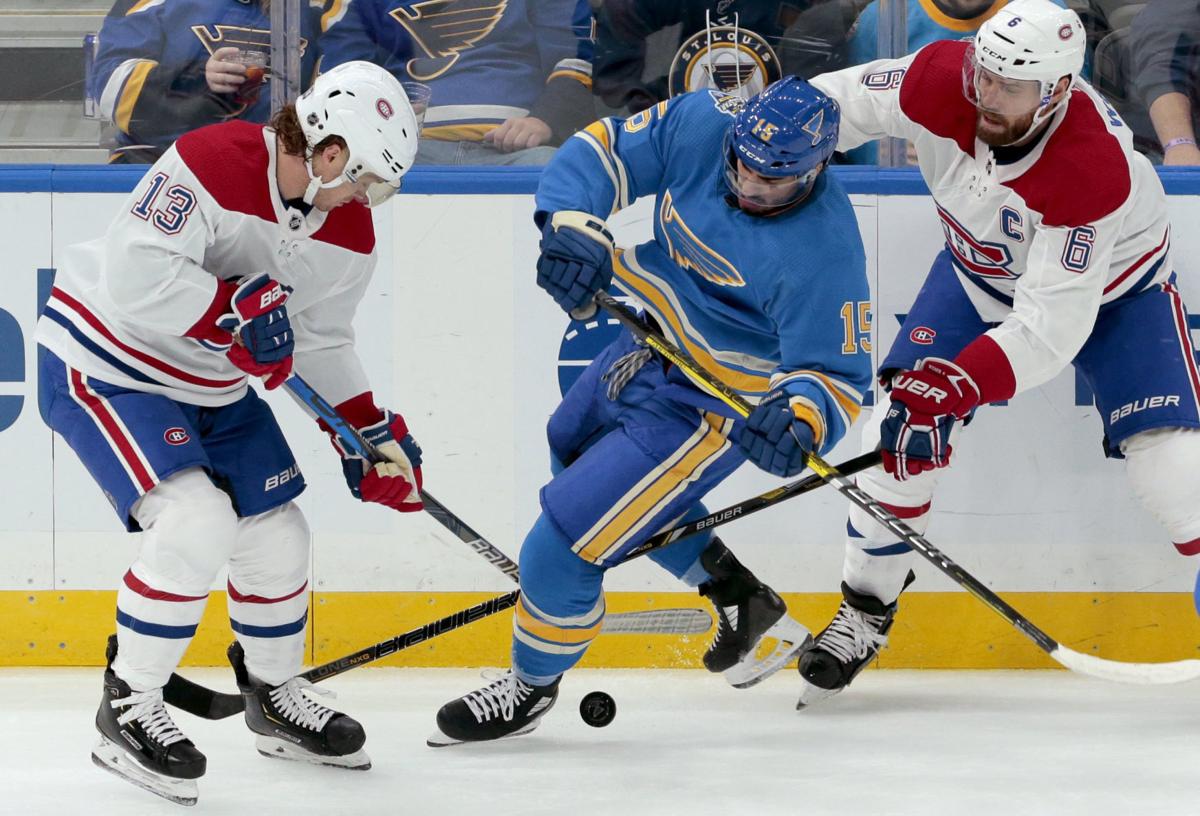 EDMONTON, Alberta — Robby Fabbri began the night in the press box at Rogers Place as a Blues healthy scratch for the fifth game in a row, and the eighth time in 17 games this season. He ended Wednesday night as a Detroit Red Wing.

Blues general manager Doug Armstrong informed Fabbri he had been traded to the Red Wings for forward Jacob de la Rose after the Blues’ 5-2 victory over the Edmonton Oilers.

Armstrong told the Post-Dispatch that Fabbri had requested a trade last summer.

“I asked him to be patient, and then he and I talked before this last road trip and we said if things don’t change I’ll certainly look to see what I can do,” Armstrong said. “Our team was playing good and he wasn’t getting on (the ice). So I tried to help him out and we were able to find a good situation with Detroit. It took a little while to get it done but I’m really happy for Robby because it gives him a great opportunity.”

At this stage of his career, Fabbri, 23, needs playing time. With the emergence of Sammy Blais in training camp and the preseason, and the work of Mackenzie MacEachern on the fourth line, there was little to no room for Fabbri in terms of playing time.

That became especially clear once Vladimir Tarasenko was lost for at least five months because of a shoulder surgery, and Fabbri still couldn’t crack the lineup.

“He missed like a half year, then a full year,” Armstrong said, referring to knee injuries that required surgery. “Then he came back (last season) and he played 30 games. He needs to play. He’s at that point. He’s done unbelievable work in his rehab. But our team’s been functioning well and (coach) Craig (Berube) goes with the group that’s had success. It’s difficult for people to get in there and he fell into that group. But I understand that.”

Fabbri appeared in nine games with the Blues this season, with one goal (scored Oct. 17 against Vancouver) and no assists. Averaging 9 minutes, 42 seconds of ice time per game, Fabbri was minus-4, second-worst on the team ahead of Justin Faulk’s minus-5.

“I’m a big Robby Fabbri fan and I told him that,” Armstrong said. “I really wish him well. We have a lot of players, so for Robby to get this opportunity it’s going to be very good. When he came here as a 19-year-old, we went to the (Stanley Cup) semifinals. Then we won the championship with him. So all my memories with Robby Fabbri are really positive and I wish him nothing but the best.”

Fabbri scored 18 goals as a rookie during the 2015-16 season and was on a similar pace the following season, with 11 goals and 18 assists through 51 games before suffering his initial knee injury. But the first-round draft pick in 2014 out of Mississauga, Ontario, never regained his productivity after a second knee surgery. He had two goals and four assists in 32 games last season.

“I wish him all the best,” Berube said. “He’s a great kid and a hard-working guy. You know, he fell upon some injuries and stuff around here.”

De la Rose, 24, originally was a second-round pick by the Montreal Canadiens in 2013. He has appeared in 16 games this season for Detroit with one goal and three assists, and was plus-3. The native of Arvika, Sweden, had his most productive year in 2017-18 with four goals and eight assists in 55 games for Montreal.

Salary cap-wise, it’s basically a push between the two forwards. Fabbri and de la Rose both count $900,000 against the cap this season. Both are restricted free agents after this season; de la Rose is arbitration eligible, Fabbri is not.

Don’t look now, but Jordan Binnington is approaching the level of play that he achieved in the 2018-19 regular season, when he led the NHL in goals-against average (1.89) and finished tied for fourth in save percentage (.927).

Binnington had the night off Wednesday, but over his past seven starts this season he’s 6-1 with a 1.99 goals-against average and a .933 save percentage.

Not that Berube is the superstitious type — OK, actually he is. The fourth line of Mackenzie MacEachern-Ivan Barbashev-Oskar Sundqvist started for the Blues for the sixth game in a row Wednesday. During the Blues’ winning streak, Berube has sent them out first each game.

• It’s on to Calgary as the Blues continue one of their longest trips of the year. Thursday is a travel day, Friday a practice day and the game against the Flames doesn’t take place until Saturday.

Young got his Lix in with the Blues

Walman, 24, is among the team's leading defenseman prospects along with Niko Mikkola and Scott Perunovich.

Ryan Podell, most recently with the Indianapolis Colts of the NFL, replaces Eric Renaghan.

Jersey will be worn at several game during 2020-21 season.

St. Louis Blues center Robby Fabbri (15) skates near the fans with the Stanley Cup after the Blues beat the Boston Bruins in Game 7 of the Stanley Cup Final on Wednesday, June 12, 2019, at the TD Garden in Boston. Photo by Laurie Skrivan, lskrivan@post-dispatch.com