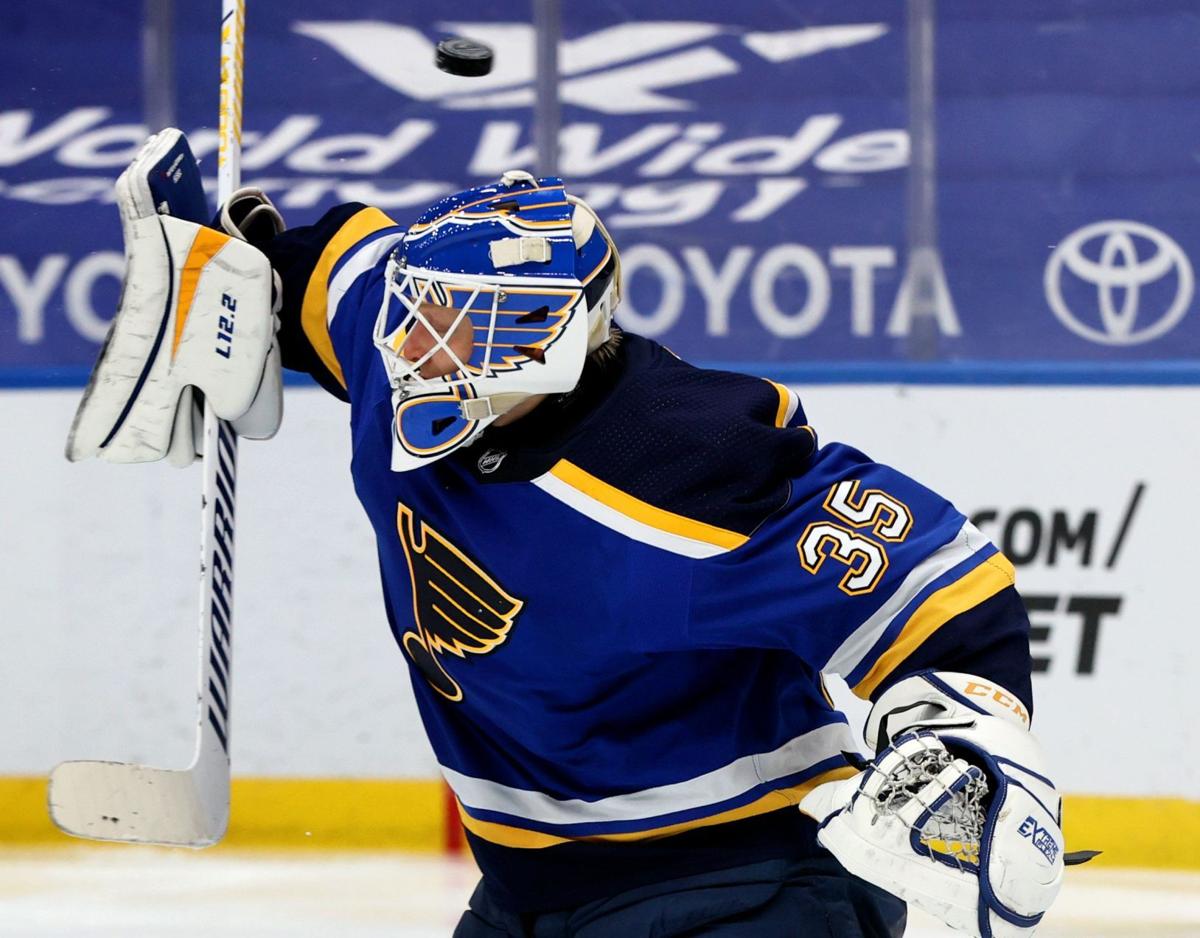 Blues goalie Ville Husso deflects a shot on Wednesday, May 12, 2021, in the second period of a game at Enterprise Center in St. Louis, Mo. Photo by Christian Gooden, cgooden@post-dispatch.com 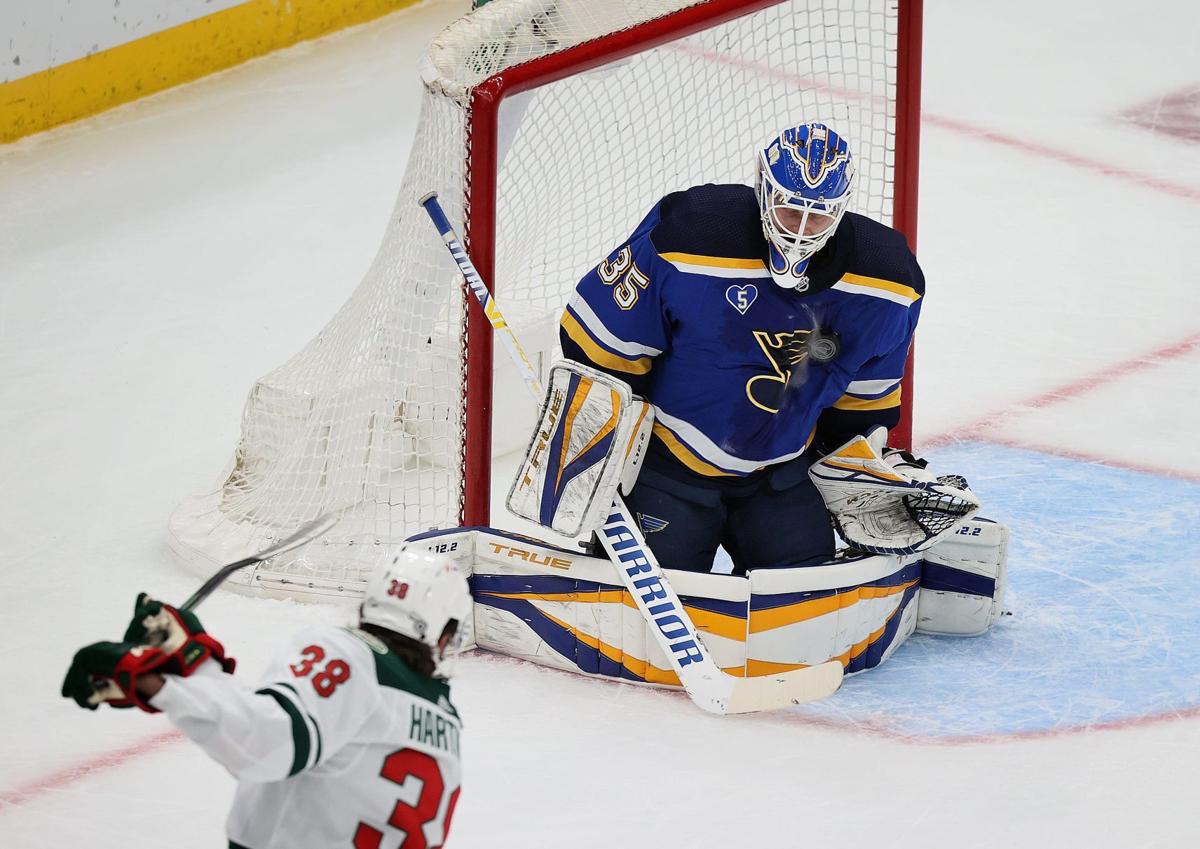 Blues goalie Ville Husso blocks a shot by Wild right wing Ryan Hartman on Wednesday, May 12, 2021, in the first period of a game at Enterprise Center in St. Louis, Mo. Photo by Christian Gooden, cgooden@post-dispatch.com

The Blues will increase the capacity for Enterprise Center to 5,000 for the first two rounds of the NHL playoffs.

While the Cardinals anticipate having about 30,000 fans in Busch Stadium for a series with Chicago in late May, restrictions are tougher on indoor facilities. The Blues right now have a capacity of around 4,100 for games.

Larger and larger crowds are being allowed in around the league, with Vegas drawing a league-high 7,567 for each of its games with the Blues last weekend.

“Vegas, they have it rocking up pretty good at 7,500,” Blues forward Brayden Schenn said. “It felt like quite a few compared to what we’ve been playing in front of for the past year. Any fans help, so for us 5,000 (is good), hopefully that goes up more and more. We’ll see. We obviously love playing in front of our fans and look forward to playing in front of more fans each night.”

The Blues had been confident that defenseman Jake Walman, who had been vaccinated, had a false positive for the illness which kept him out of Monday’s game with Los Angeles. But subsequent testing has confirmed that Walman is positive for COVID, which will keep him out an undetermined amount of time.

Assuming Walman was asymptomatic, which seems likely if the team thought he had a false positive, he has to remain in isolation for 10 days from the first positive test, which was Monday. That would be through next Thursday, which would keep him out of the first two or three playoff games depending on the schedule.

Walman is the first Blue to test positive this season, and the Blues were the last American team to have a player show up on the league’s COVID protocol list, though showing up on the list doesn’t require a positive test. Sammy Blais and Zach Sanford both showed up on the list after positive tests, but subsequent testing showed those to be false positives and each player missed only one game.

The three injured Blues — Vladimir Tarasenko, Blais and Vince Dunn — all missed another game on Wednesday, though coach Craig Berube said there was a chance of any or all of them playing on Thursday in the regular-season finale. The three skated separately from the team on Wednesday with the taxi squad. Niko Mikkola, who missed the game Monday with an upper-body injury, was back in the lineup.

Tyler Bozak sat out the game Wednesday, but that was to give him the day off.

Along with recalling Klim Kostin to the roster, the Blues on Wednesday sent forward Dakota Joshua back to the taxi squad and sent forward Nathan Walker, who was on the taxi squad, back to Utica. The last move would seem to be procedural more than anything; Utica’s season ends on Sunday and there’s no postseason for the Comets, so by the time Walker clears quarantine, the season will be over.

It's a three-year deal with Farjestad BK in Swedish Hockey League. De la Rose had been acquired in the Robby Fabbri trade with Detroit.

Blues goalie Ville Husso deflects a shot on Wednesday, May 12, 2021, in the second period of a game at Enterprise Center in St. Louis, Mo. Photo by Christian Gooden, cgooden@post-dispatch.com

Blues goalie Ville Husso blocks a shot by Wild right wing Ryan Hartman on Wednesday, May 12, 2021, in the first period of a game at Enterprise Center in St. Louis, Mo. Photo by Christian Gooden, cgooden@post-dispatch.com