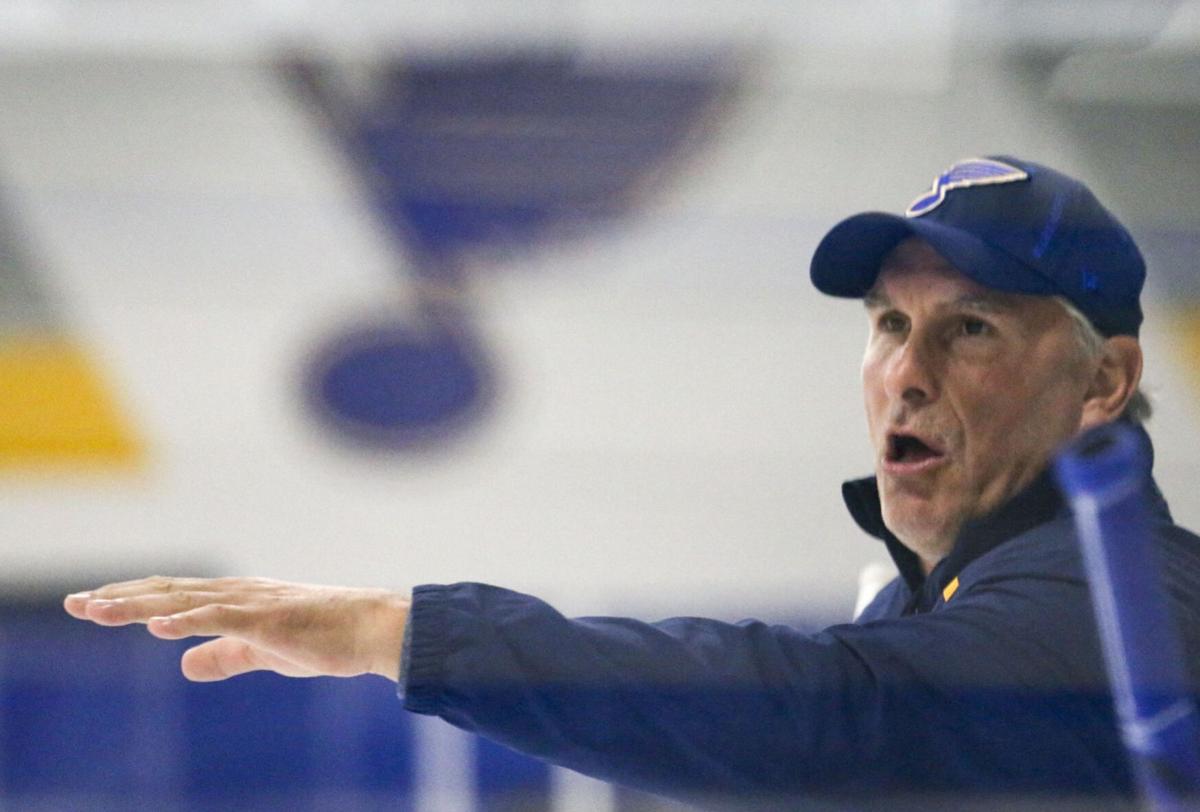 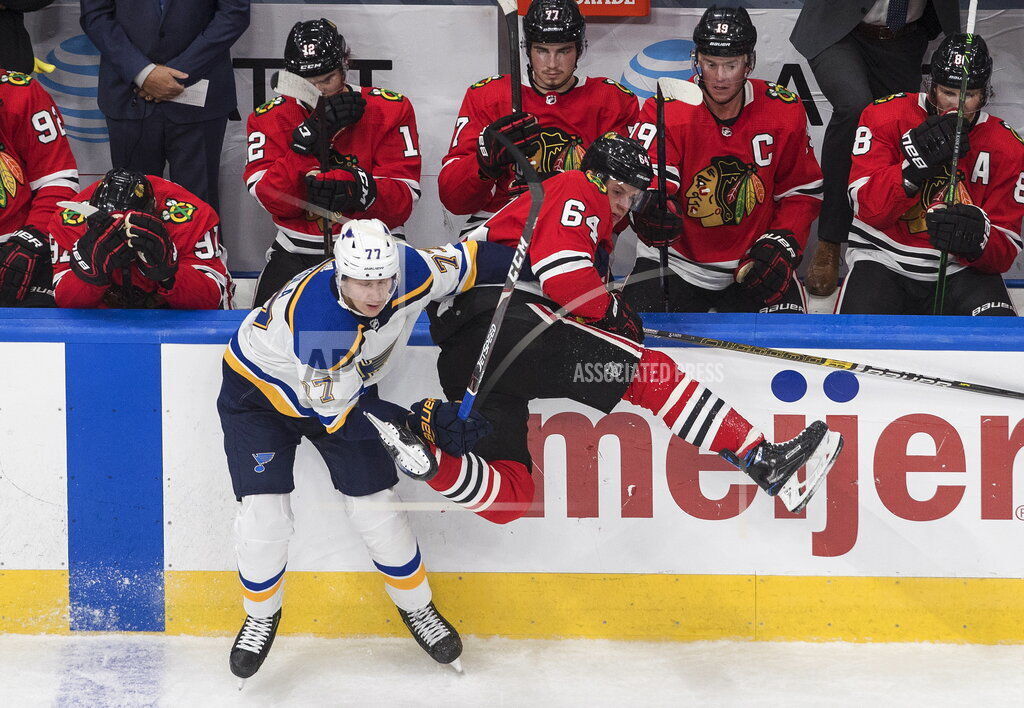 The Blues will try to get playing time in the round-robin games for defenseman Niko Mikkola, here checking the Blackhawks' David Kampf in Wednesday's exhibition game.

EDMONTON, Alberta — Now it gets real.

Yeah, but now it matters.

Welcome to the NHL’s round-robin, a state of play somewhere between regular season and postseason.

While seeds Nos. 5-12 in the Western Conference square off in a best-of-5 series, loser goes home, the top four seeds in the West play each other here in the round-robin.

That would be, in order of regular-season points percentage, St. Louis, Colorado, Vegas and Dallas. They each play one game against the other three teams. But no one gets eliminated — all four will advance to the NHL’s Round of 16 (traditionally the first round of the playoffs in non-pandemic times).

At the conclusion of the three round-robin games, the team with the most points (two for a win, one for an overtime or shootout loss) gets the No. 1 seed for the Round of 16. And for the remainder of the Western Conference side of the bracket, as long as they keep advancing. The team that finishes second in the round-robin gets the No. 2 seed. And so on.

But given there are no fans, there’s no home-ice advantage. The only thing gained from being the higher seed, and thus being the “home” team, is you get the last line change four times if the series goes the full seven games.

In terms of opposition, are you necessarily gaining a huge advantage by playing the No. 5, No. 9, or No. 12 seed? The NHL is so tightly-balanced. Every team has gifted players. Exhibition game or not, just look at the Blues’ 4-0 loss Wednesday to No. 12 Chicago.

Last year, the regular-season champions from all four divisions got bounced in the first round. And with everything that’s gone on this season, things could be even more unpredictable this time around.

Truth be told, the NHL added the round-robin aspect to give the top four seeds something to do while the lower eight seeds in each conference were duking it out in their elimination series. It’s a way to knock off rust accumulated during the league’s 4 ½ month coronavirus “pause.”

Blues general manager Doug Armstrong perhaps framed it best in regards to the round-robin, in remarks at the start of Phase 3 (training camp).

“Certainly you want to put your best foot forward,” he said. “But I think the eight teams that are (automatically) in the group of 16 have a little bit of latitude to try and get as many guys games as necessary.”

By “eight teams,” Armstrong meant the top four seeds in each conference.

“I think the seeding isn’t really gonna matter,” Armstrong continued. “When the four teams that have a bye go into the round-of-16 play, they’re gonna be playing someone that’s feeling really good about themselves.

“Someone that’s just won a three-out-of-5 series, and has a little bit of sort of game experience in this tournament.”

And that’s when you want to be at the top of your game, when it’s win or go home.

“So I don’t really put a lot of stock into finishing 1 through 4 except we want to be in a good frame of mind when we get to the Round of 16,” Armstrong said.

Naturally, the Blues want to win, starting with Sunday’s 5:30 p.m. (Central) round-robin opener against the Avalanche here at Rogers Place. They face Vegas on Aug. 6, and then Dallas on Aug. 9.

The key is to continue ramping up your game, and to be playing your best hockey leaving the round-robin and entering the Round of 16.

So how much stock does coach Craig Berube put into the round-robin games?

“Well, I think you put in a lot,” he said. “We have three games to be at the top of our game, that’s the way I look at it. So I want our team to go out and get to our game right away, play as hard as we can.

Even so, Berube would like to get some of the team’s extra players into the round-robin, if possible. With the luxury of being able to use two additional players on an expanded game-day roster against Chicago, Berube got Troy Brouwer and Niko Mikkola some work.

From here on out it’s back to the regular 20-man game-day roster. Even so, it would be nice to get a Jordan Kyrou or Jacob de la Rose into one of the round-robins, or give Jake Allen a start. After all, it’s been a long time since play stopped on March 11.

“I would like to get different players in some of these games,” Berube said. “We’ll see how it goes. I think it’s important that if they can get a game here and there, it’ll help them. We’re gonna need them at some point, so it’d be nice. But I’m gonna play it game-to-game right now.”

David Perron, never shy with an opinion, is one who believes that seeding IS important coming out of the round-robin. And he’s not a fan of the fact that Dallas and Vegas were included.

“Obviously a little disappointed to see how that turned out,” Perron said during camp. “I think some teams got the better of it. Some teams, like us, got the worst of it. There’s no perfect situation.

“But obviously with Vegas and Dallas, two teams that weren’t really gonna catch us (in regular-season points), and now they have a chance to maybe be first. So it’s gonna be interesting these three games.”

By the way, if there’s a tie in the round-robin standings at the end of the three games, the tiebreaker is regular-season points percentage. With the best points percentage in the West, the Blues would win any tiebreakers. So they do have that going for them.

“The biggest thing is just getting your game tight and getting it where it needs to be,” defenseman Robert Bortuzzo said. “The seeding’s important but I think in any playoffs the team that continues to get better through it all is the team that’s gonna have the most success.”

Blues can act like fans with five NHL games on Saturday, B3

(Updated) Penalty-prone Blues are 0-for-Edmonton after another third-period collapse that saw Vancouver score three times for a 5-2 win.

Next up, Vancouver: Blues tumble to No. 4 seed with 2-1 shootout loss to Dallas

If the Blues don’t pick up their game, the seeding won’t matter. They’ll be back in St. Louis before you can say: Defending champs dethroned.

Blues get 2 p.m. start against Dallas; face Calgary or Vancouver in Round of 16

Blues will face either Calgary or Vancouver in the Round of 16.

Blues-Stars game Sunday will be televised on Channel 5

Forward doesn't skate on Monday after appearing to hurt leg on Sunday.

Blues lose 2-1 shootout to Dallas, face Vancouver in first round.

Jake Allen gets the start in goal for St. Louis.

Still winless in Edmonton, Blues want to crank up intensity in round-robin finale against Dallas.

The defending Stanley Cup champions left a lot to be desired in the round-robin, going 0-3 and squandering third-period leads in all three contests.

Blues went 1-1-1 vs. Vancouver, and needed a bizarre overtime for that one win.

Blues notebook: Dunn is mum on his absence from practice

Also, Blais is in doubt for Game 1 vs. Vancouver after getting hurt vs. Dallas

The Blues will try to get playing time in the round-robin games for defenseman Niko Mikkola, here checking the Blackhawks' David Kampf in Wednesday's exhibition game.