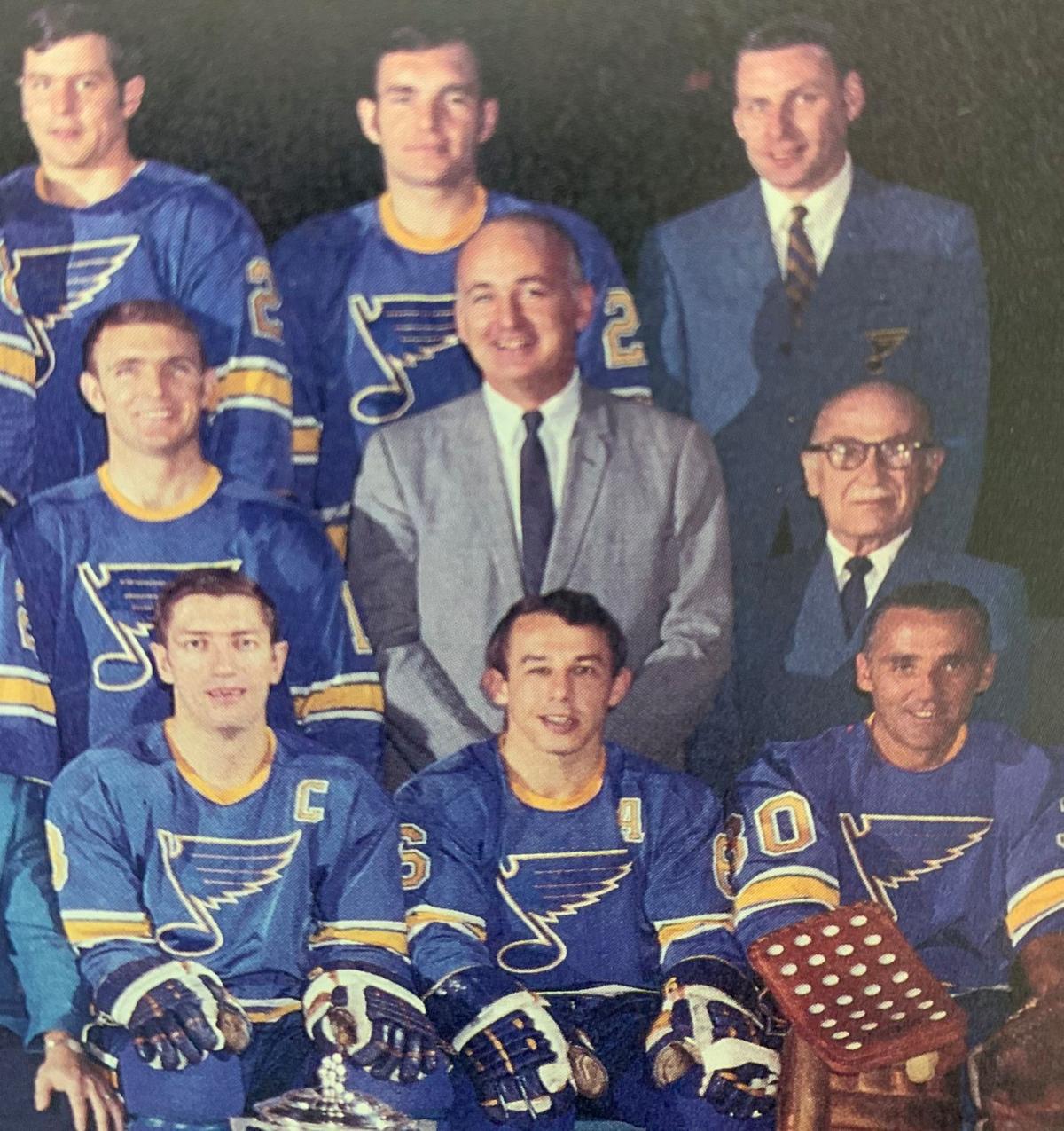 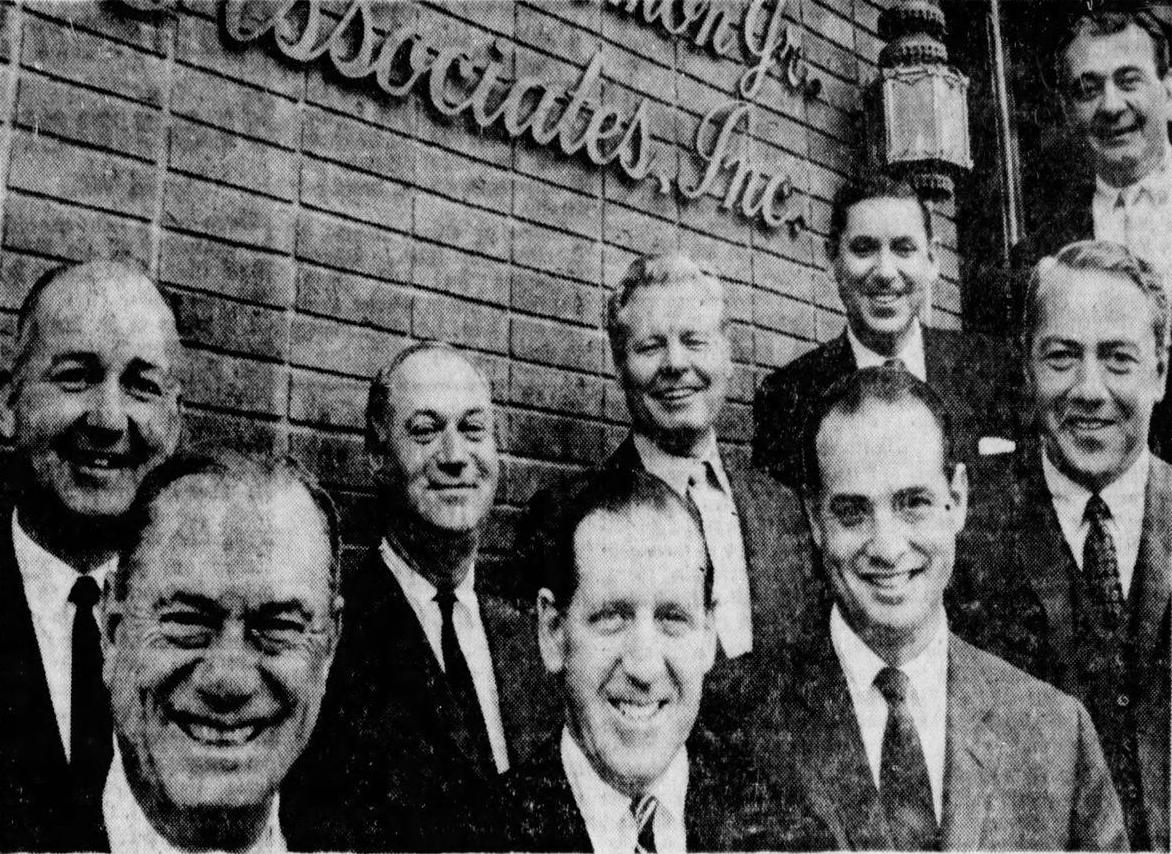 Attorney James D. Cullen (second row, left) is shown in this photo of a Post-Dispatch newspaper clipping from 1967. Cullen was meeting with the newly formed board of directors of the St. Louis Blues, who were joining the National Hockey League as an expansion franchise. Sid Salomon Jr. is in front of Cullen, and Sid Salomon III is third from left in the front row. (Post-Dispatch photo by Scott C. Dine.)

EDMONTON, Alberta — The call came on a Sunday morning in 1966. Sid Salomon Jr. was on the other line.

“We’re getting up a deal involving hockey in St. Louis,” Salomon said. “Would you be interested in representing us?”

James Cullen, a St. Louis attorney, knew Salomon from politics and the insurance business. Cullen, a devout Catholic, said he’d be over right after Mass.

“It’ll take you a little longer than that,” Salomon replied. “We’re in Miami.”

They met in an Eastern Airlines office in Miami; Cullen later said they wrote the deal to purchase The Arena on a plain piece of paper. It was the birth of the St. Louis Blues, and Cullen was there every step of the way for the first decade or so of the franchise’s existence as secretary and legal counsel.

There probably aren’t many current Blues fans who know of Cullen. But in the 1960s and ‘70s — anybody who was anybody in St. Louis knew who Cullen was.

So when James Daniel Cullen passed away on July 29 at age 95, an era in Blues hockey ended. He was the last living founding member of the hockey team.

“You’re right. It’s kind of the end of the era,” said his son Mike Cullen. “He was very much one of the founding fathers of that franchise.”

He traveled to New Orleans to get the licensing rights from the estate of blues legend W.C. Handy to the “St. Louis Blues” song. He attended NHL meetings as the team’s alternate governor. On a couple of occasions, with the franchise in dire financial straits, he tried to put ownership groups together.

When players got in a little trouble, like that memorable fight in the stands in Philadelphia in 1972, it was Cullen who bailed them out and handled the legal situation.

And as his influence quickly grew in the NHL, he came within an inch of becoming league president — now known as league commissioner.

“He did everything from the very beginning,” said Carol Salomon, ex-wife of the late Sid Salomon III and daughter-in-law of original Blues owner Sid Salomon. “He was very loyal, a fine friend of the family. He was there to guide them along and he was very critical to the success.

“With the organization, he was involved in everything. The trades. They would talk all night on the telephone. Jim was really into every part of the formation and the continuation of the Blues. The early years. ... And a very dear friend of Sid III’s. They palled around together, and gave each other a lot of support.”

Mike Cullen, a St. Louis attorney himself, has all sorts of stories about his father.

As a youngster, he remembered tagging along with his father to Springfield, Mo., to meet with Pat Jones, founder of Modern Security Life Insurance Co. In those days Jim Cullen had a lot of clientele in the insurance business.

Jones had a lot of Brahman bulls that Mike might like to see, his father told him. Yes, there were bulls and there was also an indoor pool — unheard of in those days. There were some older boys swimming in the pool and one of them was Jerry Jones, Pat’s son and future owner of the Dallas Cowboys.

Young Mike also remembered “Uncle Frank” coming to the Cullen home in Richmond Heights several times a year. On every trip, he would tell young Mike, maybe 10 years old at the time, to get into a “four-point” stance and give him some football tips.

Turns out “Uncle Frank” wasn’t a relative at all. He was Frank Leahy, the legendary Notre Dame coach, whose visits to St. Louis were to treat an illness at Barnes-Jewish Hospital.

About four years after helping to form the expansion Blues, Cullen concurrently became general counsel for the NHL. That’s right, he worked for both the team in St. Louis and the National Hockey League. There was full disclosure to avoid any conflict of interest.

Cullen became a member of the NHL’s executive committee. For the league, he negotiated the purchase of the California Golden Seals from Charles O. Finley. He was instrumental in the truce between the NHL and the World Hockey Association.

Then NHL president Clarence Campbell took Cullen under his wing and eventually Cullen became Campbell’s hand-picked choice to succeed him.

“Cullen is the top candidate,” Stan Fischler, one of the most influential hockey writers of the day, wrote in 1974. “Insightful, personable, and better looking than (NFL commissioner) Pete Rozelle. ... Cullen is the man.”

Cullen told Post-Dispatch columnist Jeff Meyers at that time that taking the league president job “depends on the circumstances. I would want the terms of employment to be very clearly stated.”

And Mike recalled his father telling him that he was startled to see Dave Molson, owner of the Montreal Canadiens and part of the Molson beer family, walk into a league meeting in Montreal with a gun in his briefcase.

Montreal was league headquarters at the time, the Quebec separatist movement was strong at the time, and just a few years removed from violence. As Mike recalled, his father said he’d take the president’s job, if the league opened an office in New York.

“My dad just had a concern of moving to Montreal, bringing his family to Montreal, because of the political situation up there,” Mike said.

“That was it,” Mike said. “Looking back on it, he never told me he regretted it, but I gotta tell you I think that’s something that he regretted.”

Cullen’s time with the Blues came to an end in 1977, the year the Salomons sold the team and The Arena to Ralston Purina.

But there was much to Cullen’s life beyond hockey. As a teenager, he was assistant traveling secretary for the St. Louis Browns and St. Louis Cardinals from 1940-43, before serving as a navigator-bombardier for the Army Air Corps during World War II.

Early in his career, he was a civil rights attorney working with the Rev. Ralph Abernathy and the Rev. Martin Luther King. Later in a legal career that included a diverse domestic and international clientele, he drafted the constitution of the Turks and Caicos Islands.

“I knew him well,” said Carol Salomon, who has called Durango, Colo., home for the last 25 years. “He was a wonderful family man. He was a very intellectual man. He was well-read.

“In a very quiet way, he was very wise. When he spoke, you listened and respected him. . . .He was very loved and well-connected to people. He had just a nice way about him that people were drawn to and respected.”

And he was an original Blue, as much as Al Arbour, the Plager brothers, Glenn Hall or the Salomons.

A funeral Mass with social distancing is scheduled for Aug. 21 at Immacolata Catholic Church in Richmond Heights.

There will be no player safety hearing on the hit by Colorado's Valeri Nichushkin that knocked Bortuzzo out of Friday's game.

They'll face San Jose on Monday night in front of a smattering of fans and try to forget their miserable 8-0 loss to Colorado on Friday night.

Practice update: Scandella back for noisiest practice of season

Defenseman missed Wednesday's game with upper-body injury; Berube expects him to play vs. Kings on Saturday

Attorney James D. Cullen (second row, left) is shown in this photo of a Post-Dispatch newspaper clipping from 1967. Cullen was meeting with the newly formed board of directors of the St. Louis Blues, who were joining the National Hockey League as an expansion franchise. Sid Salomon Jr. is in front of Cullen, and Sid Salomon III is third from left in the front row. (Post-Dispatch photo by Scott C. Dine.)