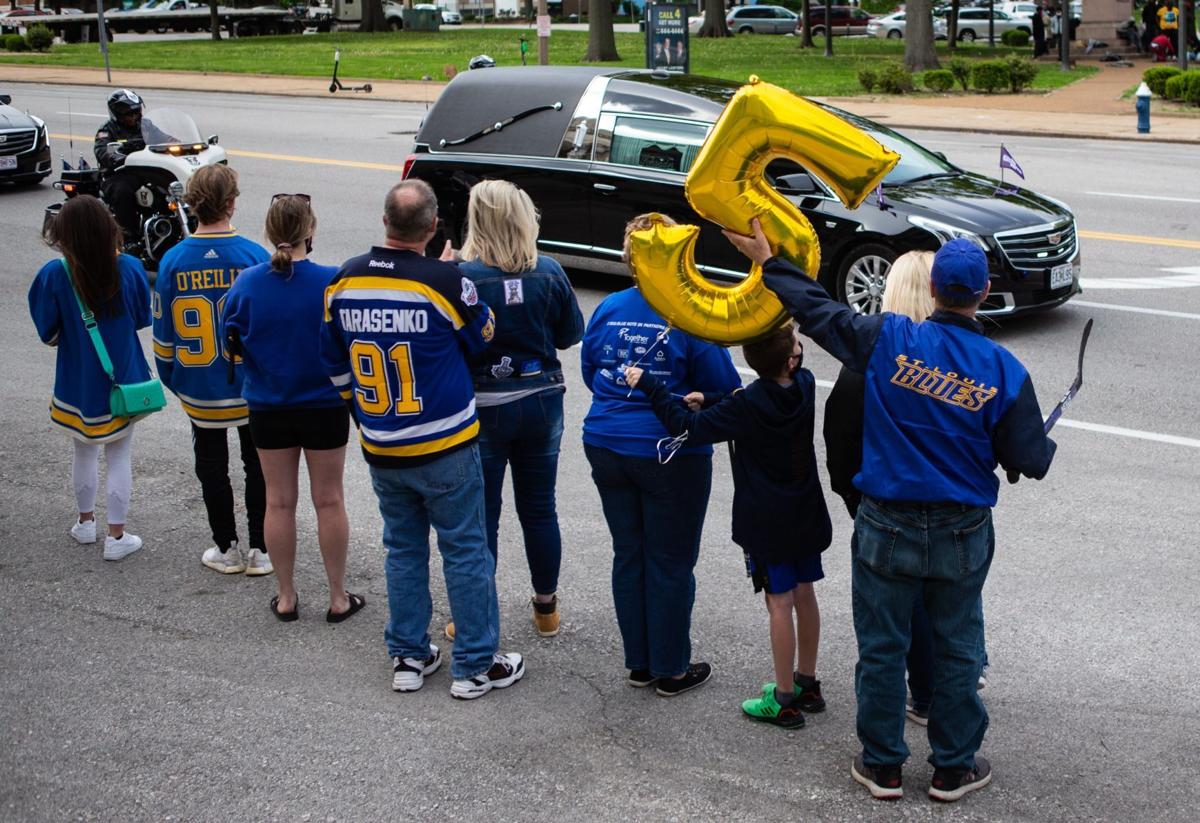 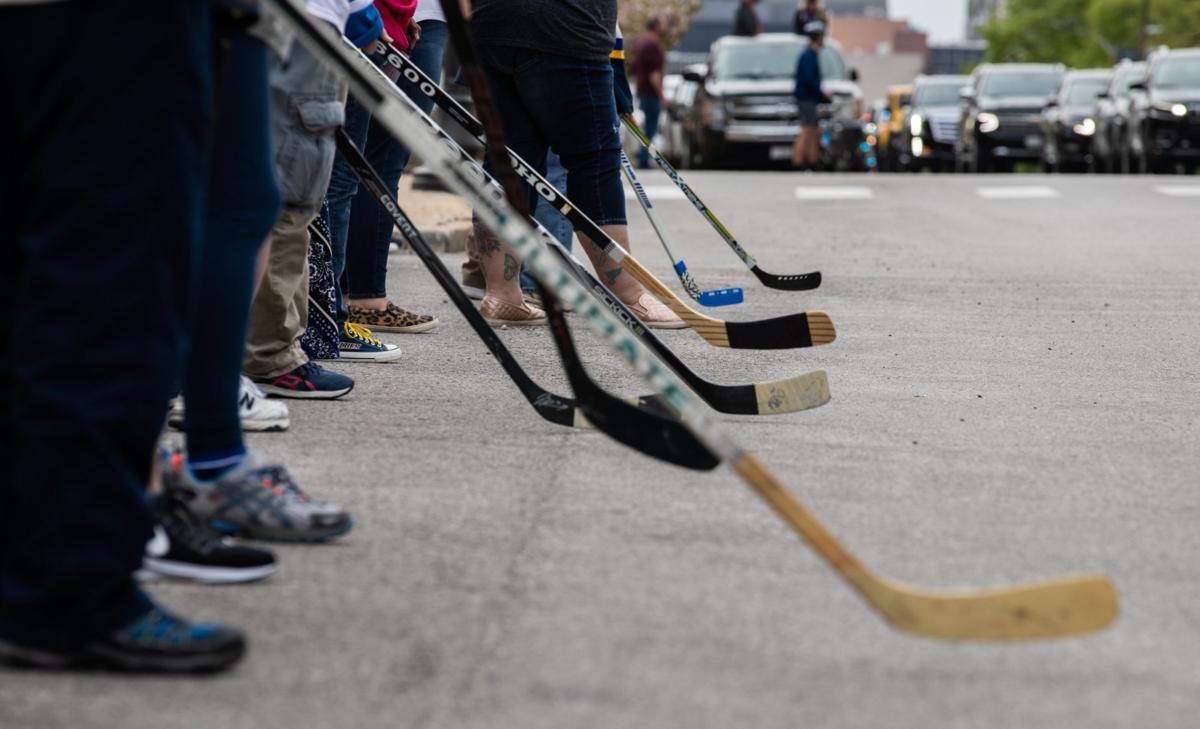 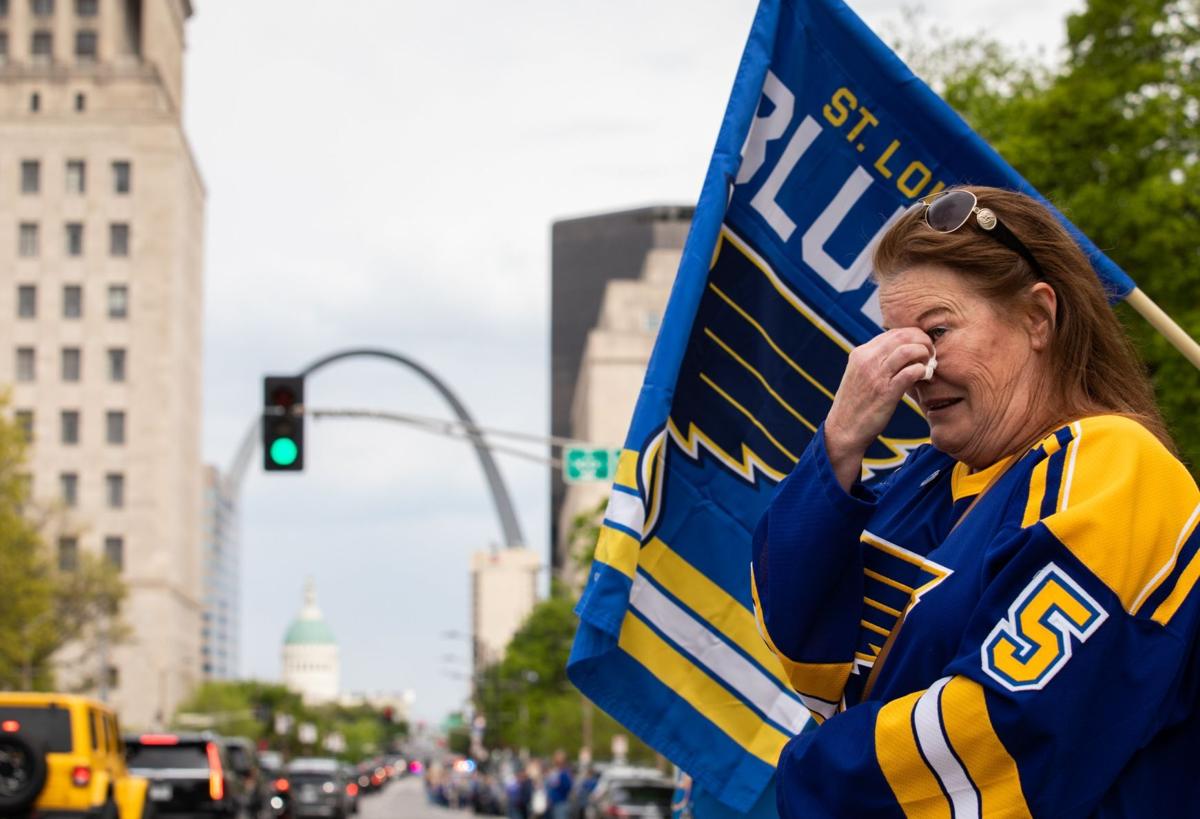 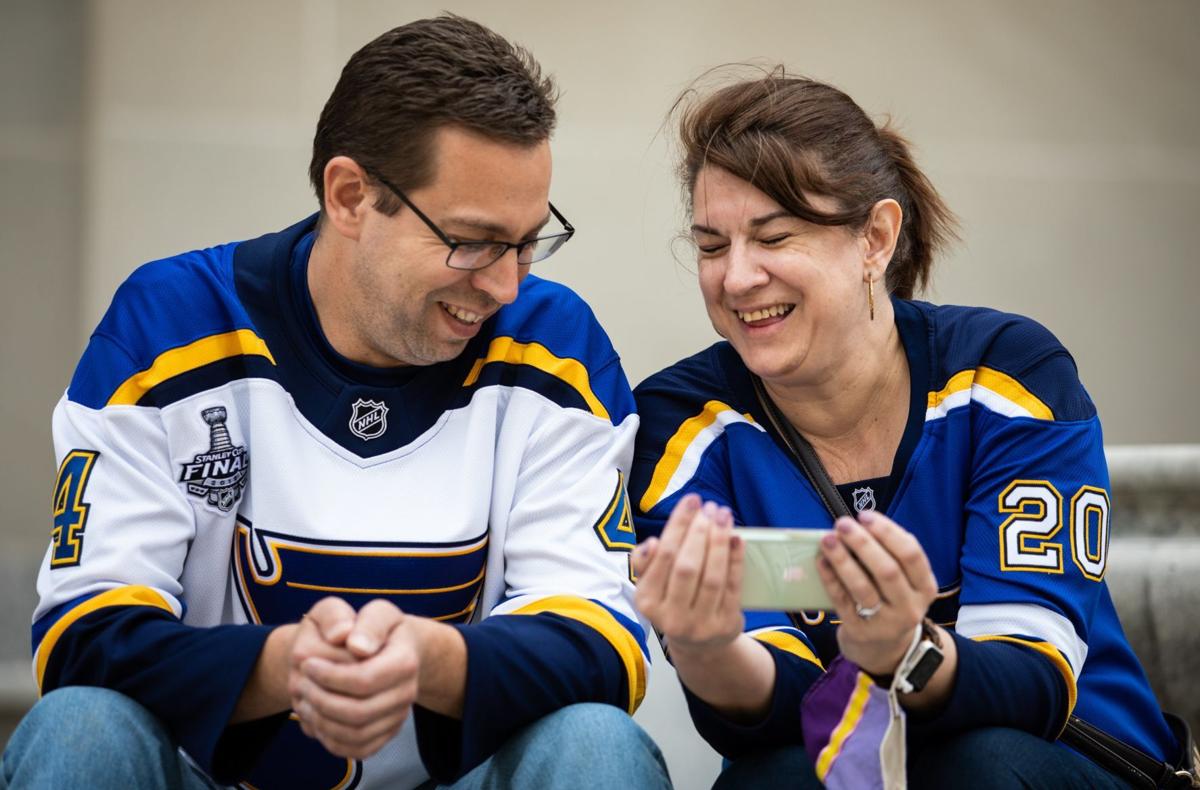 St. Louis Blues fans Mike Denzel, left, and Michelle Shatta laugh while watching the livestream of Bob Plager's service from outside the Enterprise Center, in wihich the memorial was taking place, on April 18, 2021. They were waiting to pay tribute to him as his funeral procession leaves for Bellerive Gardens Cemetery. "He was always so willing to talk to anybody," said Denzel. "He was the nicest guy in the world." (Sara Diggins, sdiggins@post-dispatch.com) 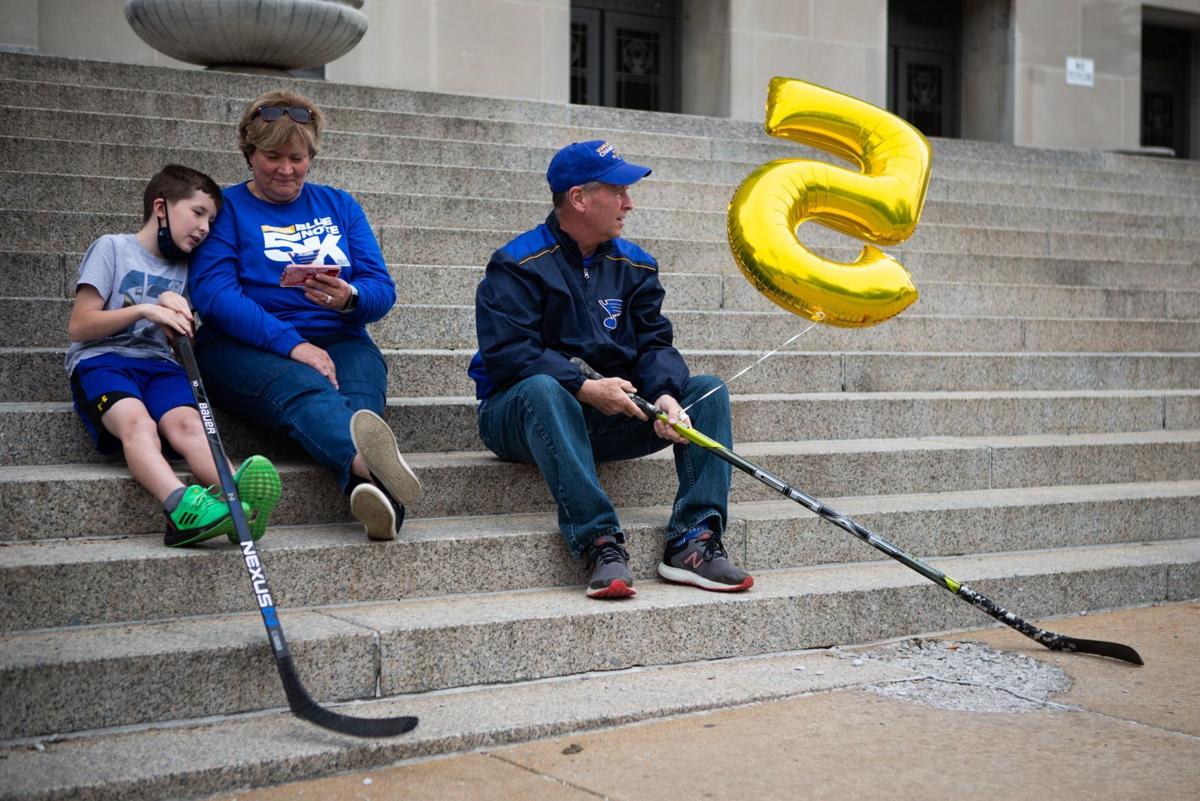 St. Louis Blues fan Daniel Feldmeier, left, and his grandparents Karen and Joe Staten sit on the steps of the Stifel Theatre while waiting to pay tribute to Blues legend Bobby Plager as his funeral procession leaves Enterprise Center on April 18, 2021 for Bellerive Gardens Cemetery. "I don't think Bobby ever met a stranger," Joe Staten said. "I've met him a few times and each time was an incredible experience." (Sara Diggins, sdiggins@post-dispatch.com) 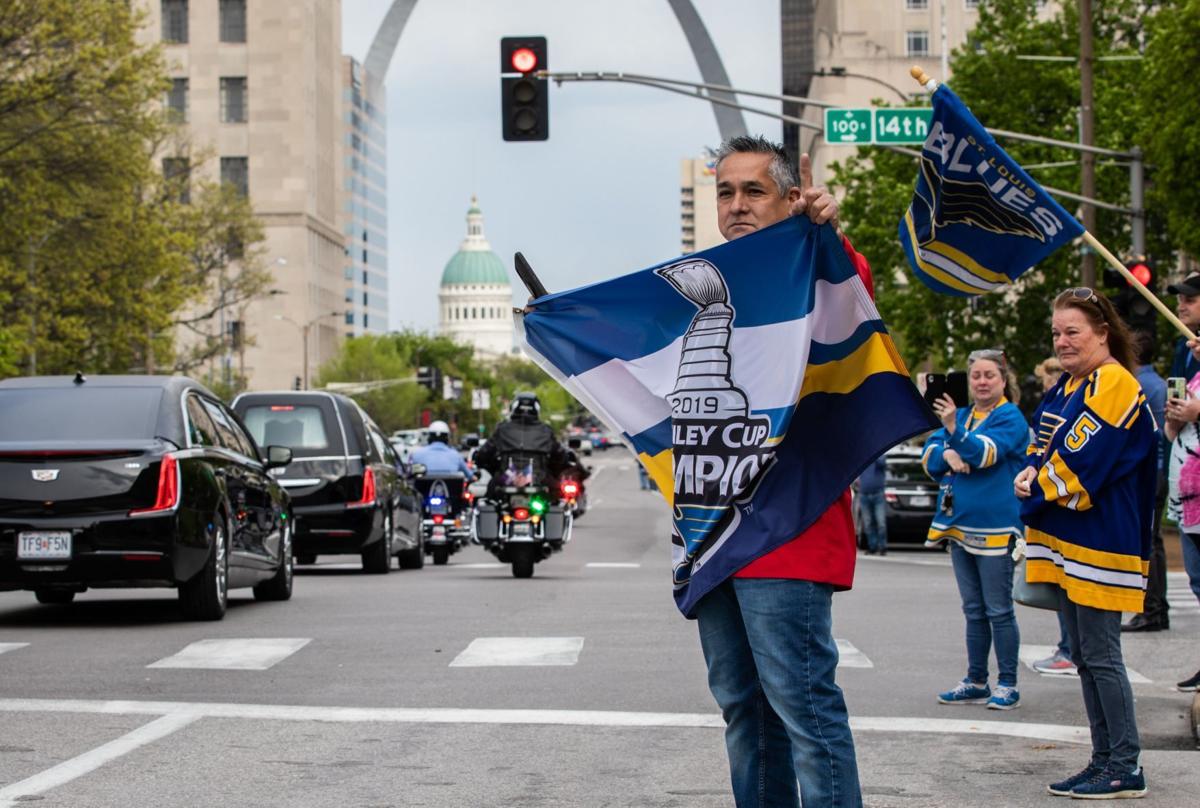 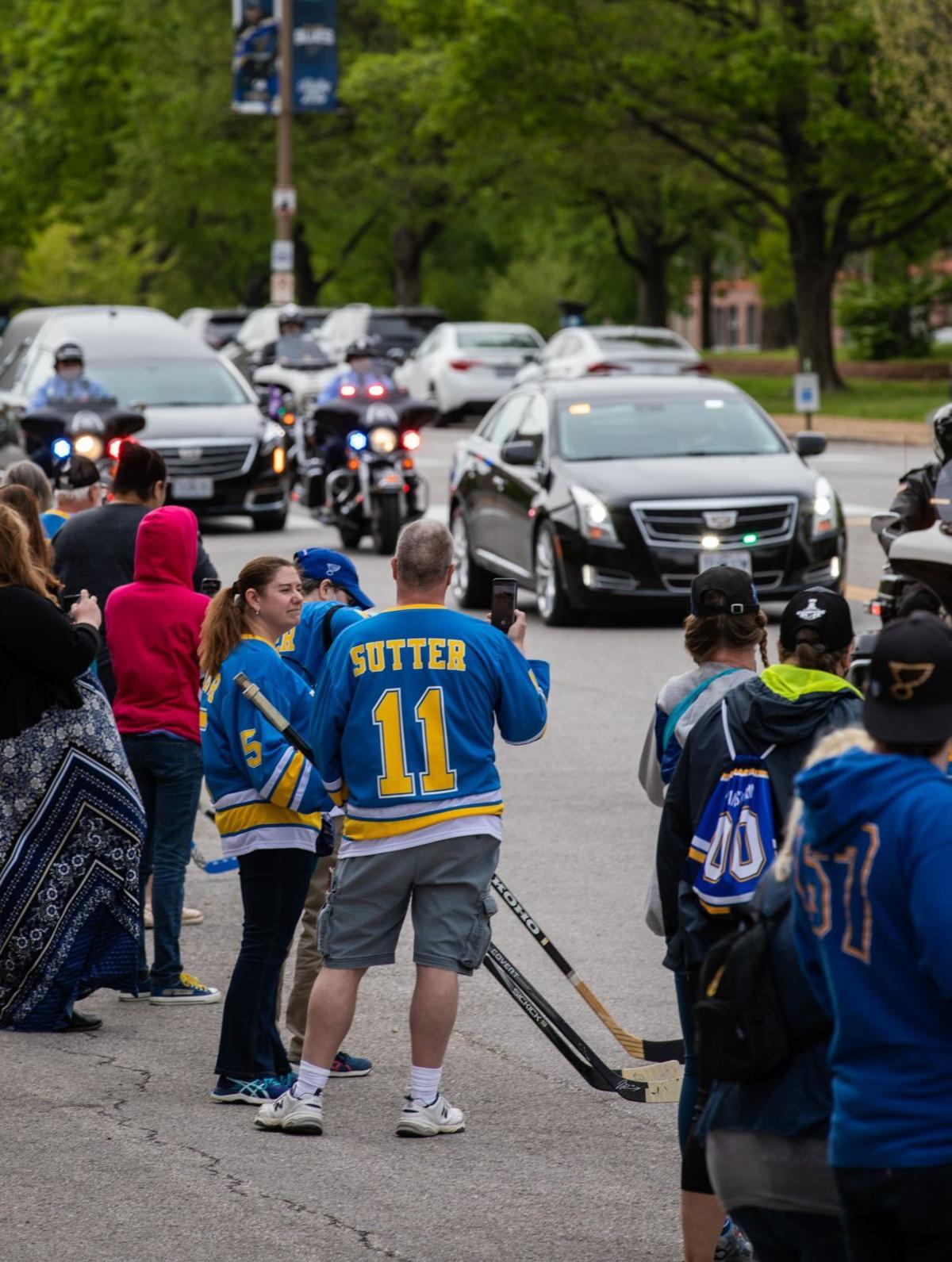 In front of Stifel Theatre on Market Street on Sunday afternoon, a group of hockey fans, some with sticks, awaited the funeral procession that would take Bob Plager from the celebration of his life inside the adjacent Enterprise Center to Bellerive Gardens Cemetery in Creve Coeur for his burial.

As the hearse passed, it was greeted with stick taps, the time-honored hockey salute usually given to acknowledge a fight or a goal, but in this case in tribute a remarkable hockey life.

“If Brett Hull is the Mickey Mantle of the Blues,” said former Blues player and broadcaster Kelly Chase, whose early days in the organization were shepherded by Plager, “Bobby Plager is most definitely the Babe Ruth of hockey in this town.”

“How often do we get to rub shoulders with someone responsible for so much, someone who impacted so many lives?” asked former Blues defenseman Barret Jackman, who Plager specifically chose to be given his No. 5. “How many skates have been laced, jerseys have been bought and spirits lifted because of him? Bobby was the rarest of men. He was a man that carried the city and franchise on his back, yet never noticed the weight.”

Plager, who died of a heart event while driving to the rink on March 24 at the age of 78, was remembered for the special place he held in the history of the team and the city that became his adopted home, a hockey lifer who never stopped being a man of the people, throwing as much energy into spreading the gospel of the sport and general goodwill as he did on hip checks in his playing days. The ceremony at Enterprise Center was both humorous and emotional.

“Bobby Plager not only had that wit and humor,” recalled Rob Ramage, who also wore Plager’s No. 5 when he was with the team, “he personified it. When I was winding down my time with the Blues, I had a great conversation with Bobby. He said, ‘Rob, you know, I used to be a stay-at-home defenseman too. Then one day, they told me to stay at home.’ Bobby had a way with words.”

An invited crowd of about 1,000 family and friends, including Wayne Gretzky and players and coaches with the current Blues team, attended the ceremony. (Because of the NHL’s COVID protocols, the current players sat separate from the rest of the crowd, spaced out in club-level suites.) Chairs were spread out on the flooring laid out on the ice, but with the Blues logo, near and dear to Plager’s heart, at center ice left uncovered. Other attendees sat in the stands, amid the team’s cardboard fan cutouts.

The funeral procession down Market recalled a long-dreamed-of event in Plager’s life, when the original Blue finally got his victory parade. The dream of a parade with the Stanley Cup had long been a theme for Plager, who as a player went to the Stanley Cup Final in each of the franchise’s first three seasons, with the team never winning a game. The Blues would not go again until 2019, the year they broke the sport’s longest championship drought. The Blues had, at that point, played more games than any other NHL team without winning the Cup, and Plager had been around, in some form or another, for all of them.

Plager’s son-in-law, Dave Briggs, noted how amazing the final years of Plager’s life were, including the chance to see a lot of his two grandchildren, Jacob and Katie. Jacob gave an insight into what having Plager as a grandfather was like, noting that on his fifth birthday, his grandfather took him to a Hooters.

“The last five years were incredible,” Dave Briggs said. “He was able to spend a lot of time with us because we lived 10 minutes away. There was the 50th anniversary of the Blues, the Winter Classic, the All-Star Game, his No. 5 being retired by the Blues, and finally the Blues beating the Bruins for the Stanley Cup.”

“We shouldn’t wait to honor the good players and most importantly the great human beings,” said Chase, who fought to hold back tears throughout his remembrance, “so retiring Bobby Plager’s jersey in the rafters with (his brother) Barc, while Bobby was alive, to honor and thank him personally for all he’s done for this franchise and this city, is singlehandedly the greatest thing this organization has ever done.”

Plager’s life was more than just being on hand for the big events. There was no event too small, as the team found out when he transitioned from being on the hockey operations side to being on the promotions side. All the Blues had to do was ask and Plager would attend. The team would give him leftover promotional items from games and he would put them in the trunk of his car and hand them out to people he met.

“Greatest ambassador the St. Louis Blues have had,” Ramage said. “His legacy will live on forever.”

Plager’s pallbearers were former Blues Bruce Affleck, Bernie Federko and Tony Twist; Bobby Gassoff Jr., whose father’s No. 3 was retired by the Blues after his death in 1977 at age 24; and Kelly and Kevin Plager, sons of Plager’s older brother, Barclay. Barclay, who played and coached for the Blues, died in 1988. His retired number is next to Bob’s in the rafters.

Retired Blues anthem singer Charles Glenn sang, accompanied by organist Jeremy Boyer on keyboard. Plager’s coffin was wheeled out of Enterprise Center to the St. Louis Blues March, the W.C. Handy song that has become the team’s anthem, played by brass and percussion members of the St. Louis Symphony Orchestra.

“Thank you Bobby for teaching us to respect the logo, and being responsible men in this city that loves us,” Chase said. “And may he rest in peace Coach. Cheers buddy.”

They will likely open postseason against Vegas.

St. Louis Blues fans Mike Denzel, left, and Michelle Shatta laugh while watching the livestream of Bob Plager's service from outside the Enterprise Center, in wihich the memorial was taking place, on April 18, 2021. They were waiting to pay tribute to him as his funeral procession leaves for Bellerive Gardens Cemetery. "He was always so willing to talk to anybody," said Denzel. "He was the nicest guy in the world." (Sara Diggins, sdiggins@post-dispatch.com)

St. Louis Blues fan Daniel Feldmeier, left, and his grandparents Karen and Joe Staten sit on the steps of the Stifel Theatre while waiting to pay tribute to Blues legend Bobby Plager as his funeral procession leaves Enterprise Center on April 18, 2021 for Bellerive Gardens Cemetery. "I don't think Bobby ever met a stranger," Joe Staten said. "I've met him a few times and each time was an incredible experience." (Sara Diggins, sdiggins@post-dispatch.com)