For openers, Avalanche too much for Blues
0 comments
Share this
{{featured_button_text}}
1 of 2 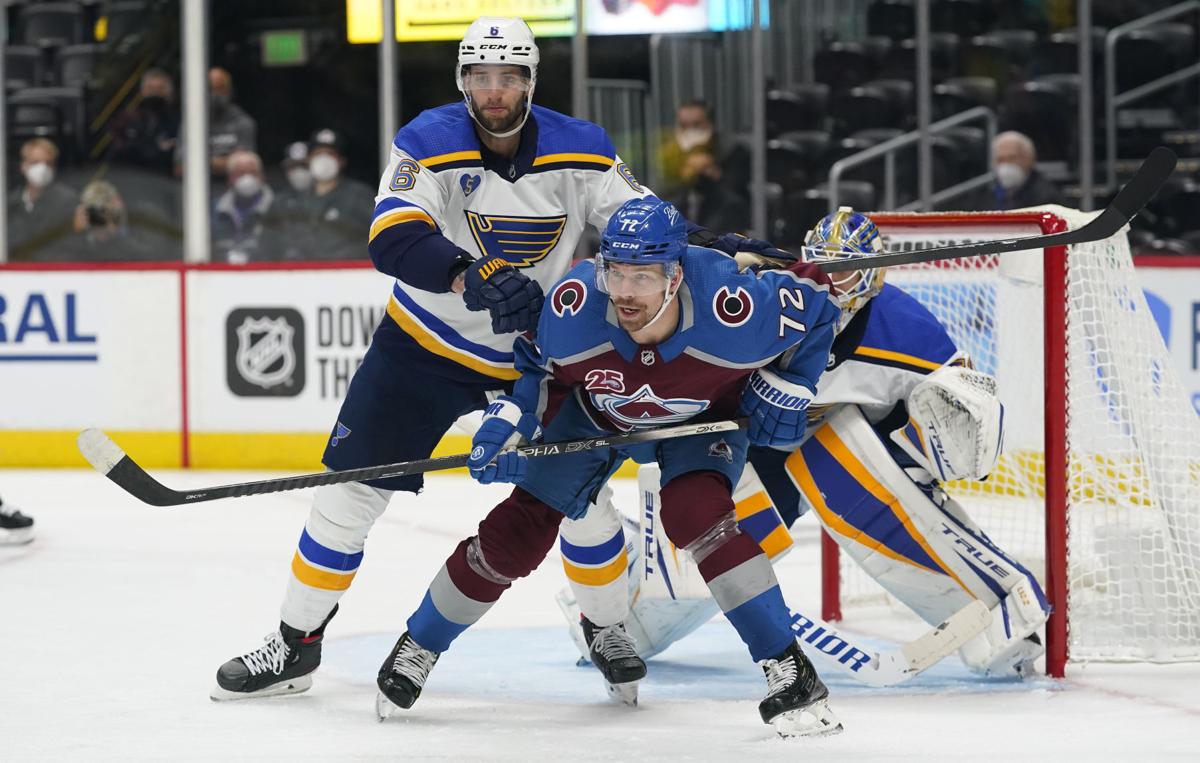 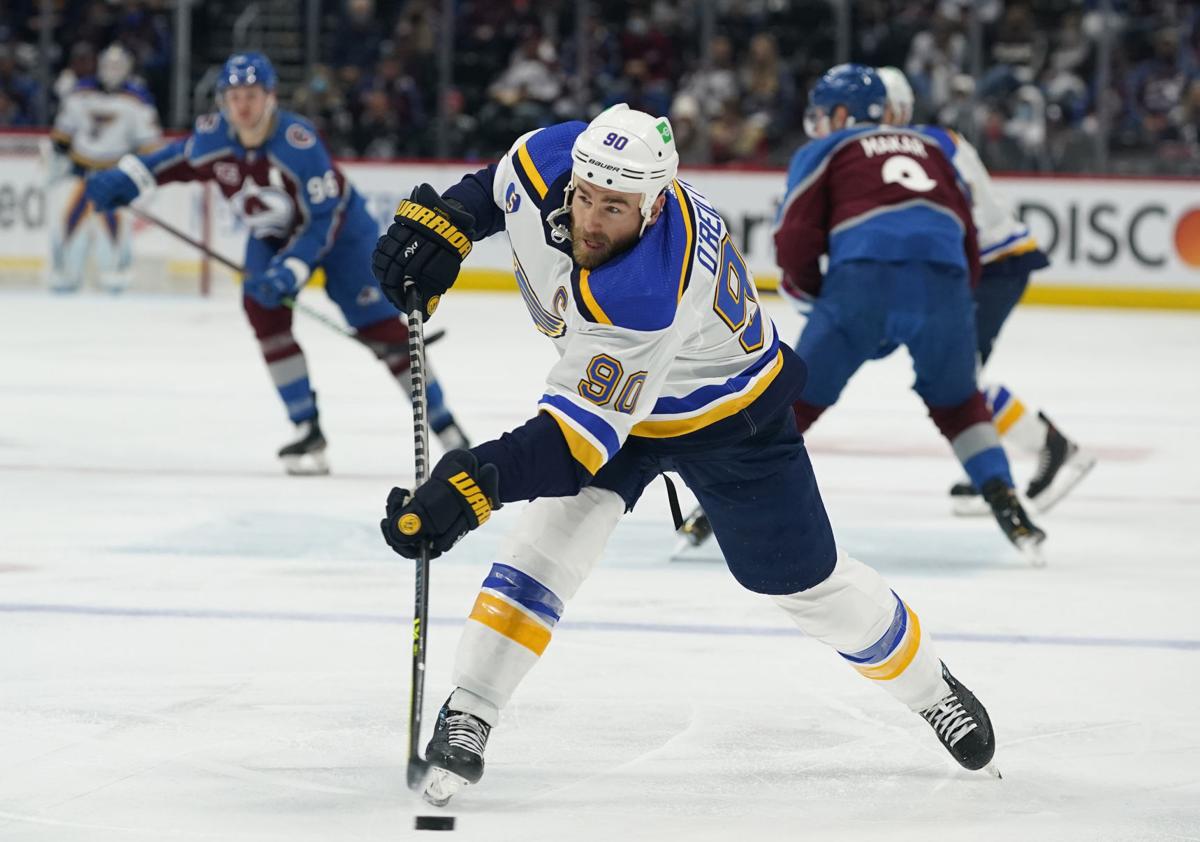 St. Louis Blues center Ryan O'Reilly shoots the puck at the net in the first period of Game 1 of an NHL hockey Stanley Cup first-round playoff series against the Colorado Avalanche, Monday, May 17, 2021, in Denver. (AP Photo/David Zalubowski)

DENVER — It took the Colorado Avalanche nearly six minutes to get their first shot on goal Monday at Ball Arena. But once they got going, man did they get going.

Nathan MacKinnon’s empty-net goal with 40 seconds left was the 50th shot on goal for the Avalanche in a 4-1 victory. Only a herculean effort from Jordan Binnington in goal kept it from being much, much worse for the Blues in Game 1 of this opening-round playoff series.

Take it from Tyler Bozak: “They keep coming. They come in waves.”

Again, it took a while for the Avs to get into their transition game, but once they did, it was a sight to behold. If you’re a Colorado fan, that is. But it’s not like the Blues aren’t used to what Colorado can do. They faced the Avalanche eight times this season, including six times in the month of April.

They had three off days following the regular-season finale to prepare and gear up. And yet, they still yielded half a hundred shots on goal. If they don’t find a way to tighten that up, this will be a short series.

“We gotta do a better job.” coach Craig Berube said. “We lost numbers a lot of times tonight in the game, let them come down on the rush with odd-man numbers against us. It’s tough.

“But we’ll better. We gotta manage the puck better. The execution wasn’t good with the puck tonight. And then just on the defensive side of things we let them come out of their zone way too easy and create odd-man rushes against us.”

Whether it was MacKinnon, Landeskog, Makar or Rantanen, the Colorado stars shined Monday night. MacKinnon had two goals and an assist. Gabriel Landeskog had the Gordie Howe hat trick: goal, assist, and fight (with Brayden Schenn.) He finished with two assists actually.

Cale Makar scored the game’s first goal on the power play, and Mikko Rantanen had a great setup on MacKinnon’s game-winning goal, which broke a 1-1 tie 30 seconds into the third period.

Yes, despite the track meet that Colorado conducted skating up and down the ice, with 32 shots on goal through two periods, it was a tie game entering the third.

“Yeah, on the road. Tied going into the third,” Bozak said. “Never a bad spot to be. Obviously we wanted to have a better third.”

“We had a really good opportunity but we let it slip away,” Berube said.

They were in the game largely through the grace of Binnington, whose 46 saves were a career postseason high and tied for the second-most in any game – regular season or postseason – in his NHL career.

And gave the Blues a chance to steal one in Denver.

“And that's what gives us confidence that if we're better in front of him, we’re going to have a chance to win and beat these guys,” O’Reilly said.

As it was, the Blues wasted a superb goaltending performance. They may not get another one like it in the series.

Binnington set the tone 6 ½ minutes in when he robbed Landeskog on a backhand from the doorstep and then handled a net-front rebound from MacKinnon. Midway through the second period, Binnington somehow got his left pad on a Rantanen net-front shot to thwart a 2-on-none rush by the Avalanche.

He also stopped a couple of more conventional breakaways and several other prime chances. Nonetheless, it added up to Binnington’s sixth straight postseason loss. He went 0-5 in the Edmonton bubble last August and hasn’t won a playoff contest since Game 7 of the 2019 Stanley Cup Final against Boston.

Things looked promising for the visitors when Jordan Kyrou’s first NHL postseason goal off a terrific feed from Ivan Barbashev tied the game in the second period and seemingly gave the Blues momentum. The momentum was short-lived entering the third period.

Just 30 seconds in, Rantanen from below the goal-line passed to MacKinnon in the near slot – and MacKinnon buried it. At least two things went wrong on that play. For one, Marco Scandella needed to go in harder on Rantanen behind the net. And in front of the net, O’Reilly got over to MacKinnon late.

“I’ve gotta be the safety valve there and kind of turn my head, have my head on a swivel and see the dangerous ice,” O’Reilly said. “You know, I think it was Rantanen that makes a great pass there, but I've got to put myself in a better spot where I’m seeing and taking away the dangerous ice.

“If I do that, I get a stick on that puck and we go from there. My adjustment has to be better in there and I think it will.

It became 3-1 Avalanche eight minutes later on a Landeskog deflection of a MacKinnon shot from the blueline. The 7,741 fans in attendance waved white pom poms in appreciation.

“Both goals in the third period were preventable in my opinion,” Berube said, excluding MacKinnon’s empty-netter from the discussion.

Playing without leading scorer David Perron, the Blues managed only 23 shots on goal, but they had several excellent chances. Vladimir Tarasenko, back in the lineup after missing eight of the last nine games with an upper-body injury, clanged one off the post just four minutes into the contest.

Mike Hoffman looked to have a sure goal on a wraparound attempt against Avs goalie Philipp Grubauer, but Colorado defenseman Ryan Graves hustled back and got his stick on the shot.

“I think the part we needed to do more was get those second and third opportunities,” Bozak said. “We got a lot of skilled guys that are gonna get some chances, but if those don’t go in we need to get the rebounds, create more chances off of that.

“Get them scrambling. They have a really good goalie over there who’s had a really good season. So yeah, get traffic on him, take away his eyes as much as we can and create some havoc in front.”

On Monday, most of the havoc belonged to Colorado.

St. Louis Blues center Ryan O'Reilly shoots the puck at the net in the first period of Game 1 of an NHL hockey Stanley Cup first-round playoff series against the Colorado Avalanche, Monday, May 17, 2021, in Denver. (AP Photo/David Zalubowski)