Gary Sabourin (top right) and Bill McCreary of the Blues battle behind the net as Montreal Canadiens goalie Rogie Vachon gloves the puck in a Stanley Cup Final game at St. Louis Arena in May 1969. (AP Photo) 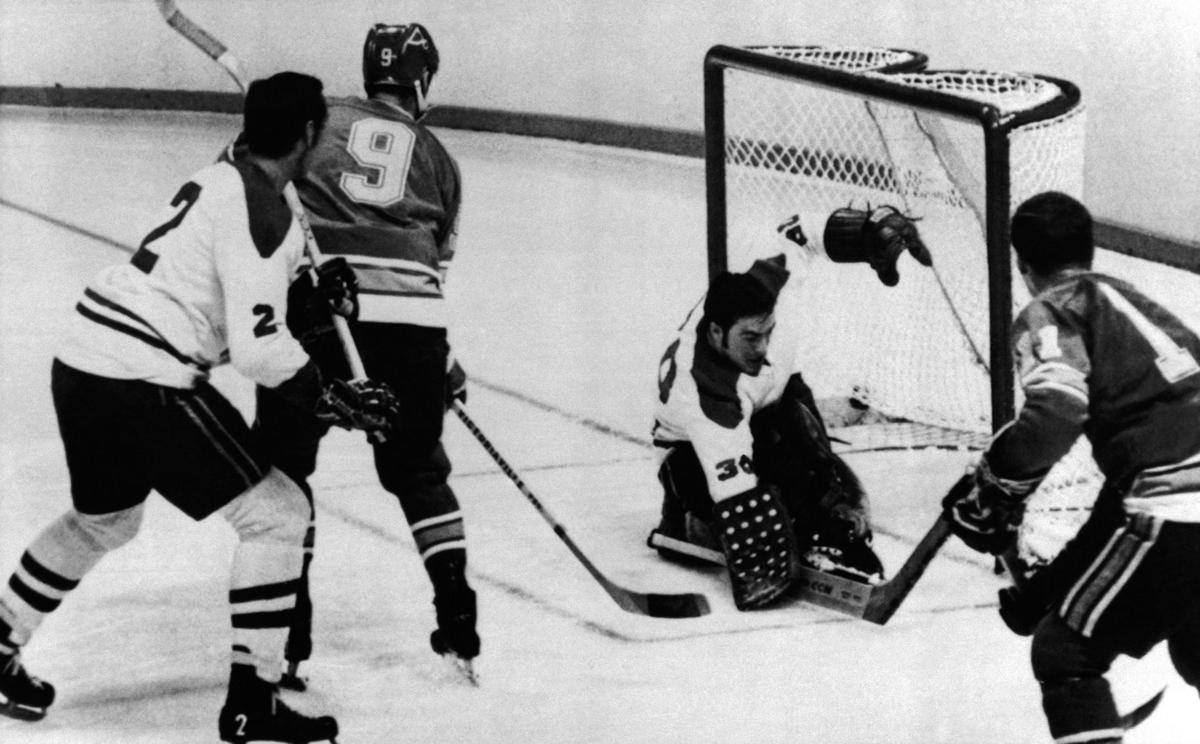 The Blues' Gary Sabourin, right, and Frank St. Marseille look for a rebound in a Stanley Cup Final game against Montreal. 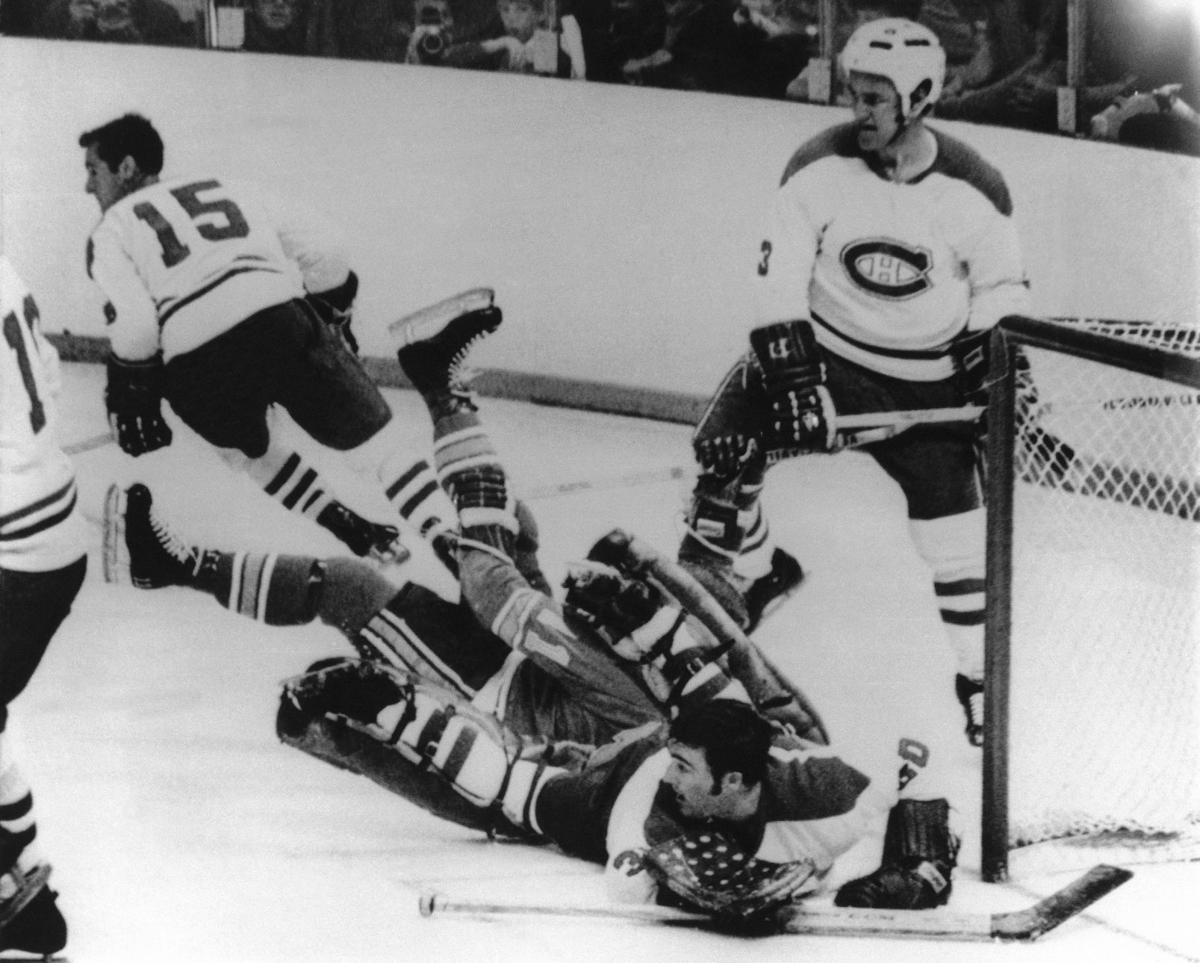 Hockey writer Jim Thomas continues our "Where are they now?" series on former Blues.

Gary Sabourin was back home in Britt, Ontario, in the summer of ’67 working at his uncle’s marina. A radio on the dock was tuned in to the NHL expansion draft for the six teams joining the league that fall.

“Well, I never heard my name all day,” Sabourin recalled. “And I thought, ‘Oh my God, I can’t believe I’m not being drafted by somebody.’

“I was just dumbfounded. I thought for sure I’d get picked up by somebody, because my last year in the Central Hockey League (for the Omaha Knights) I had 23 goals and 100-some minutes of penalties.”

Sabourin and the other marina workers were getting ready to call it a day when his name came up on the radio. Shortly after the conclusion of the expansion draft, Sabourin was traded from the New York Rangers’ organization (along with Bob Plager, Tim Ecclestone, and Gordon Kannegiesser) for defenseman Rod Seiling — whom, oddly enough, the Blues had picked earlier in the day from the Rangers in the expansion draft.

“My wife and I were really excited, and then next thing we know we got a telegram from the Blues saying ‘we’re happy that we could get you,’ ” Sabourin said.

He had been stuck in the minors, in the Rangers’ system for three years. And the pay wasn’t great — $3,500 a year during Sabourin’s first pro season.

“I told them I could make more in the mines up in Sudbury, and they said, ‘Well, go ahead,’” Sabourin said.

He kept playing hockey. Then came that life-changing telegram from the Blues.

“So that was the start of I think the three greatest years of my NHL career,” Sabourin said “First year you’re there, you’re in the Stanley Cup finals against the Canadiens. Even when you break into the league, I’m looking at players across from me that I watched on television. It was kind of scary at first, but you have to pull your socks up, and say, hey, I got a job to do.”

Sabourin played seven seasons at forward in St. Louis, made two All-Star games, and as one of the “Original Blues” made the Stanley Cup Final in each of the first three seasons of the franchise’s existence.

“It’s still a great feeling that some people remember us,” said Sabourin, now 76. “Most of us were just down-to-earth guys from a little town. Hardly had any money. We couldn’t believe how popular we were in (St Louis). It was a fantastic experience.”

Called up from the Blues’ minor-league affiliate in Kansas City on Dec. 4, 1967 — his 24th birthday, Sabourin scored 13 goals as a rookie. Not bad at all. But after the season, the Blues told him he needed to do better finishing his scoring opportunities.

So here’s what he did: He bought 100 pucks from the minor hockey organization in Parry Sound — the legendary Bobby Orr’s home 45 minutes north of Britt. And he shot pucks every day into a backyard net. But there’s more. His uncle (from the marina business) had purchased an old railroad bridge that was about to be demolished.

The timbers on the train trestle were held together with huge bolts. Sabourin took a nut from the end of a bolt and slid it down his hockey stick where the shaft met the heel.

“The nut might have weighed two pounds,” Sabourin said.

Taking countless shots over the course of the summer, the added weight strengthened his wrists.

“My shot really improved just by doing that,” Sabourin said. “I can remember the first few days of practice. Glenn (Hall) or Jacques (Plante), whoever it was in goal, said ‘What the hell happened to you?’”

His goal total nearly doubled in his second NHL season, from 13 to 25, beginning a stretch in which the player known as “Sabby” averaged 23 goals over five seasons.

But his Blues’ joyride ended after season No. 7. Sabourin had knee problems much of that season.

“I had went to them in January and said there’s something wrong with my knee,” Sabourin said. “They just kept saying, ‘you’ve extended your knee.’ But there were serious problems with it and I was still trying to play, and I just couldn’t do it.”

He also had issues with Lou Angotti, who replaced Jean Guy Talbot as head coach late in the season.

“I don’t want to talk bad about anybody, but it didn’t work out when they brought Angotti in. And he wasn’t there very long, so. . .” Sabourin said. “But he started sitting me out (in favor of younger players).”

With a struggling team that was about to miss the playoffs for the first time, the frustration boiled over for Sabourin. After being a healthy scratch March 23 in Montreal, Sabourin checked out of the Blues’ hotel and didn’t accompany the team to Philadelphia.

“Sabourin Jumps a Sinking Ship” was the Post-Dispatch headline in beat writer Gary Mueller’s story chronicling the controversy. Although Sabourin was not officially suspended, Angotti kept him off the ice for the final five games of the season. Two months later came the Toronto trade.

Toronto doctors quickly diagnosed Sabourin as having torn cartilage; three knee surgeries followed, which shortened his career. He played only three more years, including a 21-goal season with the California Golden Seals in 1975-76.

After hockey, Sabourin and wife Nancy owned a bakery — Buns Master — in southern Ontario for nearly 30 years, with his three daughters and sons helping.

“It was a lot of midnight shifts, early morning,” Sabourin said. “It was the hardest thing I think I ever had to do.”

A fire in a nearby meat store engulfed the small plaza where the bakery was located. The store destroyed, Sabourin decided at age 66 it was time to retire.

“The whole plaza went down,” Sabourin said. “A hell of a lot worse could’ve happened. Nobody got hurt.”

The Sabourins still live in Chatham, Ontario, which is where they had the bakery. There’s a family cottage on the Georgian Bay of Lake Huron north of Chatham. When they want to escape winter, they have a place in Punta Gorda, Fla., on the Gulf of Mexico.

Former Blues linemate Frank St. Marseille has a place a couple hours away on the Atlantic side in Lake Worth. They hook up whenever possible in Florida.

“It’s worked out really good,” Sabourin said. “I didn’t think my retirement would be this much fun.”

Not bad for someone whose family had no television, no car, no running water and thus no indoor toilet facilities growing up in Britt.

“I was very inattentive in school, very bad,” Sabourin said. “All I wanted to do was play hockey, and I’m lucky I hit the right cycle.”

Otherwise, he might have spent a lot more time working at his uncle’s marina.

“When I was younger that was sort of the plan,” Sabourin said.

The Blues had other ideas.

Thomas and Timmermann on the Blues: Where are they now?

Gary Sabourin (top right) and Bill McCreary of the Blues battle behind the net as Montreal Canadiens goalie Rogie Vachon gloves the puck in a Stanley Cup Final game at St. Louis Arena in May 1969. (AP Photo)

The Blues' Gary Sabourin, right, and Frank St. Marseille look for a rebound in a Stanley Cup Final game against Montreal.