Five of the seven injured Blues’ players were on the ice for an optional skate Thursday morning before the team’s Central Division showdown with the Nashville Predators at Enterprise Center.

Missing from Thursday’s skate were defenseman Scott Perunovich (shoulder), who’s been a regular at practice recently, and forward and captain Ryan O’Reilly, who’s not expected back for some time due to a broken foot.

“Good to get some guys back into the group a little bit,’’ Blues coach Craig Berube said. “Certain guys can do more than others, but they’re all coming, making progress. Some of them are getting close.”

The coach said he have to talk to Tarasenko about his progress, but said, “I think he’s probably close to telling me when he’ll play, what game.’’

Berube said that forward Nikita Alexandrov, a late scratch before sitting out Tuesday’s 2-1 win over Ottawa with an upper-body injury, will be given another day to recover. That means Nathan Walker will get a start on the fourth line.

“The standings are tight and it looks like it’s going to be a battle down the stretch,’’ Nashville coach John Hynes said after his team’s morning skate Thursday. “We’ve played some good, consistent hockey the last 15, 20 games, but we’re still trying to build our game, to be consistent and give ourselves the best chance to win.”

“The Blues have obviously had some injuries, but they’ve played some good hockey,’’ Hynes said. “They’ve come together, played hard and they’ve found a way to fight hard and get some wins. And we expect nothing different tonight.”

“As the season progresses, things get tighter and tighter. You’ve got teams fighting for playoffs. Games are going to be hard.”

With the Blues struggling to keep up in the standings and only 13 games remaining before trade deadline, roster changes seem almost inevitable.

With three straight losses and trade deadline looming, Blues season is on the brink

A scoreless game midway through the contest degenerates into a 5-0 loss to lowly Arizona.

In trying to turn the corner on the season, Blues hit another wall in frustrating loss to lowly Chicago

Despite outplaying Chicago early, the Blues fell behind 2-0 in the opening period and played catch-up all night in a 5-3 loss.

Quick hits: Blues collapse in the desert, lose 5-0 to Coyotes

Team also losses Robert Thomas to lower-body injury in falling to .500 for the season.

The switch has resulted in a pair of lines capable of driving play at five on five, and given Robert Thomas and Jordan Kyrou a boost after eight straight games of playing with Pavel Buchnevich.

Quick Hits: Blues miss another chance to get four games above .500, lose to Chicago

Blues fall behind 2-0 in first period and never catch up.

The Blues pulled within 4-3 early in the third period, but could not tie the game despite a 6 on 4 power play in the final two minutes.

Forward Vladimir Tarasenko and defenseman Torey Krug practiced again with the Blues on Monday, meaning a potential return could follow one night later.

Blues welcome Torey Krug, Vladimir Tarasenko and Logan Brown back to the liineup, but winger Pavel Buchnevich will be sidelined several games due to injury. 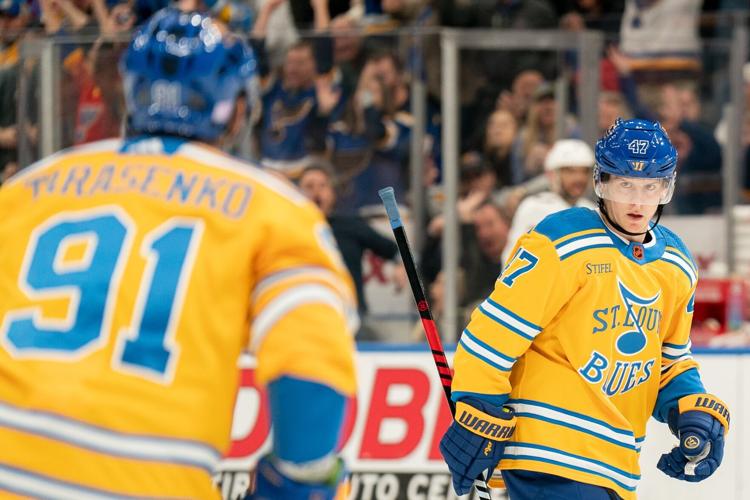 Blues defenseman Torey Krug looks over at teammate Vladimir Tarasenko after Krug scored a goal against the Capitals on Thursday, Nov. 17, 2022, at Enterprise Center. 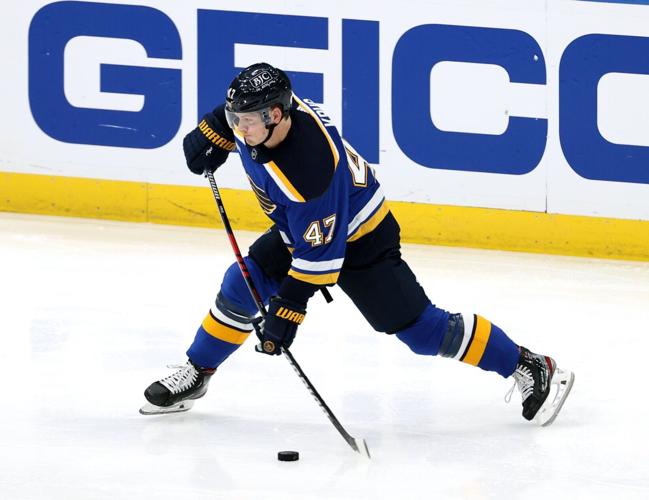 Blues defenseman Torey Krug shoots the puck in the second period during a game against the Oilers at Enterprise Center on Wednesday, Oct. 26, 2022.