Blues GM Doug Armstrong acquired him as protection against a potential Alex Pietangelo exodus via free agency. Sure enough, Pietrangelo left and Faulk replaced him as the team’s cornerstone defender. He upgraded his offense this season, scoring at a 51-point pace after scoring at a 37-point clip last season. More power-play usage and offensive zone starts helped that process. Faulk still played the body (149 hits) and blocked shots (101) at the other end. His strength 5-on-5 was reflected in his plus-41 rating, and he played nearly 26 minutes per game in the playoffs.

He settled into his role the as the No. 1 power-play quarterback quite nicely. Krug’s deployment (71 percent offensive zone starts) mirrored his usage in Boston and he responded by scoring at a 55-point pace with a plus-23 rating. He scored nine goals this season after scoring just two last season and he produced 15 points in his last 17 games. But he couldn’t stay healthy. After recovering from an upper body injury late in the regular season, he suffered a knee injury in the postseason.

We all expected the Blues to add a physical defenseman before the trade deadline, but Armstrong landed the puck-moving Leddy (and his minus-33 rating) from the Red Wings instead. The trade paid off as Leddy slid smoothly into the Blues’ defensive mix and assumed a Top 4 role. He contributed eight points and a plus-3 rating in 20 regular season games and five points with a plus-4 rating in the playoffs. More importantly, Leddy used his skating ability to upgrade the Blues’ defensive zone coverage.

He had a rough Game 6 in the Colorado series, but don’t let that color the assessment of him. Overall Parayko made great strides since his injury-marred 2020-21 season. He set career highs for playing time (23:33 average in regular season), defensive zone starts (63 percent) and blocked shots (169). Parayko struggled earlier this season, then got stronger as the season wore on. He earned a plus-32 rating in his last 38 games. He tied his career-best scoring rate (0.44 points per game) overall despite getting just token power-play time.

He endured and up-and-down, injury-marred season. Scandella started very well, fell off, got hurt, came back strong...and got hurt again. For much of the stretch run he regained his shutdown role while earning a plus-14 rating in 25 games in March and April with increased playing time. He finished with a plus-17 rating overall and a career-high 106 hits in 70 games. At his best, he is worth every bit of his $3.275 million salary cap hit. But he played hurt during the postseason and wasn’t great in his limited role in four games.

First a shoulder injury derailed his career. Then a wrist injury knocked him out. Perunovich had an impressive start with the Blues this season in his puck-moving role before suffering a classic rookie fade. He regrouped by dominating at the AHL level with his playmaking skill, scoring 22 points in 17 games for Springfield. Injuries forced him to hustle back from his wrist injury to lend a hand for the Blues in their postseason run. Perunovich earned four assists in seven games and did an admirable job running the power play in Krug’s absence.

He earned a two-year, two-way contract to stick around as depth defenseman who can provide injury insurance. His 18 Blues games this season (with two goals and five assists) was his longest NHL stint in his five professional campaigns. Rosen isn’t physical, but he reads the play and skates well enough to defend at this level. He is sound with his puck management and he has good feel at the offensive end — as he demonstrated with 24 assists in 40 AHL games this season. He averaged 14:28 of ice time in nine playoff games and held up OK.

This man will hurl his body in front of any shot. He blocked 98 of them this season while playing less than 14 minutes per game. He took one off the skull, then returned to battle undaunted. Bortuzzo is also the most combative Blues defenseman, the guy most likely to go out of his way looking for trouble. But his skating leaves him at a disadvantage in the increasingly fast-paced NHL game and he often struggles to advance the puck from the defensive zone. With a $950,000 cap hit for the next two seasons, he is a right-priced depth defender moving forward.

His first full NHL season was quite an adventure. At times he was up in the Top 4 filling a shutdown role and at times he was a healthy scratch. He was minus-7 in January, plus-10 in February, minus-7 in March, and mostly benched in April. Injuries forced him into the postseason fray and he held up OK while playing 15:39 per game. That put a positive finish on his uneven season. The Blues love his size and willingness to play with an edge — he had 109 hits in 54 games — but he must become more consistently sound with his puck management.

Try as he might, he could never muscle into regular work in this defensive corps. When he played, it was in a sheltered third-pairing role without power-play or penalty-killing duty. His excellent skating did not translate into offensive production (six points in 32 games this season). He was neither a physical presence nor a great shot blocker at the defensive end. Finally the Blues moved him to the Red Wings in the Leddy trade, giving him a chance to advance his career in a bigger role.

Check out all of Gordo's year-end Blues report cards

Timmermann chat: The parade may have passed Klim Kostin by

Check out the full transcript of Tom Timmermann's live chat with Blues fans.

What do the numbers tell us about the Blues' 2021-22 season? A breakthrough scoring season for some, a season spent going between the AHL and NHL for others.

DENVER — The Tampa Bay Lightning spoiled Colorado’s party and remained in the hunt for a third straight Stanley Cup title, beating the Avalanc…

The Springfield (Mass.) Thunderbirds, the Blues' AHL affiliate, starts play for the Calder Cup on Sunday afternoon against the Chicago Wolves.

Timmermann chat: Should the Blues try to keep Husso?

TAMPA, Fla. — The Colorado Avalanche are back atop hockey’s mountain after dethroning the two-time defending champions.

Several forwards, including Tarasenko, Perron and O'Reilly earn strong grades, while Sundqvist and Kostin were disappointments. 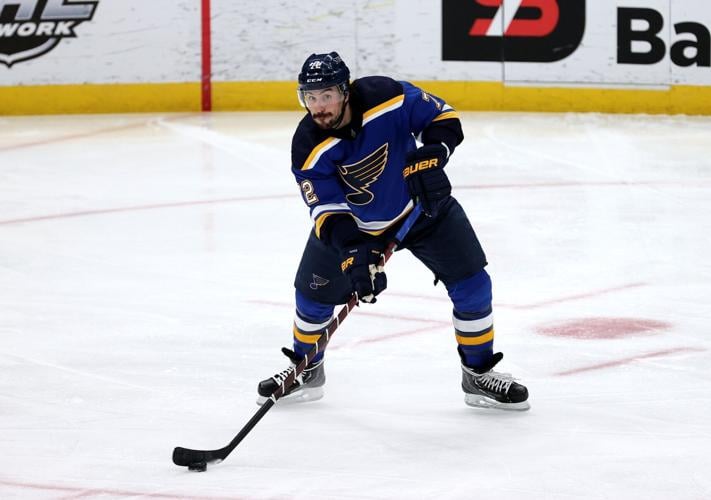 St. Louis Blues defenseman Justin Faulk (72) passes the puck in the third period during an NHL game between the Minnesota Wild and St. Louis Blues at Enterprise Center in St. Louis on Friday, April 8, 2022. Photo by David Carson, dcarson@post-dispatch.com 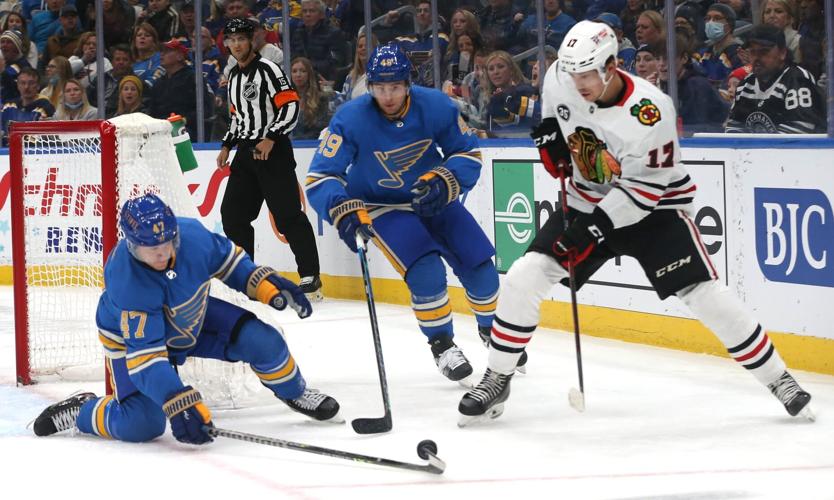 Blues defenseman Torey Krug (47) slides to his knees to defend the puck from Blackhawks center Dylan Strome (17) during second period action in a game between the St. Louis Blues and the Chicago Blackhawks on Saturday, Feb. 12, 2022, at Enterprise Center. Photo by Laurie Skrivan, lskrivan@post-dispatch.com 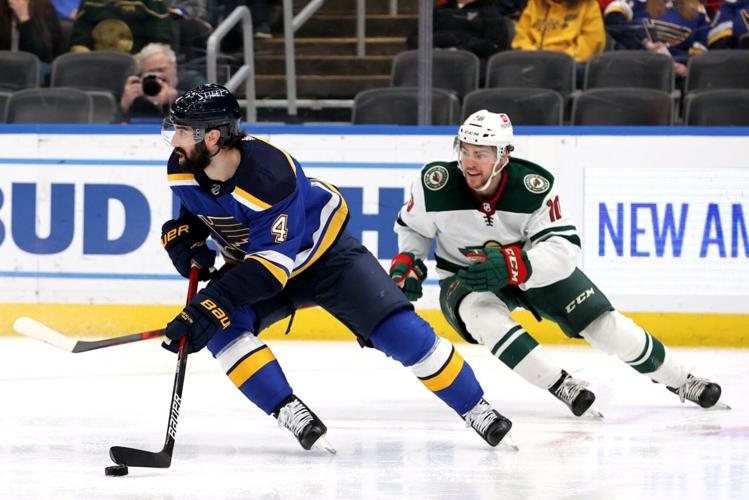 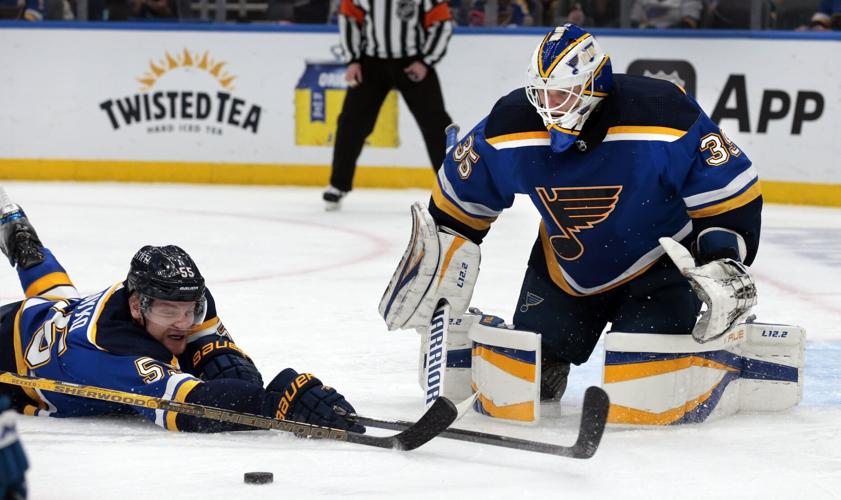 Blues defenseman Colton Parayko helps goalie Ville Husso with a loose puck against the Colorado Avalanche during the second period of Game 4 of the second round of the 2022 Stanley Cup playoffs at Enterprise Center on Monday, May 23, 2022. 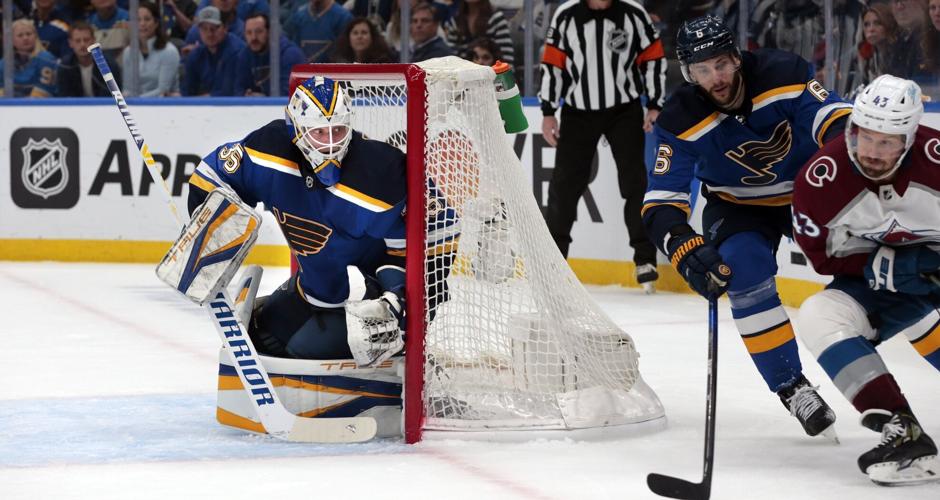 St. Louis Blues goalie Ville Husso defends as Marco Scandella works against Colorado's Darren Helm during the second period of Game 6 of the second round of the 2022 Stanley Cup playoffs at Enterprise Center on Friday, May 27, 2022. Photo by Robert Cohen, rcohen@post-dispatch.com 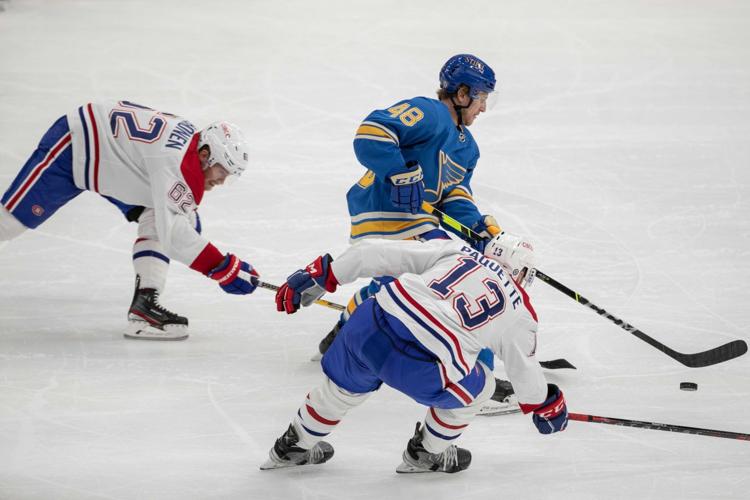 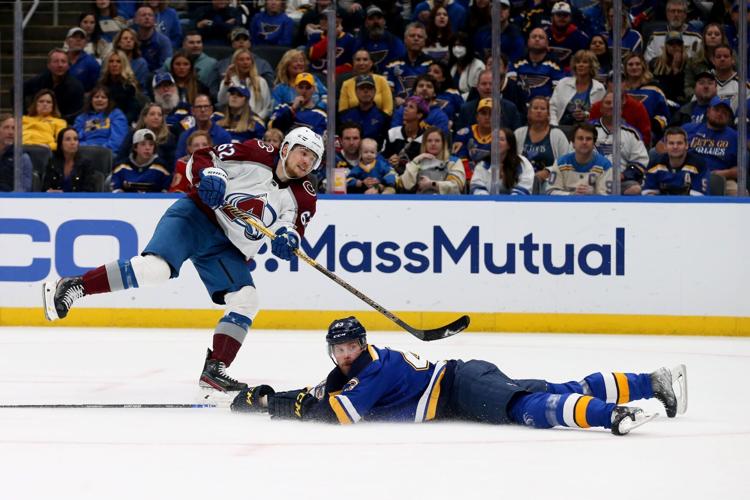 Colorado Avalanche forward Artturi Lehkonen (62) shoots and scores over a sliding St. Louis Blues defenseman Calle Rosen (43) during second period action of Game 3 of the second round of the 2022 Stanley Cup playoffs at Enterprise Center on Saturday, May 21, 2022. Photo by Laurie Skrivan, lskrivan@post-dispatch.com 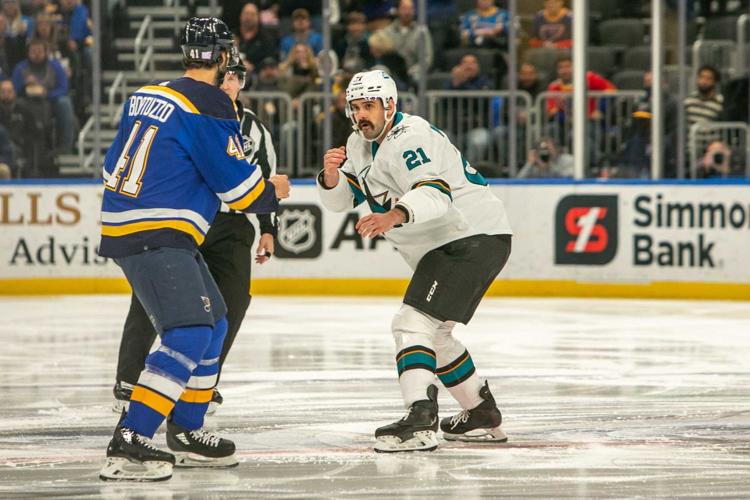 St. Louis Blues defenseman Robert Bortuzzo (41) and San Jose Sharks defenseman Jacob Middleton (21) squre up for a fight after the first puck drop during the first period a game against the San Jose Sharks at Enterprise Center in St. Louis on Thursday, Nov. 18, 2021. The Blues beat the Sharks 4-1 to improve their record to 9-5-2. Photo by Daniel Shular, dshular@post-dispatch.com 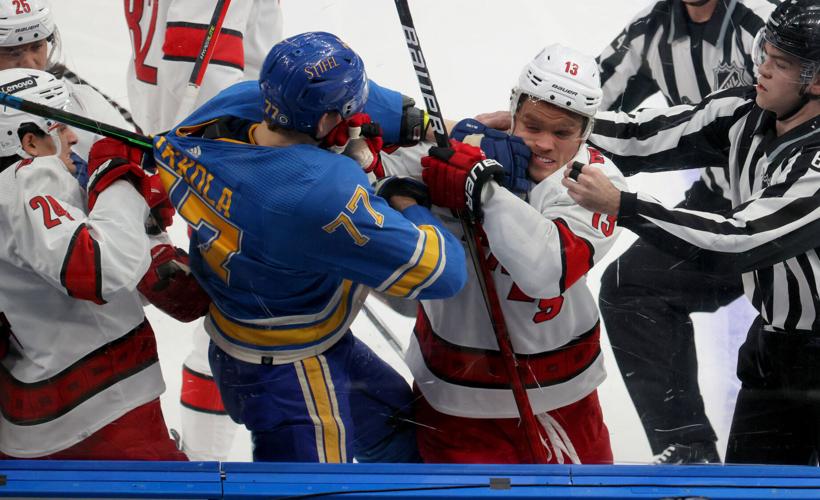 Blues left wing Niko Mikkola and Hurricane center Max Domi square off on Saturday, March 26, 2022, in the second period of a game at Enterprise Center in St. Louis, Mo. Photo by Christian Gooden@post-dispatch.com 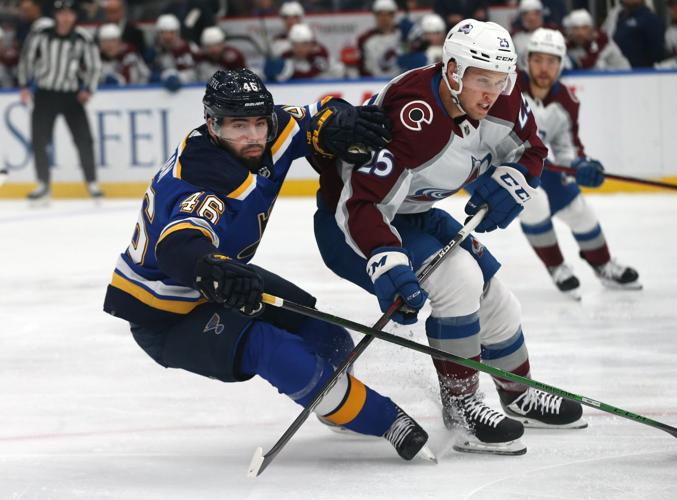