Halak on track for return, Blues say
0 comments
Share this
{{featured_button_text}}
1 of 2 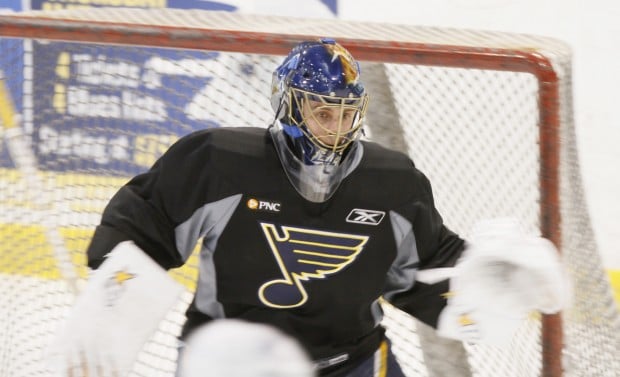 Blues goaltender Jaroslav Halak during a practice session at St. Louis Mills on April 11, 2012, before the team's first-round playoff game against the San Jose Sharks. Photo by Chris Lee, clee@post-dispatch.com 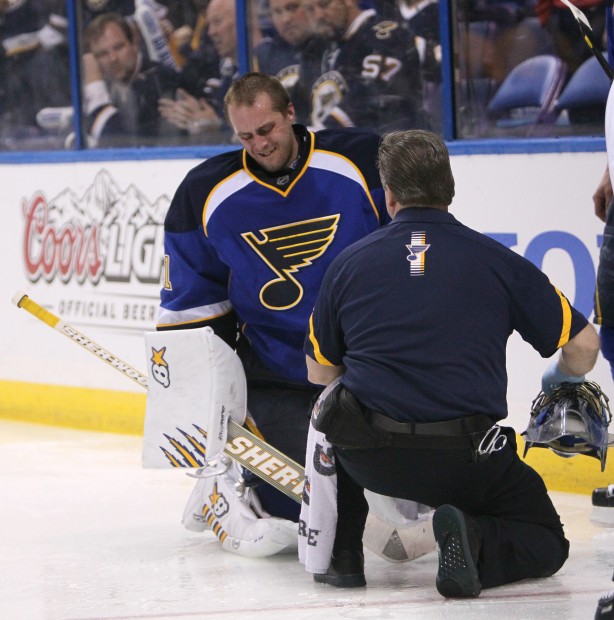 Blues goaltender Jaroslav Halak is tended to by trainer Ray Barile after teammate Barret Jackman collided with him in second period action during a first-round playoff game between the St. Louis Blues and the San Jose Sharks on April 14, 2012, at the Scot Photo by Chris Lee, clee@post-dispatch.com

Unfortunately for the Blues, Jaroslav Halak's high-ankle sprain came in the first round of the NHL playoffs. That the injury happened at the end of the season, however, could also be considered the bright side.

Three months after Halak left the ice in Game 2 of the Blues' series against San Jose, he is still not 100 percent recovered from teammate Barret Jackman inadvertently barreling into him in the crease.

The Blues referred to it only as a lower-body injury during the playoffs and ruled Halak out two games at a time to avoid distraction. But following the club's second-round loss to Los Angeles, team officials acknowledged that Halak had suffered a high-ankle sprain on his left leg.

The injury, which has a history of lingering on with professional athletes, is defined as a "disruption of thick connective tissue between the tibia and fibula above the ankle joint."

In June, the Blues listed "early July" as the target for Halak to be cleared for activity, but now Saturday is the date that has been set for him to be cleared.

"He's still experiencing a little bit of ... I don't want to say pain, but a little discomfort when he does some movement," Blues general manager Doug Armstrong said. "The injury lingers, and for a goalie, because of the movement that's necessary, it takes a little longer than maybe for a skater. But we've had a lot of time on our hands, so it hasn't been an issue. We expect him to be cleared by July 21 and he thinks he'll be ready to go. He's not coming back (to St. Louis) until August, so we're happy with his progress."

Halak is home in Slovakia, where he spends his summers. He returned to the U.S. last month to attend the NHL Awards show in Las Vegas, where along with teammate Brian Elliott, the duo received the Jennings Trophy for allowing the fewest goals-against in the league during the regular season. The Blues evaluated Halak's status at that time, and then earlier this month, the club sent trainer Ray Barile to Slovakia, where he checked on the goalie.

Armstrong said that the trip to Slovakia didn't stem from any concern regarding Halak, but rather is "normal practice" for an organization that sends club officials to visit European-based Blues each offseason "to connect with the players." (Last summer, Blues strength and conditioning coach Nelson Ayotte and goaltending coach Corey Hirsch traveled to Slovakia to meet with Halak.)

While the three-month rehab has almost certainly affected Halak's offseason conditioning program, Saturday's projected clearance will give him two months to prepare before the scheduled start of training camp in mid-September. There is potential for a delay in the start of the 2012-13 season because of the expiration of the collective-bargaining agreement Sept. 15, but even if training camp begins on time, Armstrong believes that Halak will be ready.

"I'm 100 percent comfortable that within probably a week he'll be cleared and be ready to go by training camp," Armstrong said. "We're in a good spot right now with that injury ... so there should be no issues."

The Blues are expected to employ a rotation of Halak and Elliott again in 2012-13. A year ago, Halak played in 46 games, winning 25, and Elliott played in 38, winning 23. Elliott turned in nine shutouts and Halak six, tying the NHL's post-expansion record of 15 shutouts.

The two goalies appeared to feed off each other during the regular season, which is why Halak's absence in the playoffs was a costly one.

Elliott rose to the occasion in the first round, helping the Blues oust the Sharks in five games, but faltered in the second round, being asked to start a season-long string of seven games. Some speculation centered on a possible injury to Elliott, but he wouldn't confirm that after the season.

In the American Hockey League, prospect Jake Allen and recently signed AHL veteran Mike McKenna, a St. Louis native, will patrol the pipes in Peoria next season. The addition of McKenna means that prospect Paul Karpowich will play with the Blues' ECHL affiliate in Alaska.

"We now have five goalies under contract, which I think is really important," Armstrong said. "Obviously our NHL guys have excellent experience coming off great years. We like the way Jake progressed last year, so we think our goaltending is real solid."

But deal is still possible before Friday; team says it is not expecting hard feelings to result.

Sky appears to be the limit for David Perron

If Blues’ forward stays healthy, he’s capable of putting up 60 to 70 points.

Defenseman already is in town, looks for big things from Blues.

Relax, fans. Stillman, other investors have the money to keep Blues on an upward trajectory.

Blues goaltender Jaroslav Halak during a practice session at St. Louis Mills on April 11, 2012, before the team's first-round playoff game against the San Jose Sharks. Photo by Chris Lee, clee@post-dispatch.com

Blues goaltender Jaroslav Halak is tended to by trainer Ray Barile after teammate Barret Jackman collided with him in second period action during a first-round playoff game between the St. Louis Blues and the San Jose Sharks on April 14, 2012, at the Scot Photo by Chris Lee, clee@post-dispatch.com