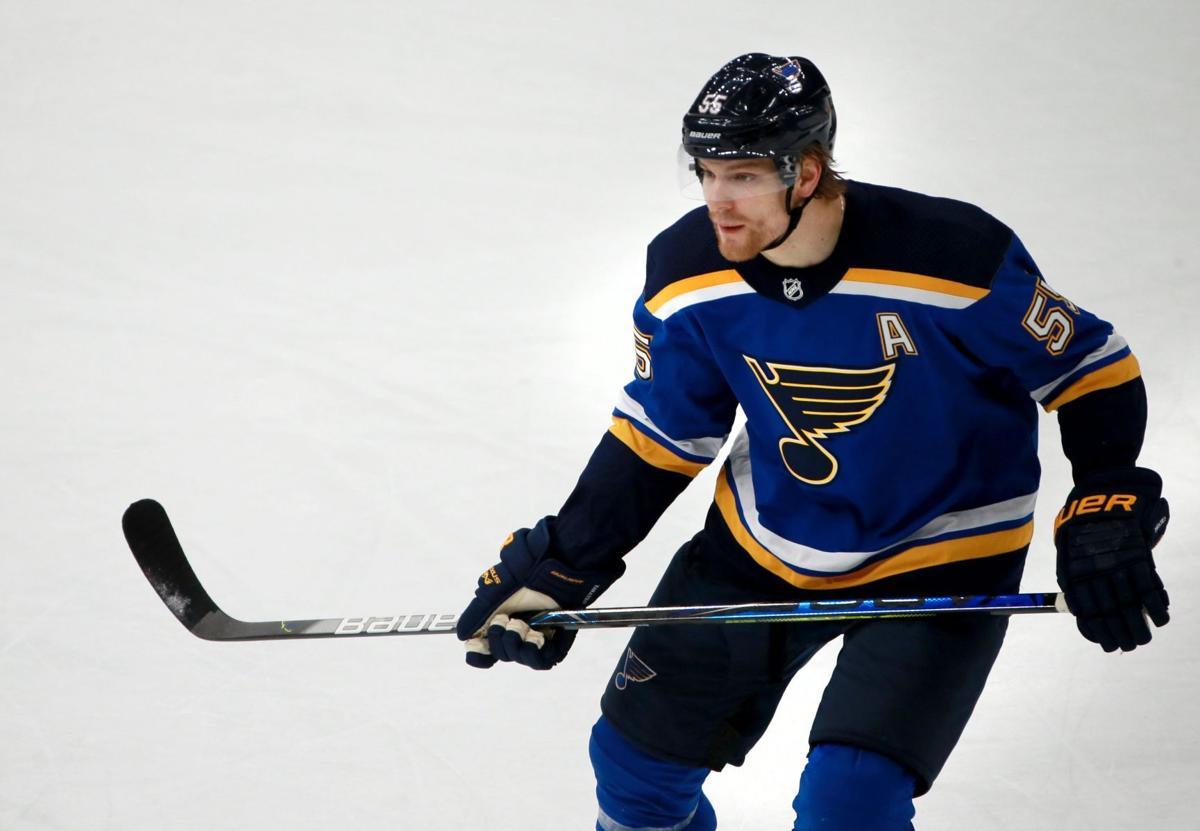 Blues defenseman Colton Parayko on Sunday, Jan. 10th, 2021, posts up in the third period of a scrimmage game at Enterprise Center in St. Louis. Photo by Christian Gooden, cgooden@post-dispatch.com 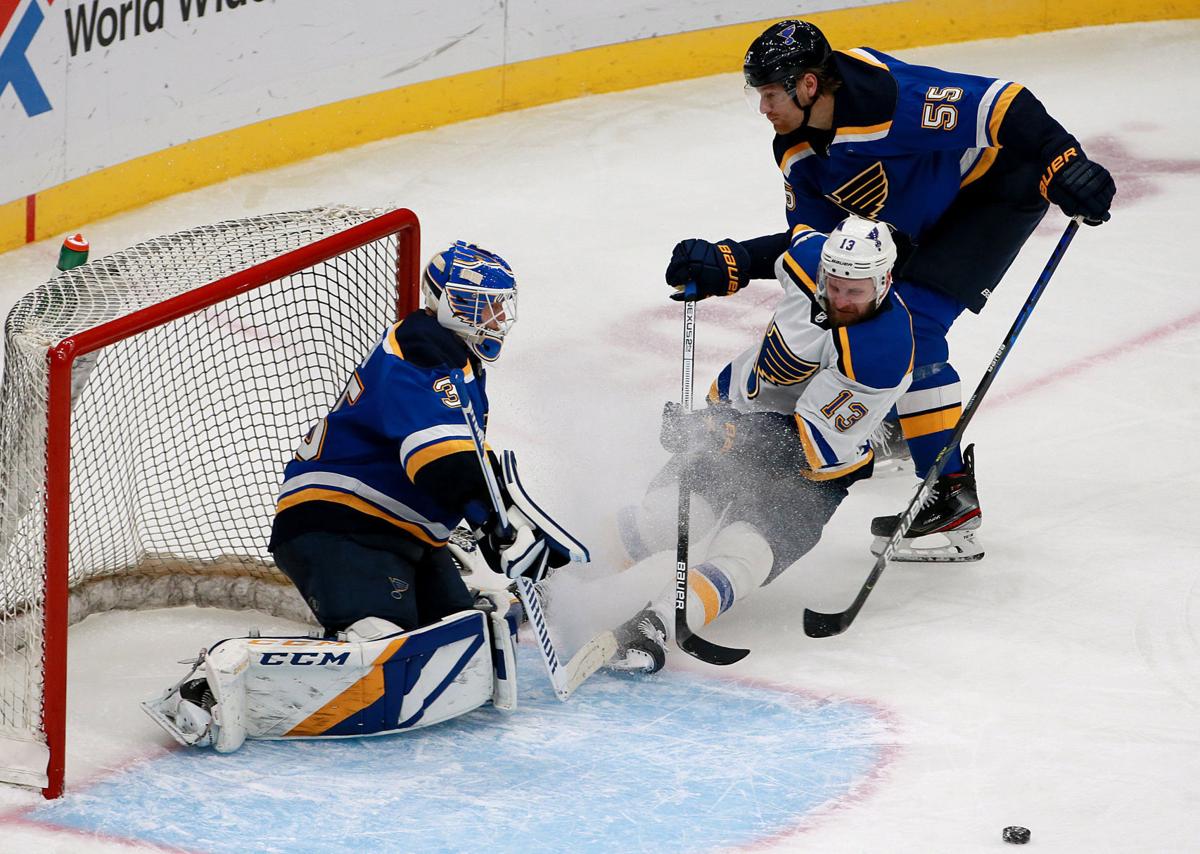 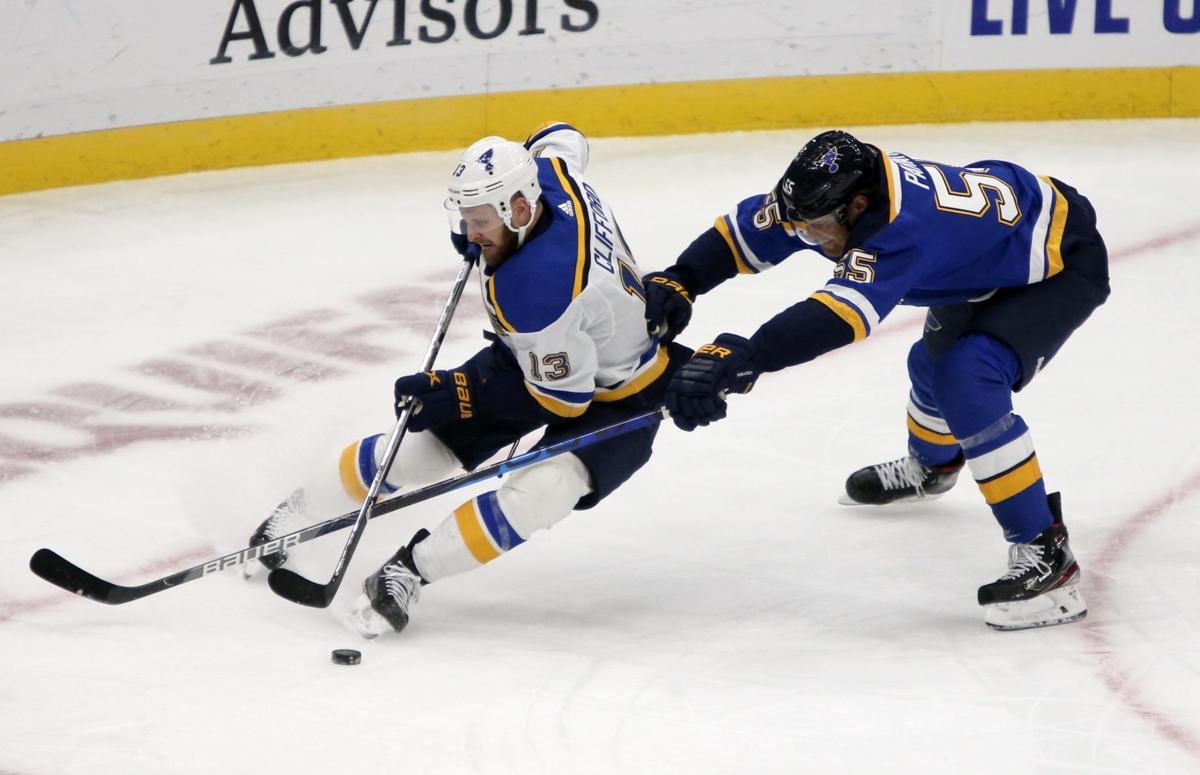 St. Louis Blues left wing Kyle Clifford (13) and St. Louis Blues defenseman Colton Parayko (55) battle for the puck during the third period of a scrimmage at Enterprise Center in St. Louis on Sunday, Jan. 10, 2021. The Blues will play their first game of the season Jan. 13 against the Colorado Avalanche. Photo by Christine Tannous, ctannous@post-dispatch.com 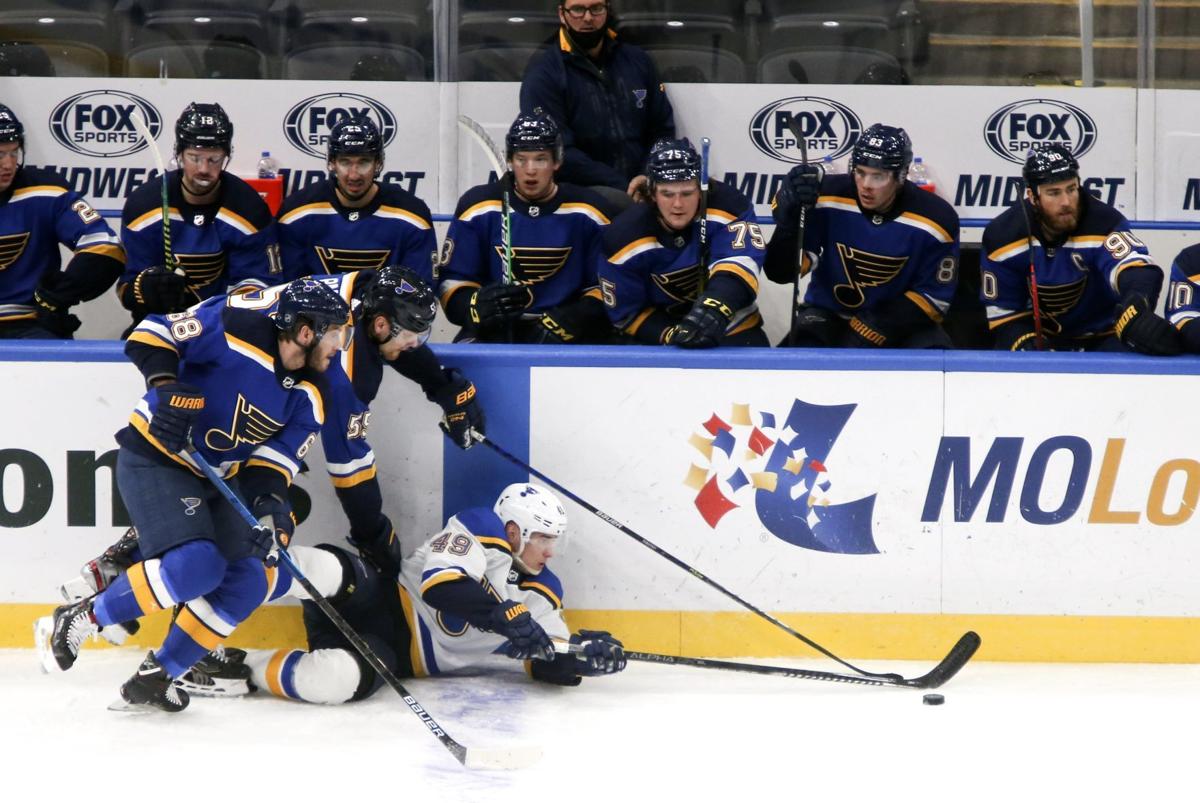 St. Louis Blues center Ivan Barbashev (49), left wing Mike Hoffman (68) and defenseman Colton Parayko (55) during a scrimmage at Enterprise Center in St. Louis on Sunday, Jan. 10, 2021. The Blues will play their first game of the season Jan. 13 against the Colorado Avalanche. Photo by Christine Tannous, ctannous@post-dispatch.com

This is it. After five years in the NHL, and very much in the prime of his career at age 27, this is Colton Parayko's big moment. With Alex Pietrangelo's decade-long run in St. Louis at an end, the spotlight shines bright on the native of St. Albert, Alberta.

It's Parayko's turn to be the No. 1 defenseman on what has been one of the NHL's better defenses for years.

"With Petro being gone, I think his role enhances for sure, which I think he will do a great job of elevating to," captain Ryan O'Reilly said. "He's a huge piece of this team, and it's exciting to see him getting more opportunities."

It's almost as if the new "A" on Parayko's jersey as alternate captain actually stands for "Ascending."

Will Parayko reinvent himself? Will he suddenly morph into a 50-60 point defenseman?

Probably not. The expectations are high, but Parayko has been playing at a high level for a while. So please forgive coach Craig Berube if his goals for the big blueliner are simply: "He just needs to go and play his game."

For starters, Parayko has been very close to being the team's No. 1 defenseman the past two seasons. If Pietrangelo, now a member of the Vegas Golden Knights, was No. 1, then Parayko was 1A.

Little-known fact: Parayko — and not Pietrangelo — led the Blues in even-strength ice time in each of the past two seasons. Parayko has been second in overall ice time both years only because Pietrangelo got significantly more time on the power play.

And here's a tired narrative: Parayko needs to shoot more. While that may have been true earlier in his career, that's no longer the case.

Only Pietrangelo and David Perron took more shots than Parayko last season, when he averaged a career-high 6.2 shots per game. In the Stanley Cup season of 2018-19, Parayko finished fourth on the team in shots, averaging 5.7.

Sure, there's still room for improvement and growth. To a degree, that's true for every player. But for the most part, Berube and general manager Doug Armstrong want Parayko to just be ... Parayko.

"Yeah, you can always improve a little bit," Armstrong said. "I think the subtle changes are gonna be the ones that take place now (in Parayko). I'm not sure it's gonna be like a transformation where he's getting 60 or 70 percent more points."

And more from Berube: "I don't think he needs to change anything from what he's already doing. He's gotta go be a good player, be a good defender like he has been, and use his big body. He does a great job with that kind of stuff, and he's scored some big goals for us for sure.

"But just because you put an 'A' and a 'C' on a person's jersey, you don't want them to think they gotta do way more because that's not the case. He's got an 'A' on his jersey because he's an extremely hard worker. He's a great person and a leader. Hard worker on the ice, off the ice.

"He exemplifies the Blues, in my opinion — how he carries himself and handles himself on and off the ice."

With or without Pietrangelo, with or without an 'A' on his sweater, that's the Parayko that Blues fans will see this season. He'll just be under more scrutiny.

"Ever since I got in the league, I wanted to continue to get better each year I'm here," Parayko said. "That's still my mindset. There's always room for improvement in my game and anyone's game, I guess, for that matter.

"So come to the rink, continue to get better. Just do my game. That's what I do best, is play big, be hard to play against, and move the puck."

Even so, the one area we should see more of Parayko this season is on the power play. He averaged only 46 seconds a game there last season, ranking 12th on the team. There were 18 games in which he didn't appear on the power play at all; 13 others when he logged fewer than 30 seconds.

Based on what's transpired in camp, it looks like Paryko will open on the second power-play unit with Vince Dunn, Jaden Schwartz, Tyler Bozak and Robert Thomas. For any player, more power-play time is the surest way to increase your point total. Parayko had 10 goals and 18 assists in each of the past two seasons, pretty good numbers but not in Pietrangelo territory.

When it comes to 5-on-5 play, being paired with a puck-mover and accomplished passer in Torey Krug also could help Parayko's offensive production.

Visually, they're an odd couple with Parayko at 6 feet 6 towering over the 5-9 Krug.

"We have a couple other small guys, too, but I don't know who else would be his size," Parayko said. "He's not the tallest guy, I guess."

The long and the short of it is that Parayko and Krug could be a dynamic pair on the blueline. After having "defensive" defensemen as partners the past couple of years in Jay Bouwmeester and Marco Scandella, Krug is a different kind of beast for Parayko.

"Right from the time I met him and since camp started, we've bonded well," Parayko said. "We've been over a lot of different things in terms of hockey-wise and different reads.

"Obviously, each player reads different scenarios a little differently. Coming from different teams, they have different systems and what-not. It's just kind of getting used to each other. ... So it's been good. I'm excited to play with him."

Last year for Boston, Krug was paired with 6-5 Brandon Carlo, so he's used to looking up to his D-partner. No disrespect to Carlo, but after signing a seven-year, $45.5 million free-agent contract with St. Louis, Krug is paired with a more talented player.

"He's so long," Krug said of Parayko. "He skates so well. Two or three strides, and he's up the ice. He forces a lot of turnovers from the other end. It just looks like an easy game out there for him."

But if the expectation is making fans forget about Pietrangelo, well, that's easier said than done.

Blues 2021 season preview: Team eager to put 2020 in the past, return to league's elite

The night the goalies brawled in St. Louis

On Jan. 23, 1993, Curtis Joseph pummeled Detroit goalie Tim Cheveldae in a wild brawl 54 seconds into a 4-3 victory over the Red Wings at The Arena.

Another good series start for Blues with win over Kings

Krug, Dunn, Perron and Schwartz get first goals of season in 4-2 win.

Busy Blues face a hectic schedule over next 3½ weeks

Starting Saturday, they play six games in nine days and 14 games in 24 days.

Practice update: Scandella back for noisiest practice of season

Defenseman missed Wednesday's game with upper-body injury; Berube expects him to play vs. Kings on Saturday

Blues defenseman Colton Parayko on Sunday, Jan. 10th, 2021, posts up in the third period of a scrimmage game at Enterprise Center in St. Louis. Photo by Christian Gooden, cgooden@post-dispatch.com

St. Louis Blues left wing Kyle Clifford (13) and St. Louis Blues defenseman Colton Parayko (55) battle for the puck during the third period of a scrimmage at Enterprise Center in St. Louis on Sunday, Jan. 10, 2021. The Blues will play their first game of the season Jan. 13 against the Colorado Avalanche. Photo by Christine Tannous, ctannous@post-dispatch.com

St. Louis Blues center Ivan Barbashev (49), left wing Mike Hoffman (68) and defenseman Colton Parayko (55) during a scrimmage at Enterprise Center in St. Louis on Sunday, Jan. 10, 2021. The Blues will play their first game of the season Jan. 13 against the Colorado Avalanche. Photo by Christine Tannous, ctannous@post-dispatch.com