Cardinals coach Willie McGee, concerned about family and health, opts out of season

In case you've forgotten: A refresher course on the regular season
0 comments
Share this
Subscribe for $3 for 3 months
1 of 7 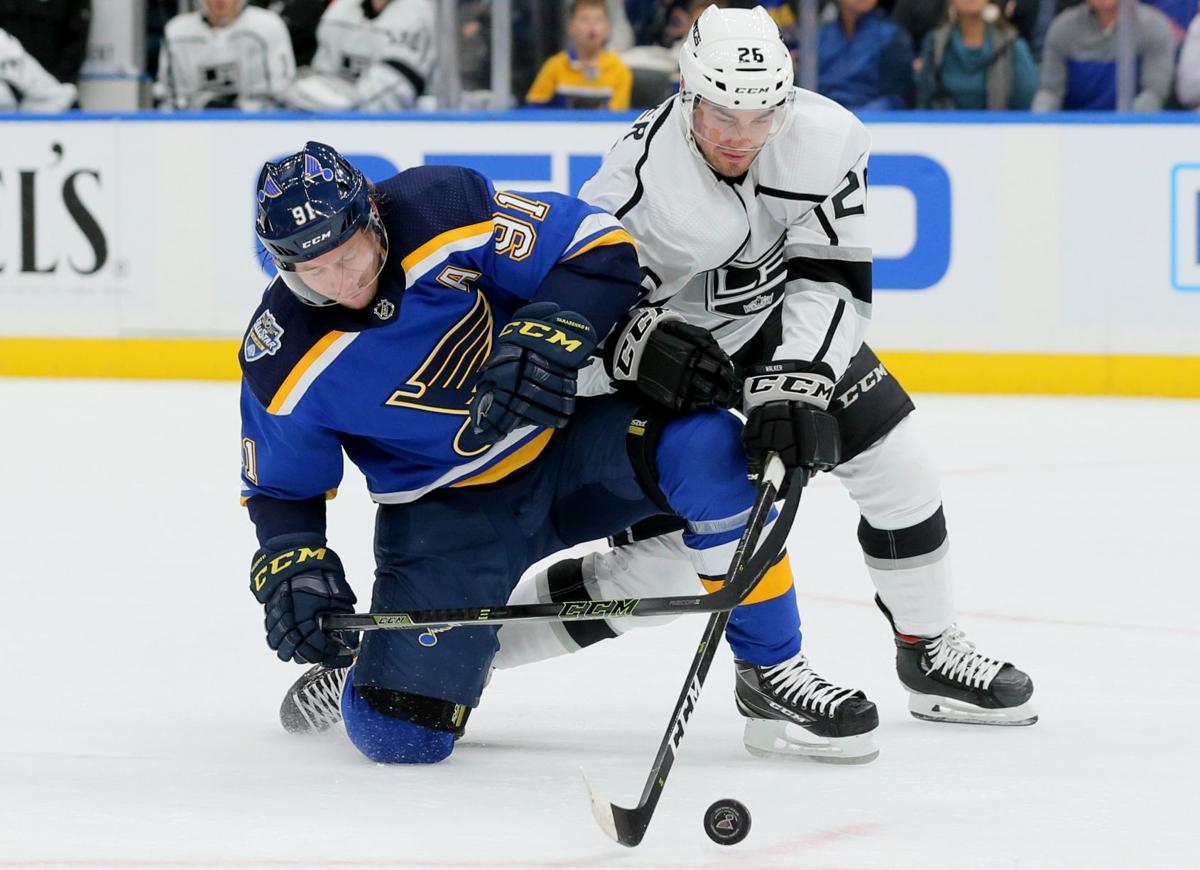 Blues forward Vladimir Tarasenko was injured on this play, as he fought for the puck against Los Angeles Kings defenseman Sean Walker in the Oct. 24 game at Enterprise Center. (Post-Dispatch photo by David Carson) 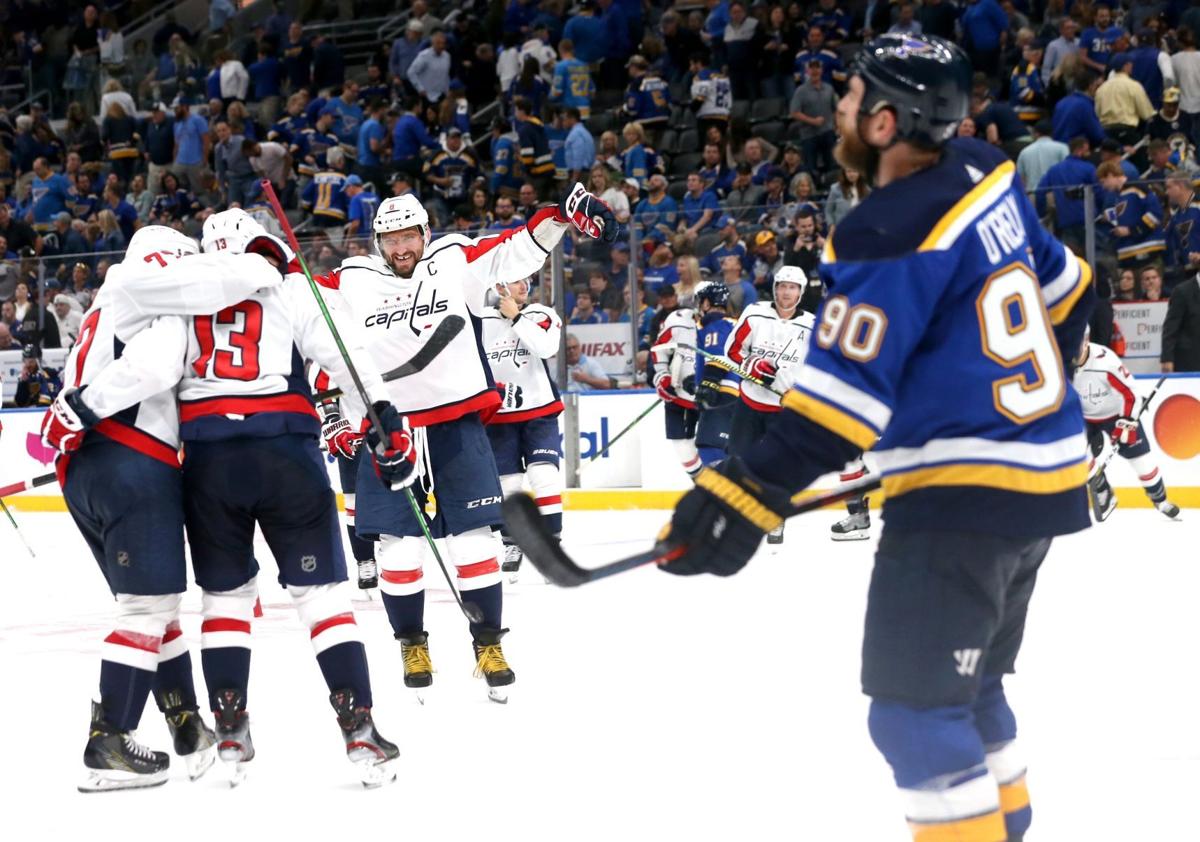 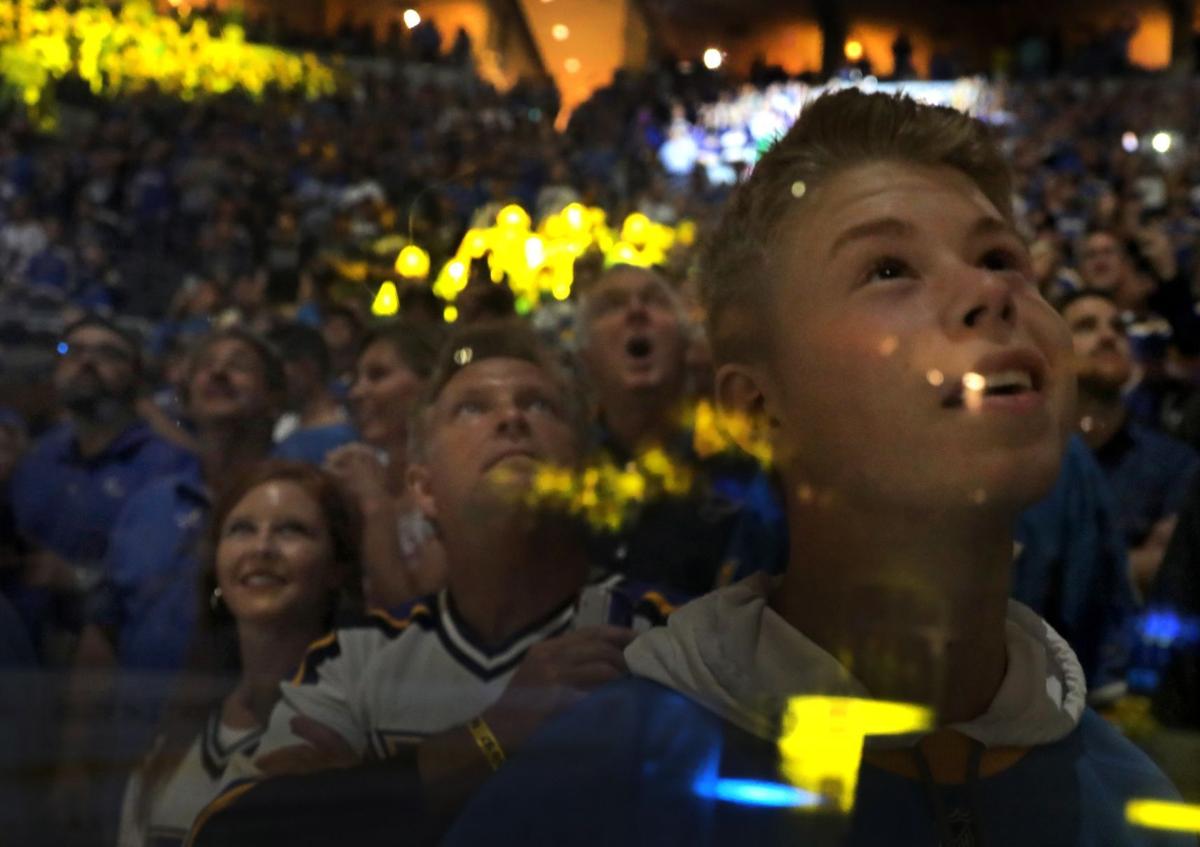 Fans watch with smiles and jaws wide open as the St. Louis Blues raise their Stanley Cup championship banner for their 2018-2019 season before the start of the season opener against the Washington Capitals on Wednesday, Oct. 2, 2019 at Enterprise Center. Photo by Laurie Skrivan, lskrivan@post-dispatch.com 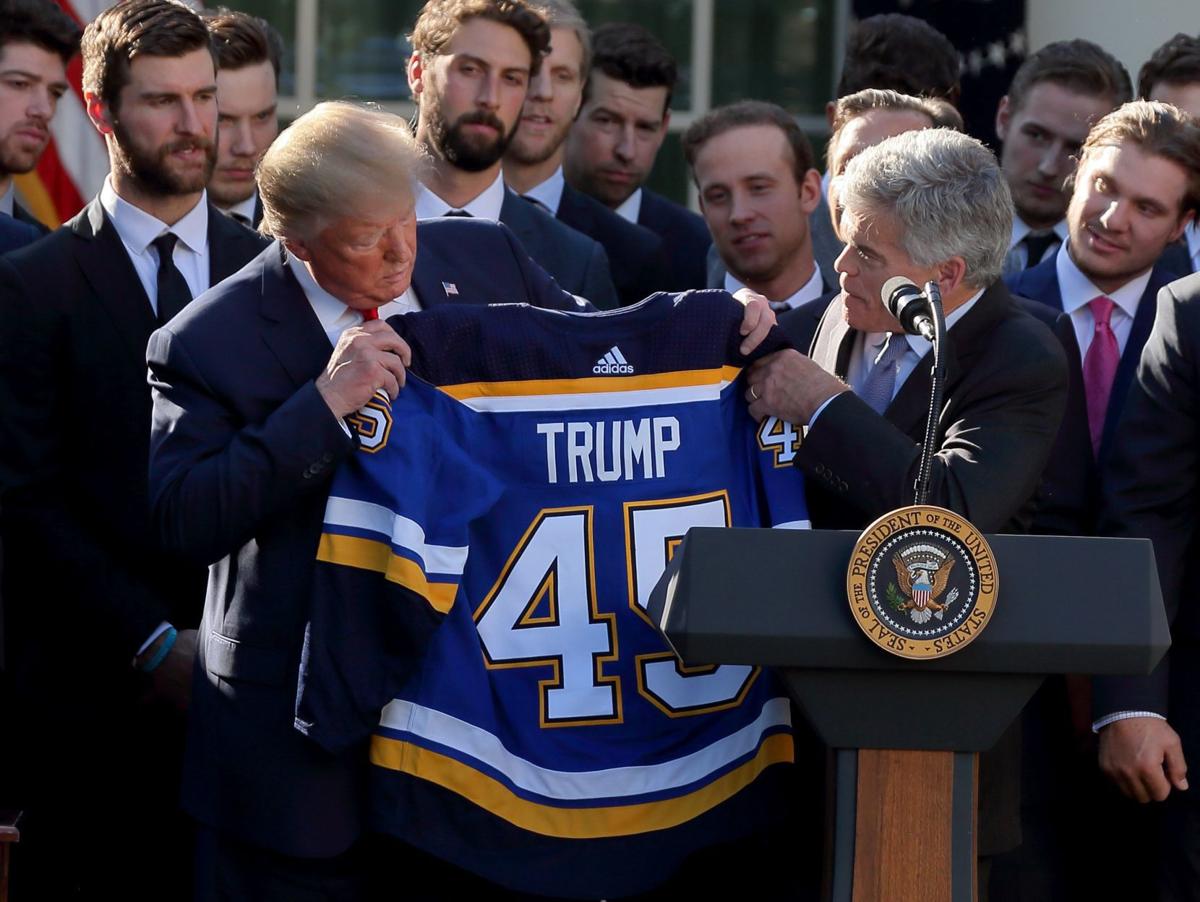 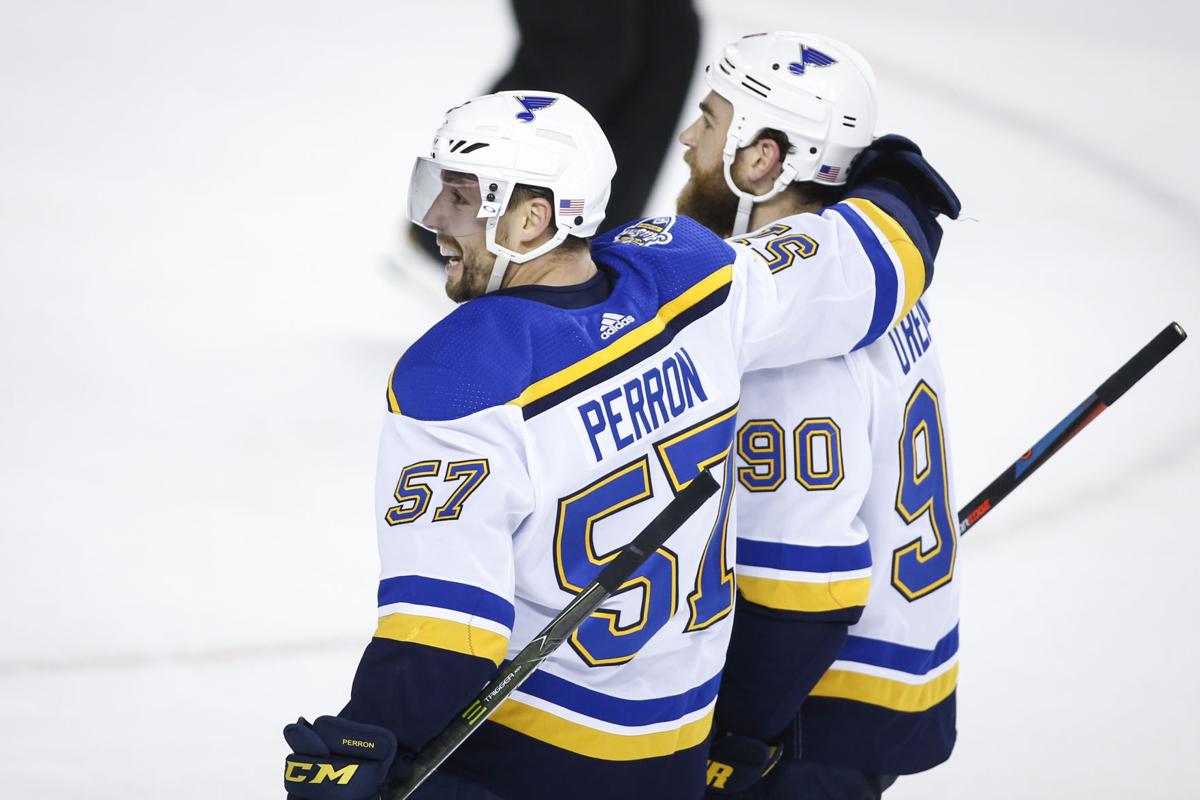 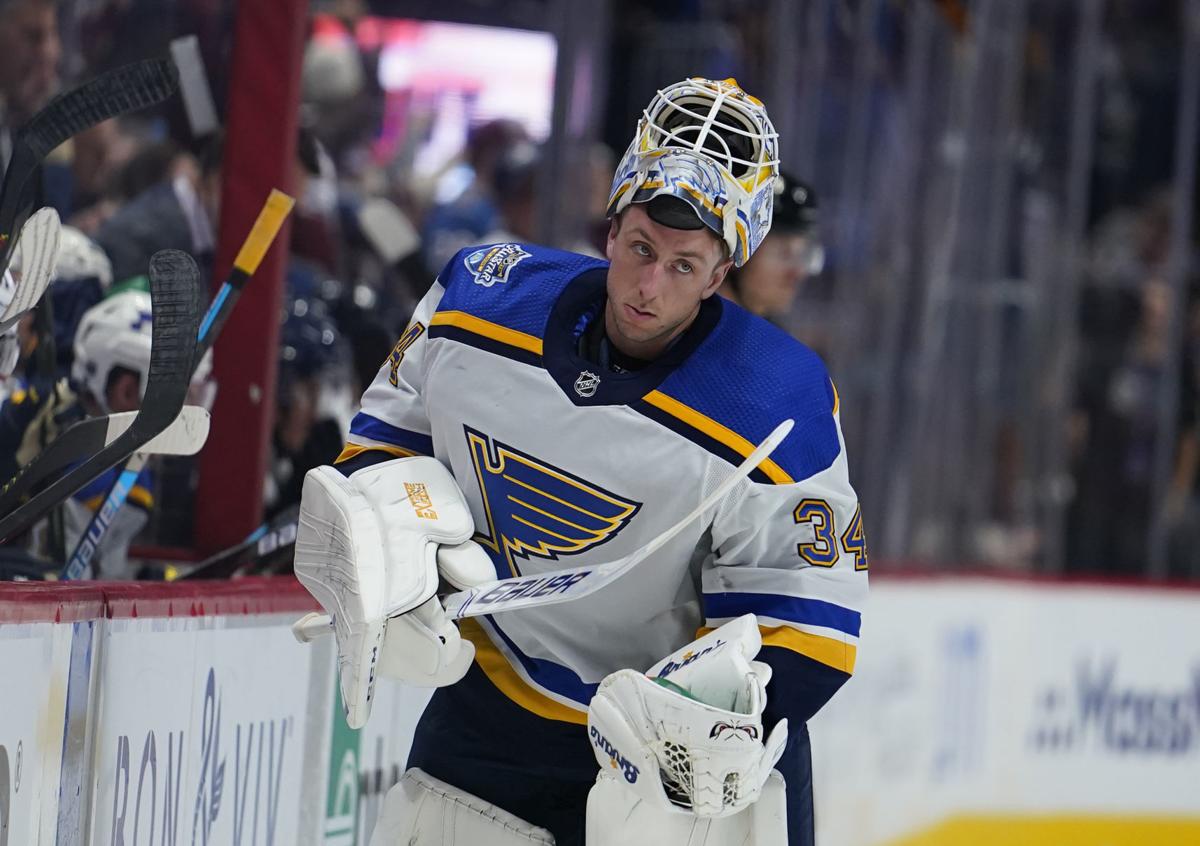 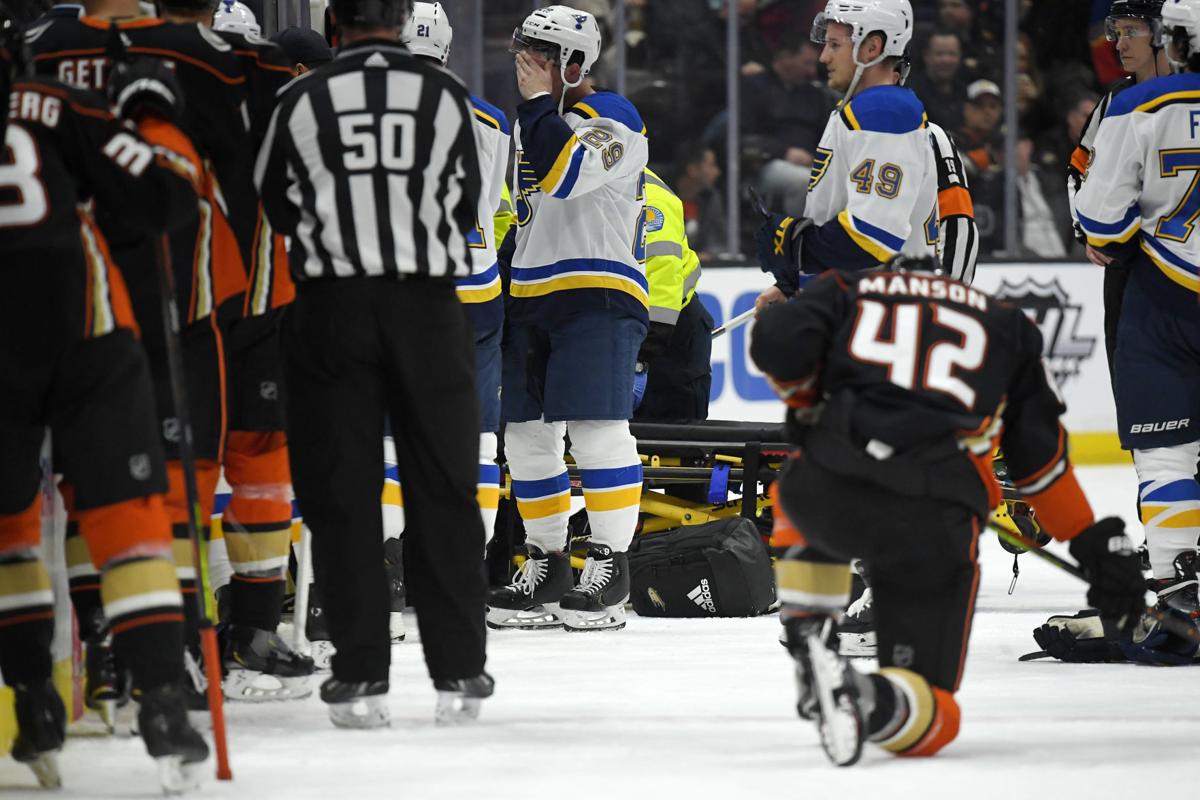 EDMONTON, Alberta — In a land far away and long ago, regular-season hockey was played. It was a time of heroes and villains. Triumph and tragedy. Promise and then plague.

More than an entire offseason has passed since the Blues last played hockey. But then came that exhibition encounter Wednesday against Chicago. And now, let the Pandemic Playoffs begin.

Their postseason starts with Sunday’s 5:30 p.m. (St. Louis time) round-robin game against the Colorado Avalanche, as they attempt once more to drink from Lord Stanley’s Cup — pandemic willing.

It’s been a while. Remember the regular season? The thrills and chills, the unexpected and the unthinkable. Of course you don’t. Not much of it anyway.

The Blues earned their way to a top-four playoff seed and a ticket to the NHL’s Round of 16 later in August. They had the best regular-season record (42-19-10) in the Western Conference and the second-best in the entire league.

How did they get here? Before moving on to the conclusion of the most unlikely season in hockey history, here’s a look back. A refresher course, if you will.

First came the ring presentation dinner at the Missouri History Museum, two days before the opener. The Stanley Cup rings were elaborate and massive.

“It’s like it was a trophy in itself,” center Ryan O’Reilly said.

For the first time since 1962-63, the winner of the two previous Stanley Cups met to open the season, with the Washington Capitals at the Enterprise Center on Oct. 2. The Blues raised the banner and then nearly raised the roof with two goals in the opening eight minutes, but the Capitals rallied for a 3-2 overtime win.

Following a 3-2 victory Oct. 7 over the Maples Leafs, the Blues stayed over to present one of those championship rings to the Hockey Hall of Fame in Toronto. It was the first time an entire team and its owner had been there to present a ring.

“Your goal as a player is to win, and then there’s lots of things that come with it that are nice — I guess mementos and things to remember it by,” defenseman Jay Bouwmeester said.

That was one of those times. Another of those days came Oct. 15. After a tough 3-2 overtime loss to the New York Islanders, the Blues had completed a four-game trip but had one more stop on the way back to St. Louis: the Rose Garden for a White House ceremony with President Donald J. Trump.

The surprise zinger of the day came when the normally media-shy Jaden Schwartz invited the president to some golf.

“If you want to take us on sometime, let us know,” he said.

Later Schwartz confessed: “I was nervous. I kind of blacked out. I don’t really remember what I said.”

Hot: One game into the regular season, Brayden Schenn signed an eight-year, $52 million contract extension. He then scored goals in five consecutive games — a career best — and in eight of his next nine contests.

Not: In their first seven games, the Blues squandered two-goal leads three times and lost all three in overtime or shootout.

Milestone: In that win in Toronto, Alex Pietrangelo scored the 23rd game-winning goal of his career, a franchise record for a Blues defenseman.

Remember This? Craig Berube received a bench penalty for arguing with officials about a goalie interference call against Robert Thomas. The resulting 5-on-3 power play led to a game-tying Vancouver goal midway through the third period in a 4-3 Canucks OT win. Was he surprised to get the penalty?

With the Los Angeles Kings in town Oct. 24, Vladimir Tarasenko was skating as well as he had all season. Just over six minutes remained in the first period, when he tried to get loose for a breakaway. The Kings’ Sean Walker caught him and spun him around, making contact with Tarasenko’s left shoulder. It didn’t look like much, but it was the same shoulder that needed surgery after the 2017-18 season.

Tarasenko was done for the night and didn’t accompany the team on a weekend trip to Boston and Detroit. The bad news came after they returned. He needed another shoulder surgery and would be sidelined at least five months. You could almost hear the collective groan: ”There goes the Cup.”

How in the world would the Blues make up that production?

It did. Even though the regular season ended 11 games early due to the coronavirus, a dozen Blues either exceeded or matched their goal totals from the Stanley Cup year. The team average of 3.14 goals per game was their highest for a season since 1994-95.

Hot: David Perron, aka Mr. Overtime, scored his fifth game-winning goal and his third overtime goal of the season in a 3-2 win Nov. 9 at Calgary. He became the first player in franchise history to score three OT goals in the first 20 games of a season.

Not: A healthy scratch in eight of the previous nine games, Robby Fabbri was traded to Detroit for Jacob de la Rose, learning he’d been dealt as the Blues finished off a 5-2 Nov. 6 win in Edmonton.

Remember This? There was Thunder from down Under in a 5-2 victory over Pittsburgh on Nov. 30, when Aussie Nathan Walker scored his first Blues goal and just the second of his NHL career. Fans were ready, waving an Australian flag at Enterprise.

The calendar year ended with a clunker, a 3-1 loss to Arizona on New Year’s Eve, snapping an eight-game winning streak. There was more of the same in the new year. The Blues were OK in January (4-2-2) heading into the All-Star break, then stumbled coming out of it, going 2-6-2 into mid-February.

There were some excruciating losses along the way. Like a 7-3 shellacking Jan. 2 in Colorado, in which Jordan Binnington gave up all seven goals — a career high — before being pulled. Sixteen days later, back at the Pepsi Center against Colorado, Binnington was pulled again after allowing four goals on just 11 shots in a 5-3 loss.

More road frustration came in Vegas. Just two days after the 7-3 fiasco in Denver, the Blues squandered a 3-0 lead in a 5-4 overtime loss. A Feb. 13 return trip to Nevada brought a similar result — a 6-5 OT loss in which the Blues got four goals from Zach Sanford but couldn’t hold leads of 4-2 and 5-4. The Golden Knights had four power-play goals.

Binnington went through the first slump of his young NHL career. The second Vegas game made it eight straight games in which he’d allowed three or more goals. Over a 14-game stretch, starting with a 5-4 win over Winnipeg on Dec. 27, he had a 3.42 goals-against average and a save percentage of just .883.

Hot: Tyler Bozak scored his second game-winner in three games in a 4-1 Jan. 13 victory over Anaheim, giving him six goals in his last 9 contests.

Not: Since returning from their Christmas break, through the Feb. 13 loss to Vegas, the Blues were tied with lowly Ottawa — yes, Ottawa — for the worst defense in the league with a 3.53 team GAA.

Milestone: Alexander Steen played his 1,000th NHL regular-season game Feb. 1, and it came in his hometown of Winnipeg. He was recognized by the public address announcer, there was a video tribute, and a third-period standing ovation from the fans in Bell MTS Place.

Remember This? Berube has a strong distaste for run-and-gun hockey, and this was true even after Perron’s shootout winner in a 5-4 track meet Jan. 28 in Calgary. The Blues trailed 2-1, 4-3, lost a goal on an offside challenge, and survived a penalty in OT.

“I can’t stand that hockey,” Berube said the next day. “I mean, I know a lot of people like it, but I can’t stand it. So I’m not gonna sit here and try to tell you that I like that type of hockey. I don’t. It’s not our game.”

After the events of Feb. 11 and March 11, the Honda Center will never look the same for the Blues.

On Feb. 11, the first game of the Dads’ Trip, Bouwmeester collapsed on the bench after completing a shift in the first period.

The sight of Pietrangelo and Vince Dunn frantically calling for help is lodged indelibly in the minds of those on the scene. Paramedics, trainers and medical officials ran over to the veteran defenseman and probably saved his life. After Bouwmeester was rushed to the hospital, dads wearing their son’s jerseys — including Bouwmeester’s father, Dan — waited for news outside the visitors locker room.

The next day, general manager Doug Armstrong called it “shocking” and “sobering.” Bouwmeester was OK. He underwent a procedure to monitor and control his heartbeat, but his season was done — and perhaps his career.

There was an uneasiness when the Blues returned March 11 for the makeup game in Anaheim as memories resurfaced of that night in February. But by the end of this night — a 4-2 Blues victory — there was a new concern.

During the game, news broke that a Utah Jazz basketball player had tested positive for COVID-19. The next day, on the team charter back to St. Louis, the NHL “paused” its season indefinitely due to the pandemic.

Hot: A 2-0 victory March 8 in Chicago gave the Blues a series sweep over their Central Division rivals for the first time in franchise history. Two of the four victories were shutouts with Jake Allen in goal.

Not: A 2-1 loss at Nashville on Feb. 16 gave the Predators a sweep of the season series. The Blues had only one measly point — via shootout loss the day after Thanksgiving — to show for four games.

Milestone: Two goals by Ivan Barbashev and a 17-save shutout for Binnington gave the Blues their 12th consecutive victory over New Jersey, matching a franchise record against any opponent. (The Devils avenged that 3-0 defeat and snapped the streak with a 4-2 win in Jersey 2½ weeks later.)

Remember This? Binnington righted the ship down the stretch. Over his final nine starts, he had a 1.79 GAA and a .929 save percentage. Included were back-to-back shutouts Feb. 18 against New Jersey and Feb. 20 against Arizona.

“Just a couple wins,” Binnington shrugged after the Arizona game. “We have to keep building, stay with it. It’s getting to the fun time of the year.”

Opening game of postseason is Blues' chance to find themselves

No one was happy with the preseason game, and the Avalanche are a team that gave them big problems the past two meetings; Tarasenko returns to practice

Blues forward Vladimir Tarasenko was injured on this play, as he fought for the puck against Los Angeles Kings defenseman Sean Walker in the Oct. 24 game at Enterprise Center. (Post-Dispatch photo by David Carson)

Fans watch with smiles and jaws wide open as the St. Louis Blues raise their Stanley Cup championship banner for their 2018-2019 season before the start of the season opener against the Washington Capitals on Wednesday, Oct. 2, 2019 at Enterprise Center. Photo by Laurie Skrivan, lskrivan@post-dispatch.com