It's a made-for-Hollywood story, and NHL nails it with video showcasing Cup champion Blues
0 comments
Share this
{{featured_button_text}}
1 of 3 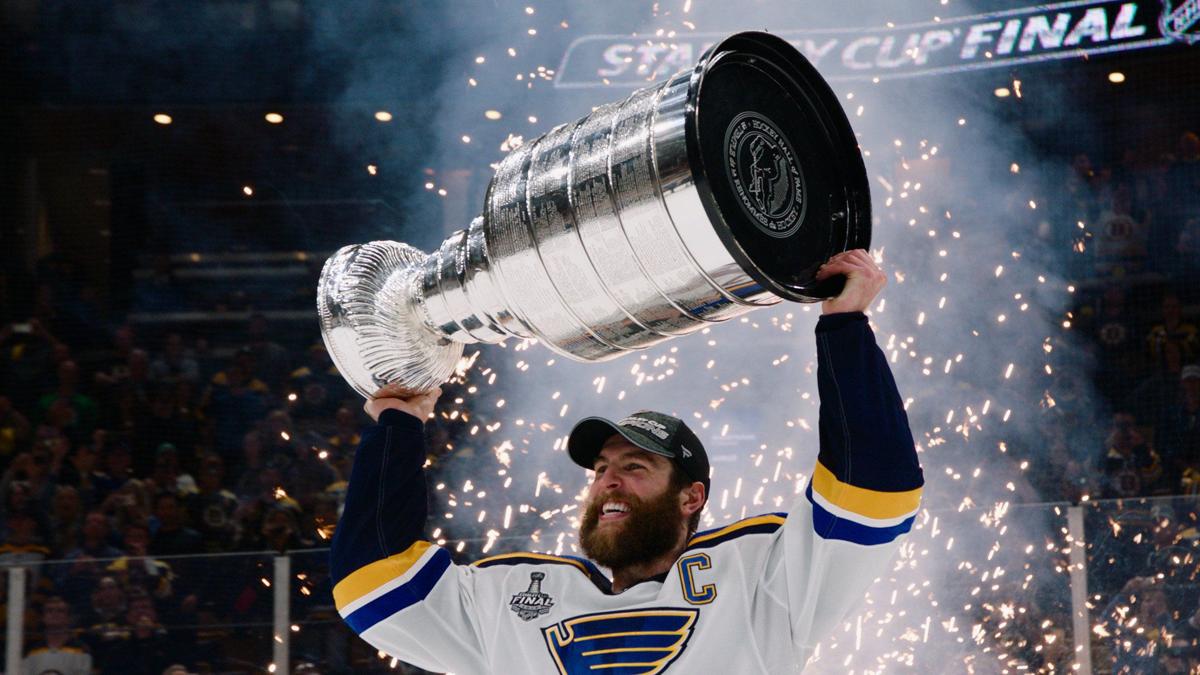 Alex Pietrangelo celebrates after the Blues won The Stanley Cup. The NHL has released a video that follows the team's journey to their 2019 championship. (NHL Original Productions) 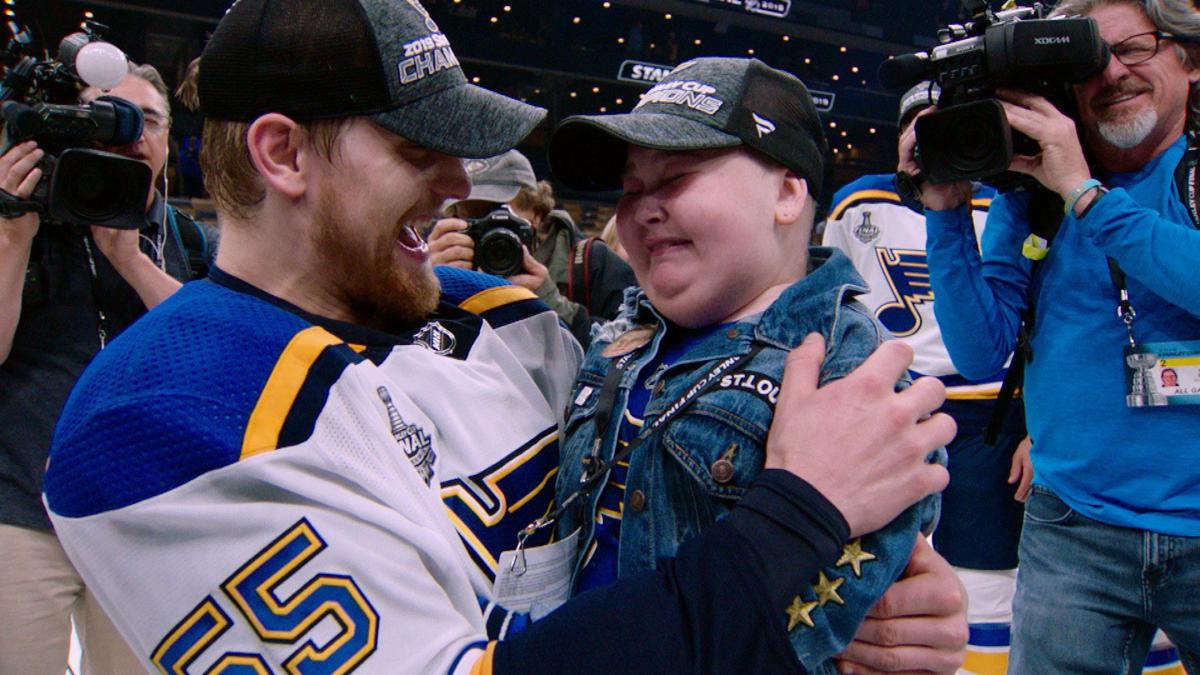 Colton Parayko and Laila Anderson celebrate after the Blues won the Stanley Cup. The NHL has released a video that follows the team's journey to the championship. (NHL Original Productions) 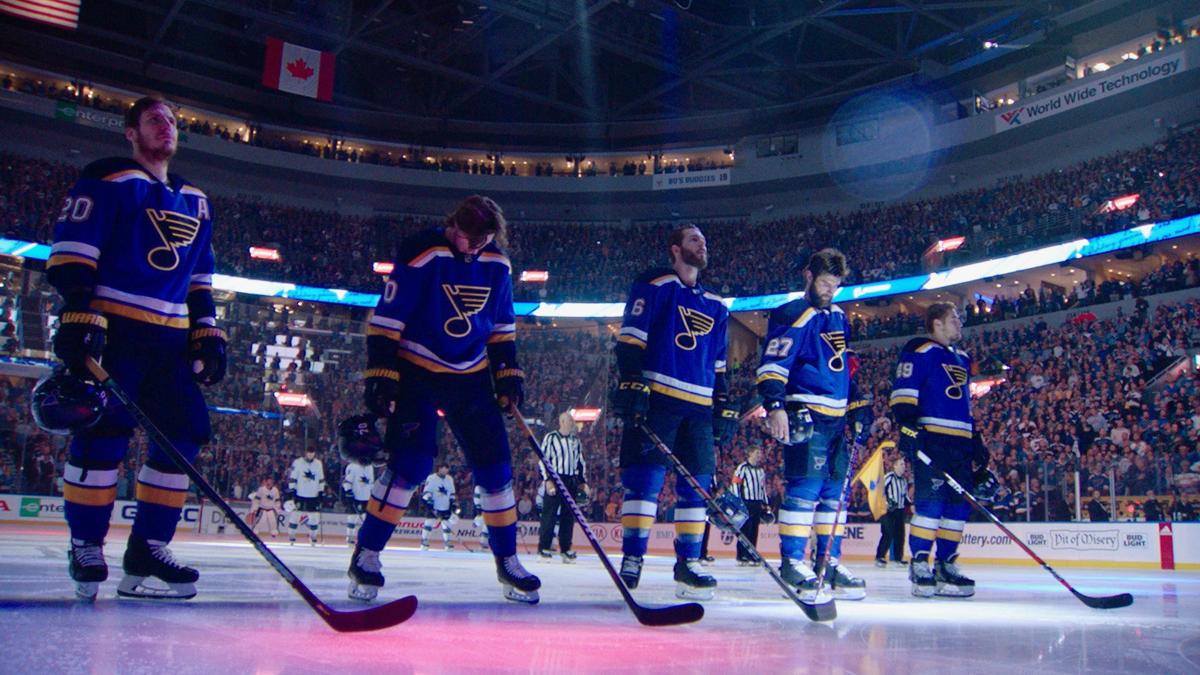 The story of the Blues’ season has been touted as the stuff of cinema, a “Rocky” or a “Hoosiers” for the salary-cap era.

A team starts with great expectations, doesn’t live up to them, fires its coach, falls to the bottom of the league standings and then, behind an interim coach, a goalie plucked from the minors and with each win being celebrated by a 37-year-old pop song, the team wins the Stanley Cup.

Along with the goalie and the coach, the cast includes a team leader who’s the new father of triplets, a veteran defenseman the city was trying to run out of town at the start of the season, a veteran forward — who, get this — is from St. Louis and scores one of the biggest goals in the team’s history and a bearded center who got the heave-ho from his previous team because he said, uh, that the team’s constant losing was frustrating and that somehow was seen as an issue.

There’s also a great scene with another veteran defenseman in a bathroom, all ending in a championship that only took 52 years for the Blues to get.

Maybe that film will someday be made in Hollywood, but first, there’s the NHL’s video of the Blues season, which was released on Tuesday. The film got a screening locally on Sunday at Stifel Theater, next door to Enterprise Center, the scene of much of the action.

Even if — spoiler alert! — viewers know that the video will end with the Blues winning the Stanley Cup, it figures to be popular in the St. Louis area, and wherever Blues fans live. It might not sell many copies in Boston, but they’ve got plenty of other championship videos to watch.

This is the second year in a row that the NHL production crew has been handed the same specific story line. In 2018, the story was the Washington Capitals’ history of disappointment coming to an end. That turned out to be just the opening act for the Blues’ often maddening history, which dwarfs that of the Capitals.

“I think it adds to the storyline for sure,” said Steve Mayer, executive producer of the video. “They’ve never had this before; this is so meaningful, and I think when you approach the production, you say, ‘What is the unique angle?’ Two years in a row, the unique angle has been teams were winning that elusive cup.”

While the video figures to become part of the collections of most Blues fans, and while all of them certainly know every twist and turn of the playoffs — that overtime in Game 3 of the San Jose series isn’t going to end well, is it? — it’s amazing that you can look at it and still spot something you didn’t already know.

In one of the interviews in the video, forward Oskar Sundqvist — who lives up to his reputation as one of the most cogent analysts of this Blues season — mentions that he didn’t feel confident the Blues, up 4-1 and with the clock running down in Game 7 of the Final, would win until there were about 20 seconds left. At that point, the film cuts to a shot of the Blues’ bench in those waning seconds, with everyone on the team leaning against the boards, ready to unleash the celebration. Except for Sundqvist, who is the last player to stand and join the crowd. (“I don’t believe we planned that,” Mayer said.)

The film can also tug at heartstrings. Laila Anderson, the 11-year-old with a life-threatening illness who became an inspiration for the Blues, makes several appearances along the way and, it should be noted, logs substantially more airtime than Jon Hamm, the actor from St. Louis who was along for much of the fun.

Condensing 82 regular-season games and 26 playoff games into just over an hour, while mixing in interviews, locker room shots and on-ice audio, requires some finagling. (And some speed; producer Tim O’Brien had to put it all together by early July, about two weeks after the team’s victory parade.) But it’s the changing nature of the highlight video, like the changing nature of the newspaper game story, that makes videos like this different from what it would have looked like in 1984.

“One of the things I think that has dramatically increased is our access to the locker room, behind the scenes,” said Mayer, who has the title of NHL chief content officer and executive vice president. “We try to include as much as we can. The feeling for sound, the players on the ice where you can hear their emotions, their conversations, those are places DVDs have certainly changed. In the day, they were highlight videos, with goals and great moments. Now we can tell stories. Our cameras are there for all the amazing moments. And there were quite a few moments throughout the year to document.”

The interviews in the video were done over several days after the team got back to St. Louis after winning the title — sharp-eyed viewers might note that Pat Maroon is clean shaven in one interview and has a full beard in others — and the video also borrows some clips from the “Quest For the Stanley Cup” series that ran during the playoffs.

But the producers had to show some discretion; while coach Craig Berube was talking to the team about running into Carl Gunnarsson in the bathroom before overtime in Game 2 of the Boston series makes it, Berube’s expletive-loaded pregame talk to his team before Game 7 didn’t. Still, Berube’s energy shows through.

You can get a feel for what these videos used to look like about halfway through. The producers dug out the NHL’s 1969 edition of the highlight film, after the team lost to Montreal in the final for the second straight season.

That film was narrated by an obscure — at least to Americans — Canadian TV host named Alex Trebek, who in praising the team’s play in the final, said, “Someday there will be a Stanley Cup victory parade in St. Louis.”

It only took 50 more years for that to come true.

Buy the Post-Dispatch book of the 2019 Stanley Cup quest

It took seven games to beat the Boston Bruins, but the St. Louis Blues have  won their first championship in its history with a score of 4-1 i…

Out for the season, the veteran defenseman is the fifth Blues player on the injured reserve list.

Gunnarsson out for season; he's fifth Blue on IR

Veteran defenseman sustained an injury to his right leg in Monday's 3-0 loss to Los Angeles.

Berube says he could be back in action at some point in the team's six-game trip that starts on Saturday in San Jose.

Defenseman Walman used at forward on fourth line against Sharks

Team finishes homestand with a 1-3 record.

Nearly one-third of the way through the season, 13 of 18 Blues games have been one-goal affairs (minus empty-net goals).

Blues notebook: MacEachern has been moving without going anywhere

The team has been bouncing him between the full roster and the taxi squad to slow down when he might have to go through waivers again.

Turnovers by Sanford in past two games have led directly to goals.

They narrowly avoided a second consecutive shutout on Wednesday, but boosting their offense is going to be a challenge with injury-stripped lineup

Blues erase three-goal defict, only to give up decisive goal in third period.

Alex Pietrangelo celebrates after the Blues won The Stanley Cup. The NHL has released a video that follows the team's journey to their 2019 championship. (NHL Original Productions)

Colton Parayko and Laila Anderson celebrate after the Blues won the Stanley Cup. The NHL has released a video that follows the team's journey to the championship. (NHL Original Productions)