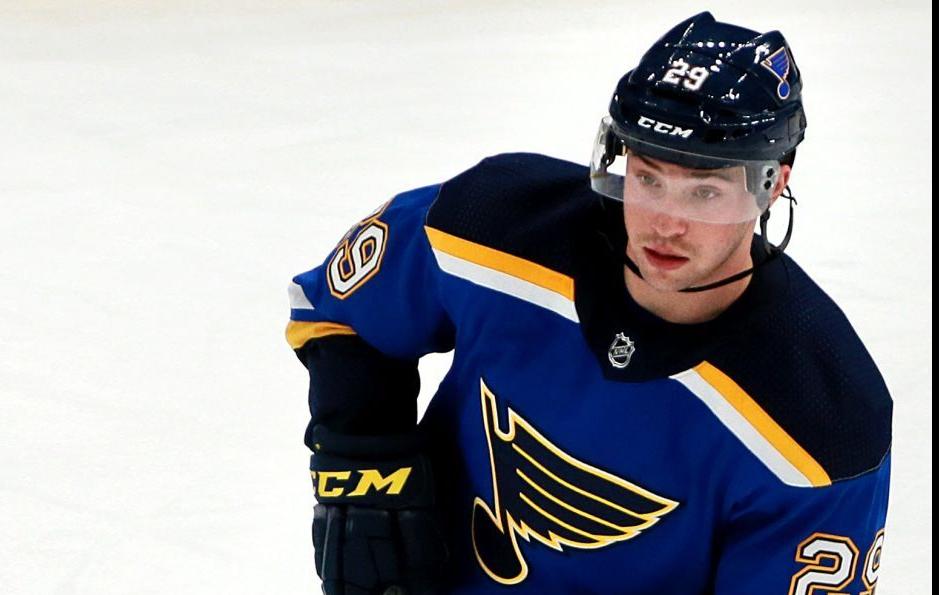 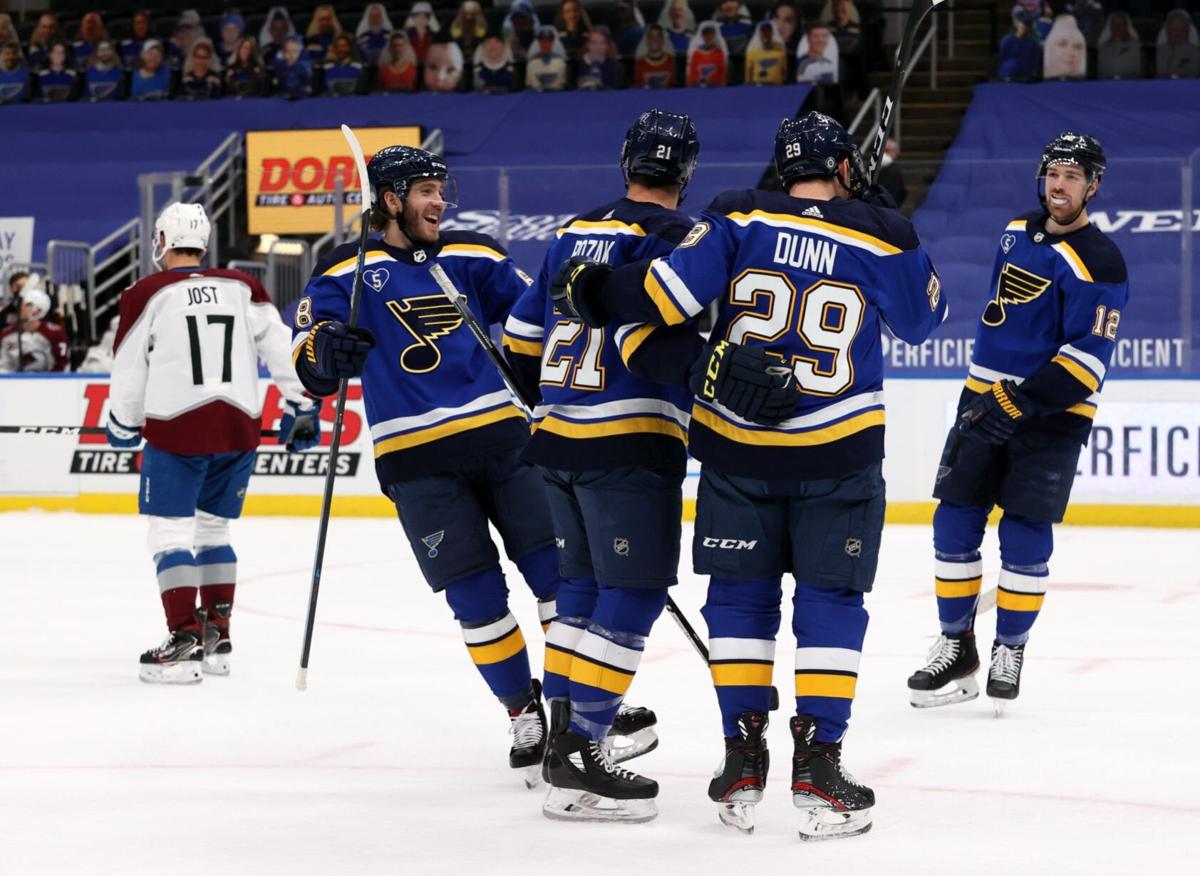 St. Louis Blues defenseman Vince Dunn (29) is congratulated on his first period goal during a game between the Colorado Avalanche and the St. Louis Blues at the Enterprise Center in St. Louis on Wednesday, April 14, 2021. Photo by David Carson, dcarson@post-dispatch.com

Starting with expansion draft, things about to get busy for Blues

What was expected for some time became a reality Wednesday night.

“With any expansion draft, you know you’re going to lose a good player,” Blues general manager Doug Armstrong said in a statement. “That’s the cost for each team of having an additional club join the league.

“We would like to wish Vince Dunn the best of luck with the Seattle Kraken.”

Dunn’s departure leaves the Blues with only two defensemen remaining from their 2018-19 Stanley Cup championship team in Colton Parayko and Robert Bortuzzo.

That’s a startling roster churn in just two seasons. But as expected, Armstrong chose to protect Parayko, Justin Faulk and Torey Krug — all players with annual salary cap hits of more than $5 million — when he turned in the team’s list of protected players to the NHL.

So Dunn was left exposed. Seattle Seahawks linebacker Bobby Wagner announced the pick on the expansion telecast on ESPN2.

Barring any offseason additions, the Blues’ D-pairings entering next season figure to be Krug-Faulk, Marco Scandella-Parayko, and either Niko Mikkola or Jake Walman paired with Bortuzzo.

The Blues have only four other defensemen under contract in the entire organization at this time in Scott Perunovich, Steven Santini, Mitch Reinke and Tyler Tucker.

Although it didn’t become official until shortly after 8 p.m. Central, Dunn became the obvious pick by a process of elimination late Wednesday morning.

The Kraken had to turn in their list of selected players to the NHL at 9 a.m. Central time.

It quickly became apparent Wednesday morning that veteran forward Jaden Schwartz would not be the Seattle choice. Sources confirmed to the Post-Dispatch an earlier report by Pierre LeBrun of The Athletic that the Kraken had talked to Schwartz during the three-day negotiating period with free agents.

But they did not reach agreement on a contract before the Wednesday deadline.

So Schwartz stayed in the free-agent pool. The Blues remain in the mix for Schwartz, but it looks very much like he will test the market July 28 when the league-wide free agency period begins.

Later Wednesday morning came a report from Frank Seravalli of the Daily Faceoff that the Kraken had not selected Vladimir Tarasenko.

So unless the Kraken had a huge surprise up their sleeve, that left Dunn as the pick. There was no huge surprise.

Dunn, who is a restricted free agent, had been the logical pick all along due to his youth, skating ability and upside. That proved to be the case even with the surprise move by Armstrong to leave Tarasenko exposed.

By early Wednesday news reports identified the likely picks of 29 of the 30 teams losing a player in the expansion draft. (The Vegas Golden Knights are exempt.)

And one by one as they were announced Wednesday night, the picks came in as reported much earlier in the day. All 30 picks.

Of the 30 players selected by the Kraken only two are age 30 or over: Calgary Flames defenseman Mark Giordano, 37, and New York Islanders forward Jordan Eberle, 31.

So to a large degree, it’s a younger, cheaper group of players.

Among the Seattle selections, three were unrestricted free agents signed during the three-day negotiating window.

Perhaps most important is the offense that Dunn gives the Kraken. He has more career goals (32) than any of the defensemen chosen by Seattle other than Giordano. And he and Giordano are the only blueliners who have scored 10 or more goals in a season.

As a restricted free agent, the Kraken hold Dunn’s rights for only the upcoming season unless they reach agreement on a multi-year deal. He made $1.875 million this past season and is arbitration eligible.

“That would be the plan,” Kraken general manager Ron Frances said when asked about getting Dunn under a longer-term contract.

“He’s a young defenseman. We think he’s got some good offensive upside, so we’re looking forward to getting a chance to work with Vince and help develop his game. And hopefully he can be a big part of our future.”

Barring a multi-year deal, other teams will be able to make offers on Dunn this offseason, but Seattle has matching rights and plenty of salary cap space to do so.

As for Tarasenko, he remains a Blue — at least for a while. There are still expected to be trade offers for him once the expansion moratorium ends at noon Thursday for the rest of the league to sign, trade, or waive players.

Dunn looks like prime candidate for Seattle in expansion draft

If he departs, that would leave Blues with only two defensemen from their Stanley Cup team of just two years ago.

After four seasons with the Blues, the 24-year-old defenseman went to Seattle in Wednesday's expansion draft.

Rangers get Sammy Blais and a second-round pick in 2022 draft from the Blues in the deal.

Blues' Armstrong gets some help in landing free-agent Saad

Schwartz goes to Seattle, Hoffman to Montreal on Day 1 of NHL free agency

Blues move up for Swedish forward in Round 3 of draft

Trade with San Jose, leaves them with only three picks on Saturday.

Without much organizational depth, Blues need to hit on as many draft picks as possible.

St. Louis Blues defenseman Vince Dunn (29) is congratulated on his first period goal during a game between the Colorado Avalanche and the St. Louis Blues at the Enterprise Center in St. Louis on Wednesday, April 14, 2021. Photo by David Carson, dcarson@post-dispatch.com